“The only movies eligible for this list must be persistent with this bodily theme, with the body horror present all the way through its entire run-time.”

What could be more frightening than your own body turning against you? We all have external fears that are expressed in the movies (monsters, murderers, war, the unknown), but for most of us, our demise will come at the hands of what’s inside our fleshy vessels. Some of us have been incredibly sick before, or at least most of us have known someone who has been incredibly sick, and it is during these times we see how utterly vulnerable and delicate our bodies are, despite us believing our bodies are mighty and impenetrable.

And so this great fear has been utilized for quite a few horror films, though as you can see from this list, most of them actually downplay the serious anxieties and elevate the joys of seeing intense and creative bodily mutilation and mutation. There are some classic moments from films that highlight the horrors of the body (the chestburster scene from Alien, the body-expanding intensity of the climax of Akira, or the moments in Eraserhead where the meaning of the title is finally revealed). But the only movies eligible for this list must be persistent with this bodily theme, with the body horror present all the way through its entire run-time.

As you’ll see from this list, all the films were at least filmed during the ‘80s, where body horror was evidently at its peak. The fear of the ever-growing AIDS/HIV virus is very likely a clear reason for this, putting into the public conscious a fear of the body suddenly succumbing to a rapid deterioration and painful death. The decade presented an idyllic façade with a very nasty undercurrent that these films seemed to present so well – despite the surface presence of our bodies showing total normality, there were the monstrosities lurking beneath that were ready to emerge.

The greatest anti-drug PSA ever created. The addictive substance at the center of Brain Damage comes from a smooth-talking other-worldly creature who injects his fluid into the brains of its willing human recipient, Brian (Rick Hearst). But he can’t just get high without reciprocating our little fellow, he must feed him with human bodies if he wants to keep getting his fix.

Such a bizarre concept actually works brilliantly as it shows the ecstasy and destruction of the addicted Brian – his highs transform his world into a gorgeous, psychedelic, technicolor wonder (despite the rudimentary visual effects), yet when he’s in withdrawal, his world descends to a disgusting and deranged hell-hole.

The first of two Frank Henenlotter films on this list, Brain Damage works astoundingly as both a goofy horror-comedy flick, yet its trashy nature only exemplifies how horrifying drug addiction can be.

Some of the messages in these kinds of films were pretty obvious and on the nose, but their grotesqueness made their critiques all the more savage – and Society certainly leads to a particularly grotesque denouement.

Portraying ‘high society’ as something to be hugely suspicious of, Bill believes his wealthy parents are hiding from him some sexually perverse and even murderous secrets. It’s up to him and his classmates, who are equally suspicious, to find out the truth, despite all the conspiracy theories and mysterious “accidents” that may befall them.

This ultimately leads to a climax sequence of orgiastic human flesh-bags melding, merging, stretching, swapping, and dripping flesh between one another, and it’s this scene alone that probably makes this film win the Most Latex Award in this list. Society’s main message can be conveyed simply as “fuck the rich”, though it’s in the totally over-the-top and bananas way it puts forth this simple message that really does show that when it comes to a society, we sure do live in one. 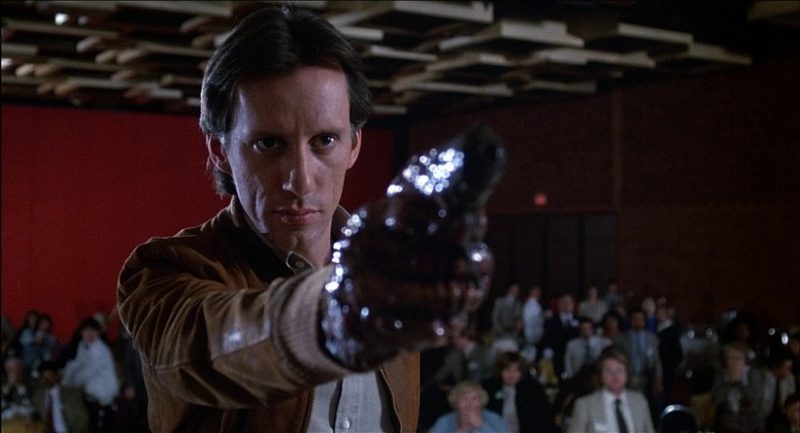 Here’s an insane, revolutionary, and prophetic sci-fi social satire that only David Cronenberg had the mutilated balls to make. Back in the day of underground UHF broadcasts, Max discovers one showing such extremities that’d never been broadcast before. His voyage to find its creator leads him through a series of bizarre, body-altering hallucinations (?), the most famous of which shows him pulling a gun from his open torso.

This portrayal of unlimited cable television and video access did eventually became a reality, though through what we now have as the internet (studies are yet to prove what it does to our body, but we have an inkling as to what it’s doing to our minds). Cronenberg is one of the kings of body horror, with The Fly as well also being a must-watch for fans of this sub-genre. That film may have a bit more of a cultural reverberance, but Videodrome is clearly the more complex, more mysterious, and far more socially revealing film with a more gleefully dangerous feeling. 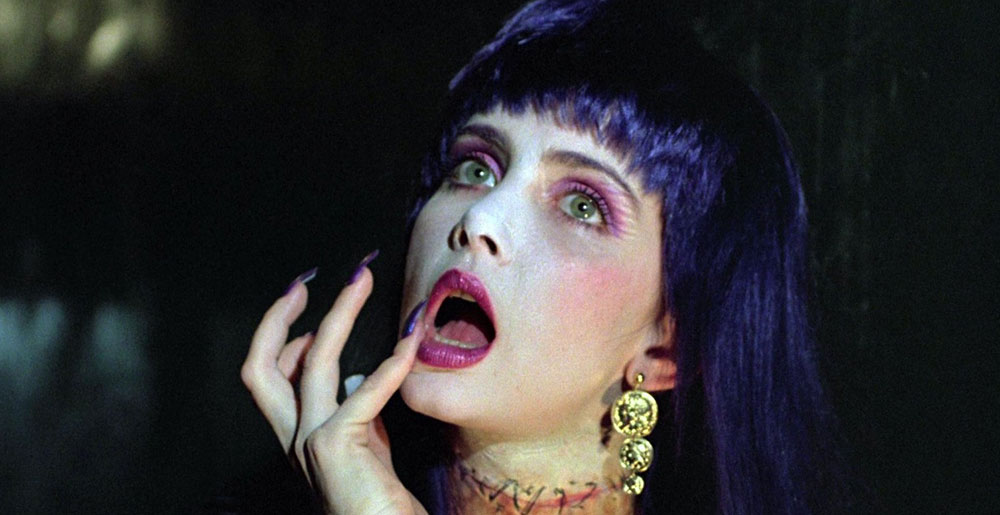 The best adaptation of the classic Mary Shelley novel, though I bet she couldn’t have predicted how her story would be translated, transfigured, and brilliantly bastardized into the new tale it has here. Jeffrey’s birthday present to his fiancée, a self-driving lawnmower (his own invention), goes haywire when it runs her over and kills her – it’s a prologue scene like this, with its earnestness in its ridiculousness, that sets up the tone of the film, as well as the story.

Jeffrey is devoured by guilt and remorse, but he also begins a determined experiment to bring back his beloved, as he secretly kept her head and other severed body parts. But his devotion becomes so desperate, he convinces himself to kill and mutilate women so he can take their body parts to make up the remainder of his fiancée project – so he visits a brothel.

And it’s here that this strange goofy film actually goes deep into Jeffrey’s devotion, yet bodily objectification of her, as well as his regard for women’s body parts that are seemingly interchangeable between them. There’s more than a handful of crazy plot-points like this stringing this tale of resurrection together, most of which also work as an excuse to show off some admittedly cheesy, yet still joyous visual effects showing a barrage of bodily destruction (and reconstitution). 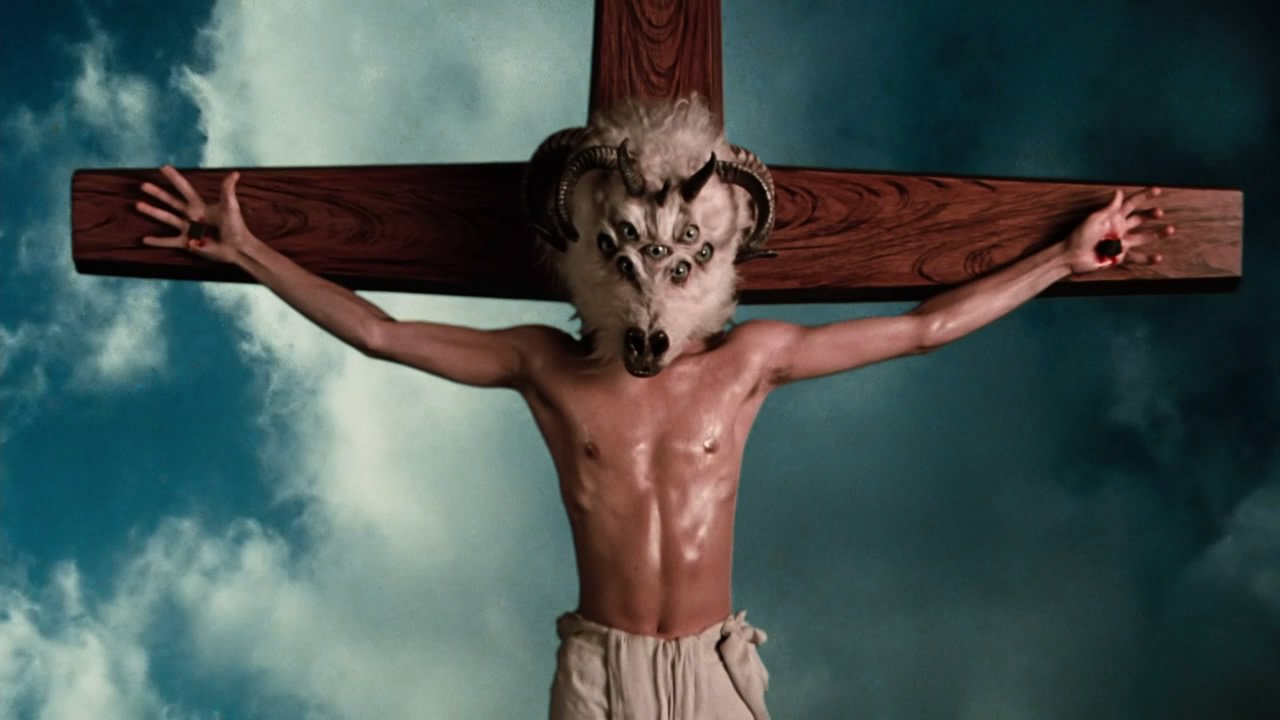 There’s likely no other film that has taken so seriously the esoteric studies of hallucinations brought on by psychedelics and isolation chambers. It’s clear from this initially very talkative film how involved it is in these experiments (based on the work of John C. Lilly), that show psychopathologist, Edward Jessup, chasing the religious iconography of his hallucinations, his past memories incorporated in them, and experiencing the emotional narrative of these states.

These hallucinations are shown here in some of the most intense (and most parodied) hallucination scenes in film history, with no better director than Ken Russell to convey the crazed nature of such sequences. But it’s when Edward takes Central American ayahuasca within the isolation chamber that these experiments begin to warp not just his mind, but his body as well, making him genetically regress, later transforming into something supernatural and amorphous.

Although what little study that has been done on psychedelic transmutation claims there’s nothing to substantiate its existence, Altered States uses this concept to seriously examine the experiences and fascinations with mind (and body) expanding psychedelic experiences, but mixes this seriousness with a sense of fun, showing Edward’s Neanderthal form rampaging through a zoo, as well as the other-worldly body transformations he inhabits – more ‘80s visual effects here that are technically outdated, but still showcase extraordinary creativity that pummel the viewers’ senses.

There could be no other number one. The fear of losing your body and your identity has never been captured so brilliantly by a film, and it was a genre film at that. Meant for a blockbuster audience in the early ‘80s, though landing with a thud, The Thing is a film that is so purely enjoyable and so revealing of what makes up our bodily organism (and how it can be so horrifically transmuted). It’s not only the incredibly gruey, gory, and gleefully imaginative effects that have blown away viewers over the decades, but also the varying reactions of the characters when a catastrophe impedes on not just one community, but the whole world at large.

There’s a great satisfaction in seeing these twelve men navigate their way through dealing with this monster, who could be any one of them. Characters in horror films often act stupidly as it makes it easier to connect plot points (particularly in slasher films, most of which are written so characters usually just walk right into their own deaths). The Thing is a rare kind of horror film that acts out on intelligent brain-storming and planning of these men, as well as the varying psychological reactions.

Hated upon release in the early ‘80s and now a cult monolith in the sci-fi and horror genres, the appeal in The Thing is the creative freedom its monster design so brilliantly goes for, as well as its taut slasher narrative that pits these untrusting men against each other, always questioning who’s really who. The Thing, perhaps more than any other film, makes us look at our bodies (and, if were possible, look within).

Halloween in the Harry Potter Films