In an industry where actors come and go in a blink of an eye, Helena Bonham Carter has remained relevant for over four decades now. With her breakthrough performance in ‘The Room with a View’ about 36 years ago, she made a spot for herself in Hollywood which only kept on meriting her mettle upwards and onwards. Gen X know her from the royal ‘Lady Jane’, the Millennials from ‘Charlie and the Chocolate Factory’, and the younger Gen Z lot as Bellatrix Lestrange from the Harry Potter franchise. There is no telling the caliber, potency, and acting prowess of this superhouse of talent.

Boasting a plethora of adaptation films in her kitty ranging between Shakespearean plays, Caroll’s tales, and other period stories, there has always been an edge to the characters she has picked and the roles she has played. All of her characters have a certain weight about them which may or may not have a major screen presence but they sure are integral to the primary plot. Her filmography is not just brilliant but is also extremely diverse in terms of genre and character depiction- she has played historic figures, sadistic antagonists, musical leads, and naive and ignorant heroines, in addition to giving her voice in several animated movies. She is not just an actress, she is a league of her own, a force to be reckoned with, and an icon that must be appreciated much more often than she is now. 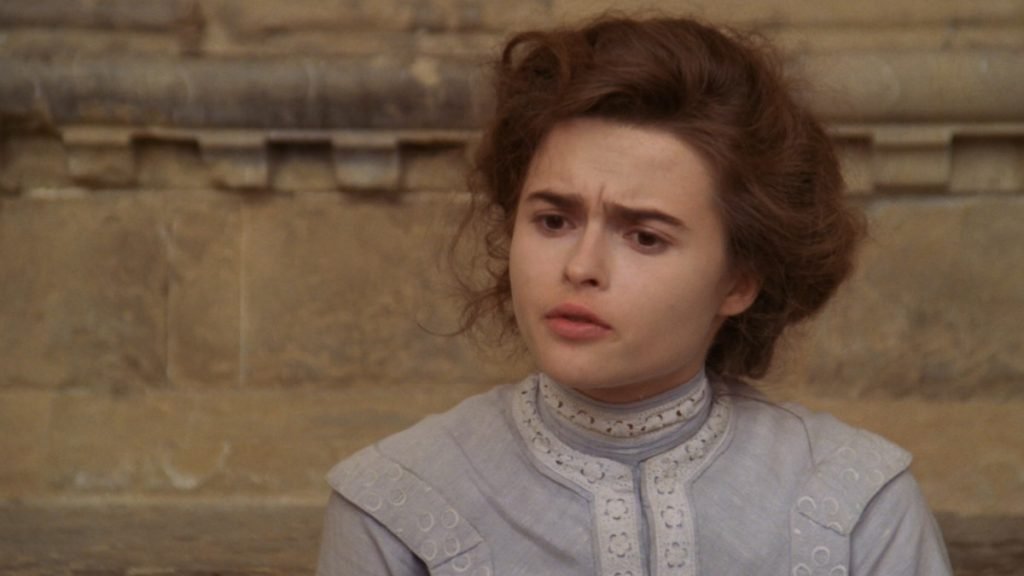 The first on our list is also Helena’s first major movie breakthrough where she played a 19-something years young, English girl- Lucy Honeychurch. An adaptation of E.M. Forster’s novel of the same name, the movie was released in 1985 but is set in the Edwardian century. Lucy Honeychurch (played by Helena Bonham Carter) goes for a holiday in Florence with her spinster cousin and chaperone Charlotte. While vacationing, she meets and falls in love with a certain George. But soon after, she is expected to return to England and is engaged to a different man before the climax twist happens.

The film was received with universal acclaim and Carter was showered with accolades. Not only did she perfectly fit the bill for Forster’s heroine- “a young lady with a quantity of dark hair and a very pretty, pale, undeveloped face”, she also elevated the character with her nuanced acting, her demure expressions and proved her grit considering she was only 19 years old at the time. Needless to say, there has been no looking back ever since. 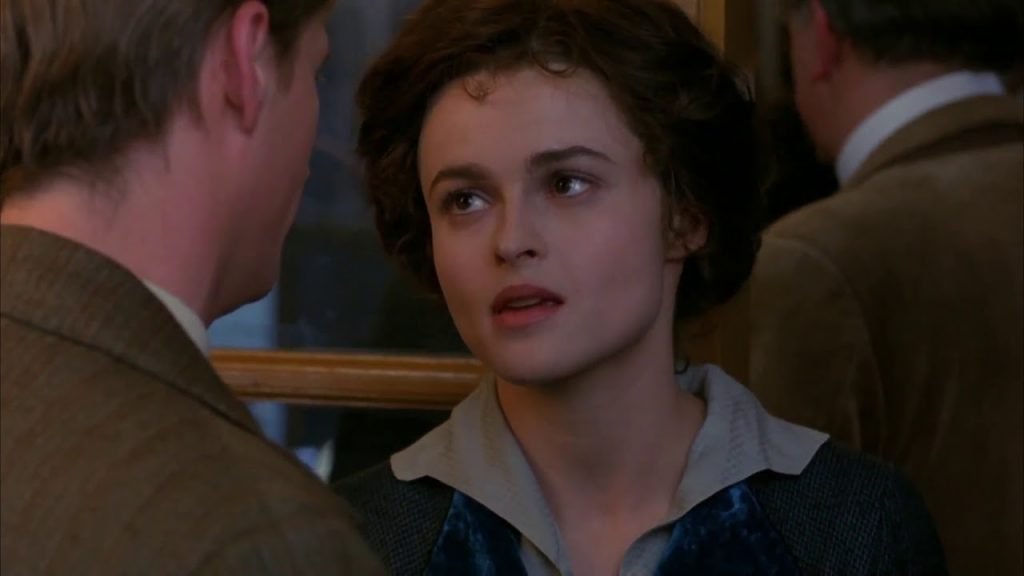 Another one of Carter’s masterpieces, ‘The Wings of the Dove’ is also an adaptation of a novel of the same name by Henry James. The film is the story of Kate Troy (played by Helena Bonham Carter) who is a poor, tenuous girl placed in the care of her strict Aunt Maude. While she is secretly in love with an impoverished journalist, she is expected to marry a rich bureaucrat so that she is saved from the same doomed destiny of her deceased mother. To escape this plight and unite with her lover, she plots a selfish scheme that involves exploiting a young girl Milly. Together, the couple did manage to rob Milly of her feelings and her wealth for their own good, but did they get their way? (No spoilers here, you can find out yourself.)

It is not easy to play a selfish, conniving, and heartless character and still receive empathy for the same. But Helena is not just another somebody we are talking about. Not only did she play the master manipulator role with conviction but she also evoked such emotions in the viewers through her flawless, multi-layered acting that her evil ways could even pass for pragmatism. Rightly so, she received a nomination for the Academy Awards for the same. 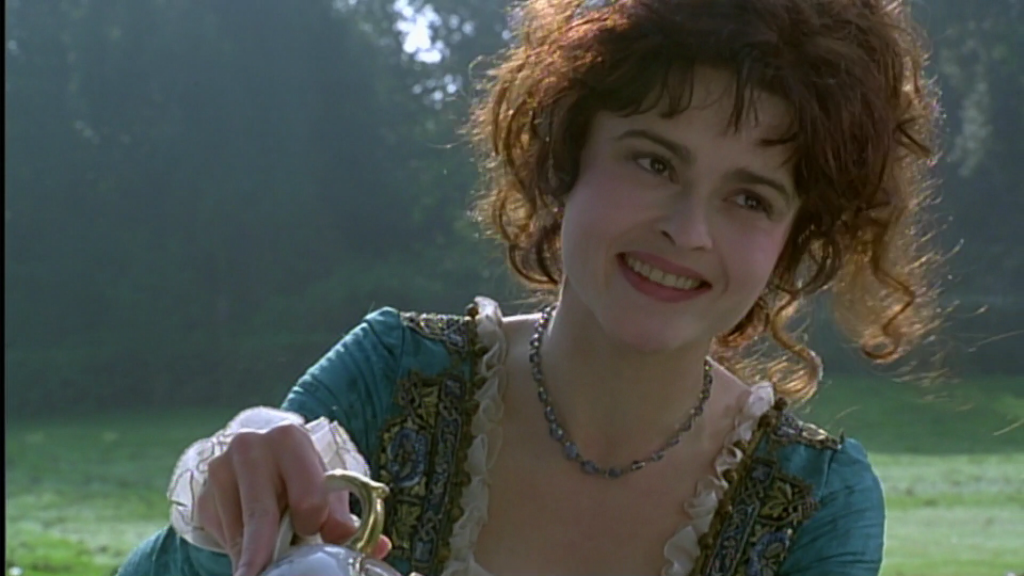 Twelfth Night is a 1996 film based on the Shakespearean play ‘Twelfth Night or What You Will’, which has an all-star cast. The film follows the story of Viola and Sebastian (two identical twins- brother and sister) who get lost in the sea after their ship crashes during a voyage. Viola dons the persona of Sebastian to join the Duke’s court as a survival tactic. Through her time in the court, she realizes her master’s longing for Countess Olivia and is instructed to court her for her Duke. But Olivia is mourning her brother’s death and is apparently not at all interested in the Duke. However, the twist comes when she falls for Viola herself (dressed as Sebastian) who visits her frequently on behalf of her master.

Helena plays the role with such precision that you will mourn with her in her mourning and weep with her at the loss of not receiving love back. Carter gives an eye-catching performance as Olivia in the romantic comedy and outshines the other characters owing to her incredible acting prowess. Ocean’s Eight is one of Carter’s latest releases, directed by Gary Ross. Boasting a star-studded, all-female cast, Helena Bonham Carter plays the genius but bankrupt fashion designer Rose Weil. The gifted artist is recruited by Debbie Ocean (Sandra Bullock) as part of a high-end jewel heist. The film is a Hollywood commercial, and big-budget, which is very different from the usual filmography of the actress’s record. Regardless, she aces the role of Rose Weil and makes us fall in love with her a little more (if that was even possible).

In a mixed pool of young stellar actresses like Sandra Bullock, Rihanna, Mindy Kaling, Anne Hathaway, and Cate Blanchette, Helena Bonham Carter gave one of the most memorable performances as an emotionally fragile but super skilled designer. 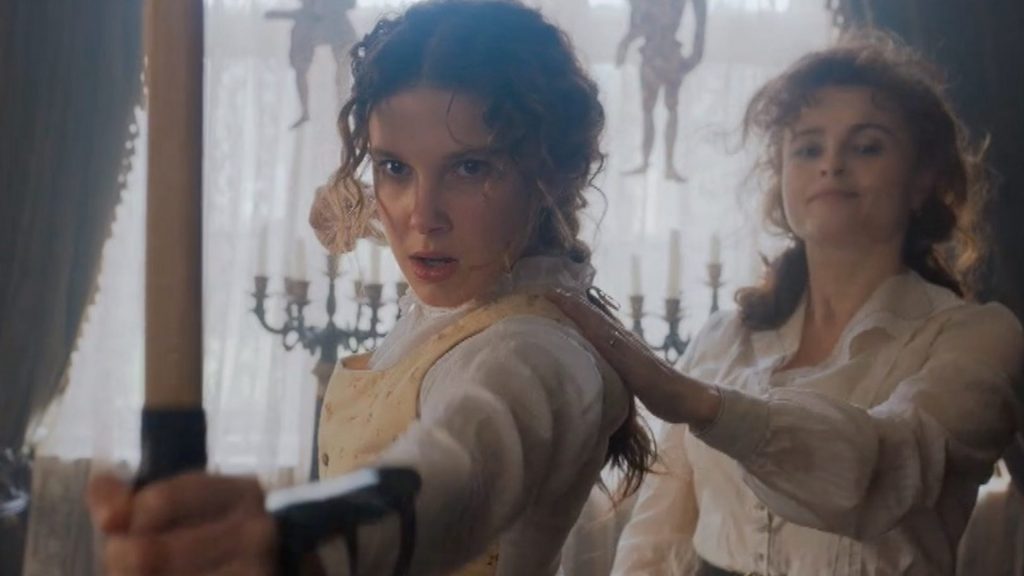 Helena Bonham Carter’s Eudoria in Enola Holmes might not have a lot of screen presence but the entire story plot revolved around her character- why did she disappear, where she was, and what were her next steps. Here she played the mother to Enola (Millie Bobby Brown) which was very different from the conventional mothers that we see on screen (also different from her character in Charlie and the Chocolate Factory). Eudoria was brilliant, head-strong, and a leader- she knew the arts and the martial arts, and she inculcated all of those skills in her daughter before she decided to go her own way.

Carter slipped into Eudoria’s character like a glove- there was not a moment throughout the film where she did not justify the role of a mother which was as physical as it was emotional. The film also has the special element of breaking the fourth wall which Carter performs with much conviction and further persuades her viewers of her artistry and confidence. 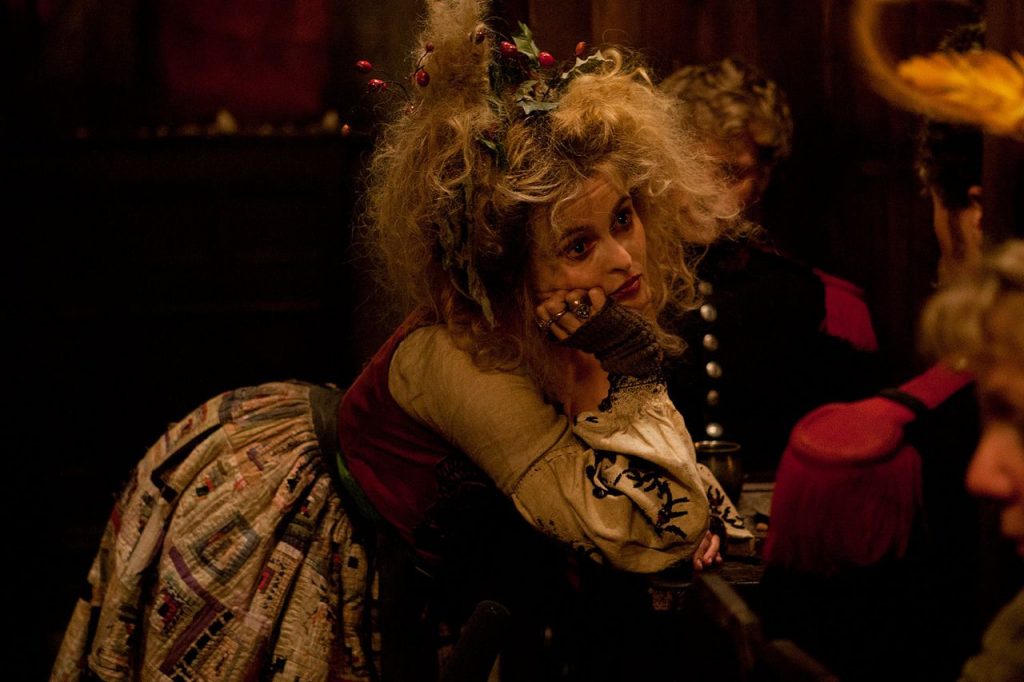 Touted as an iconic musical of all time and an exceptional piece of theater, Les Miserables has been adapted several times in several different versions and is based on the French historical novel by Victor Hugo. This one here, however, had a much-delayed production and rights purchasing process and was finally released in two phases in the US in December 2012. Set during the 19th-century uprising of France, also known as the June Rebellion, the film follows the life and fate of one Jean Valjean as a paroled prisoner who later goes undercover and becomes a successful factory owner. A coming-of-age tale, the film has a plethora of highs and lows and brims with outstanding musical performances both by the cast and the singers.

Carter plays the role of evil Madame Thénardier- wife of innkeeper Monsieur Thénardier who loves to mistreat the young Cosette (naive orphan protagonist). The film got a mixed reception, however, Helena’s role was received with much appreciation and accolades. She not only aced the sadistic antagonist but also outshone most other fellow actors. Sweeney Todd: The Demon Barber of Fleet Street is a macabre and morbid slasher musical that casts Johnny Depp (as Sweeney Todd) and Helena Bonham Carter (as Mrs. Lovette) in leading roles. Todd is a serial killer cum barber who has pledged to avenge the world as a response to his false accusation and exile to Australia. He is assisted in his heinous, hair-raising crime by Mrs. Lovette who runs a meat pie shop below his salon. Together, they plot to kill everyone who comes to the shop, dump the body downstairs through a secret passageway in the rigged barber chair, and later Mrs. Lovette converts the dead bodies into meat pies for customers. Nauseatingly scary, right?

Well, the film grossed the box-office records and bagged itself three Oscar nominations, and won several other prestigious awards. Helena plays the dark-eyed, grim, and persistent ally to Todd who desires and dreams of winning over him someday. Sallow, disheveled, and brilliant, Carter justified Mrs. Lovette’s role and outdid herself, making it one of her most remarkable and brave performances to date. 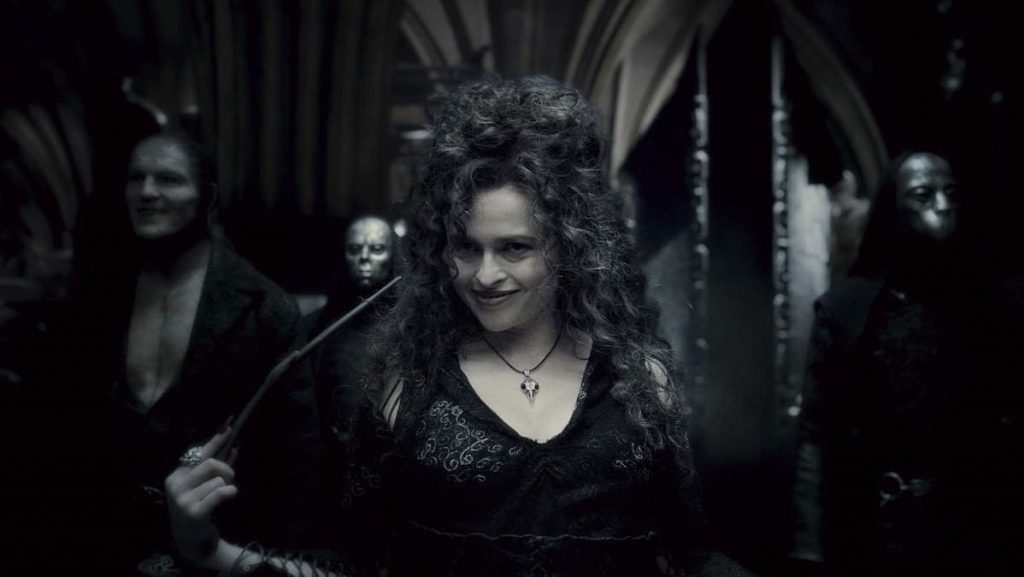 A bat-shit crazy killer (of Sirius Black and Dobby), a scary femme fatale, an insane and unhinged character- Carter made Bellatrix her own. And how! So much so, that we cannot even imagine anyone else as the character. As Lestrange, she keeps her viewers on the edge and frightened of the next move. Despite this, we almost mourned her death even when she was a sadistic, remorseless antagonist.

The second best Carter film to add to this list is the Alice in Wonderland series where Helena unapologetically plays the character of the evil Red Queen. With a massive head, a shrill (almost piercing the eardrum) voice, and mannerisms that could irritate the shit out of anyone, Carter mastered the character almost overshadowing Hathaway’s performance (which also is amazing) by her quintessential virtuoso. Both the films are inspired and re-imagined from Lewis Caroll’s work- are part fantasy, part reality, and heavily use animations and CGI techniques for production.

Helena plays the antagonist Red Queen who is always considered second to her prettier sister White Queen (Anne Hathaway), both by their parents and the people of the kingdom. The part is difficult to play as it requires frequent outbursts of rage, a sadistic temperament of mind, and an overall black shade of character. Needless to say, Carter’s Red Queen was scene-breaking, effortless, and imbibed with incredible panache. 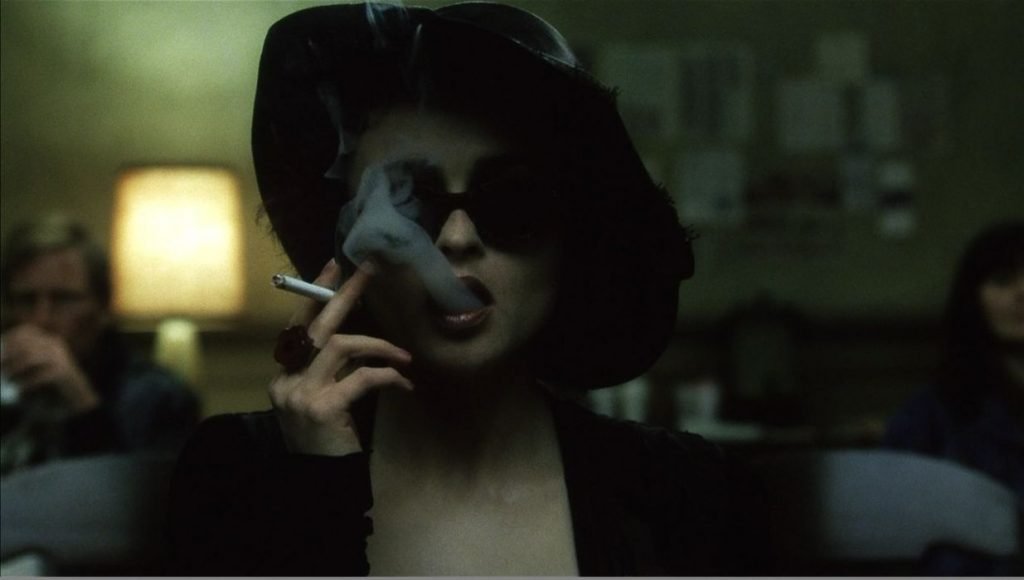 Finally, we have reached the end of this list and what better film to rank the best than our very old, cult-classic- Fight Club. From the very first time we set eyes on Marla Singer (played by Helena Bonham Carter) at Ed Norton’s support group meetings, we know that she is going to stir a storm like no one else. The film is about Ed Norton (insomniac) who partners with Tyler Durden (Brad Pitt) to create the titular Fight Club. Not only does Marla Singer remain an integral point in the plot as she sways between the two leads, but she also manages to cast an outstanding impression with her chain smokes, glazed eyes, feisty persona, and minimalistic talking style.

The dark-themed film went on to break all box-office records but one thing that is still talked about is Carter’s Marla Singer. She was probably one of the few actors in the industry who could live this character with such certitude as to make it indelible and also stay unfazed despite the presence of fellow actors like Brad Pitt. Considering her entire dynamic and remarkable filmography, Marla Singer has to be her best performance to date.