The 10 Best Moments in the Harry Potter Film Series

The 10 Best Moments in the Harry Potter Film Series: Despite being almost two decades old, Harry Potter films remain the go-to films for people who grew up in the 1990s and 2000s. The characters and the films are classics and should they ever be remade, it would cause absolute anarchy. This would be primarily because of J. K. Rowling’s habit of retcon.

However, these films are all from the time before she changed the franchise for no reason whatsoever.

The films brought to life the magic printed in the books. The films served as a reason that many children all over the world began dreaming of the fictional prospect of receiving a letter as 11-year-olds.

Harry Potter films have multiple iconic moments. The ones that come to mind include duels (yes, obviously), heart-warming moments, and moments that serve as a catharsis to millions of fans all over the globe.

Here is my pick for the best moments in the Harry Potter film series.

Harry Potter and the Order of the Phoenix (2007) 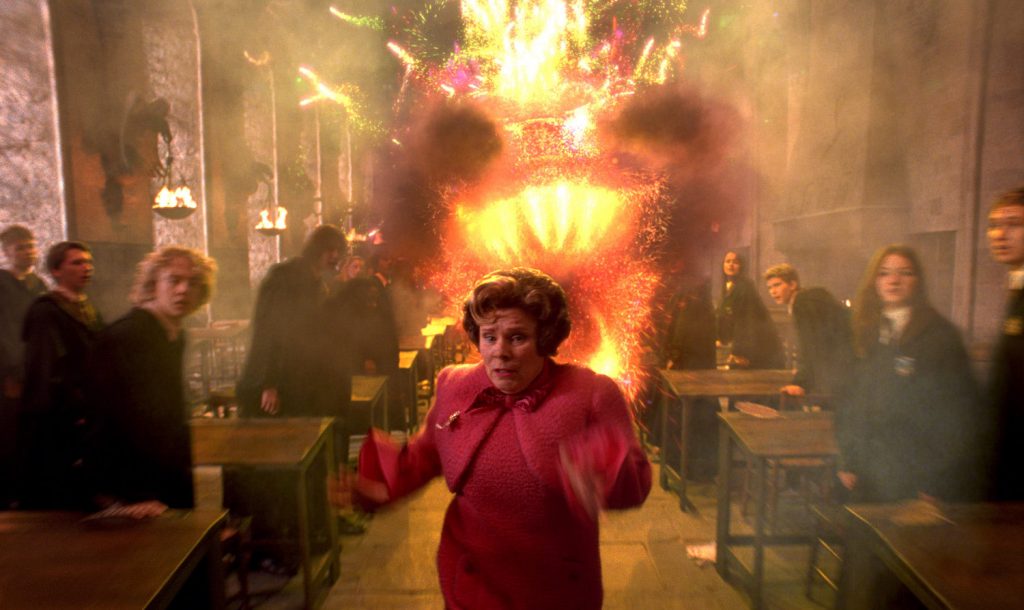 Dolores Umbridge makes Hogwarts a true boarding school in terms of the definitions associated with it. A strict place where fun is forbidden. She takes away everything that makes Hogwarts as Hogwarts and hangs up decree after decree just outside The Great Hall.

The students, resigned to their fate after the DA gets busted, just exist. However, as they write their OWLs, the troublemakers in chief fly in and provide the characters in the film (with the exception of Filch and Umbridge) and the millions of Potterheads the source for catharsis.

A firework display in the Great Hall itself. How well do you remember this scene?

Harry Potter and the Philosopher’s Stone (2001) 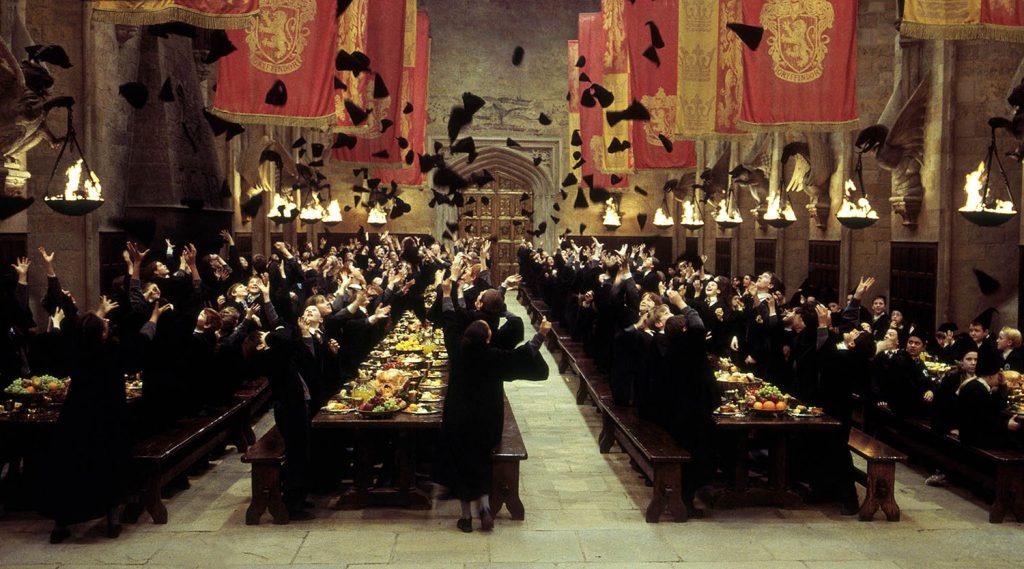 Following the heroics beneath the school, the scene would have been rather subdued for the trio had Slytherin won the House Cup.

The moment Dumbledore says he has a few last-minute points, the Gryffindor tables’ interest piques. At this point, John Williams’ art comes to the fore and elevates the scene.

Gryffindor gains 160 points and ties Slytherin. They realize the same and the hall is abuzz.

When Neville gets 10 points, the celebrations are a sight to behold. I love the moment where they throw their hats into the air in delight at having ended the year triumphantly. Those feel-good moments are what retained the fan base for the darker moments that were set to come over the next decade.

Harry Potter and the Prisoner of Azkaban (2004) 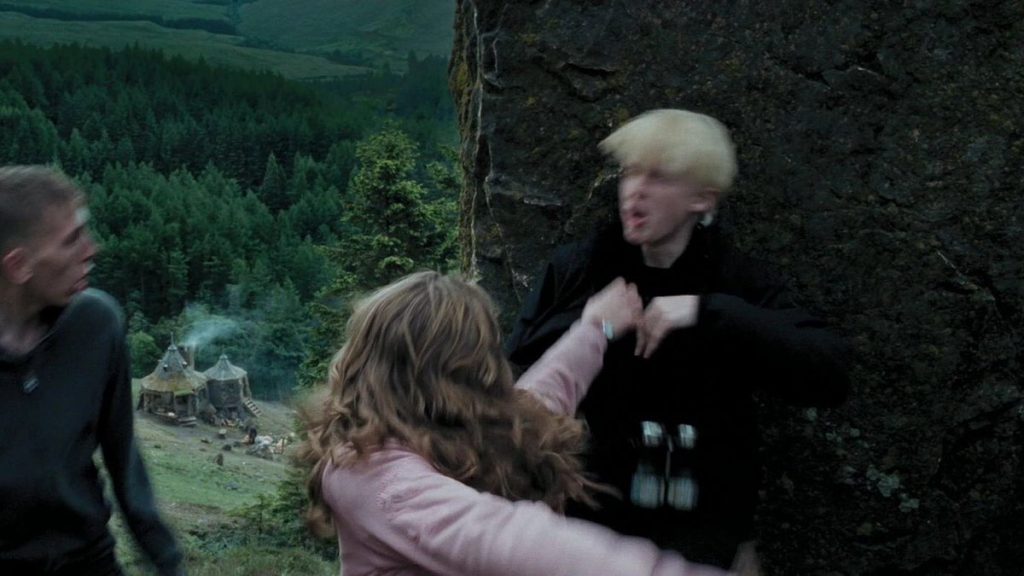 Malfoy is the cause of a bunch of events in ‘Harry Potter and the Prisoner of Azkaban’. The most serious of which is his insistence to disrupt Hagrid’s class due to which Buckbeak attacks him. Consequently, the Hippogriff is labelled dangerous and sentenced to death. It’s quite a reflection of another character in the film who gets unjustly sentenced.

As the trio head to Hagrid’s house, they spot Malfoy and his friends treating the execution as a spectacle. His joyously inviting them over is the last straw.

Hermione draws a wand and has Malfoy at her mercy. Then, as she withdraws it, it’s such a brainy attack. Malfoy relaxes, and then she punches him when he wasn’t even expecting it. Given his actions in the film, it surely was an apt treatment for that, “foul, loathsome, lying evil little cockroach”. And yes, it did feel brilliant.

Harry Potter and the Chamber of Secrets (2002) 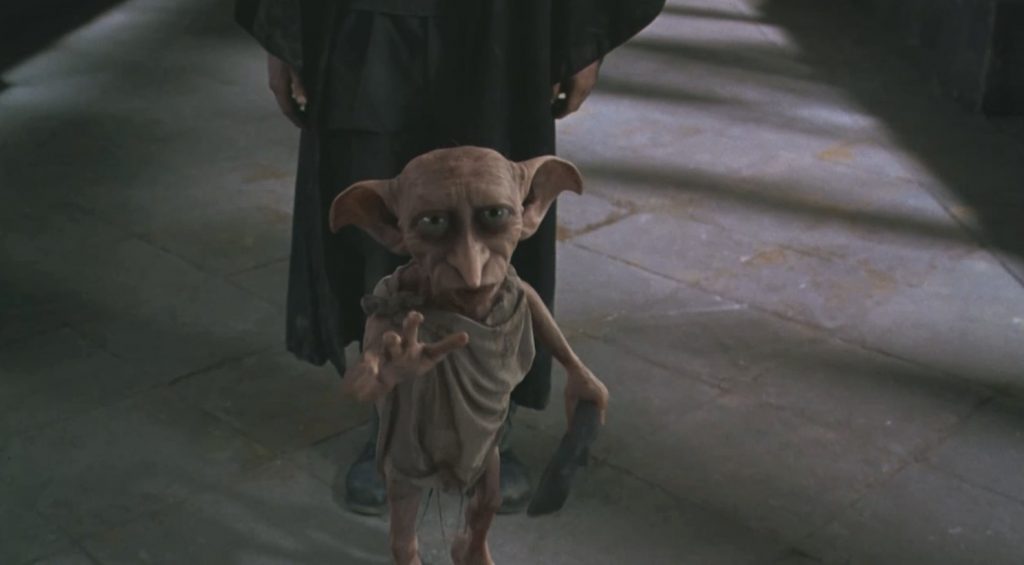 Dobby is presented as a pitiful character with a golden heart. His attire and bouts of self-punishment reek of servitude and slavery. That’s the definition of a house-elf in the general sense. However, Harry sees a loophole and trusts the wizard to be the wizard.

He hands a book to Lucius Malfoy, who in turn bestows it to Dobby.

As Dobby opens the book, he sees the sock and realizes what just happened. Subsequently, he utters the now-iconic words, “Dobby is free”. Now free from all bonds, Dobby unleashes his wrath on Lucius. He sends him flying through the air and leaves him sprawled on the floor.

The line, “You shall go now, you shall not harm Harry Potter,” is delightful to hear.

Harry Potter and the Philosopher’s Stone (2001)

Audiences are introduced to Harry Potter as a baby, and then we fast forward almost a decade. He wears oversized clothes and seems to have resigned to the fate of just existing. Existing in a world that is not his. But he just doesn’t know that.

Soon a barrage of letters arrives, and the protagonist is euphoric. He just wants to pluck one out of the air.

All in all, the family moves to a place called The-Hut-On-The-Rock. And it is here that the magic begins.

Harry’s birthday surprise results in him realizing the truth. The line, “Yer a wizard” is what is Potter’s and the viewer’s ticket into the wizarding world. It provides Harry with an opening that he is not a run-of-the-mill normal being that the Dursleys desired him to be.

Well, this line is just the prefix. Dudley’s tail also gives us a glimpse of what Harry would soon be capable of doing.

Harry Potter and the Order of the Phoenix (2007) 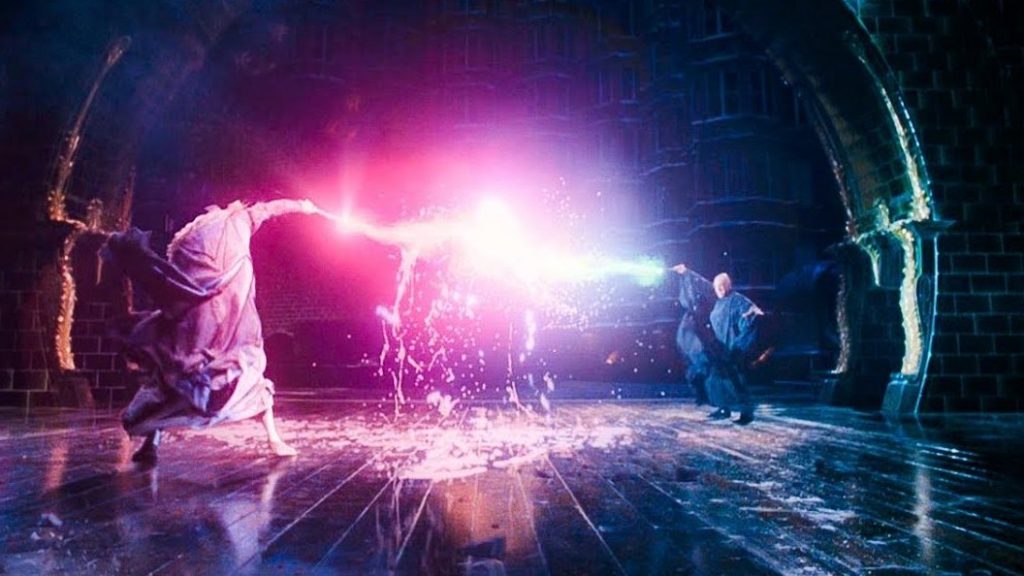 Albus Dumbledore was constantly regarded as the only Wizard Lord Voldemort feared. The audience waited with bated breath as the fifth movie hacked off huge chunks of the 765-page book to fit into a reasonable time limit. That movie should have had two parts.

As Harry, fueled with rage, sprinted to catch Sirius Black’s assassin, he was outnumbered. Voldemort and Bellatrix vs Harry Potter was not a duel to dream for.

At this point, Dumbledore showed up. The scene used special effects well to capture the intensity of the battle. As sparks flew and the wind gusted all over the Atrium, there was a slight hint that age had finally caught up with the Headmaster.

He looked scared apart from the time he used the water spell and was in control. This was contrasted by Ralph Fiennes’ intensity and delight in the glass attack and the fire attack, respectively.

Whilst in the book, this isn’t as prominent, it serves as the final good moment of the film in the present day. The flight through the school was just stupid. Also, Harry breaking the Elder Wand was absolutely uncalled for.

As Harry is ‘dead’, Voldemort and the Death Eaters march into the school. The leader gleefully informs the defenders of Hogwarts about the same. Certain combatants, including the infallible Minerva McGonagall, are shell-shocked. However, Neville accepts Voldemort’s call to move forward and shows the world why he was a Gryffindor.

His speech is the catalyst to help bring about the end of The Dark Lord. It spurs the defenders whilst the dark forces flee.

It is this incredible speech accompanied by an uplifting Alexandre Desplat score that sets the ball rolling. Neville’s courage provides the second wind to the battle. If one of their own can have that sort of courage. Why not all of us? 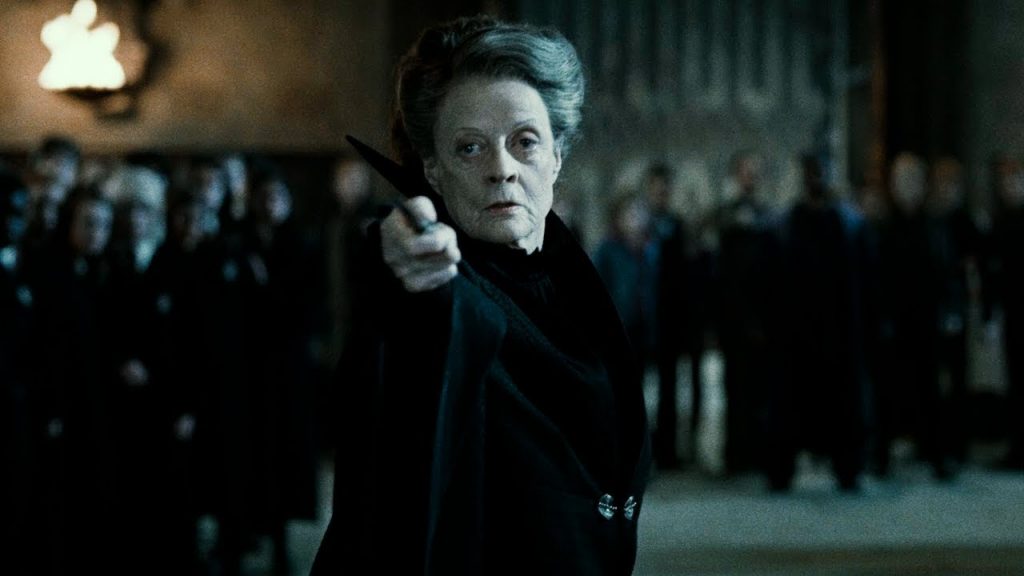 Severus Snape and the Carrows had made Hogwarts into a military school, with the students constantly marching around in perfect formation. The same holds when Snape summons them to the Great Hall to find Harry Potter.

Following Snape’s classic monologue, Harry steps out and then the Order of the Phoenix walks in. However, they are too far behind as the Headmaster draws his wand. I still remember the way the cinema hall erupted with cheers as McGonagall stepped forward.

What’s noticeable is that when Snape raises his wand, there were a few gasps, but once the Transfiguration teacher raised her wand, the students scuttled aside.

The eerie background score helped build the tension as McGonagall cast Fiendfyre after Fiendfyre and met no offence in return. The skilled Snape deflected the blows, gave hints in retrospect about his allegiance, did his part, and fled the scene. This set the tempo for the final battle, as book fans would be aware of McGonagall as a dueler. But this scene showed that Hogwarts’ defenders had some extremely skilled power, and the final few minutes of the series would be a visual and awe-inducing delight. 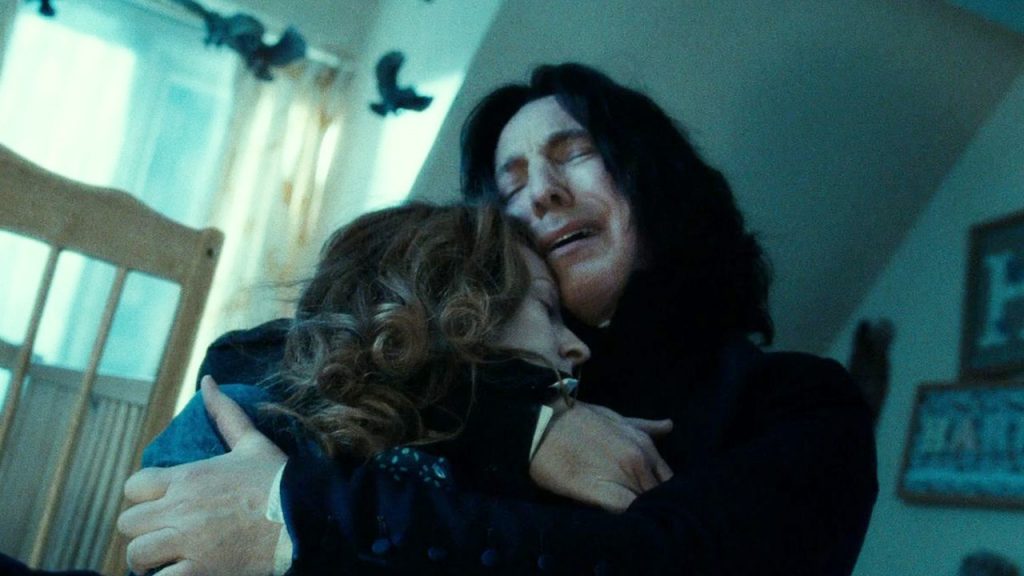 It goes without saying that one of the best moments in the Harry Potter series is the revelation of Severus Snape. Severus Snape had been vilified for seven movies. There were subtle hints, but Alan Rickman played his part so well that there was no conclusive proof that he was either good or bad.

He is killed due to Voldemort’s lack of knowledge, and then he hands Harry his memories. This is the revelation of the truth.

Snape’s allegiance comes to the fore. We see the turn, the reason he was that way for seven films. We get the reasons as to why he committed murder atop the astronomy tower.

And then we see the nature of the man and his motivations. As he unveils his Patronus, the truth hits the audience like a ton of bricks. “After all this time”, “Always”.

And he didn’t even want the credit for it.

Harry Potter and the Chamber of Secrets (2002)

This scene comprises two moments that are just magical. The first one is Hermione’s ‘unpetrification’. Viewers get to see the protagonists’ resolve tested as they enter the forest and jump into the unknown, all to find answers, rescue their friends and along the way get back at what immobilized their friend.

The scene is a classic Christopher Columbus one as it is light-hearted, warm, and also serves as the last non-dark scene for a while in the franchise. Accompanied by Academy Award Winner John Williams ‘Reunion of Friends, we see Hermione back on her feet as she greets Sir Nicholas.

At this point, Harry and Ron are alerted to her presence and get off their seats as Hermione sprints and embraces Harry. The same greeting isn’t given to Ron, though, but it does set up a few questions.

The sequence symbolizes the friendship of the trio, one that played a huge role in their journey to May 2, 1998.

The scene with Hagrid too is remarkable, and it comes hot on the heels of the Reunion of Friends. Williams’ score elevates this too, as Hagrid has his name cleared after 50 years and gets appreciation from everyone around. As the camera pulls away, eagle-eyed observers will notice even Severus Snape applauding. There’s truly no Hogwarts without Hagrid.

Honourable mentions: Harry rides Buckbeak. Harry escapes from the Dursleys in the Chamber of Secrets.

Which Alice in Wonderland Movie Is Best?

The 10 Best Moments in the Harry Potter Film Series