“It’s too frightening to really go certain places, so we can only go there in the movies.”

Eraserhead is a dreadful comedy set in hellish industrial wasteland. This is the world of fear and filth, of deformed sperms and premature fetuses. Lynch’s debut feature lays the foundation for themes he would largely explore in his subsequent films. Through his films, Lynch exposes the ugliness inherent in nature and unearths our darkest emotions. He uses abstractions and distorted reality only to present the more heightened reality. He digs beneath the surface and portrays the inner self of a man who is subjected to industrial agony. It is futile to even attempt to decipher the meaning of Eraserhead since it is not only abstract but intuitive. Deep down, everyone knows what the film is about. It is simple yet indescribable.

Unlike other movies of Lynch, in Eraserhead there are no evil characters, the world itself is evil. The film opens with Henry’s pale face floating horizontally in dark space over the brain size planet. From the very first frame, Lynch transports the audience into a different world. This is the cinema of extreme where dark gets darker and strange gets stranger. The man in planet stares out of the window and operates sperm launching levers. But who is this man? The image of ‘man in the planet’ reminds me of a sketch by the legendary cartoonist Robert Crumb, in which a terrified little man lives among the web of cables. This is the vision of his subconscious, a glance into artist’s dark and disturbing world. The planet is Henry’s mind. As the movie progresses, Lynch plunges deeper into his mind. There is a house on the planet, a radiator inside the house, and in crevices of radiator lives a lady who sings beautiful songs.

With a sudden flash of light, we cut to the planet. This is the nocturnal planet of loneliness where there is no sign of life, and yet, Henry seems perplexed and petrified, as if someone is watching him from behind. Lynch uses unsettling sounds of industrial uproar, barking dogs and hissing radiator to create the atmosphere of anxiety and dread. Henry’s world is made of factories, smoke, puddles of chemicals and toxic waste; the world so mechanical that sheer existence of human is a mockery. Lynch describes Philadelphia as ‘cocoon of fear’. In Eraserhead, he unleashes the terror he experienced in that murky neighborhood. He channels his childhood trauma into art. Lynch has always been fascinated by factories. To quote him, “Factories are what’s beneath the surface, they are the unconscious, in a way. Factories get me in my soul. I feel the universe in them.”

Eraserhead operates on the relationship of contrasts, the contrast between black and white, hell and heaven, fear and hope, truth and illusion. Lynch ‘erases’ the line between dream and reality to a point where Henry’s inner psyche merges with the exterior physical world. But even in its most extreme abnormality, the world of Eraserhead seems familiar. All its absurdities stem from mundane activities such as taking a walk, carving chicken, or feeding baby. In movies of Lynch, characters often confront a threatening realm that exists underneath the façade of mundane reality. The film operates in a world with different rules. For instance, in Twin Peaks, characters in Black Lodge behave differently, they talk backwards. Here too, communication is incoherent as the characters converse with excruciating long pauses between dialogues. The unpredictability of their action creates a sense of unease.

Lynch’s first foray into moving pictures ‘Six Figures Getting Sick’ is a companion piece to Eraserhead. In this animated short, six sculpted heads and dismembered stomachs spurt out white fluid and blood to the rhythm of siren. There is sickness that prevails in the industrial atmosphere of Eraserhead. The factory workers breathe smoke. Everyone is engulfed in some sort of disease. At dinner, Mary experiences a seizure which is subdued by brushing comb. Her grandmother is comatose. Her mother experiences orgasmic spasm at the site of chicken exuding thick substance. Her father’s numb arms can’t feel a thing. Henry’s nose starts bleeding in the moment of anxiety. His hideously deformed baby is covered in spots. This hostile world can be compared to hell. At dinner, Mary’s father says, “I’ve seen this neighborhood change from pastures to the hellhole it is now!” Soon, the dinner turns into an interrogation. In a final blow, Mary’s mother asks him whether he had sexual intercourse with her daughter. And then, in a truly Lynchian scene, mother acts out of sexual hunger and forces herself on the lover of her daughter. This scene is reminiscent of Sailor’s confrontation with Lula’s mother (wicked witch) in Wild at Heart. At the end of dinner scene, Henry is forced to be a father. Just like viewers, Henry is searching for meaning, trying to make sense of this world. What he really seeks is inner peace.

Henry’s apartment is his own private hell. Elevator tests his patience, lamp shoots spark, window is clogged by a brick wall, his food spitting baby cries relentlessly. Lynch is highly influenced by the literature of Kafka. In Eraserhead, psychological state of protagonist becomes the physical aspect of the story, a motif that is apparent in Kafka’s Metamorphosis. Henry’s baby is a mere extension of his own being, a part of his self that is so hideous, he cannot accept it. The tiny seed eventually grows monstrous. It operates as an autonomous entity and takes control of his external world. As the seed grows larger, Henry’s planet shatters into particles. At this point, the outer world ceases to exist. Throughout the film, Henry faces rejection. His wife abandons him to take care of a semi-human child. The attractive woman next door leaves him in the middle of sex. The baby mocks him. He is incapable of finding solace. The only ray of hope in his dark world is the lady who lives inside the radiator.

The lady in radiator is the vision of divine. To quote Greg Olson, “In Lynch’s films, seemingly fallen souls are sometimes allowed to behold entities of heavenly grace.” Once again, comparison with Wild at Heart can be drawn. When Sailor is at his most vulnerable, the Good Witch descends from heaven and shows him the right path. The Beautiful woman offers Henry sexual immersion while Radiator lady offers the transcendence of desire. Henry is forced to choose between sexual desire and spiritual fulfillment. Lady in Radiator promises him heaven but doesn’t accept him, as if silently suggesting that he’s unworthy of heavenly bliss. In one of the most bizarre scene, Henry’s head falls off and is replaced by penis shaped head of his own deformed offspring. In order to seek salvation, Henry must suffer, he must ‘detach’ himself from the unholy planet (head) of desire, he must erase himself so that he can reincarnate as neo being. The shocking scene of Henry killing baby reminds me of a scene from another equally chaotic film ‘The Holy Mountain’, where a group of wealthy people burns their ego and identity to attain the higher spiritual realm. In the final scene of spiritual transcendence, Henry becomes one with the lady in radiator. He dissolves into blinding white light. This scene shows the children of light returning to cosmic light, the union of mortal and divine realm.

Some viewers argue that Lynch’s view of world is too cynical, that Eraserhead is obscure just for sake of it, and ultimately it’s just a frustrating experience that isn’t redeeming. But like it or hate it, there is no pretense here.  Eraserhead is Lynch’s most intimate, honest and, dare I say, autobiographical film. Which raises another question: how much of it is real? Apparently, everything. Lynch himself was a printer at La Pelle’s factory. Jennifer lynch was born with severely clubbed feet and had to endure surgeries. Her birth came as a shock to both David and Peggy who weren’t prepared for the burden of parenthood. Lynch was unfaithful to Peggy and eventually, they separated. In a way, Lynch inhabited the dark world of Henry. The only ray of hope in his dark world was transcendental meditation, which mightily helped him overcome his fear and anxiety. That is his bliss, his salvation.  In process of making Eraserhead, he embarked a new journey on the spiritual path.

Eraserhed is a doorway to Lynch’s beautiful and dark world. He knows exactly how much to reveal so that audience can have their own experience. Everybody sees different things in film, but in the end, it’s nothing more than their own reflection. Eraserhead bolsters the old Christian belief that heaven and hell are not places but states of mind. No matter how worse things are, there is always a way out. As Lynch says, “You can choose to stay in the darkness and think that’s all there is, or you can step onto the spiritual path and start coming out.”

A Synopsis of Eraserhead

If you’re reading this, you’re probably a huge fan of David Lynch. If that’s the case, I highly recommend you to check out this awesome alternate poster of ‘Eraserhead‘ created by Matt Chinn. I share this with the hope that art will reach to its intended audience. 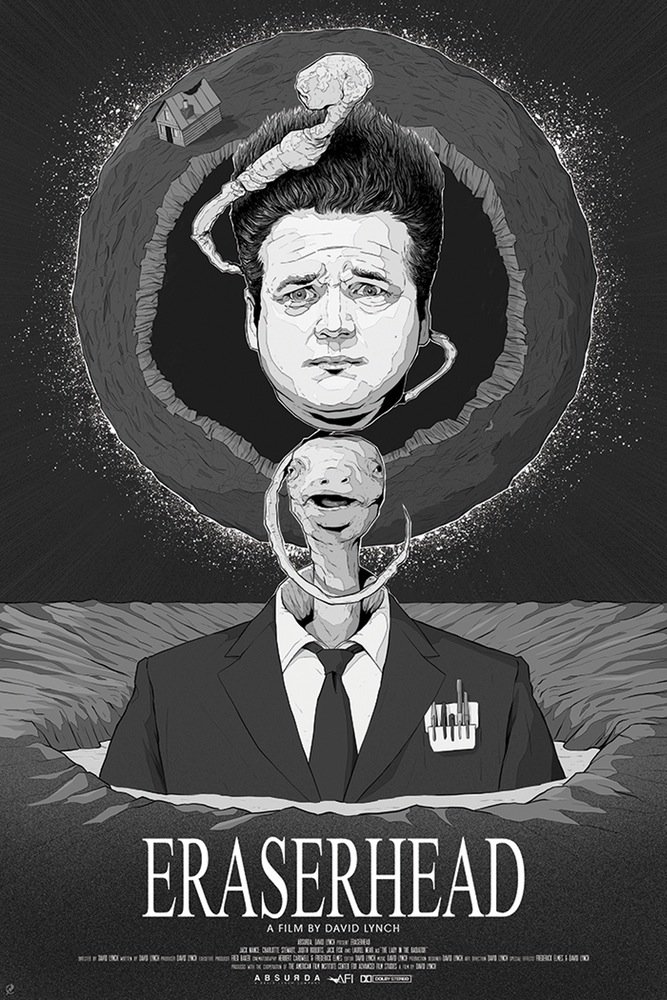 The Overrated Phenomenon: Art of bashing the Popular