Home»Articles»Doubt [2008]: A Crisis of Faith Leads to a Dissection of the Nature of Certainty
Articles/Essays

Essay on John Patrick Shanley’s directed ‘Doubt’: Since the dawn of mankind, there have been a plethora of elusive mysteries surrounding humans. The objectivity required to understand the scope and manifestation of truth has always remained out of reach. Whether it’s even possible to deduce absolutely corroborated occurrences is still unclear. Many times we get caught up in things that seem to deliberately mislead us – a meticulously constructed and carefully placed red herring. When our senses respond to stimuli in close collaboration with our thoroughly bred perceptions, the resulting cocktail is guaranteed to make our heads spin in exasperation. Belief becomes a weapon and bondage, simultaneously, as it strikes the other with suspicion and clouds the judgment of oneself. It’s at this precise moment that we learn the inevitability of uncertainty and ambiguity in our daily affairs, restructuring our entire thought process.

Doubt, directed by John Patrick Shanley, leisurely peels off the layers of such hypocrisies inherent in psychological exchanges. The plot revolves around a newly appointed priest of a Catholic church school who stands accused of inappropriate advances on a twelve-year-old African-American boy. Sister Aloysius (Meryl Streep), the school principal, makes it her mission to bury the priest with the assistance of history teacher Sister James (Amy Adams), who becomes an unwilling participant in her crusade. Race, religion and gender intersect in myriad opposing ways, which creates a murky dilemma for all the players involved. 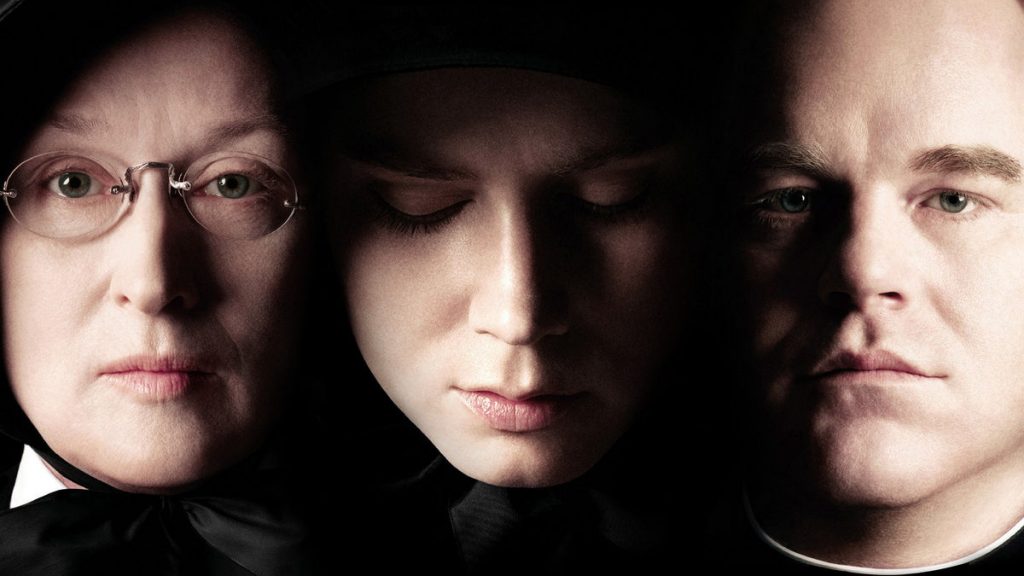 The opening sermon by Father Flynn (Philip Seymour Hoffman) sets a precedent for the subsequent allegations, spun like a spider’s web. He literally and figuratively sows the seeds of doubts in all those present by showing it as a strong adhesive that could act as a healing substance. One of the boys, William, impulsive and mischievous, remains dismissive towards Flynn. Sister Aloysius observes her from the window, like a fox strategizing to entrap its prey. Sister Aloysius is skeptical of his showmanship or “friendliness” towards the students. Her autocratic exercise of power to maintain the strict regime over students gets threatened by his benign presence. His secular credentials and reformist approach collide with her abrasive, old-fashioned orthodoxy. Her mistrust aggravates when sister James nonchalantly reveals a rendezvous he had with a student, providing her with an imperative to pursue the “supposed” assailant.  The two characters, father Flynn and Sister Aloysius, are also shown to inhabit entirely different worlds through alternately edited scenes. For instance, the lively feast of the priests headed by Father Flynn abruptly cuts to a funeral-like dinner of the nuns, underlined by a banging silence.

There are no hassle-free zones in this serpentine staircase of the giant secluded tower. Sister James acts as a stand-in for the audience, continuously swinging to and fro between two equally reasonably justified poles. The light flickers, and we lunge for answers in the dark, our limbs missing it by an inch. Both Sister Aloysius and Father Flynn try to convince sister James of their motives and righteousness while she tries to piece together pieces of the puzzle herself. Her quest for clarity is as flawed a concept as chastity, exemplified by both Flynn and Aloysius. Sister Aloysius reminds her multiple times in the movie that in order to do the work of God, we sometimes have to take the wrong path. An assertion out of the grasp of Sister James’ tender, straightforward worldview.

Meanwhile, the race and sexuality of the child further complicate the scenario. His mother (Viola Davis) is bogged down by hardship, her face oozing weariness from every pore. The boy’s father belonging to a marginalized background takes out his frustration on the boy. For her mother, the actions of Father Flynn are forgivable if it provides temporary solace to the boy. Economic prospects fuelled by a need for education in a bigoted environment are more important for her. Sister Aloysius is quick in berating the boy’s mother for being an uncaring parent, unable to understand the position she finds herself in. Father Flynn is an angelic figure in that family’s life, a place for shelter from the storm. Without any proof, the boy’s mother is unwilling to tarnish her son’s bond, knowing that he may be homosexual and their relationship questionable. 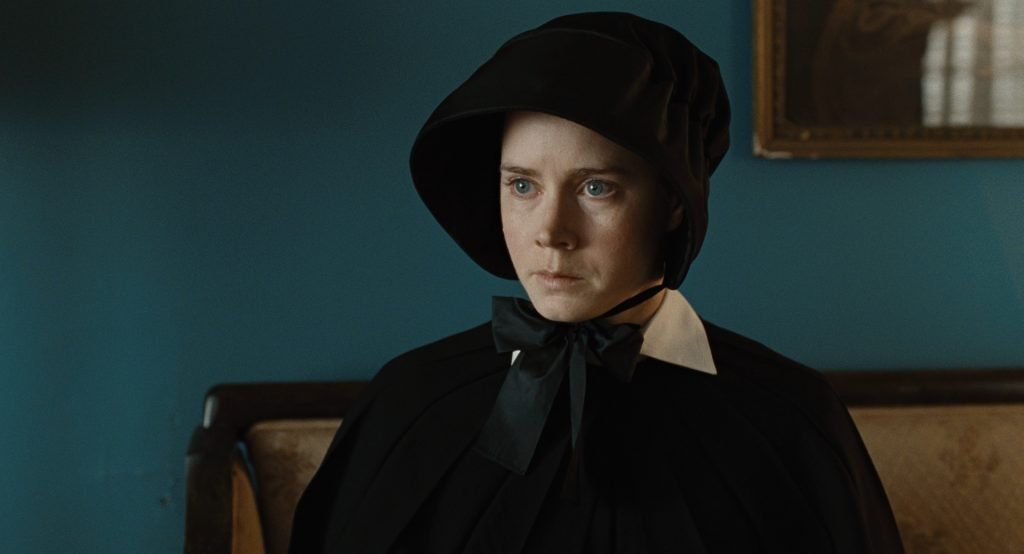 The cinematography, by Roger Deakins, is understated and only draws attention to itself when needed. The use of dutch-tilts in confrontation scenes creates a jarring, unsettling effect signifying the clash of ideals. We see images of feathers floating in the wind when Father Flynn uses them to demonstrate the wildfire caused by gossip. After Sister Aloysius’ meeting with the boy’s mother is over, a strong wind blows in the opposite direction, flailing her clothes wildly. She endures it, resisting the opposition by society, the church, and the wind to her mission.  The orange-brown tint to their scenes (Father Flynn and Aloysius) not only evokes the period setting but also displays the bleak morality imbibed in the story. The claustrophobic tight shots in the climactic battle between Flynn and Aloysius make the gut wrench in discomfort. The sparse use of Howard Shore’s composition, only when it fits the proceedings, makes sure that we do not lose sight of the bigger picture.

Checkout – The 25 Best Movies About Writers

The runtime is appropriate for the movie to spill its beans, never stretching or shortening a bit. Sister Aloysius finally breaks down in the end, expressing her doubts. We cannot definitely pinpoint the subject matter which created them. The dogged persistence of her resolute faith, whether in God, truth, or her beliefs, makes it even more beguiling to see it shattered so abruptly. Perhaps, she had those doubts all along but suppressed them in service of her much larger egotistical self-assurance. The weakness which afflicts everyone gets the better of her in the end. They can hint at any of those feelings- the crisis of faith, impaired judgment, failed system, or her own shaky foundations on which she based her insinuations.

Like her and sister James, we would have our “doubts” about everything which transpired on screen. The indictment is irrelevant to the uncertainty which conceived it. However, as Father Flynn said, sometimes doubt can be a bond much stronger than faith. Faith is lucrative as it satisfies the restless curiosity with unfounded claims and explanations. Doubt, harder to accept, is much more challenging in its uncompromising penchant to let a multitude of possibilities gestate and emerge. Sometimes, paradoxically,  it is the only thing that can provide absolute certainty.