Born in Italy, raised a Mormon and trained to be a ballerina, Amy Adams is full of exciting surprises. Revered in the industry for her power packed performances and choice of uncanny and underrated roles, Adams has not been as lucky when it comes to winning awards. Despite being nominated for six Academy Awards and seven British Academy Awards, she has always missed the mark by a whisker. But that has not stopped her from accepting more challenging roles and scaling newer heights.

Making her debut in the late-90s black comedy classic Drop Dead Gorgeous (1999) Adams has gone on to play many difficult, versatile, grey characters since then. Her first major breakthrough came from Steven Spielberg’s Catch Me If You Can (2002) while her biggest commercial success remains Disney’s Enchanted (2007). From rom coms to psychological thrillers, con films to avant-garde sci-fi to comedies – she has done it all. She has worked with leading directors like Paul Thomas Anderson, Spike Jonze and Clint Eastwood and some of the biggest actors in the industry like Meryl Streep, Julia Roberts, Tom Hanks, Philip Seymour Hoffman, Leonardo DiCaprio, Joaquin Phoenix and Christoph Waltz.

For the purpose of this listicle, I have excluded her superhero films (like Justice League), short films (like Pennies) or films she has done voiceovers for (Like King of The Hill). I have also conveniently skipped her recent works like “The Woman in the Window” and “Hillbilly Elegy”. I have strictly stuck to films where Adams is seen playing the leading and supporting roles, omitting any cameos she has done. Although I must add that one of her best cameos is in the “Night at the Museum 2: Battle of the Smithsonian” where she plays the role of aviation pioneer and author Amelia Earhart. 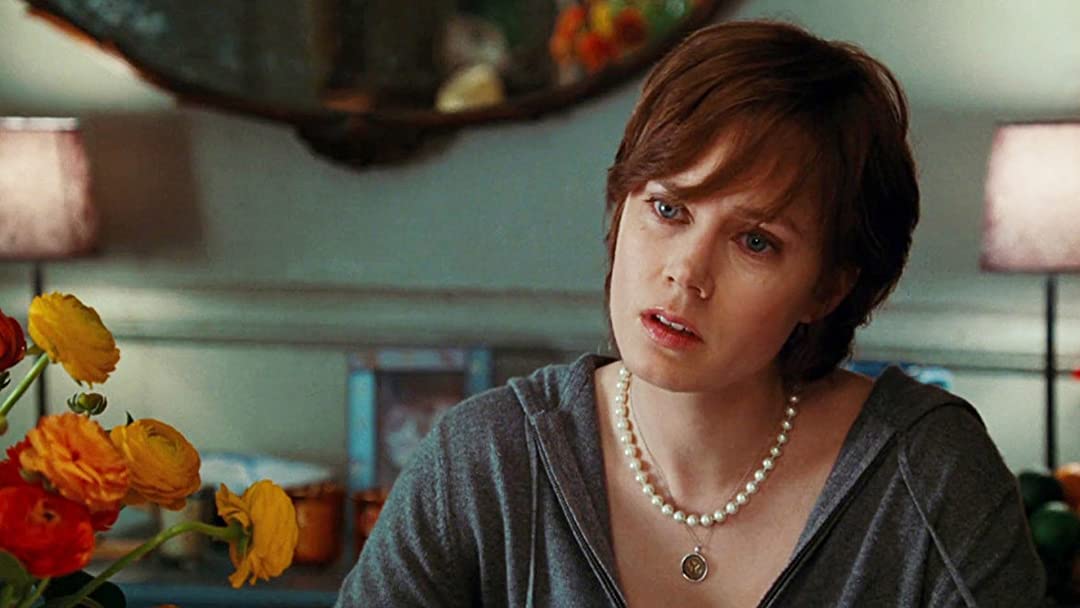 In this heart-warming culinary comedy film, writer and director Norah Ephron manages to bring together the themes of food and passion. Julie Powell (Adams) a young blogger, smitten by Julia Child’s (Meryl Streep) cooking techniques is determined to try out her best recipes as part of a passion project for a year. The project keeps her from thinking too much about her dreadfully dull day job.

Far apart in years, the lives of these two women are intertwined by their common zest for food. If there is anyone who can match the vivacious energy of Meryl Streep on screen, it is Amy Adams. While Adams has previously worked with Meryl Streep in the film “Doubt”, Julie’s earnestness wins over the troubled complexities of Sister James. In Julie and Julia, Adams gives us one of the most loveable and deliciously funny characters of all times. Amy Adams literally sets the screen on fire as con artist ‘Sydney Prosser’ in the multi-starrer film American Hustle. Paired opposite Christian Bale and Bradley Cooper, Sydney’s character is flamboyant, mysterious and engrossing to watch. Adams pulls off her sexy outfits and British accent with equal charm and confidence. She essays the conflicting traits of being vulnerable and dangerous with such perfection that the two male leads and the audience are left guessing her true motives throughout the film. Underneath all the glitz and glamour, Sydney is simply a scared woman trying to hustle and get by in a man’s world.

Unlike the rave reviews she received, Adams herself did not consider her character to be sexy: “I never thought of her as sexy, because for me she was putting it on. It’s funny, because I thought of her as really damaged, like she was lying to everyone.” Years later after the film’s release, Adams admitted to being paid less than her male co-stars in the film, highlighting the gender pay gap in Hollywood. She also spoke about her turbulence with the film’s director, David O. Russell who she said made her cry on the set. “He was hard on me … It was a lot. Most days, I was really just devastated on set.” This needs to be acknowledged while celebrating her magnetic performance in the film. 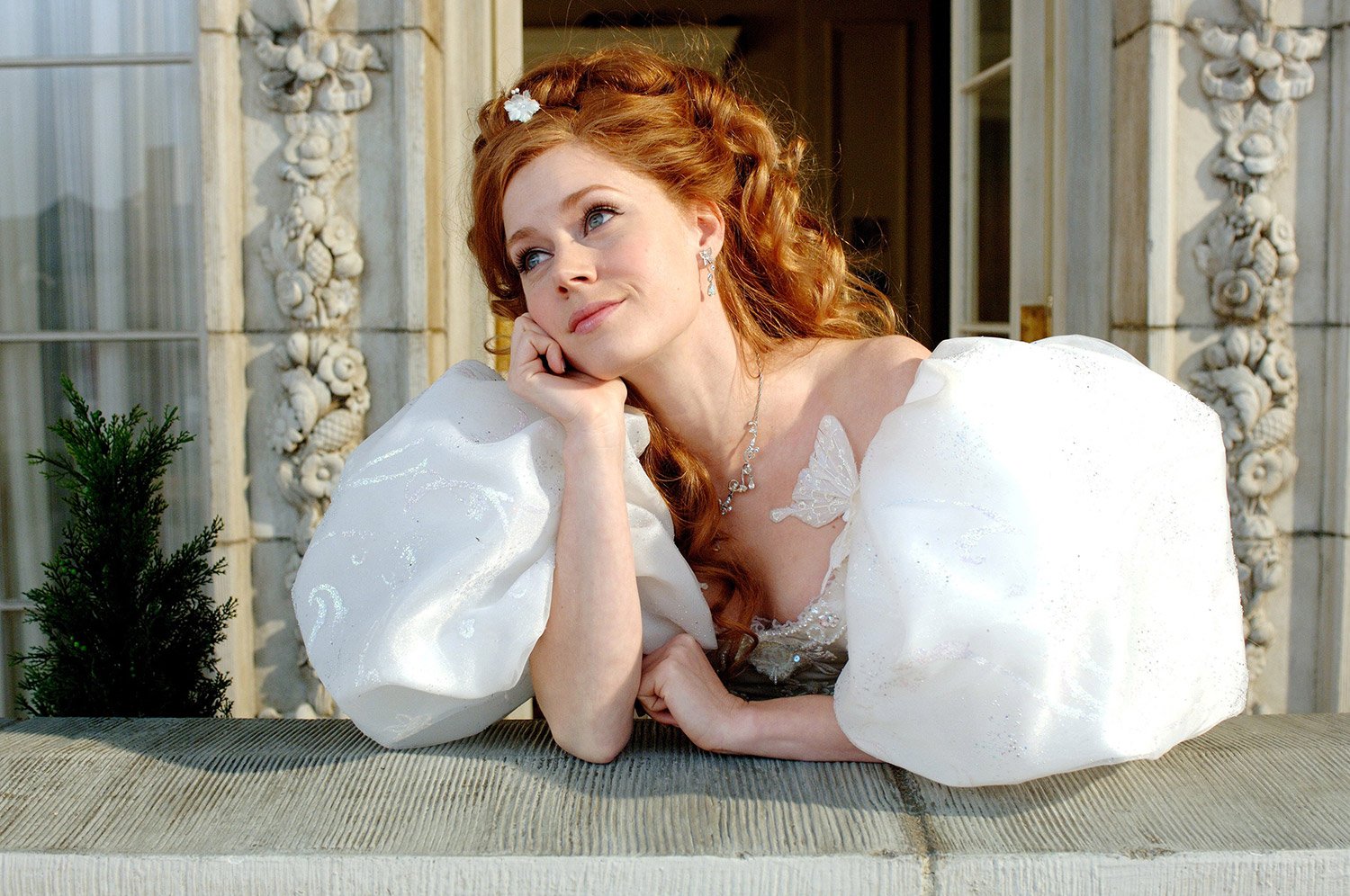 Adams is a pleasant surprise as the optimistic and bubbly Disney princess Giselle. Blurring reality and fantasy, this wholesome family film parodies earlier Disney films while undoing stereotypical fairy tale tropes. It follows a young princess from the fairy-tale kingdom of Andalasia as she gets transported to New York City on the day of her wedding by an evil sorceress Narissa. Struggling to cope with the fast paced city life, Giselle must find her true love.

Adams literally transports herself into the Disney universe, resembling early Disney princesses like Snow White or Cinderella. She effortlessly molds herself into a wide-eyed eternal romantic with moral convictions and a sunshine demeanor. With the help of witty dialogue, masterful singing and dancing, Adams makes us all believe in magic once again. 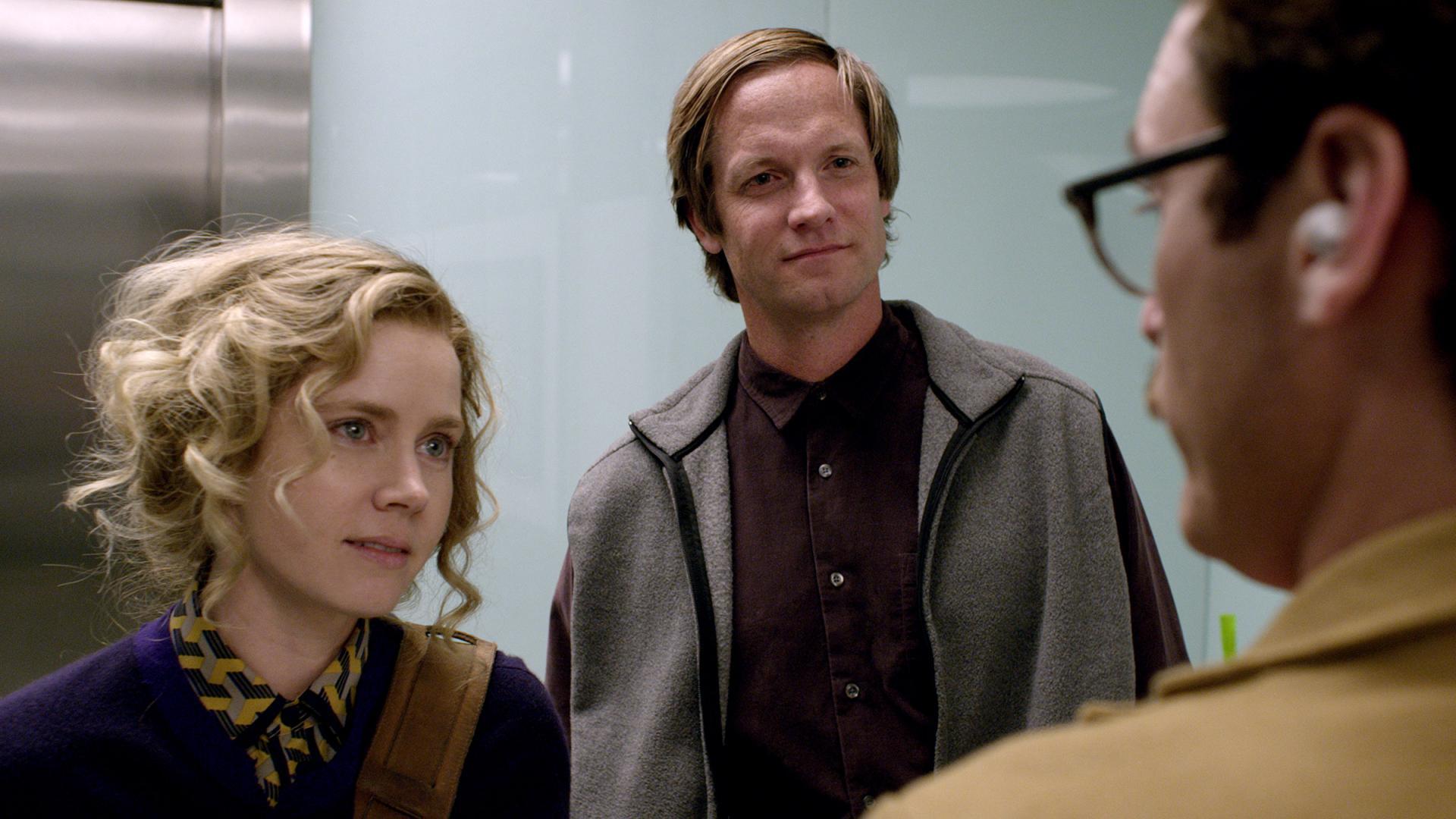 While there is no doubt that “Her” belongs to Joaquin Phoenix, Amy Adams is so impressive in her supporting role that it is impossible to re-imagine the film without her. Adams plays Theodore’s curious and comforting friend ‘Amy’ who is always around the corner in case he needs a shoulder to lean on.

While Theodore is in love with Samantha, his artificially intelligent operating system, Amy too is exploring her relationship with an operating system left behind by her estranged husband. She always asks Theodore the right questions, prodding him to introspect and reflect on what he wants out of love and life. In the process, she delivers some iconic dialogues like “I think anybody who falls in love is a freak. It’s a crazy thing to do. It’s kind of like a form of socially acceptable insanity.” 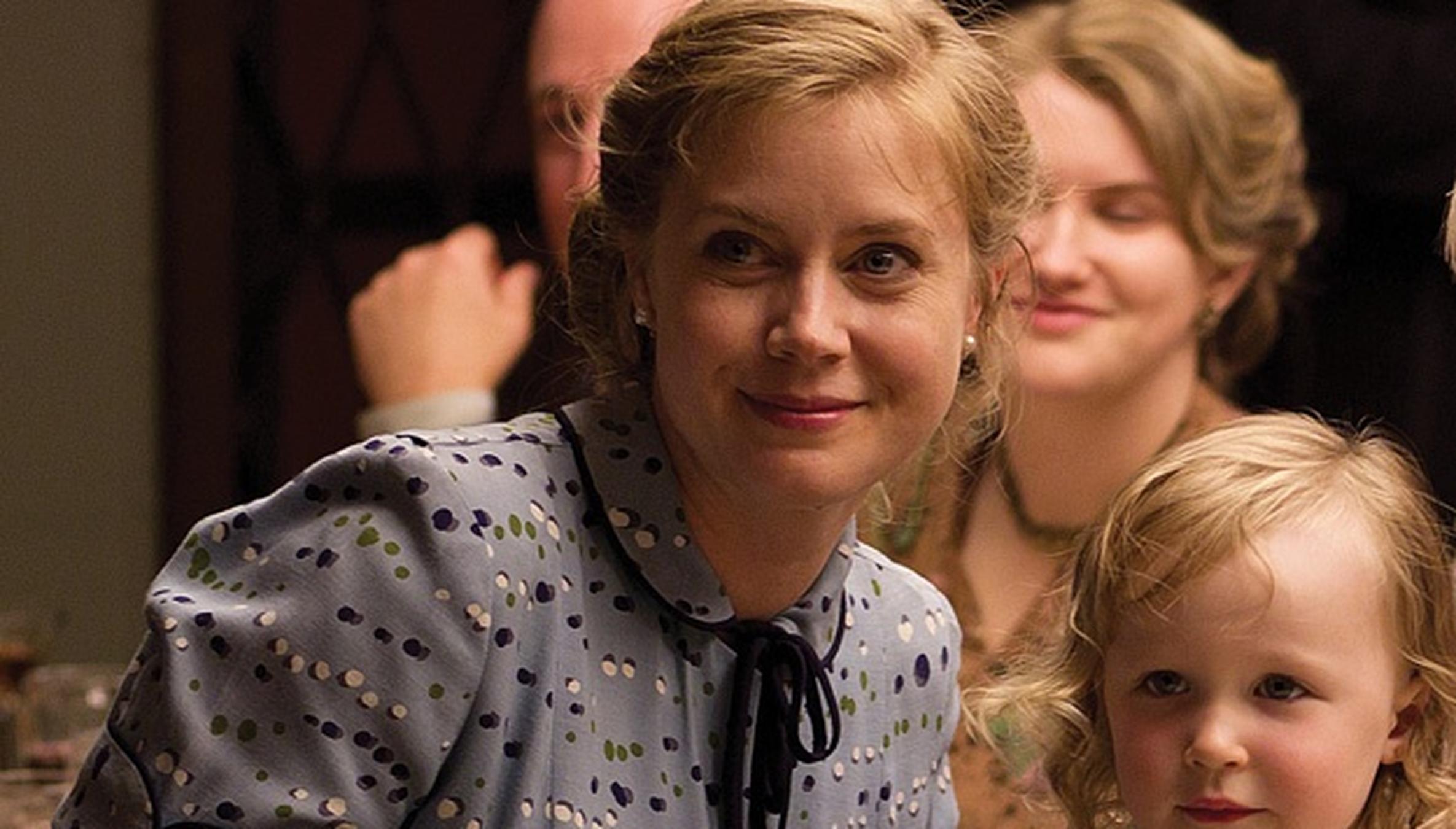 Another psychological drama film written by Paul Thomas Anderson and staring Philip Hoffman and Joaquin Phoenix that establishes Adams supremacy as an actor par excellence. The film discusses the story of Freddie Quell (Phoenix), a World War 2 navy veteran struggling to cope with a post-war society. His life changes when he meets Lancaster Dodd (Hoffman), a religious leader of a cult known as “The Cause”. Dodd takes a liking to him and accepts him into the movement.

As Peggy Dodd (the wife of Lancaster Dodd), Adams portrays a fearful, steely woman pulling the puppet strings behind the scenes. She is mistrustful of people and it feels like her dismissive and cold eyes are closely watching everyone in the film. Adams later expressed that she had a hard time liking Peggy. “I’ve never been able to say that about one of my characters. As I was playing her, I liked her. I understood her. But as a witness to her as a filmgoer, it’s the first time I walked away and thought, “I’m not sure how I feel about her.”

Read The Complete Review of The Master Here

Watch The Master on Netflix 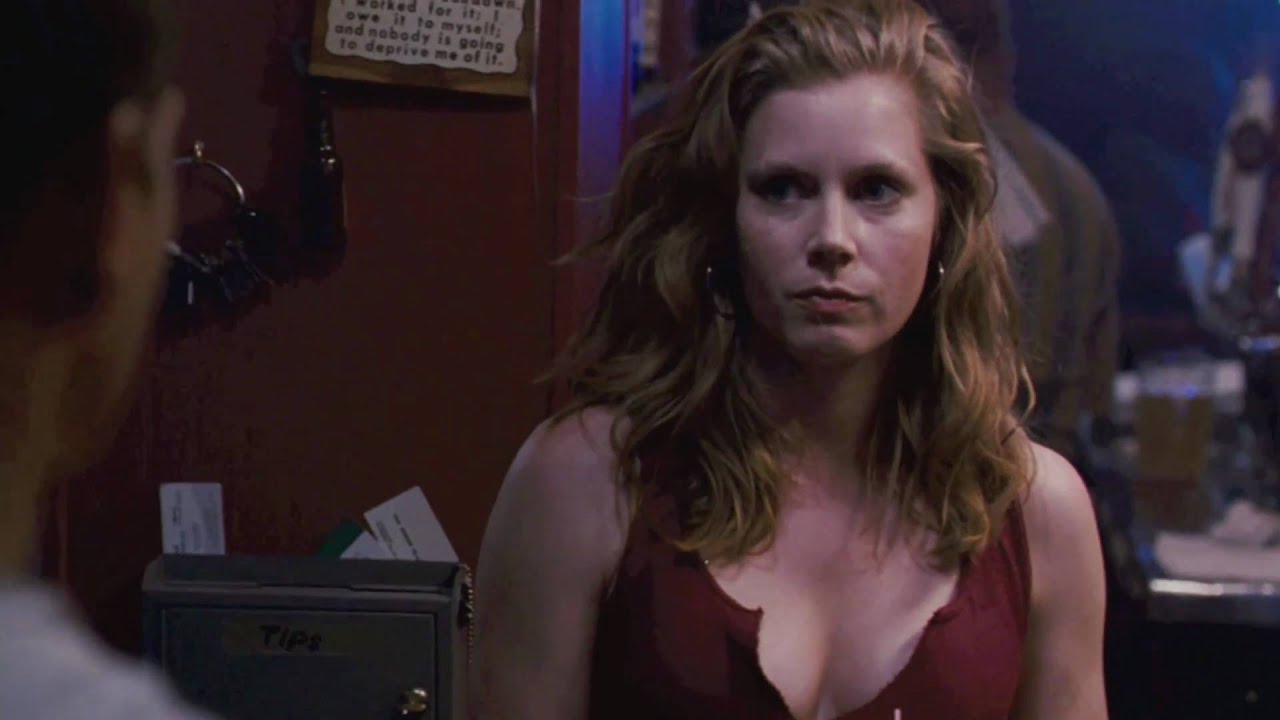 Based on a true story of a struggling professional boxer (Micky Ward played by Mark Wahlberg), this biographical sports film casts Adams in a gritty and inspiring role. Adams shares a crackling chemistry with her co-star Wahlberg that is difficult to miss. Her character in the film – the sweet faced Charlene Fleming (based on the real life girlfriend and wife of Micky), works at a bar and conveys emotions physically through non-verbal cues as much as through dialogues. 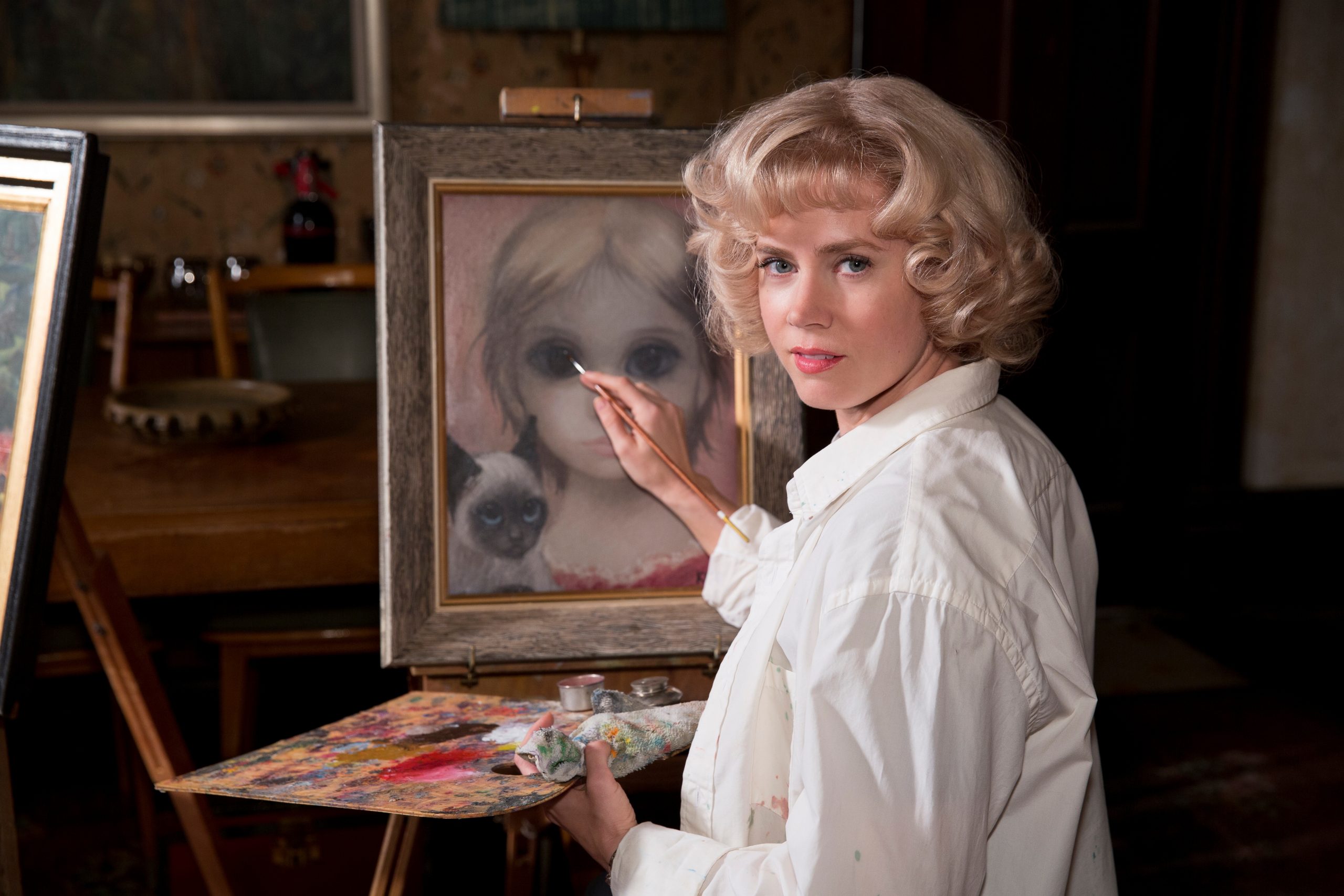 In this Tim Burton directed film “Big Eyes,” Amy Adams delivers one of the most nuanced performances of her career. Based on a true story of Walter Keane – the infamous, commercially successful artist who would take credit for his talented wife Margaret’s paintings of “big eyed” children, the film reflects on appropriation of art and more. What is striking about Walter is that he did not even know how to paint but would threaten his wife to not disclose their dirty secret.

Meek and distraught, Adams is super convincing in her portrayal of artist Margaret Keane who finds the strength to step out of her husband’s shadow. The villainous, terrifying husband Walter Keane is played by none other than Christoph Waltz. Adams poignantly captures Margaret’s inner conflicts, social dilemmas and legal difficulties in fighting the case against her manipulating husband. Her journey towards awakening and rightfully reclaiming her name and legacy makes Big Eyes a satisfyingly unforgettable watch. In a lot of ways, it can be said that Adams delivered “The Wife” way before Glenn close did. 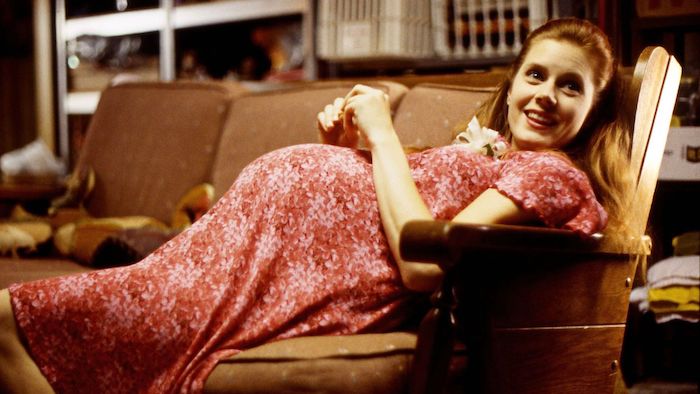 Adams first academy award nomination was in 2005 for the role of Ashley Johnson in “Junebug” and rightly so. Here, the magnificent American actor plays the heavily pregnant wife of Madeline’s brother-in-law who hopes that a baby will smoothen over their rocky relationship. Instead, she delivers a stillborn baby in an unexpected tragic ending. Ashley is a naïve, affectionate chatterbox whose constant jabbering seems to be in stark contrast with the events in her immediate environment. She is good natured and friendly, meaning no harm to anyone.

Unlike the Chicago bred Madeline who is a temporary visitor, Ashley understands the dynamics and social mores of the family and does everything to maintain them. The film is a family drama of sorts feeding on small moments and inter-familial relations and sub-plots. Adams beautifully embodies all of Ashley’s quirks and small town girl mannerisms, lending her a sweet comedic quality. 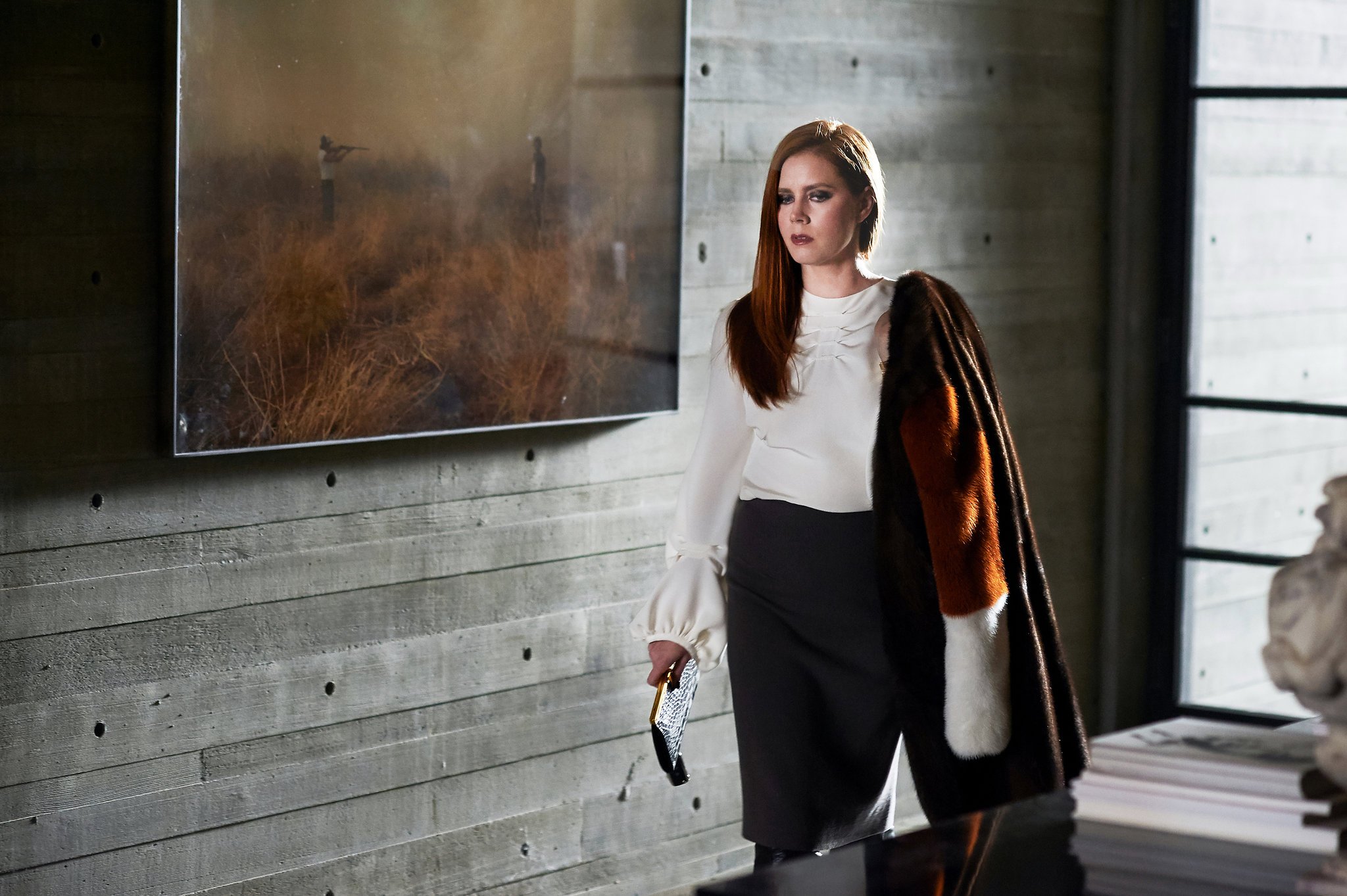 In this neo-noir psychological thriller directed by fashion designer Tom Ford and starring Jake Gyllenhaal, Amy Adam’s biggest strength is that she makes us feel sympathetic towards a despicable character. She plays Susan – a rich sophisticated Los Angeles art gallery owner disenchanted with her ostentatious lifestyle and distant spouse. Things take a turn when her ex-spouse Edward (played by Gyllenhaal) sends her a manuscript of his novel “Nocturnal Animals” to read. Susan reads it at leisure with hypnotic intensity as the narration of her past, present and future keep intertwining, propping up strange events.

Also, Read : Elisabeth Moss And Jake Gyllenhaal To Star In A Film About The Making Of “The Godfather”

Had it not been for Amy Adams, this film would have gone unnoticed given its knotty plot and lucid narration. The film gets suspenseful as it progresses and Adams mesmerizing persona complement its visual storytelling. Her melodramatic and intoxicating expressions add to the overall Hitchcockian mood of the film. 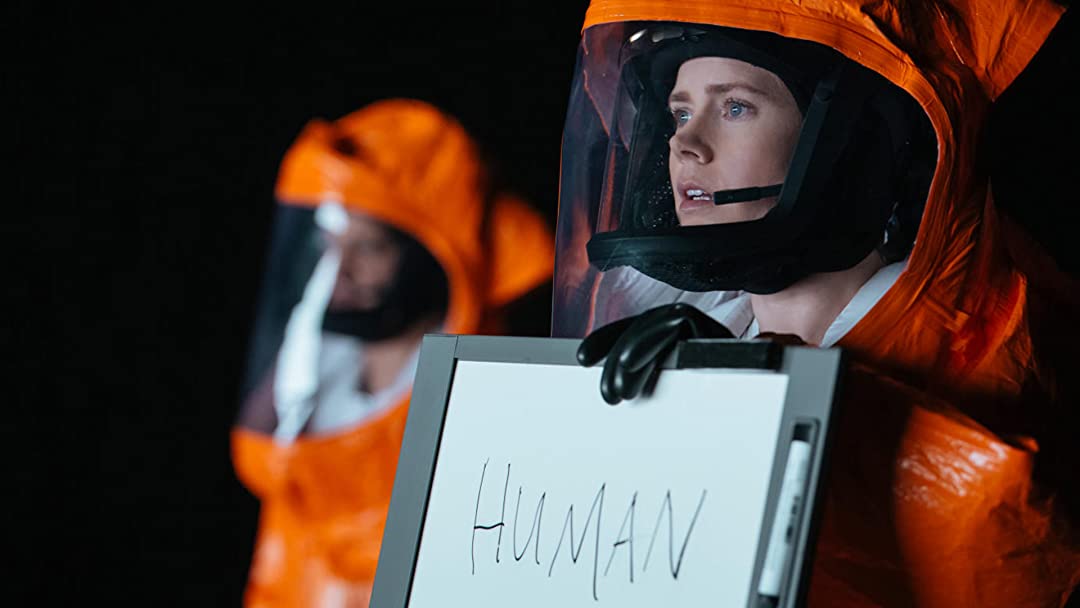 Directed by Denis Villeneuve, Arrival is a watershed moment in cinema because it marks a radical departure from mainstream, stereotypical sci-fi films on aliens that all of us have grown up watching. The aliens, instead of being seen as evil and posing a threat to humanity are viewed as an opportunity for building a more resilient and peaceful planet. Johann Johannsson’s surreal soundtrack perfectly matches the mood and tone of the film.

Amy Adams delivers a mature knock-out performance as Dr. Louise Banks, an acclaimed linguist and professor. She is roped in by the US military to lead a special mission to comprehend and communicate with the alien intruders using symbols and verbal cues. Grappling with her own personal trauma owing to her young daughter’s death, Adams essays the role of Banks with immense poise, empathy and intelligence. Her subtle and serious expressions convey the complexities of emotions her character is struggling with. With her intuition and compassion, Banks manages to save the day, giving the audience several hair raising, memorable moments to relish.

A special mention needs to be made for Amy Adams in “Sharp Objects”. Based on Gillian Flynn’s novel, the psychological thriller casts Adams as a mentally troubled crime reporter Camille Preaker who returns to her hometown to solve the murder of two young girls. Had it been a film instead of a miniseries, nobody could have stopped her from getting that much deserved Oscar.

"Some people cry in the afternoon when love starts to fade. I go to the movies." Swears by Noah Baumbach and Blue Valentine. Firm believer of why rise and shine when you can wine and whine. You can reach me at @theblahcksheep