Krzysztof Kieślowski’s last directorial venture- the final installation in the Three Colors trilogy, is as dense a film as it is beautiful. Was it a parting gift for the audience that Kieślowski cared the most about? Or is it entirely a personal statement, autobiographical in its central character development, providing for a singularly devastating vision on human consciousness? Most certainly it is a mix of both, and yet it still manages to rise above these categorizations. Completing the trio of ideas that the Three Colors was built around- Blue (1993) with Liberty, White (1993) in the frame of Equality, and finally Red (1994) – on Fraternity, Krzysztof Kieślowski culminated this film as an assembly of the protagonists of the three films, which somehow feels forced, but is markedly optimistic.

Red is inarguably the lightest in its treatment, and technically- Kieślowski’s most accomplished work. It centres around the chance encounter of two very different individuals, who gradually develop a unique bond with each other. Encounters- many unmarked and unrecognized, abound in this film, unaware of the other’s presence. Is there a difference in the community that tempers communication? Are we more akin to communicating when located away, physically? These difficulties are never answered but are treated with utmost intelligence and depth, right from the opening moments of the film, in which the camera slides down the telephone wires in rapid space, resulting in a busy encounter. This chatter of unshared voices suggests a deep-seated social communication that is at once intimate and far-reaching. It belies the perennial urge to connect in order to survive.

Valentine (a sublime Irene Jacob) realizes that her boyfriend has no faith in her, and still she tries to hold on. Her genuine projection of love lies in her loneliness, as she declares over the call how much she wants his company during empty nights at her flat. Even if the retired judge Joseph Kern ( a brilliant Jean-Louis Trintignant) has s cynical and perverse interest in overhearing his relatives’ phone calls, it is still seated in a lamentation on the desire of human beings to be loved. 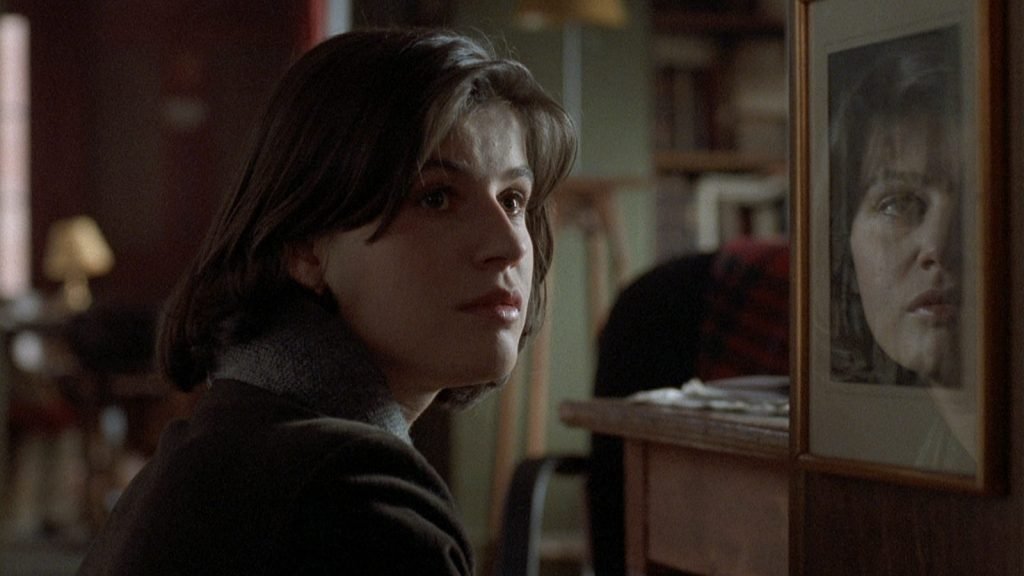 The two protagonists are paired as opposites- Valentine being the naive, optimistic and compassionate woman, starkly in contrast with the jaded and cynical Joseph. Are they two sides of the same person that Krzysztof Kieślowski was? Most certainly, yes. The compassion is paired with an estranged silence, in every Krzysztof Kieślowski film, and Red is the most synthetic establishment of these traits. Valentine and Joseph communicate with each other, and their connection is a journey that Red traverses, initially with hatred, then to revelations, and finally- with acceptance. This journey is shown not through dialogue, but through the cinematography.

Related to Three Colors: Red – Conflicting Resolutions And The Metaphor Of The Aged People In Kieślowski’s Three Colors Trilogy

Piotr Sobocinńki’s camera moves with effortless ease from one position to another, as if erasing the potential of a standpoint. Notice the second meeting of Valentine and Joseph, and how the camera moves beyond the gaze of Valentine’s position, ahead of her. When he reveals his reason behind the spying of his neighbours, notice how the camera zooms out from them, revealing the sunshine to completely illuminate the screen- symbolic of Valentine’s growth as an individual. What is the result of this revelation? How does this newfound vision take hold of us, and outgrow us from ourselves to the another?

In an excerpt where Danusia Stok had interviewed, Kieślowski had said- “There’s something beautiful in the fact that we can give something of ourselves. But if it turns out that, while giving of ourselves, we are doing so in order to have a better opinion of ourselves, then immediately there’s a blemish on this beauty. Is this beauty pure? Or is it always a little marred? That’s the question the film asks. We don’t know the answer, nor do we want to know it. We’re simply reflecting on the question once again.”

The manner in which Valentine and Joseph meet, and for that matter the way in which even Valentine’s path is crisscrossed with Auguste ( Jean- Pierre Lorit), a young judge who happens to stay close to Valentine’s apartment, and whose life reflects Kern’s so close it might as well be symbolic of a doppelganger, is made to show how things happen in a pattern. That certain things occur beyond our recognition, or demarcation, and are all patterned to fit a larger scheme of fate and destiny. Quick to question and withdraw answers, Kieślowski manages to orchestrate a transcendent sublimity in actions that shape our actions in life.

In a film like this, it is highly probable to lose track and sink in its own high tide. But Red never abandons its shore. There’s red all over the film- in objects, walls, clothes, lights, backgrounds- and yet it never feels excessively there. Kieślowski manages to infuse red with a multitude of meanings- love, anger, desire, pain, passion- a whirlwind of emotions covering a lifetime. The contacts and contradictions occur all at once, in unhurried narrative drive, fitting in precision. The actions are less, the reactions more. The practical mind rushes in and is skillfully linked to the overriding impossibility of it. Unpredictable as it gets, there is no impediment to the rich, cinematic experience that Red promises to be. It is a film to be revisited, reconsidered and revalued for years to come.

How the 10 Best Films About Gambling Approached the Subject