What’s exactly the purpose of a period horror film (or show)? Does the filmmaker want to portray the visual aesthetic of that time? Are they interested in showcasing outdated vocabulary and forgotten accents? Or is it an excuse to craft a score of violins and Celtic chants? Well, the real reason can be a mixture of all that, along with the intention to display how far society has progressed while having unhealthy traces of many regressive traditions. For example, homophobia isn’t a thing that should exist in the 21st century. Consenting adults should be allowed to love consenting adults, period. And if you think otherwise, let’s just say you look like the group of people torturing a lesbian couple in The Last Thing Mary Saw (2022).

Written and directed by Edoardo Vitaletti, The Last Thing Mary Saw opens in 1843 Southold, New York where the titular Mary (Stefanie Scott) is accused of killing her family. While one of the deputies (played by Philip Hoffman) in charge of Mary’s conviction thinks that she’s under the influence of Lucifer, and hence should be killed instantly, The Interrogator (Daniel Pearce) thinks she should be given a chance to speak her truth. So, Mary begins to talk about her relationship with the housemaid, Eleanor (Isabelle Fuhrman), and how it was frowned upon by her family, especially by The Matriarch (Judith Roberts). She reveals how the family tortured her and Eleanor for simply loving each other. And then she spills the details on how the tension between the family and the couple skyrocketed after the death of The Matriarch and the arrival of The Intruder (Rory Culkin).

The movie opens with the following words by John Calvin: “All events whatsoever are governed by the secret counsel of God”. And Vitaletti interprets and reinterprets this saying throughout the course of the movie. In the first act titled ‘The Temple of Earthly Desires’, we see how the family uses their hardcore religious beliefs to rationalize their homophobia and justify their treatment of Mary and Eleanor. Additionally, we are shown how soft and tender Mary and Eleanor’s relationship is even though it’s being considered an act against God. The second act titled ‘A Monstrous Birth’ sheds some doubt on the notion that the family, who think that they’re relaying the word of God, are probably being misguided by a force that’s not so divine in nature. Finally, the third act titled ‘The Old Lady of Bathabara’ completely flips everything on its head, including the film’s stance on homophobia, by going full tilt into the supernatural and keeping the movie’s morality open-ended. And that last part is not exactly okay. 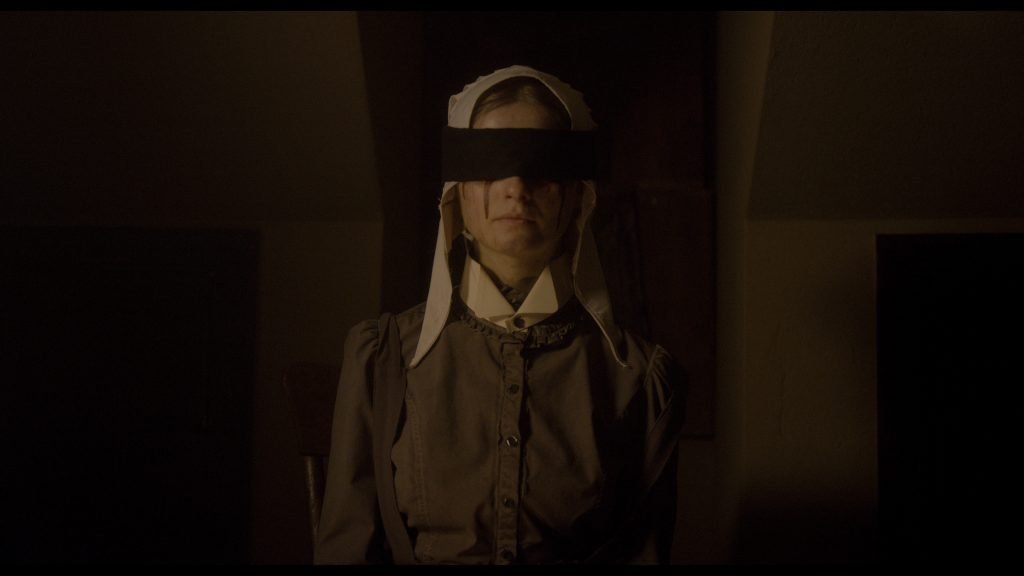 Here is the thing. The movie is rock solid until it’s last 5-10 minutes. Slow burns are very hard to nail (slow burn horrors, to be specific), especially with little-to-no scares. But Vitaletti, with the help of composer Keegan DeWitt, cinematographer David Kruta, editor Matthew C. Hart, and production designer Charlie Chaspooley Robinson, keeps the atmosphere tight and dense enough to engage and entice you. Every single performance from the cast, especially that of Isabelle Fuhrman and Stefanie Scott, is stunningly restrained and impactful. Judith Roberts as The Matriarch will certainly send a bunch of chills down your spine. There’s a massive, approximately 30-minute long stretch in the third act where a single word isn’t uttered. However, you won’t even realize that because you’ll be too busy wondering when things are about to go downhill. In addition to that, the art direction by Tiffany Stoker, set design by Leah Claire Borrie, costume design by Sofija Mesicek, and the sound editing by Rob Daly are immaculate.

That said, the concluding 5-10 minutes don’t just reuse the frowned upon tragic lesbian trope, but also doesn’t exactly clear whether the use of religion to view homosexuality is right or wrong. Because it shows the death of an innocent individual, who is technically on the side of the religious oppressors and a silent observer, at the hands of the lesbian couple. Those who know the exploitative nature of religion will be able to tell the difference. However, those who are on the fence (and find the passive observer to be relatable) and those who are deeply religious will likely take it in the wrong way. As for the tragic lesbian trope, you can say that it is justified because the narrative is set in the 1800s. Well, The Witch (2015), a movie that The Last Thing Mary Saw is being compared to and shares quite a few parallels with it, offered its protagonist a cathartic and freeing conclusion even though witchcraft was perceived as a crime back in the 17th century. So, what stopped Vitaletti from doing the same, instead of making his characters suffer miserably till the credits rolled? Your guess is as good as mine.

In conclusion, The Last Thing Mary Saw by Edoardo Vitaletti is an expertly crafted, slow-burn horror film that comments on homophobia and religion. If you are a fan of period horror films such as Crimson Peak (2015), The Devil’s Backbone (2001), The Awakening (2011), The Others (2001), and of course, The Witch, you should definitely give it a try. Those concluding moments might muddle your overall viewing experience. But it will certainly be interesting to see the varied reactions to that ending from people from various religious backgrounds.