Let’s start this review on a low key weird note. In a video on Jake Paul’s diss track on teachers, Cody Ko and Noel Miller talk about how Paul completely misunderstands education. By doing so, he sets a dangerous precedent that studying isn’t important because it doesn’t help a kid get Lamborghinis or become a superstar. Then Cody and Noel reframe this perspective by telling the viewers that schools and colleges are the building blocks of one’s life. Even though it doesn’t look lucrative, you’ve to do it. Now, things would’ve been great if Paul’s sentiment was limited to him. Unfortunately, it’s not and many young individuals think similarly. That’s why, in this scary climate, the existence of The Unmaking of A College (2022) is relieving as it shows so many students understanding the importance of education and fighting for their and others’ right to study.

Directed by Amy Goldstein, The Unmaking of A College delves into the 2019 crisis at Hampshire College when students led a 75-day sit-in (the longest in American college history) to protest against newly appointed President, Miriam Nelson’s decision to technically shut the institution down. The story begins with the students, as well as the faculty, getting a letter out of the blue during their winter break, stating that the college is looking to get into a strategic partnership and won’t be taking in new students during Fall 2019. This forces students and teachers to get on their feet and firstly, push back the voting day for finalising this decision and secondly, get a better idea of the bigger picture behind said decision. The documentary is made of footage from the protests, news clippings, and interviews of students, staff, board of trustees, and legendary filmmaker and Hampshire College alum Ken Burns.

As mentioned earlier, the biggest takeaway from The Unmaking of A College is seeing the foresight that this new generation possesses (apologies for sounding like an old person). They understand that hasty judgments always have some ulterior motive and one shouldn’t give authorities a walkover just because they can. In all likelihood, they aren’t representative of the North American population, let alone the students who are going to schools and colleges worldwide. But they are certainly inspirational, which is something that’s hugely needed right now. This pandemic has absolutely crushed humanity’s ability to unite on the ground and protest for what’s right. In more ways than one, this pandemic has infantilised today’s teens into thinking that they only need to do what they’re told. However, this documentary shows that, historically, students have made the biggest of changes by protesting, by challenging the status quo, and by showing adults that age is not indicative of decision-making abilities. 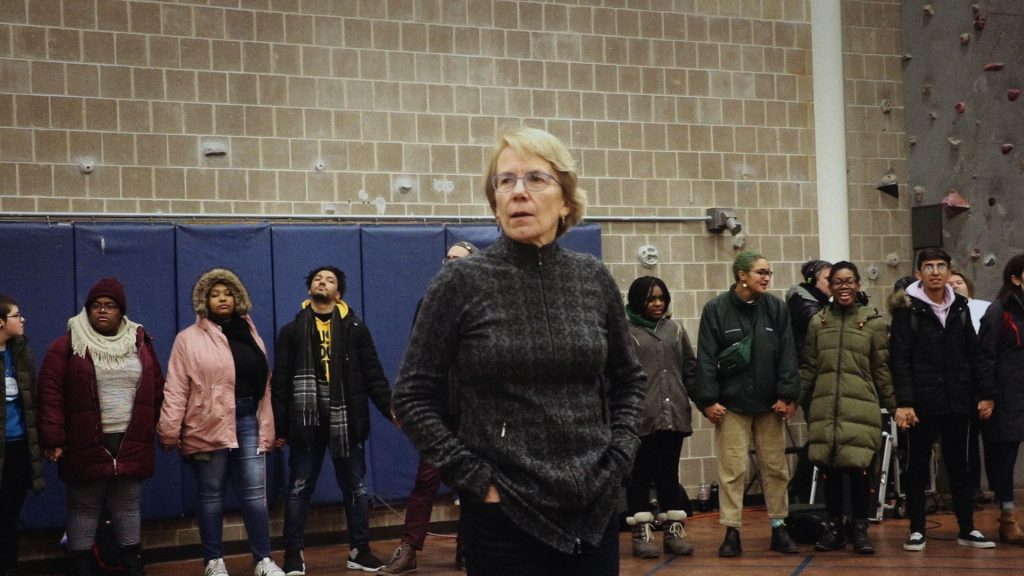 This brings us to the decisions that started this whole movement. Well, without going into too many spoilers because there’s a fat chance that a lot of non-North American people won’t be aware of this incident, they were evidently not great. A very surface-level reading might make it seem that Hampshire College was in financial distress. Hence the decision to bring in a “partner” of sorts was the only way to go. But as shown via the investigation done by the students, the faculty, and the team behind the documentary, the urgency to make it seem that there weren’t many options left for the college was done to hide many layers of corruption. What’s worse (and this is something the documentary doesn’t dive into too much) is that it looked like those interested in buying out Hampshire College had the intention to destroy independent American education and homogenise it. And Hampshire was just one step towards getting closer to that goal. Which is mind-boggling, isn’t it?

But if you monitor the education system, in general, and the politics and policies around it, things such as this probably won’t seem very mind-boggling. Because you see, the nexus of politicians, businesses, investors, and every other organisation and individual who benefit from the first three people mentioned here don’t actually want you to get educated. Political rallies happen but schools are closed. Students don’t have access to free internet but schools are forced to do classes virtually. Government schools (which are cheap) are ignored and private schools are prioritised so that only the rich can afford education. Why? So that every company can utilise your lack of education and expertise and exploit you with minimum wage while earning millions themselves. Nobody will protest because they’ll think that that’s what they deserve. Or worse, they won’t even think. But why do all this? That’s because protesting for one’s basic rights (which can only come with educations) isn’t good for business, according to these oppressors of freedom of thought.

The Unmaking of A College is very North America-centric and sometimes relies a little too heavily on the audience’s knowledge about the overall history of Hampshire College and education in North America. So, it might not be relatable for those residing out of the USA all the time. That said, there’s enough material in the documentary to help you realise how important it is to preserve the institutes that still prefer specialisation over generalisation. And open your eyes to your rights to affordable education, career counselling, and more. This should be mandatory viewing for every single student out there all over the world. If schools and/or colleges don’t want to screen The Unmaking of a College, somebody should do a private watch party and enlighten the generation that’ll carve humanity’s future.

The Unmaking of a College Official Trailer

Movie Themes You Don't See on the Big Screens Anymore