Home»Reviews»Don’t Look Up (2021): A Parody of American Apathy
Reviews

Beyond ecocritical questions, the final scene of Don’t Look Up (2021) runs deep, critiquing simultaneously the crisis of values in the current capitalist structure and the notion of Christian domination. Western capitalism has long evoked and manipulated the Christian domination narrative, that is, the divine command to humans to fill the earth and subdue it and have dominion over every living being, according to Genesis 1: 28, to justify rapid industrialization. Don’t Look Up subverts this notion. Yule played by Timothee Chamalèt confesses to Kate (Jennifer Lawrence) earlier in the movie that he was brought up by Christian parents but he had to “find his way” to a version that was acceptable to him. The “anti-comet” characters in the final scenes of Don’t Look Up sit around as a family and pray, even though the lead character Randall Mindy’s family are purportedly not religious.

As Don’t Look Up opens, Mindy, an astronomer from Michigan State University played by Leonardo DiCaprio, discovers along with his doctoral candidate Kate Dibiasky that a “planet-killer” comet is headed toward the earth and that they would have six months’ time to convince the government to take action. In a satirical portrayal, POTUS Janie Orlean (Meryl Streep) and her office dismiss the gravity (literally) of the situation, an unapologetic representation of the wasteland that is current American politics by director Adam McKay.

Related to Don’t Look Up (2021): 9 Films To Watch If You Liked Adam McKay’s New Netflix Movie

Kate and Dr. Mindy go on a wild goose chase to be taken seriously through the media. The storyline is made up of scenes from a dystopia, parodying the largely materialistic concerns of the American collective consciousness. Kate Dibiyaski’s outburst on a news show becomes fodder for trolls, and there are highly disparaging memes depicting her mental instability all over social media. The red-haired, weed-smoking scientist who tells truth to power is representative of how all climate activists, particularly women, are received by the media. Kate is bullied on social media for her outraged persona, while Mindy’s calm, rational demeanor turns him into a revered public activist. 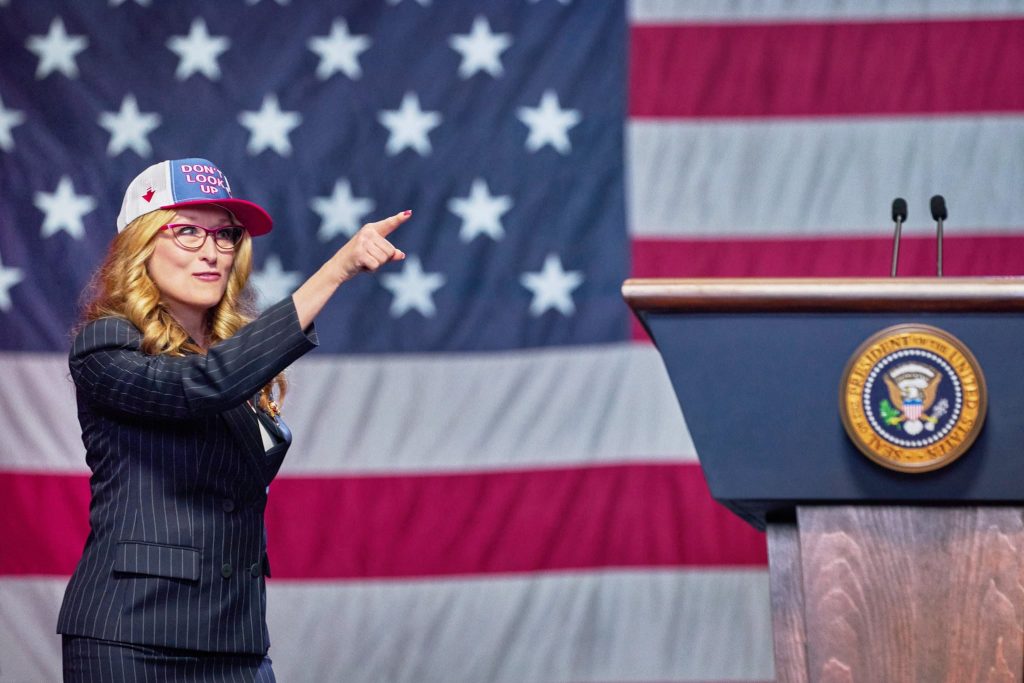 Don’t Look Up (2021) is a proponent of the nature-industry binary, telling us that the obsession with industrial “progress” is killing mankind. This apathy is embedded in the characters of Streep’s Janie Orlean, a glaring parody of Trump, talk show hosts Brie (Cate Blanchett) and Jack Bremmer (Tyler Perry), and business magnate Peter Isherwell. All three characters draw extensively from the public personas of real-life celebrities who have been stirring the political climate of the United States over the past decade. And this political climate has forsaken its responsibility to climate change. Time Magazine’s Justin Worland talks about how the movie has offered a harsh portrayal of private-sector initiatives targeting climate change. “When I think of climate change, I think of — and the answers to it — I think of jobs”, said President Joe Biden on January 21, 2021, before signing executive actions on “Tackling Climate Change, Creating Jobs, and Restoring Scientific Integrity”.

The Biden administration’s response to climate change has been as preoccupied with climate programs pushed by private companies as the Obama administration. There is a clear crisis of consciousness among world leaders about how urgent climate action is. Studies contend that right-wing parties across Europe and US use “populist communication strategies” to convince the people that elite focus is responsible for the loss of economic competitiveness and hardship for individual members of the nations. The climate crisis is touted as an elite, Leftist cause, engineered to hinder industrial progress. Conservative leaders, most prominently Trump, have ridiculed and mocked climate activist Greta Thunberg. Worland gives Don’t Look Up a pat on the back for proving “that climate change can be woven into the cultural narrative in an entertaining way”.

In the final scene of Don’t look up (2021), the Christian urge to dominate the earth is subverted as suburban outlier Yule says a prayer, and the characters join hands around the table. The final moments of the movie turn the dark comedy into a tragicomedy as Isherwell and Orlean enter a protection chamber that attempts to dominate the world beyond its existence. It is interesting to note how reformed religious convictions and the sense of community are shown to be viable alternatives to the apathetic, individualist American consciousness that seems to be obsessed with money, fame, and technology.

Mahaan [2022] 'Prime Video' Review - Calling It 'Ridiculous' is an Understatement