Mahaan [2022] ‘Prime Video’ Review – Calling It ‘Ridiculous’ is an Understatement

Karthik Subbaraj is quote-unquote ‘the stylish filmmaker of Tamil cinema’. But nothing can be purely stylistic, at least within the genre framework Karthik Subbaraj is nowadays working. Unless you are a Sergio Leone, who in his best works makes style itself his strongest substance. Or if you are a Quentin Tarantino, for whom visceral form precedes over substance. Or at least a Mani Ratnam, who sells us his style more effectively, despite the unreal situations and all-surface substance. Well, these are the three filmmakers Karthik Subbaraj pays some kind of tribute in his movies. Hence the references to them, before getting into the part of why Karthik Subbaraj’s latest work Mahaan sucks.

Buried beneath all the empty style and swagger, Mahaan does carry some substance. It has something to say about ideology, the burden of legacy, freedom to make mistakes, religion, sins of the father, etc. But it’s all the more facile and pretentious than Subbaraj’s style. I think Karthik Subbaraj has started suffering from delusions of grandeur when he was roped in to do a Rajinikanth film. He has only made four films by then. Pre-Petta, with three fairly good movies – Pizza, Jigarthanda, Iraivi – and one misfire – Mercury  – it felt that Karthik Subbaraj is a very promising Tamil filmmaker. Even though Petta wasn’t out and out a ‘Karthik Subbaraj Padam’, it was an efficient pastiche of extraordinary Rajinikanth movie moments. In fact, Petta was the nicely packaged ‘Thalaivar padam’ after Padaiyappa (1999), and Sivaji (2006). 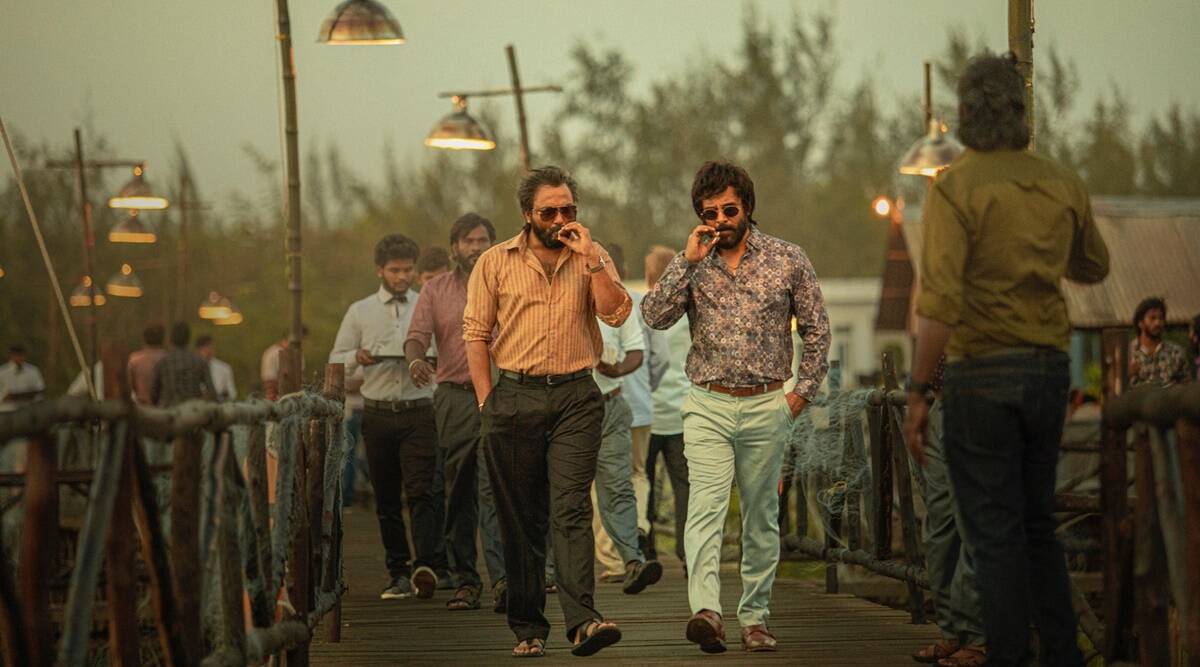 Obviously, Subbaraj wrote Petta as a fanboy, cooking up moments that he would like to have in a Superstar film. A filmmaker might get away with it when it comes to a Rajinikanth film. Considering the legacy of that man, even a stylish spin on the very predictable story elements can work great for the Tamil audience. The problem is that Karthik Subbaraj is yet to recover from the hangover of Petta’s success. He has pursued that same mode of writing in Jagame Thandhiram (2021) and Mahaan (2022), i.e., twisting and bending the narrative in order to include the so-called ‘mass’ moments for the star actor. The Hindutva villain in ‘Petta’ or the racist old guy in ‘Jagame Thandhiram’ is simply added as flavors.

Jagame Thandhiram, despite the lazy writing and incoherent jumps was entertaining to an extent. Mahaan is simply lazy and dull. Karthik Subbaraj often seems to be winking at us, saying “Did you get that metaphor or that message?” In one anticipated moment, the protagonist elevates himself to the status of a guardian angel. The filmmaker sets-up this sequence pretty well. Until, a character keeps conveying to us the meaning of the visual. Tiring plot mechanics in place of real emotions, absurd symbolism in place of depth, and a big hole in place of substance, Mahaan is somewhat watchable only because of Vikram. However, it’s painful to once again see the wonderful actor’s performance totally undone by weak writing and direction. From Susi Ganesan to Karthik Subbaraj, the list is getting long.

While watching the trailer of Mahaan, most people had the feeling that it’s all over the place. Our worse doubts are confirmed within the first thirty minutes of the film. If Karthik Subbaraj has organically developed the three central characters from the prologue – that’s set in 1968 – we would have had an interesting conflict. The three young boys we are introduced to in this part are named Gandhi Mahaan, Sathyavan, and Gnanam. You will get the dark irony behind these names in the narrative’s subsequent potions. Isn’t that smart writing? It’s almost as if the filmmaker chose the names thinking it would garner a special mention in Baradwaj Rangan’s review or in a fanboy’s decoding essay.

None of the characters feel real and Karthik Subbaraj keeps jumping from one moment to another without strongly establishing any emotions or feelings. Gandhi Mahaan’s wife, Nachi (Simran) or his father-in-law are uni-dimensional as well as downright annoying. Only Vikram as Gandhi Mahaan attempts to get into the skin of his character. But even he isn’t given that much space as Karthik Subbaraj rushes through important character moments or transformations through ill-advised montage. He has promised us a father-son conflict played by real-life father-son actors. So the filmmaker wants to get to that asap.

What might have gone through the filmmaker’s mind? Maybe this: “don’t worry I will throw in a cool fight sequence, few wonderful slow-mos, and all you need to do in turn is believed that the basis of conflict is perfectly set. The righteous commerce teacher Gandhi Mahaan – thanks to his friend Sathyavan – is now the head of a liquor empire. You bought into Walt’s drug empire in ‘Breaking Bad’, right? It’s just like that. Now come on let’s get to the ‘exciting’ combo of Vikram-Dhruv Vikram and don’t forget to praise my ‘complex’ themes.”

When Karthik Subbaraj made the switch in Pizza or Jigarthanda or Iraivi, his characters were well-written. In spite of the narrative incongruities, they felt like real people. Bobby Simha’s Sethu in Jigarthanda was well-established as the sociopathic gangster that though the post-interval switch was a bit jarring, it kept us totally engaged. I didn’t fully buy into Karthik Subbaraj’s alleged deconstruction of the gangster genre in the second half of Jigarthanda. Nevertheless, it was intriguing to watch.

With Iraivi, he explored themes that are somewhat taboo for mainstream Tamil cinema. Furthermore, the symbolism of the goddess in Iraivi is beautifully intertwined with the character conflicts and the scenarios. The recurrent Gandhi imagery is only tiring and burdensome. It’s more like a prop to conceal the screenplay’s inherent weakness. Some of the writing choices made me pause and think.

One is the appalling way Subbaraj has written his female characters in the last two films. In Jagame Thandhiram, Aishwarya Lekshmi’s character is introduced as a single mother. But later, he slyly mentions that she is quote-unquote ‘a proper heroine’ for our hero. In Mahaan, Simran’s character was written in a more contemptible manner. When a seemingly honest government official tries to bring down Mahaan and his empire, he is inventively murdered. Before that the filmmaker shows us that the official is not-so-honest. Dark humor doesn’t come across as the only intention here. 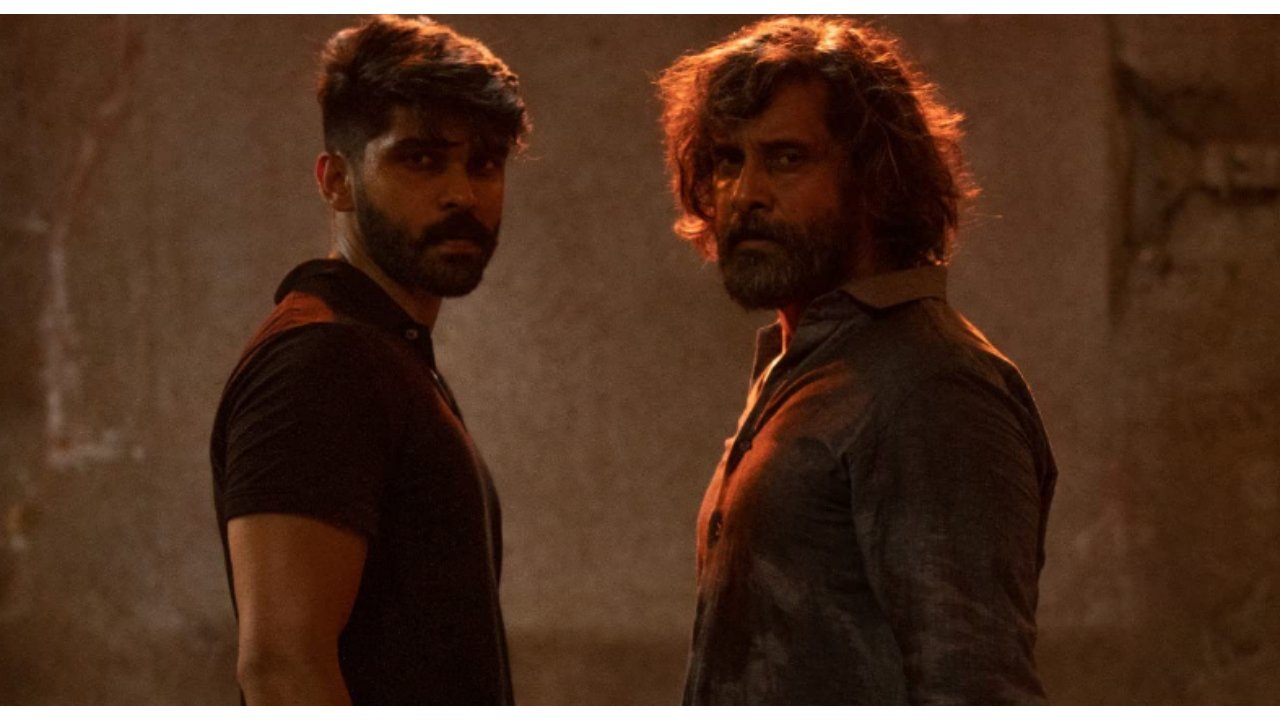 Mahaan gets relatively better in the second half. It felt like that because the first-half was only about establishing the age-old tropes of gangster drama. We are promised a more fresher territory in the later-half. Of course, it’s still populated with unreal characters and implausible situations. Moreover, there’s not much surprise in Mahaan when Karthik Subbaraj makes the switch by introducing us to Dhruv Vikram’s Dada. Still it was good to see the vulnerable side of Vikram’s Gandhi Mahaan even though his vulnerability seems too much at times.

The final stretch involving Mahaan’s master plan was unintentionally hilarious. However, one standout sequence that bears the Subbaraj touch was Sathyavan’s confrontation sequence with Gandhi. There’s something exceptional in the way the inevitable explosion is staged. Both Simha and Vikram are phenomenal in this sequence. If only we had cared more about these characters, the moment would have had a deeper emotional impact.

Mahaan’s problem is eventually this: the filmmaker has a trajectory in mind and has come up few interesting individual scenes which he thinks would be enough to strengthen his weak structure.  The execution also falls flat in lot of sequences. For instance, the killing of Sathyavan’s son, Rocky. The dialogues and the performances of both Sananth and Dhruv were very atrocious that we eagerly wait for it to end. At least if Karthik Subbaraj has spared us from his half-baked philosophies, Mahaan would have been a ‘so bad, it’s good’ movie. The filmmaker presents us his thesis statement through Gandhi’s quote before the opening credits.

An insatiable anti-hero arguing for his right and freedom to sin. This does seem interesting on paper. But Karthik Subbaraj twists and turns the narrative to largely accommodate his statement. Furthermore, he doesn’t trust his audience enough to spell everything out. Trying to impose narrow-minded moralism is an act of extremism. Nevertheless, when Vikram’s Mahaan passionately argues that people in the society drink only because it’s an individual’s choice – which again looks like the director’s statement – we can perceive from where he is coming from. It comes across as a very Mani Ratnam or Shankar’s way of looking at things. Not everyone has the freedom to sin or make mistakes. They are rather forced to do it.

Apart from Vikram, Santosh Narayanan’s musical score is a saving grace of the film. There might be a lot of appreciation for Dhruv’s ‘swagger’ and ‘style’. All one could say to that is, let him first try to act. The reason for his character’s psychopathy is very flimsy, and Dhruv’s loud screen presence only makes it more silly.  Some might claim that there’s something quote-unquote ‘very meta’ here. I agree. We could almost feel the pain in Vikram’s eyes. He is not playing Gandhi Mahaan in the later half of the narrative, but he is just playing himself. Particularly after the Varmaa/Adithya Varma fiasco, Vikram seems anxious for the general public to accept Dhruv as an actor. Maybe that’s the real burden of legacy Karthik Subbaraj is getting at.

Now let’s hope that at least after ‘Mahaan’, Karthik Subbaraj will learn a ‘Paadam’ (lesson) before making another ‘Padam’ (film).

Mahaan [2022] ‘Prime Video’ Review – Calling It ‘Ridiculous’ is an Understatement