Home»OTT»MUBI»Mr Bachmann and His Class [2021] ‘MUBI’ Review: A Hope-Full Insight into A Unique Classroom
MUBI/Reviews

Mr Bachmann and His Class [2021] ‘MUBI’ Review: A Hope-Full Insight into A Unique Classroom

Mr Bachmann and His Class [2021] ‘MUBI’ Review: The SEL, or Social-Emotional Learning, is a learning model that most educators are seeking to adopt across educational institutions around the globe. It seeks to fuse the social skills of a child with their emotional capacities to enhance their learning during their developmental years. The idea is that this learning model will help a child harness positive relationships around them by recognizing them and, in turn, making informed decisions. This model of learning is starting to become more significant with each passing day in a cosmopolitan world order, where schools promise to bring together children of varying nationalities residing in diverse socio-political orders together.

In this 218-minutes long, German-language documentary, Mr Bachmann and His Class (Herr Bachmann und seine Klasse), directed by Maria Speth, we are transported into one classroom (precisely, 6B) where a teacher promises to revolutionize the process of teaching by adopting a unique method which, in retrospect, is quite similar to SEL.

The documentary spans six months of an academic year in the life of the students under Mr Bachmann, the titular educator who dresses in comfortable jeans and woolly hats. He gives out an impression of a retired rock band performer. The filmmaker makes no efforts to outline the narrative using a third person, allowing the viewers to soak in the atmosphere of the city before leading us into the said classroom. It feels as if we were, ourselves, a part of the classroom – thanks to the camera that sits patiently around to capture the many moods of the students as they progress through their class with the teacher. 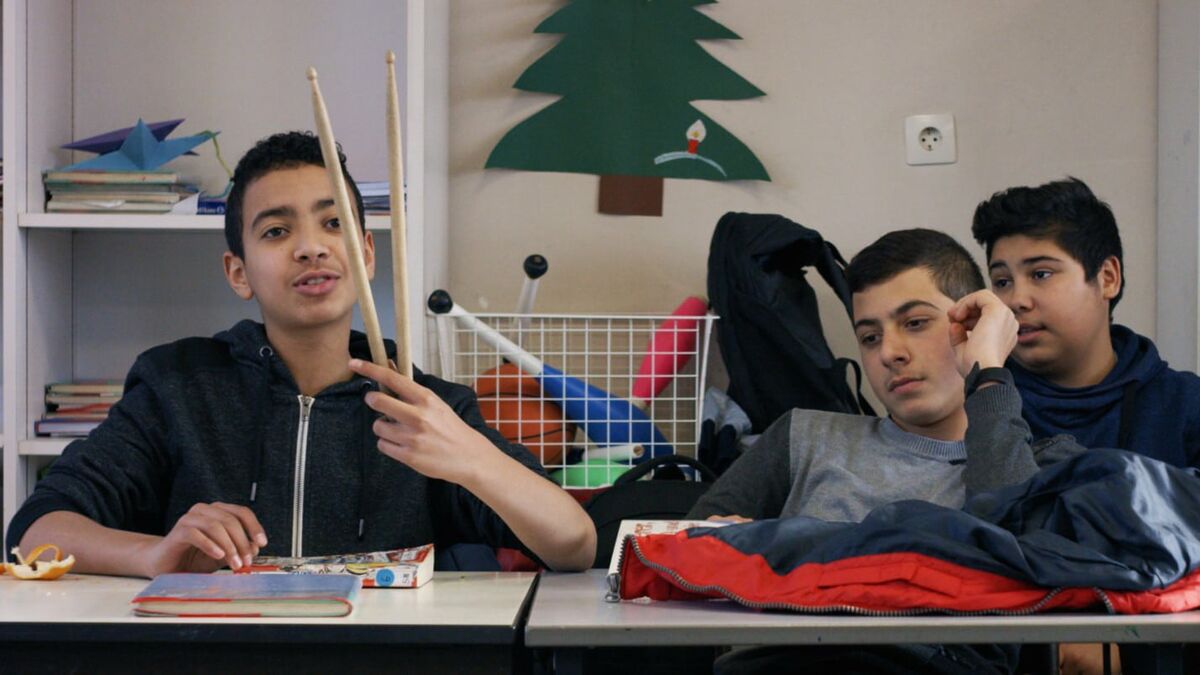 It doesn’t shy away from showing us the naughtiness these kids are up to – playing, yawning, giggling, and answering questions from time to time. We also find them relaxing by putting their heads down on their desk before beginning the lessons for the day. Both the teacher and the students are equally communicative in their emotions and understanding of their multicultural heritage – a teacher-student bonding so fictional that I had to double-check about this film being a documentary. After participating in so many lessons with them on the screen, it felt heartbreakingly real when the final goodbyes were exchanged between the students and the teacher. I can’t tell you that I wasn’t a little emotional myself. The experience is immersive and enlightening, promising to tickle you with fun that, I am sure, many of us wish we ourselves were a part of growing up.

However, the duration of the documentary takes a much-deserved toll. In some portions, we lose track of the topic in sight. I cannot disagree that, in retrospect, it seems to have featured too much of the backdrop of the city or the children’s reactions while being mindful that the length was necessary for the immersive experience. A classic Catch-22 situation!

Mr Bachmann dabbles with a lot of subjects, from art to math. We see him in one-on-one conversations with a few students, explaining why they must concentrate better on one subject (mostly math) or another. Most fascinatingly, the classroom doubles up as a music room. The documentary inaugurates with Mr Bachmann teaching his class a story about a guitar and a table. If we pay attention, we will be amazed to find how the narrative of this seemingly weird tale increasingly highlights ideas about relationships while being equally informative about a guitar. 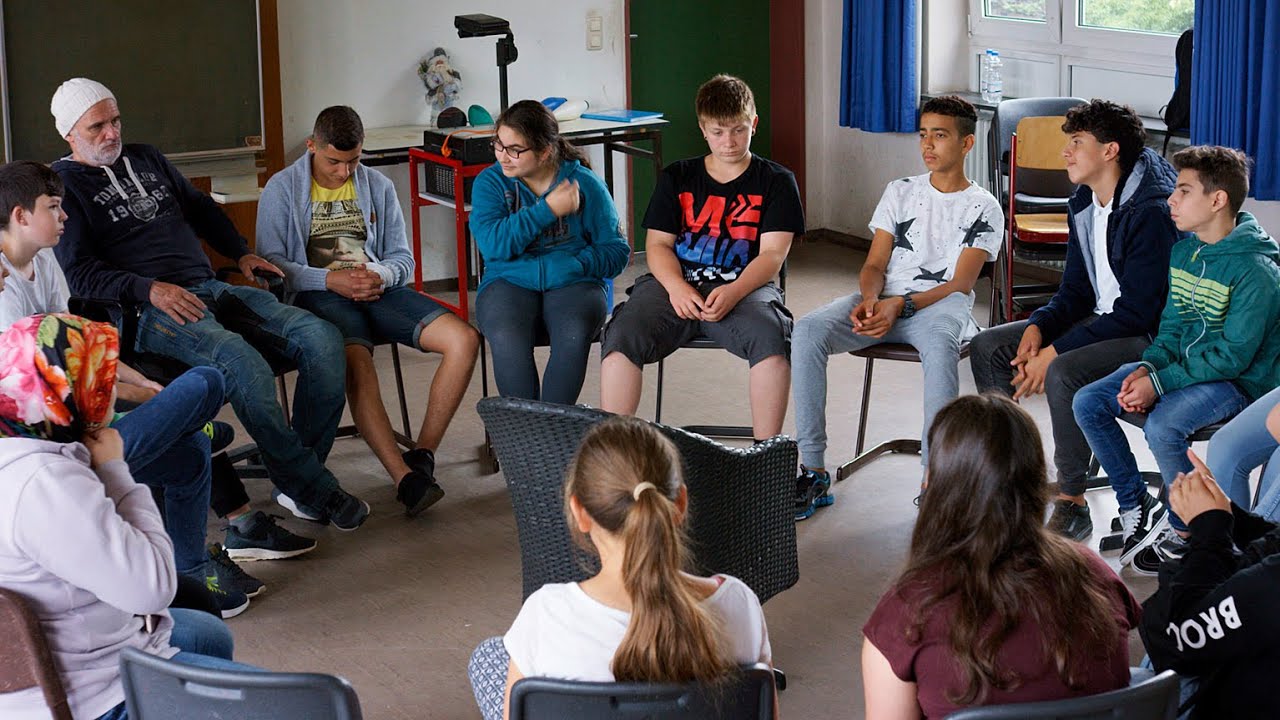 It certainly is one of the best ways to practically explain SEL to the parents in the audience who might be ambiguous about the new system replacing the traditional read-write-byheart method of learning. We are also offered insights into the classrooms of Mr Bachmann’s colleagues, who seem to be respected and well-liked by the students. They seem to practice SEL to lay out the local history, which is fraught with tensions and migrations, to the students, a diverse bunch themselves. It was nice to find them all liberated in their identities in a classroom – too unreal for my experience of elementary school education.

It is interesting to note here that just because the documentary gives an insight into a new learning model, it doesn’t precipitate into utopia. We see Mr Bachmann, who is otherwise always friendly and understanding towards his students, dealing with a few challenges. He remains calm and without being a pushover, rebukes his student when he is issued a false excuse. In another instance, we find him sitting through a conversation about homosexuality being called ‘disgusting’, ready to throw up a challenge to help understand the same better.

I don’t know enough about the German education system to be able to speculate upon the intricacies of Mr Bachmann’s preached mode of learning. I can only tell you that as a student from the Global South, the idea strikes me as revolutionary and utopian. I am glad that the filmmaker captures this colossal everyday drama within the confines of a classroom in a traditional school setup. The effort pays off. We are left with a realization about the importance of education and the learning model, secretly hoping that these children grow up with a better understanding of the world around them. That, and only that apart from this beautiful documentary, shall be the finest tribute to Mr Bachmann.

Mr Bachmann and his Class is now streaming on MUBI

MUBI CATALOG DIFFERS FROM COUNTRY TO COUNTRY, WHAT’S PLAYING IN THE USA MAY NOT BE PLAYING IN INDIA AND VICE VERSA. THE SAME GOES FOR USERS FROM ANY OTHER COUNTRY. HOWEVER, YOU CAN ACCESS ALL THE FILMS LISTED HERE USING EXPRESSVPN. EXPRESSVPN IS FAST, SECURE, AND UNLOCKS MUBI CATALOGS FROM AROUND THE WORLD. GET EXPRESSVPN FROM ONE OF THESE EXCITING DEALS.

Mr Bachmann and His Class [2021] ‘MUBI’ Review: A Hope-Full Insight into A Unique Classroom