A gentle touch of originality and a push around the corners are all that genre movies need to be original in their own right, and at times, even subversive. Such genre exercises prove to be exciting in the short run, exploring the uncharted space of the genre. However, even if they gradually lose relevancy, they still appear interesting in their own right. Such experimentation is important in reflecting upon the small twists made on a lengthy rope of cinema, largely affecting the broader innovations for how cleverly they are done. Kannada filmmaker Raj B Shetty does something similar with his sophomore film Garuda Gamana Vrishabha Vahana (2021).

On the surface, and scratching below that, this is a gangster drama. One that’s defined by the regular visitors- crimes, feuds, camaraderie and rivalry. It shuns no opportunity for relentless blood- which never develops a clot from the beginning to the very end. The film doesn’t even have a single woman in the picture, except the invisible mothers who nursed these men and the insignificant wives who wedded them. It shuts the corridors for obvious, grounded politics. And yet, these aren’t flaws or obstructions to the film’s fluidity. These are the floodgates that are locked to keep the consistency rather going. This is one of the numerous powerfully conceived innovations of the film. And yet, it’s that gift that’s not content at keeping on the subtle art of giving.

Hari found an intimate brotherhood in the mysteriously unclaimed Shiva quite early. They’re clearly not the same. Hari is outspoken but also actively engaging with the world around him. Shiva withdraws from the world and destroys everything that seeks control over him. These are such visible incarnations from the most revered two of the holy trinity. Hari will grow up to be a ganglord with rivalries, dreaded respect and a rich engagement. Shiva’s world is well shaken with an unknown, ferociously orchestrated Tandav already. He may be, like Shiva, Kamantaka, or the destroyer of love. For one, he’s certainly Rudra, the bull riding angry one. But once politics and a string of jealousy get suspended, the diamond-coated metallic bond gets on the verge of a break. 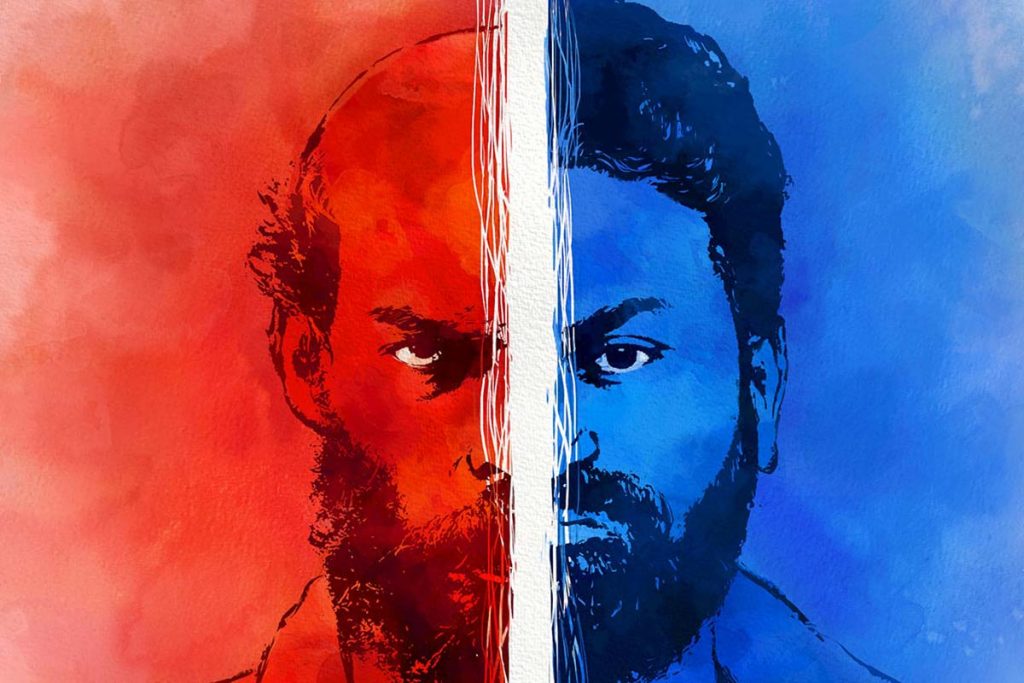 It’s severely tested as the twisted path of love invites the entry of Brahmayya, an SI officer reluctant to enter into the arena of fire and ice in the town of Mangla Devi. But Brahma completes the divine Trinity, however fearful he might be.

Shetty carefully, intriguingly sets the stage to play out this Mythological play. So vibrantly informed is this sense of myth-making that it starts to inform the tightness of moviemaking, thus enhancing it. Debut cinematographer Praveen Shriyan wonderfully captures the chaos with decided minimalism. There’s an entire stretch of a tiger dance procession during the festival of Dussehra. While it’s not a secret that powerful people use such religious occasions to mobilize arms and blood, it has been underplayed. This, so we actually see how normal the festivities look on the surface to the ordinary people. The end to this sequence is an electrifying Tandava performed by Shiva- which almost turns into a catharsis to the weight of anger. And this has been deftly captured by Shriyan’s economical approach to camerawork.

As an aural experience, GGVV is at its most immersive. The compositions by Midhun Mukundan are as contemporary as they get. But without overdoing its pop culture value, it masterfully captures the essence of the film’s mythos. It coexists with the cogent work that has been done by the sound team. You’ll find yourself intrigued as sound alternates from one earpiece to the next. Above everything though, I liked how cleverly the film veers away from the usual flavour of Indian gangster cinema. It dodges the usual rusticity and butchering grittiness coated with hyper-masculine energy. It does have hyper-masculine energy, but it isn’t a necessarily rustic film. At times it’s funny and charming. Often, through all the action you feel as if you’re watching something uber-cool. Despite the hardcore realism, you feel that the mythological nuance of the film is being fabricated into a comic-book setup.

The performances are masterful. I can’t really say that they’re the most perfect aspect of the film. However, without their intensity, ‘Garuda Gamana Vrishabha Vahana’ would have really fallen apart. Raj, who also starred as a lead in his debut Ondu Motteya Kathe (2017), continues this streak. He plays Shiva, the film’s most complex and compelling character. Of course, the nearly toxic nature of its mythical entity helps the performance. However, imagining the god of destruction as an assassin needs a degree of conviction. And we’re certainly offered more than that. At first, Hari might feel a less surely written character. However, Rishab Shetty is wonderfully convincing in dressing the character with corruption and opportunism.

Also, Read: A Critical Examination of The Sopranos

Gopalkrishna Deshpande is a stunning revelation as Brahmayya though. As a presiding SI officer who is fearful but commanding, he opts for banality to deliver even the thrill of the plot. It’s a confident performance delivered for the most smartly written character of the film and my personal favourite.

Where are the women, you ask? As I said, the film cages itself inside the world of dominant patriarchs. And because the emptiness is felt, we’re presented with a scathing critique of the violence and its sheer mindlessness. It’s felt the most in the poignant climax, which is muted in comparison to the rest of the film but also effective enough to drive the point. In the ancient texts, we hear of one Aadya, the Mother Supreme who birthed the Holy Trinity. In the film too, the action gets processed and returned to the town of Mangladevi in Mangalore. Visibly, it’s named after the goddess. It’s an incredibly nice touch in a film full of them.

Each and every minute commits to your experience in Garuda Gamana Vrishabha Vahana. However, I found myself gripped less in the second half. There are portions that are particularly disinvesting in the two-and-a-half-hour running time. Also, the teased arc of homoerotic underscore in Hari and Shiva’s relationship could have been fleshed out. The background music disappointingly shifts to a masala flavour at times, which the film clearly didn’t need to operate with. However, everything’s made up for by the genius with which Raj orchestrates the drama. He has crafted a poignant, innovative and intelligent gangster film that calls against crime.