The sub-genre of epic dramas set during the Medieval times, drawing inspiration from Arthurian and Shakespearean tales (or retelling the legends of King Arthur and Shakespeare’s plays) reached a peak with Ridley Scott’s Gladiator (2000) and The Lord of the Rings trilogy. And while audiences warmly accepted them in the mid-2000s, their appeal started to wane until Game of Thrones (2011-2019) became the hottest thing in the market. In 2021 alone, we have witnessed the likes of The Green Knight, The Last Duel, The Witcher Season 2, and now The Tragedy of Macbeth, with The Green Knight and The Tragedy of Macbeth making great strides in terms of representation by stepping away from the stereotypical casting of kings and knights. So, this is clearly a good time to be a fan of this particular sub-genre.

Based on William Shakespeare’s play, Macbeth, The Tragedy of Macbeth is written on the screen and directed by Joel Coen. Hardcore fans of the Coen Brothers will be privy to this information, but here it is anyway: The Tragedy of Macbeth is Joel Coen’s first solo project. Hardcore fans and people who were forced to read Shakespeare against their wishes during their school days already know the story of Macbeth. So, this synopsis is for those who don’t fall in either of these categories:

The narrative largely follows a brave Scottish general named Macbeth (Denzel Washington). He’s confronted by a trio of witches (all played by Kathryn Hunter) who say that he’ll become the King of Scotland, while his friend Banquo (Bertie Carvel) won’t be king but will bear many kings. After King Duncan (Brendan Gleeson) crowns his son Malcolm (Harry Melling) as his heir, Macbeth is consumed by ambition. Spurred by his wife Lady Macbeth (Frances McDormand), he sets out on a path of murder and bloodbath to preserve his place on the throne while ensuring neither Malcolm nor Banquo’s son Fleance makes a move to overthrow him. 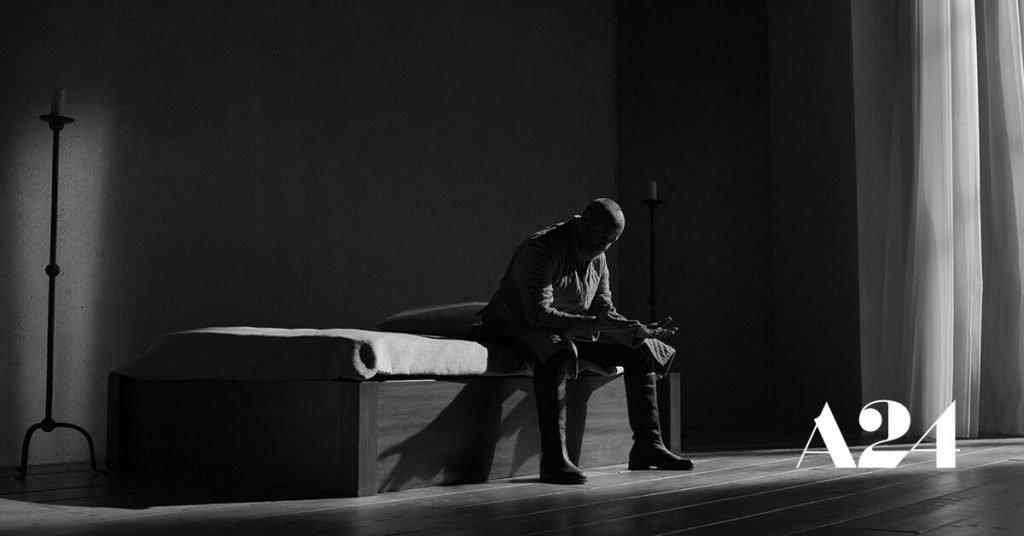 Let’s start with the most obvious aspect of The Tragedy of Macbeth: the acting. As you might have figured out from the promotional material (or if you have watched the movie) that the dialogue is just like it’s in the play. And it can be a little tough to digest because we’re not at all used to hearing people talk like that. It’s fine when we’re reading the play. But as soon as words like “whomst”, “art”, and “thou” come out of a character’s mouth in live-action production, the chances of the audience disassociating with it really spikes up. It needs a special level of proficiency to make the performance relatable and accurate to the source material. That’s essentially what every actor in this cast does, while surprisingly adhering to their own accents instead of trying to speak in one that doesn’t come naturally to them.

Related to The Tragedy Of Macbeth: Throne Of Blood [1957] Review – Akira Kurosawa’s Misfire

The first actor that you get to see is Hunter as one of the witches, contorting, posing, and talking in the oddest of ways. However, as the camera gets close to her, you notice the human-like qualities in her, thereby successfully absorbing the unfamiliar dialogue. That said this technique is kind of reversed for the stars of the show i.e. Denzel Washington and Frances McDormand.

Without a shadow of a doubt, Denzel and Frances bring in their A-game for Joel Coen. In their close-ups, they give off the feeling that they’re in a play. As in, they are acting for a live audience instead of a camera (in a good way). But it’s during the widely-framed shots where they use their physicality to help you understand that despite their theatricality, Macbeth and Lady Macbeth are just misguided human beings. McDormand is absolutely stunning in her sleepwalking scene as she pours her heart to express the kind of anguish Lady Macbeth is experiencing.

Denzel is hypnotic throughout the runtime of the movie. However, it’s in the movie’s final act where he lets go, unleashing even his acting skills which we’ve seen in The Equalizer (2014). While Gleeson as Duncan, Melling as Malcolm, Carvel as Banquo, Alex Hassell as Ross, Moses Ingram as Lady Macduff, Ralph Ineson as The Captain and Stephen Root as The Porter are brilliant, it’s Corey Hawkins as Macduff who stands out amongst the supporting cast. Despite knowing everything about Macbeth, Hawkins gives such a fiery speech brimming with sadness for the loss of his wife and children that it’ll get you misty-eyed. And then he goes toe-to-toe with Denzel in the climax in a mind-blowing fashion.

Coming to the rest of the stars of the show, please feel free to kneel before Joel Coen to pay your respects for his expert direction. With the help of production designer Stefan Dechant, art director Jason T. Clark, set decorator Nancy Haigh, cinematographer Bruno Delbonnel and the VFX team, Joel manages to walk the line between making The Tragedy of Macbeth look like a theatre play and a movie. That actually accentuates the movie’s proximity with the source material i.e. a play, thereby being more reminiscent of Orson Welles’s Macbeth (1948) than sharing any similarities with the recent adaptations.

The choice to make the film black-and-white can be chalked up to an attempt to give it an antiquated appeal. But it goes a little further than that. The last time a Joel Coen movie was in black-and-white was The Man Who Wasn’t There (2001) to play into its crime-noir roots. And he reuses that aesthetic to portray The Tragedy of Macbeth as a crime-noir which happens to be set in the medieval ages. Hence the long dark shadows cast by the castle columns look so ominous and the crisp edges of the minimalistically crafted interiors frame every shot like a painting. So, if you can, watch it on the biggest screen possible with the best sound system, because the sound design by Craig Berkey and score by Carter Burwell are just that good.

There are no new takeaways here because, as mentioned before, Macbeth’s tragedy is a tale as old as time. The story has been interpreted, reinterpreted, and reinvented from almost every angle possible. Joel Coen knows that. So, he reiterates the classic story of greed, ambition, guilt, and the eventual victory of good over evil (albeit with a shade of fear that the cycle is going to continue) as directly and simply as possible. And it works. You can very well draw parallels between Macbeth and present-day tyrants who are devaluing human life due to their hunger for power. But even if you don’t, The Tragedy of Macbeth will enthral you with its visuals, the storytelling, the sonic expressions, and of course, Corey Hawkins, Denzel Washington, France McDormand, and the rest of the cast’s performance. It’s positively one of the best films of the year and yet another Joel Coen classic.

The Tragedy of Macbeth is now streaming on Apple TV+

The House (2022) Netflix Review: A Straightforward Stop-Motion Stunner with An Imaginative Horror Story