There’s an assuredness to the direction of The Last Duel (2021). In a film dealing with rape, its implications, and its consequences, the opening half an hour gives no clue of it. It starts with the eponymous confrontation and abruptly shifts to years in the past, following a fairly generic first thirty minutes for a ‘historical epic’ with battle scenes, fathers and sons discussing their lineage, brothers in arms pledging their allegiance, and all that jazz. For a while, it risks becoming another one of Ridley Scott’s latest ventures into big-budget filmmaking – characteristically immersive yet all too familiar. These are mere red herrings though and the revelation of the reason behind their inclusion, in hindsight, only enriches the experience as the mature work of a seasoned veteran of this terrain.

The Last Duel (2021) is divided into three stories, each from the perspective of its three lead characters. While Adam Driver and Jodie Comer are perfectly fine in their roles as Jacques le Gris and Marguerite de Carrouges respectively, Matt Damon as Sir Jean de Carrouges is hardly so. It isn’t his ability that is the problem but his presence, which despite his Amish appearance for the film does not make him convincingly look like a medieval feudal master. Ben Affleck as Count Pierre, a frightfully hedonistic lord, is the most curious casting choice. It is hard to tell if he’s playing a parody of such characters or not but his blonde hair and beard are amusing enough to divert from pondering over his acting too rigorously.

The three perspectives that are presented through each story are excellently executed. In each, the one whose perspective we are viewing is evidently the protagonist, with little or nothing that puts them at fault. Minor changes in incidents with major ramifications take place in accordance with their view of themselves and their memory. What is most striking about them is the subtle manners in which Scott makes each character own their story, without any visible change in the style of filming.

Sir Jean, in his mind, is a fierce soldier and a fair husband, whose life is characterized by the unfair treatment meted out to him by Count Pierre as well as his peers. His world has grand, wide shots of castles looming over highlands, ones he wishes to be master of. Yet he is so unfairly treated by his peers that when receives his payment for his job, the injured and exhausted man has to founder by himself with his heavy load of the gold coins. Jacques le Gris’s life is precisely inside these castles, in their comfort that Sir Jean so desperately covets but, in his own outlook, there is barely any romance in it. He is not lacking in wine and women but rather has little interest in them as he always seems to be burning the midnight oil in service of Count Pierre and pursuing Marguerite, someone he views as a rare example of the fairer sex who is his intellectual equal. 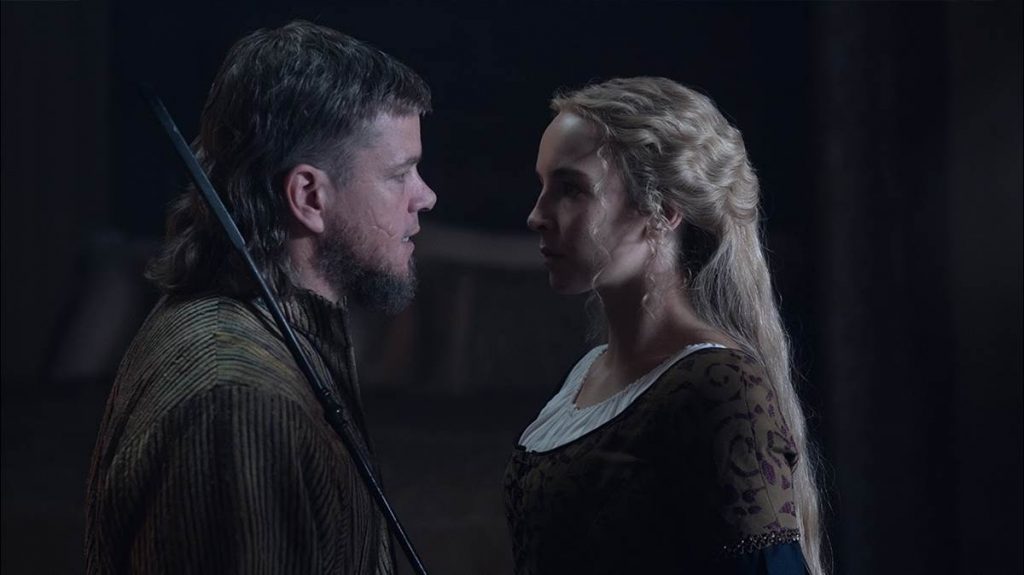 Marguerite’s story has her act most competently as an estate manager in her husband’s absence while also dealing with her impertinent mother-in-law. It is the only time we see her in public with open hair, her life not valued on the basis of Sir Jean or Jacques’s expectations and therefore devoid of the contortions her hair is put in in their presence while also erasing their chivalrous nature completely. It also has a shocking power in its portrayal of unrequited attraction, from the perspective of a woman unaware of it.

Depicting crime through the viewpoints of those it involves and not the incident of the aberration in question is of key importance in The Last Duel (2021). The similarity with ‘Rashomon’ is therefore not limited to the structure but is also extended thematically as the questions it deals with are of rape and honor. It is interesting to note how seventy years on, it is still a story about sexual assault that gets this varied perspective treatment. In one scene, a character proclaims that rape is a crime against the man whose wife is the victim, by virtue of the latter’s ownership by the former, not the latter herself. In another, while defending himself, Jacques tells Pierre that he did not rape Marguerite as her screaming objection is rendered to be a lady’s ‘customary protest’ by him. Marguerite herself, by letting her rape be known and put on trial, risks having to face an inhuman punishment should Jacques be proven innocent.

This kind of antiquated thinking may well be the reason behind the film’s setting as the offensive sensibilities allow a hyperbolic take on how sexual deviance has continued to be perceived through the ages. There is little else to admire in it with regard to its medieval French setting. It’s a fairly common and dull period world, with the Hundred Years’ War in its backdrop, devoid of color or pomp and rightly nasty in a sense. This culminates in a climactic showdown that is extremely dirty to witness yet is less about the event itself and what it implies in the context of societies where women are commodified in a dehumanizing fashion. Regardless of the outcome of the duel, Marguerite’s doom is fatalistically sealed, either through a shameful execution or a life of even greater subservience than the one, she already leads, out of gratitude.

Also Read: Spielberg (2017): A Modest Storyteller vs. The Spectacle

Ridley Scott, 83, alongside this and ‘House of Gucci’ next month is captaining two consecutive big-budget, studio films with period settings. As fascinating as it is to speculate about such creative fertility at this age, which is technically greater than when he was younger, the reason may simply be a shift from an extravagant approach to filmmaking. While The Last Duel (2021) has an exotic world, gone is his desire to create sensory exhilaration, and instead, his energies are focused on creating discursive works.

Scott shows here a command over characters and dramatic moments, a quality he never quite possessed even at the peak of his career. It is not a film interested in its world aesthetically as it is in its morality, including the cycle which allows it to continue which is portrayed in a potent scene between Comer and Harriet Walter. The result, therefore, is a film that is rare in the current climate, a work that raises topical questions while being universally appealing in its deliverance.

Number 26 (2021) Short Film Review: A Hypnotic Inspection of a Felony