In the two decades since its release, Gladiator (2000) has amassed a large number of fans and naysayers. While the former attest to the spectacle of the epic heroic tragedy, the latter are critical of its regression into a sentimental tale about patriotic machismo. While these complaints have obvious merit, it is a luxury to complain about this film today. In a world where commercial cinema is either superheroes saving the day or the tenth remake of a 1980s genre classic, the sheer scale and intent of ‘Gladiator’, to tell a most conventional revenge tragedy elevated to a mythical status should alone be a reason for revering it with childlike wonder. Indeed, it is an example of a film that is an exercise in all the basics of filmmaking done to perfection, from a splendid visual style that adds a modern, less lurid flavor to the vibrancy of 50s sword-and-sandal films to a plot that is paced and structured keeping in mind that no one is left behind and one that ensures constant intrigue.

And yet, Gladiator (2000), for all its merits, feels like an archetype of Hollywood’s penchant for the obvious. While on the level of craftsmanship, hardly anything can be faulted, what ensures its prevention from being held in the same vein as a Kubrickian epic is that it has a plethora of ideas and no desire to dwell on any of them. So what we get is a film that is more than worth the price of a film ticket because of its grand theatricality but one that does not make us do what great films almost always do – think. It is important to mention that the author of this essay enjoys Gladiator (2000) as much as the next person and has for years, if for nothing, then at least for the aforementioned reason of having certain originality in the homogenized world of modern big-budget filmmaking. Yet, there lies a number of directions the film could have taken, all of which are part of the film but only as parts and not actual concerns of it, which could certainly have made it more akin to ‘Blade Runner’ than ‘Black Hawk Down’.

The downfall of Maximus, from a universally esteemed General with a cap studded with feathers to a pathetic slave is an obvious plot device to make us anticipate his eventual return to his former glory. And while he does, thankfully, the film does not go too far with this triumph. Maximus is seen by the dying Marcus Aurelius as his rightful heir but not to perpetuate the Pax Romana but to turn Rome into a republic again. His reasoning is sound – Maximus is a simple man, not corrupted by the duplicity of politics. He can help with the transition with a militaristic straightforwardness. So, had the film, instead of taking its obvious route of making us invest in Maximus’s revenge, focused on showing an epiphany through his plight, it would have made him a more sympathetic character through reason than sentiment.

Through his demotion from being one of Rome’s highest-ranking citizens to an undignified member of the subaltern, Maximus could have experienced firsthand the need for an egalitarian society. Now of course, in the end, Lucilla does uphold her father’s wish, and Rome, against real events, becomes a republic. Yet hardly anyone cares for this as the idea of ending the monarchy is only a ruse to give Maximus a greater purpose in his revenge. If he fulfilled Marcus Aurelius’s wish because he was capable of seeing the status of a bottom-feeding class in a monarchy through his experiences, he would’ve become a rebel because of his beliefs and not because of the audience’s expectation of him. 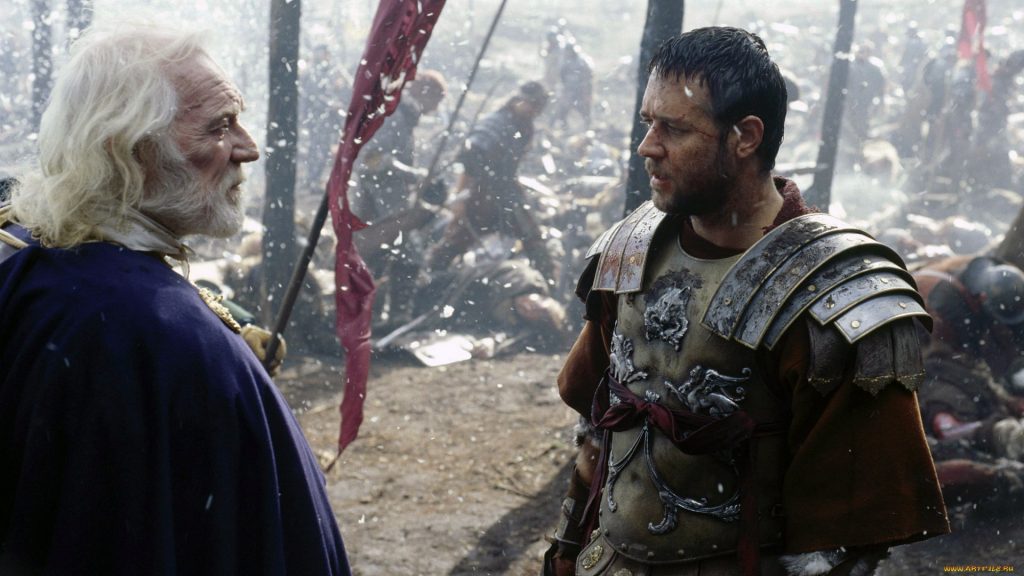 Through his time as a slave, he could have seen the dirt of Rome his patriotism blinded him to, the ‘glory’ he so proudly proclaimed being a defender of. Not only does the film never take this route, instead, we are given a character with clear royalist sentiments. When Proximo talks about the day he was freed from being a gladiator by Marcus Aurelius, Maximus scoffs at the idea that someone in the former’s lowly position could have ever faced the Emperor. What we get then is a character being used to convey a democratic idea that he himself does not subscribe to except during rousing speeches about the glory of Rome. A character by no means suited to reinstating a democracy again.

Commodus is a most interesting possibility in the context of the plot. Being a son ignored by his father and reeking of entitlement, he is the most obvious choice for the role of the antagonist. He is ambitious and wishes to turn Rome into a military dictatorship. Had the film been about him, he would have made a spectacular anti-hero. While the narrative turns him into a cruel sadist who we must hate, he had all the qualities of a beloved Emperor, as per the dictates of the film and not real history. What we get here is an approach very similar to the binary treatment of politics in such films, where ambition is the equivalent of villainy and a good heart is central to the makings of a just politician or leader.

As Senator Gracchus mentions, ‘Rome’s glory is not in the marble of the Senate but the sand of the Colosseum’, Commodus is the one character completely in tune with this idea and willing to practice it. He understands the love the Roman populace has for extravagant exhibitions, and he gives them exactly that. His incestuous yearning for his sister being the central consequence of his Oedipal disposition towards his father shows that he isn’t a moralist, an essential trait in ambition. He is clearly not a whining brat but one capable of ensuring his people’s love for him.

Much like Macbeth, Commodus’s greatest tragedy is how he is simply denied any opportunity to be a leader, instead, his reign is relegated to hearsay about his incompetence and depictions of only his paranoia. Of course, the world in 2000 was not aware of Phoenix’s uncannily excellent acting abilities but given the privilege of hindsight, the possibility of him as a morally depraved but charismatic protagonist is too beautiful a possibility to not even consider.

Proximo is a character who upholds Marcus Aurelius’s dream. He is magnetic and authoritative in his demeanor. Above all, his love for the adulation of the public makes him see the combat sport as some sort of dance or theater. He is like Ben Gazzara’s character from ‘The Killing of a Chinese Bookie’, aware of the lowly state he occupies but not willing in the least to let that cloud his perception of himself as an artist. 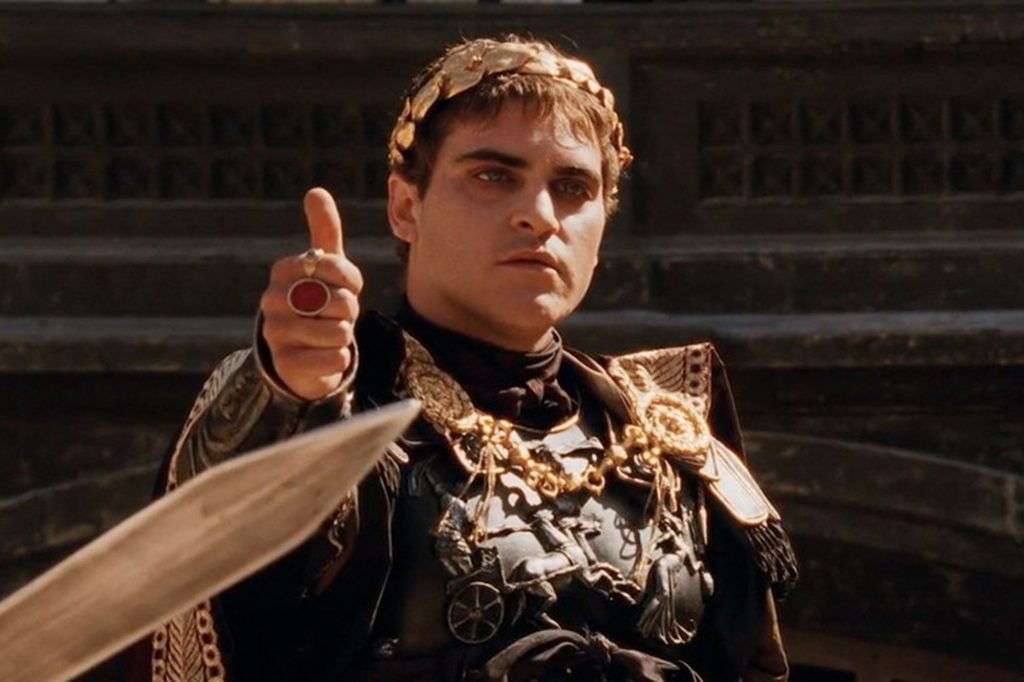 The brief glimpse we get at this side of him reveals a person who could easily have been a major character had the film taken the previously mentioned route with Maximus’s character. He defines the underlying idea of a democracy, in that a leader can be found anywhere and a system that evens the playing field is what is needed to discover them. He also has a cunning side, as can be seen from his refusal to help Maximus at first as the results of it are detrimental to his own livelihood. Then, he heroically sacrifices himself. While his eventual fate turns him into a romantic, he is a character well deserving of a greater role because he is evidently the most rounded among all the rest.

Or Gladiator (2000) could simply have been a detached, extravagant look at the sport itself. The re-enactment of historical battles that distinguished fights at the Colosseum from those in the provinces shows a sport that has a distinct histrionic quality to it. To be a film full of such contests, shot with drama and suspense with a protagonist for whom victory is not a means to an end but an end in itself would’ve been an aesthetic triumph for sure.

On the other hand, by portraying the violence at the heart of this sport and the sadistic love of the Roman people for it in spite of the carnage or loss of human lives, it could well have been a commentary on the moral vacancy of the Roman Empire that Maximus calls the light in a world of darkness, an age that is viewed as a golden period in political and artistic history and has been for centuries. It could have justified the choice of the film’s setting as having relevance to its intentions instead of being exactly what it is – a setting. No doubt that the Roman setting is what creates the aura of amusement that surrounds the film but to detach itself from the purpose of a setting again shows a desire to not go beyond the spectacle and the presentation.

These ruminations are all offshoots of elements from the film itself, not imagined by merely using the setting or plot while ignoring the rest. Gladiator’s greatest weakness is how despite the opportunities it has at its disposal, it chooses to stick with the road always taken, a choice not unique to it in its class of films but one certainly more visible when noting that it’s directed by Ridley Scott, once among Hollywood’s most interesting big-budget auteurs. There can be a hundred permutations of elements within the film which are being overlooked here yet the greater number, the more it proves the degree to which such missed chances are commonplace in films of the kind.

As directors like Denis Villeneuve are bringing back audience agency when interpreting a film, which is not clouded by studio dictation and spoonfeeding of plot and characters, to view films like Gladiator’ or ‘Munich’ in order to see what brings them apart can be a decisive exercise to reign in an age when the budget of a film is not inversely proportional to the amount of discourse it gives rise to and when spectacle does not decry thought.