“Every human being has a basic instinct to help each other out.”

Given that Ridley Scott resume consists of two of the greatest Sci-Fi thrillers, Blade Runner & Alien; epic & grandeur films like Gladiator & American Gangster; disastrous epics like Exodus & The Counselor; The Martian (2015) falls somewhere in the middle which comes as a commercially viable Sci-Fi film for all age group that educates you on science well enough to make it sound smarter & cooler.

Based on Andy Weir’s popular but meticulous self-published novel of the same name, The Martian (2015) smartly dodges the ‘heavy’ dosage of science fiction zone, does not dig at all into the psyche of an astronaut stranded on Mars for more than 4 years (this part reminded me of Sam Rockwell’s terrific performance in Moon and even better writing dealing with the psyche of a lonely astronaut), avoids the philosophical aspect that has been second most savored aspect by many space films. Rather, Scott blends the humane story with plausible but respectable science theory, serving it with the dash of unexpected humor and quite endearing central character, making ‘The Martian’ a rare Sci-fi popcorn epic that has blockbuster written all over it.

American astronaut cum Botanist Mark Watney (Matt Damon) is on a mission on Mars along with six other crew members. The mission is called off after a ferociously blazing dust storm hits the concerned zone. While evacuating the area, debris and antenna hit Mark Watney leaving him unconscious. Fellow crew members reluctantly leave him behind assuming that he is dead. Mark wakes up injured the next day & starts on the pessimist note calculating the days he can survive, eventually after all the hope fades away he starts thinking smartly and relies on his survival instinct. He uses all the resources at his disposal quite effectively to lengthen his survival days until when he successfully makes a contact with NASA about him being alive and the rescue team comes to save him. 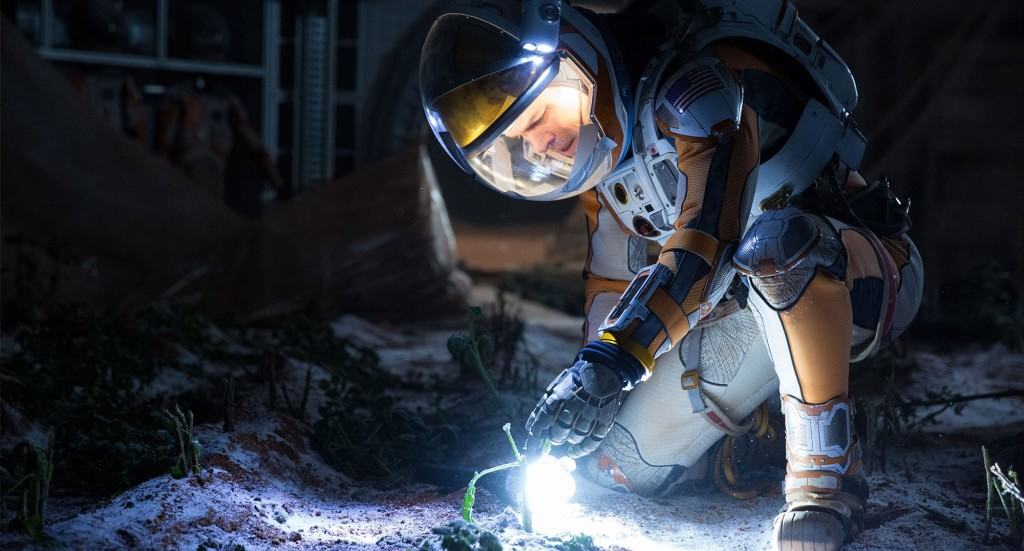 It is quite amusing to see how Mark put his Botanical and scientific knowledge pragmatically to make water and grow potatoes on the planet without much fuss like it was a cakewalk given that Mars doesn’t support life. But who gives a two fcuk if it has been done entertainingly, after all, it is a science fiction bitch! Aware of the fact that Mark is alive and they need to send the food supply to him before a rescue mission is planned and put to effective, people who are involved in designing the rescue mission brings a new set of ideas to the table and talk a shit load of science, along with sharing the anxiety and guilt over Mark being stranded, alleviated intermittently by exchanging ‘instant’ text with him like they are using Whatsapp, meh! So many characters exchanging gobs of dialogue seems to follow Sorkin’s style of writing and it works quite well, mostly. But there seems hardly any character development except for Matt Damon’s Mark. It does not collectively add up to an emotional wallop that it seemed to intend to, by the time it reached the climax where the tensed sequence is little stretched.

Related to The Martian (2015): Sunshine (2007): Integrating Science and Religion

Coming to the science (fictional) part, not that everything in The Martian is airtight science. For starters, not many science experts would suggest duct tape and a tarp as dependable space repairs. It doesn’t boost great VFX of space, and even space & zero gravity maneuvers are not sleek. There was a potential for The Martian (2015) to conflate the emotions and the right amount of substantial science fiction tied together with little more smart writing, but rather it tries to manipulate the characters and situation in a way that pleases the crowd. Ya, it does work too. But every problem was solved without much struggle that makes it hard to believe in the character.

Having said that, The Martian (2015) celebrates the scientific spirit, necessity turning into creation, hope ensuing survival instinct, guilt washed off by risking the life of 5 people to save one person (Saving Private Ryan). The Martian is a good watch and an endearing performance by Matt Damon ensures you root for him even though you know the end result.

The Martian (2015) is currently streaming on Hotstar