Satirizing the traditions and beliefs where the old are set against the new, "White Sun" observes the dilemma of well-rounded characters and their baggage with each other through death and change. It also observes the guilt, transformations, and freedom that something as stark as war can bring into some people's life. With a light touch and absurd comic situations, Rauniyar's film slowly and assuredly becomes an important piece of cinema which gives to all the viewers an opportunity to look into the world we live in or should know about.

“White Sun”, the title of Deepak Rauniyar’s sophomore Nepalese drama refers to peace. The peace that is neither as peaceful as it seems on the surface nor as easy as it is supposed to be. Balancing detailed and intimate human drama with sharply observed political delicacy, Rauniyar’s film beautifully encapsulates the post-war scenario in contemporary Nepal. Satirizing the traditions and beliefs where the old are set against the new, “White Sun” observes the dilemma of well-rounded characters and their baggage with each other through death and change. It also observes the guilt, transformations, and freedom that something as stark as war can bring into some people’s life. With a light touch and absurd comic situations, Rauniyar’s film slowly and assuredly becomes an important piece of cinema which gives to all the viewers an opportunity to look into the world we live in or should know about. 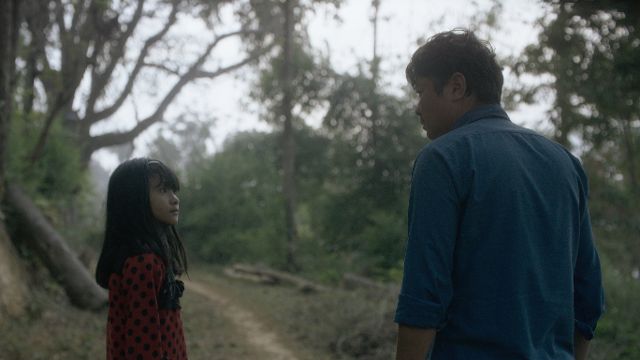 Set in the village of Nepaltra, “White Sun” opens with the death of Chitra (Prakash Ghimire), the former mayor of the village. The traditional mindsets of the elderly people of the village wouldn’t allow Durga (Chitra’s daughter-in-law) to even touch his body, which shouldn’t be taken out from the house via the main door whilst it is too heavy to be taken out of the window. Setting his entire film around this plot of taking a dead body to its cremation grounds on the banks of the river that flows beneath the highest roofed mountain top, the film moves through a series of character moments and dilemmas within themselves. Set against the backdrop of the war between the royalists and the Maoists that caused thousands of lives to perish until the war finally ended in 2006, “White Sun” mostly revolves around Chitra’s long absent son Chandra (Dayahang Rai), a Maoist who has fought all his life for a nation without gender politics and superior caste differences. Chandra, who has regretted every change the war has brought to him and the nation has to face the same old traditional hammer again.

Rauniyar and co-writer David Barker focus on the backlash between Chitra’s two sons. Suraj (Rabindra Singha Baniya) has been loyal to his father’s beliefs in a society that plays by the old set of traditions, supporting the rule of a single ruler (the king) with a blind eye. As both brothers descend through the mountain with the father’s body, they argue about who is right and who is wrong. Chandra is also angry and disturbed by his ex-wife’s decision of marrying his brother for the sake of her kid. The writing of the film transcends norms where Rauniyar and Barker present Durga (Asha Magrati) as a woman of substance. She perturbs to take matters into her hands when the men in the village (including the two men who she wants to sign as Pooja’s father so that she can get her a proper education) fail to conclude the things that had set things in motion in the first place.

“White Sun” also features a 10-year-old porter named Badri (Amrit Pariyar), who silently notices all the proceedings that occur around him. Rauniyar almost presents him as an outsider’s eye into a matter that needs a familial and traditional set of eyes. The absurdist humor in the film reminded me of Raam Reddy’s 2015 Kannada film ‘Thithi‘. A film about three generations of people reacting to the death of a major figure in the family. “White Sun” rides under the same bandwagon, although Rauniyar’s film is more convincing and serious. The way he skillfully judges the character and their reactions make for an interesting examination of the other side of war. War has mostly been associated with the unlawful work of tragedy that takes away lives, but this movie looks towards the bright side of war, where the contemporary world doesn’t just promote patriarchy but is a place for the decision-making women and children.