Japanese film-maker Kon Ichikawa’s international reputation as a humanist film-maker was cemented with his eloquent masterpiece The Burmese Harp (1956) – based on Michio Takeyama’s 1946 novel. Burmese Harp chronicles the story of a Japanese soldier who relinquishes repatriation only to stay in Burma as a Buddhist monk at the end of the Pacific War. The soldier initially steals the monk robes just to disguise himself. Soothing melodies flow from titular instrument as the soldier-turned-monk bury the innumerable corpses strewn around the Dante-esque landscape. Ichikawa’s 1959 film Fires on the Plain (‘Nobi’), adapted from Shohei Ooka’s novel (by Natto Wada), is also an unnerving anti-war film. However, on a closer look Fires on the Plain seems to be a more terrifying descent into purgatory, unlike the spiritual journey and pacifist tone that drives Burmese Harp.

Kon Ichikawa was one of Japan’s most prolific and versatile film-makers, whose films celebrated the power of the human spirit, infused with wry sensibility and free from fussy sentimentality. Mr. Ichikawa trained as a painter, but when he changed his ambition to be in film industry the art of painting provided him with an innate sense of framing that’s evident in his skilful play with the contrasts, empty spaces, and lines. Known as one of the foremost cinematic stylists of Japanese film industry, Ichikawa based most of his films on literary works. adapting the novels of Natsume Soseki, Yukio Mishima, Seishi Yokomizo, and Junichiro Tanizaki. 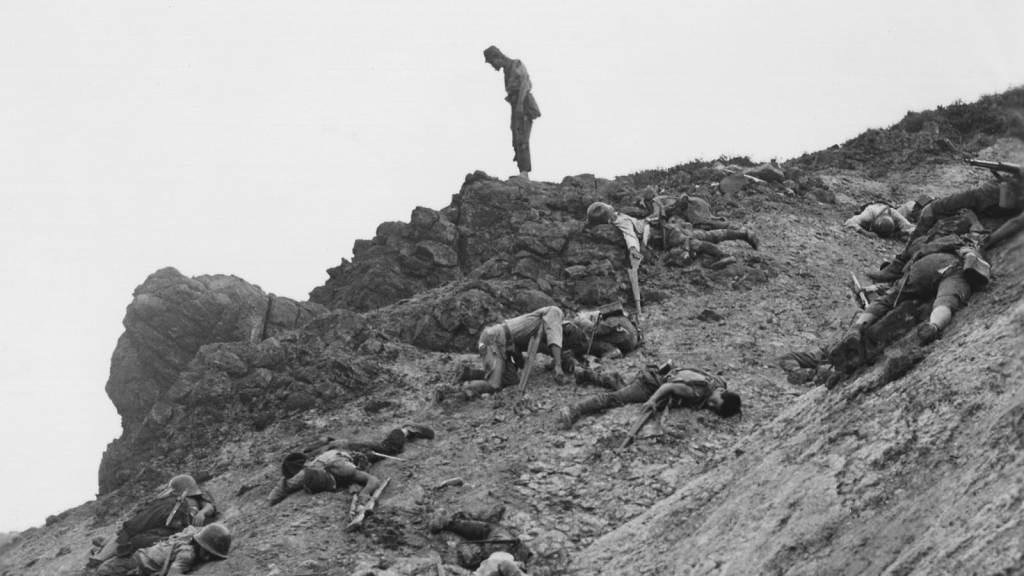 Fires on the Plain is a slap in the face for movies that portray wartime service as the most noble vocation or simply extracts adrenaline pumping action set-pieces from gruesome combat sequences. Moreover, the film opens literally with a slap in the face. Dazed and diseased Private Tamura (Eiji Funakoshi offering a madddeningly dedicated performance), his face in close-up, is the receiver of this violent slap. What follows is a lengthy reprimand from the old and weary squad leader, who orders Tamura to return to the field hospital to cure his TB or else simply use the hand-grenade on himself. The setting is Philippine front during the final phase of World War II. Food rations are dwindling and the besieged troops of the Emperor are at the height of despair. Taking his meagre food (yams), famished Tamura walks like the undead to reach the dilapidated field hospital, located amidst the dense jungle.

Related to Fires on the Plain – Come and See [1985]: A Chilling and Indelible Reminder of Nazi Carnage

Of course, the medical station refuses him as the doctor tells Tamura he has no place in the hut since he is able to walk. Later, in his hellish journey Tamura meets other disbanded imperial soldiers and horrified villagers who make the tubercular soldier to commit an atrocious act. He is also subjected to nightmarish visions: like gazing at corpses scattered at a valley, the day after American tanks attack; and comes across heap of skeletons next to a village church. Along the way, Tamura sees tower of smoke, which could be read as hint of hope. The reasons for smoke varies between signal of guerilla fights and farmers burning corn husks. The narrative’s pitiless descent into inferno also includes cannibalism as a gaunt, starved acquaintance of Tamura tempts him with ‘monkey meat’.

Fires on the Plain was adapted for the screen by Natto Wada, a long-time collaborator, and wife of Ichikawa. Wada sensibly avoided the novel’s Christian themes and never strives to turn the protagonist into a paragon of moral virtues. Tamura kills a defenseless Filipina woman in cold blood and would have almost chewed the ‘monkey meat’, if only his gums weren’t weak.  Tamura suffers in a wasteland that’s largely devoid of spirituality.  Wada doesn’t try to impart (religious) meaning in the soldiers’ suffering. As Tamura walks with his hands raised into Filippino fighters’ rifle fire in the end, salvation (or at least physical recovery) isn’t promised.

What keeps Fires on the Plain from becoming unrelentingly bleak is Ichikawa and Wada’s macabre sense of humor. The old, dying soldier who points to his arm (after having just swallowing mud) and tells to the dismayed Tamura, “You can eat this part!” elicits few chuckles. The most caustic brand of humor is witnessed in the scene when a soldier picks up shoes from a dead soldier to replace his own battered ones, and the discarded one is gathered by another soldier even worse off and whose left off boots will be probably used by another. Perhaps, Ichikawa reaches peak of macabre humor in sequences when a soldier lifts his face from a puddle of mud to respond to another soldier or in the moment a sick soldier thanks Tamura for his clemency with gratitude, “I won’t forget your kindness as long as I live”, which is promptly met with another starving soldier’s rebuke, “That won’t be long”.

Kon Ichikawa was easily one of the best film-makers to effectively transpose literary works to the cinema. This is particularly evident in Ichikawa’s choice to shoot in black-and-white to literally and metaphorically bring out the story’s darker dimensions; the lack of vivid colors enables the headlong plunge into darkest corners of human soul. In Fires on the Plain Ichikawa keeps on landing a visceral force to the narrative, using the nightmarish atmosphere to blur the lines of reality and hallucination. Nevertheless, I am intrigued to see how a cult film-maker like Shinya Tsukamoto (Tetsuo: The Iron Man, 1989) dealt with the same material in his 2014 adaptation of Ooka’s novel.

The shot of corpses scattered across scorching, marshy fields – the soldiers’ dead bodies looks like vegetation when seen from afar – could be likened to the apocalyptic vision of Bosch’s paintings. The depths of individual degradation as portrayed Shohei Ooka’s novel retain a more profound note with Ichikawa’s formal splendor. The methodical approach by actor Eiji Funakoshi (he starved for real to the point of collapsing on-set) to closely showcase the slow drift to pandemonium still remains nauseatingly powerful. The actors’ vacant, hollowed-out expressions would sear its way into our mind to forever represent the grisly image of war.

Movies So Successful That They Got Their Own Slot Machine