In Giuliana Bruno’s essay ‘Ramble City’, she identifies postmodernity within the cityscapes of tech-noir films. In fact, postmodernity as she states as having been identified within architecture may help us understand how temporal schizophrenia and pastiche occur.

In Blade Runner, the city is depicted as endless and cramped up. The whole city looks the same in the way that there is everything at once, in excess. There are no demarcations between spaces or people. It is claustrophobic, and in itself unidentifiable. One can’t claim to ask what would remain if we took its people and excess away? If there were a city underneath that? Because the answer is that it would cease to be the city if its overpopulation and excess were taken away. It is a shell of what it could have/or ought to be.

Los Angeles in 2019, as depicted by the film, is far from the LA of the past. It has no road signs, or any kind of sign that gives is a unique identity. The only signs are that of commercials, blaring from every surface. The people are unrecognizable, as individuals they dress up garishly because it is only their surface that they can exploit to create some sense of unique identity for themselves. Underneath that, most of them aren’t even human. It is not just humans and replicants who intermingle in this society, but other alien looking people.

Replicants are hard to distinguish from humans, and that remains the point of the narrative, but otherwise, like any postmodern city, LA 2019 contains multitudes of peoples/humanoids of different types of skin, colours, and genders. And even those demarcations aren’t obvious to make as individuals strive to be different than individuals despite being familiar to each other in some way at the heart of it.

This is what happens in cities in the post-modern world – people from different cultures and communities come to one place, and simultaneously hide their origins to fit in to a new society, but will not hesitate to commodify or put out their identity for some kind of validation or commercial gain. LA 2019 is schizophrenic in that you could never tell what year it was if the titles of the movie never mentioned ‘2019’ to you, we might have recognized that it’s some idea of LA in the future, but even then its elements are present in today’s reality. 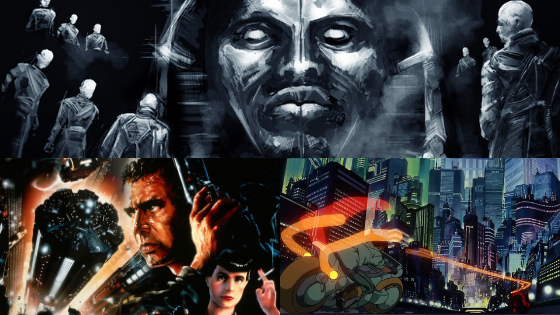 It contains a multitude of time periods, we can see this simply in terms of fashion – why are women in 2019 wearing shoulder pads that were worn in the 40s? Why are they wearing pink razor cut hairstyles and glitter identifiable with the 80s? It is about how the future is to just be a limitless revival of all our pasts combined. This city is a spatial pastiche in the sense that its architecture combines elements that are a mishmash of old and new things, and moreover, things that aren’t meant to be put together. They don’t co-exist, the people or the images, they simply clash and provoke.

So LA 2019 contains not just Asian origin people selling noodles in what is supposed to be America, or Latina women walking down glass shops with white looking mannequins, or Black men with bionic arms going about their days, but absolutely alien people walking around. Milner’s essay reminds us that Blade Runner is noir because it contains the styles and characters of noir cinema, and the point of discovering the human in humanity is not among immoral humans, but in those that are not human at all. Deckard sees so many ‘differences’ and ‘contradictions’ walking around the city but his task is to determine if someone is inherently real or not.

Similar to Postmodernity in Films – Meta-Humor: A gift or a curse?

The city in Dark City works similarly. It may not look provocative the way Blade Runner is, but it functions the same way. The city in Dark City, as we discover along with the protagonist is that which has no memory. It exists circularly, and everything resets and begins again while everyone is asleep. There is no day, there are no indicators or signs of this constant change, and people’s lives are not theirs to live but someone else’s to experiment with.

Residents of the city do not see this process, they do not even live it, it happens overnight. Lives change overnight and there is no memory of it to contain a gravitas of it. Memories that people have, say of Shell Beach are implanted and can’t even be trusted. The protagonist in the film realizes that he is like Barthes in Bruno’s quotation of Barthes from Camera Lucida, that his memory of something is only as real as he remembers it. But this traumatic realisation brings a form of reality into his mind, that if for example Shell Beach never existed and that the memories do not exist, then there must be some mechanism under this surface-city that guides the rules. This is not lawlessness but in fact a desire for logic and rational to all of it. Essentially the traumatic realisation of life in a postmodern city is the need to scratch the surface and still find something to hold on to, something unique.

Akira may be more tech than, but the Neo-Tokyo 2020 city in the film fits the postmodern aesthetic. Akira may be noir in that it contains themes of crime and corruption, not just the literal kind but also that of human desire for immoral things as such, but also features character tropes like a detective, runaways, and institutions like the police are replaced with the military, power is replaced by science and scientists, and immorality may not be some desire to deal with the lack (like a castration complex) but with lack as in lacking in terms of being human and wanting to be God.

The plot of Akira follows two orphan boys caught up in a post-apocalyptic Tokyo, one of them kidnapped by the government/military for insidious human experiments that may help make super powerful men. Neo-Tokyo is a combination of 1980s Tokyo with futuristic elements, like superfast cars and computers, but the culture and fashion of the people remained within the 80s. So while the lead character Kaneda’s new bike is some futuristic model of a motorbike, he still goes down to a derelict bar to listen to listen to music off a jukebox. Neo-Tokyo in 2020 seems like it was desperate to cover up the nuclear attack it faced by rebuilding its city back to a time when it was at peace, but also uses modern technology to maintain an old façade.