We are living in a new age of tv, where Netflix dominates the world. It has defined a generation of tv lovers, and redefined and shortened the experience of loving a show, going from waiting every week to catch up on your favorites (or relying on locally-syndicated reruns) to planning ahead to call in sick to binge the latest season of Stranger Things the day that it drops. And when you have that kind of power and love behind you, why not take a chance on something new, interesting, downright crazy, just for the fun of it? That is exactly what Netflix did with Frankenstein’s Monster’s Monster, Frankenstein, a perfectly short 32-minute ball of madness.

David Harbour, riding high on the success of Stranger Things season 3, plays a fictionalized version of himself. He finds a tape of a teleplay, the titular Frankenstein’s Monster’s Monster, Frankenstein, made by his late father, David Harbour Jr. (also played by Harbour). He gathers his father’s old agent (Michael Lerner) and one of his producers (Mary Woronov) in an office that replicates the late actor’s office, complete with his special chili to drum up memories of his father in them, trying to get to the bottom of who his father was, and if he was a shady man.

The talks are cut in between scenes from the teleplay, which is broadly about a scheme hatcheted by Dr. Frankenstein (Harbour) and his assistant Sal (Alex Ozerov, as Harbour’s young acting enemy Joey Vallejo) to trick a woman who works for a board of investors (Monica Fulton, played by Kate Berlant) to send them more money, by having Sal play Dr. Frankenstein and the doctor play the monster. Among the scenes from the play there are also snippets of an interview with the old actor, a beef Wellington commercial he did, and a beginning actor’s help videotape. 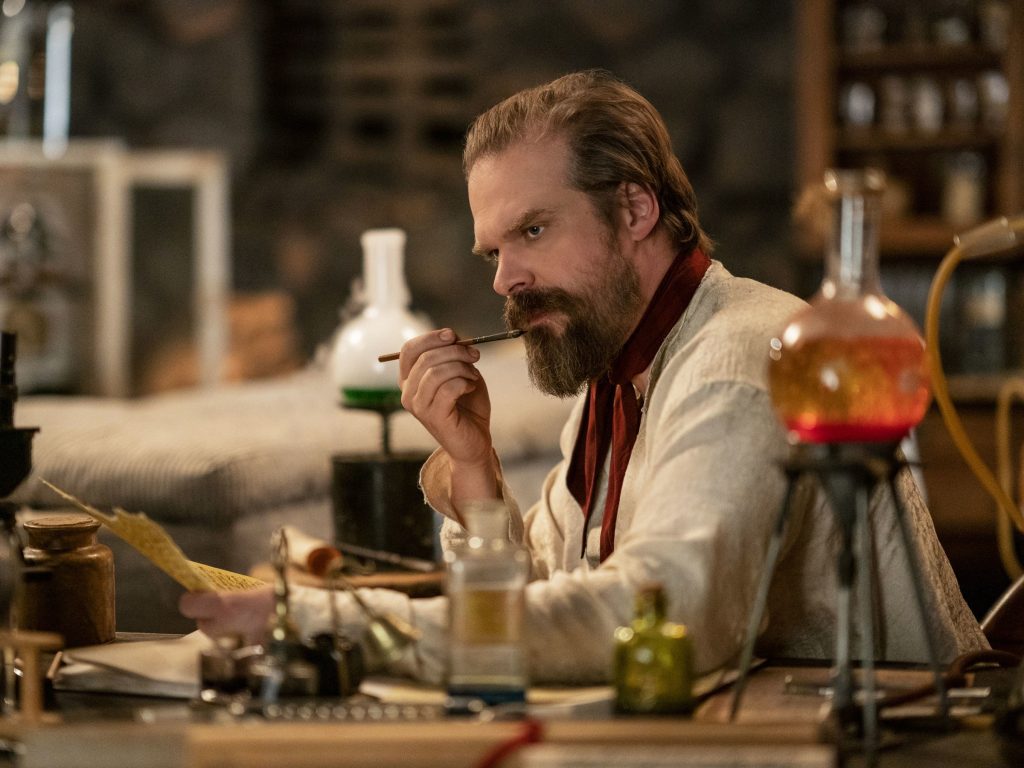 The premise of Harbour III’s journey makes no real sense: he found this tape in his father’s attic while “battling rats”, and upon watching it must get down to the truth of who his father was. His father’s business friends don’t take this journey down memory lane as seriously as Harbour III, and although he asks very serious-sounding questions of the audience (“Why this play?”), nothing that unfolds makes any sense.

The play is a hopeless mess, with Harbour Jr. and Vallejo breaking character in every scene together to dig at each other in petty ego clashes. The spite between the actors leads to a tease of “did Harbour kill Joey Vallejo?”, which is quashed as a car accident that Vallejo had, and a simple petty hatred from Harbour Jr. Monica Fulton is very professional, not breaking character as a woman both men in the play desire, and tries to keep the play on balance by doing her part. Alfred Molina plays Aubrey Fields, the greatest actor of the world in Harbour Jr.’s time, and appears in the play for no other reason than simply because Harbour Jr. Wants him there. Fields also hosted The Actor’s Trunk, the beginning actor’s videotape which teaches actors to improvise auditions with random props in a trunk. The tape showcases Harbour Jr.’s self-importance, with his odd ideas and his catchphrase “and that’s how I got into Juilliard!”

Recommended on Netflix: How to Sell Drugs Online (Fast)

If this doesn’t make any sense that’s on purpose, because there is none to be found in Frankenstein’s Monster’s Monster, Frankenstein. It is a completely bizarre all the way through on purpose, and subverts everything it sets up, and things that do happen are completely random. There is no point to Harbour III’s journey into his late father’s mind, and no real answers come out of it. The murder tease of Joey Vallejo is knocked down as a rival’s coincidental death, although the point is still strong that the actor was a self-important, philandering, lying, narcissistic prick. Harbour Jr.’s catchphrase was a lie, as he had never gone to Juilliard. There is a running gag of Chekhov’s gun, both in the play and the mid-scene advertisements, and the metaphorical gun seems to be firing all over the show by an insane trigger-happy madman.

The one point of the show is not in the narrative, more in the theme. Frankenstein’s Monster’s Monster, Frankenstein uses several theater tropes and the character of Harbour Jr. To take comedic potshots at drama school and theater’s lofty pretensions. There is nothing behind the play or even the actor. The actor thinks of himself as extremely talented maestro but is no such thing, and there is not even any depth to him. He lied about his schooling to make himself sound better, and started petty fights with the younger actor Vallejo because of his own deep-seated insecurity. In the end all there was to Harbour Jr. was self-love, self-loathing, and deep misery.

The film ends with no answers that resolve anything, just a deep feeling within the audience of what the hell did I just watch? But it never feels like a chore to watch. Although I still wish it would’ve made some sense, I did enjoy the crazy roller coaster ride throughout this thoroughly ridiculous movie. I am so happy that something this ridiculous can even exist, either to really challenge what can be done with absurdist comedy or simply just to be there, as an oddball to stumble upon.