American Vandal works largely because it is a solid and sincere version of the things it is mocking. From capturing self-contained serious-mindedness of the teenage characters to ably interlacing the diverse threads in content and form, the Netflix series simultaneously tells the story as well as satirizes it in unexpected ways.

Geeky senior student Alex Trimboli, compassionate Spanish teacher Ms. Shapiro, and the members of school board are absolutely shocked by what they had to witness on March 15th, 2016 at the premises of Hanover High School (situated in Oceanside, California). The faculty and student body are pretty sure who might have committed this appalling crime: unbelievably doltish teenager Dylan Maxwell. Dylan is immediately expelled after the school investigation and his chances of getting into college seem grim. Dylan maintains that he is innocent of the crimes, which make his truth-seeking school-mate and aspiring film-maker Peter Maldonado to do some sleuthing in order to get at the discomfiting truth. Peter our narrator muses, “Consider for a moment the type of person who would……… (commit this specific crime) What do they look like? Who do they hang out with? Where do they sit in the cafeteria? What kind of grades do they get?” Did Dylan really commit the crime or was he judged and punished based upon the crappy things he did in the past? Any way, what was Dylan accused of doing or what exactly unnerved the school board: spray-painting blood-red penises on the 27 cars of faculty members at the school parking lot. Will the border-line obsessed documentarian find out the answer to $100,000 (estimated damage to the vehicles) worth question: Who did the dicks? 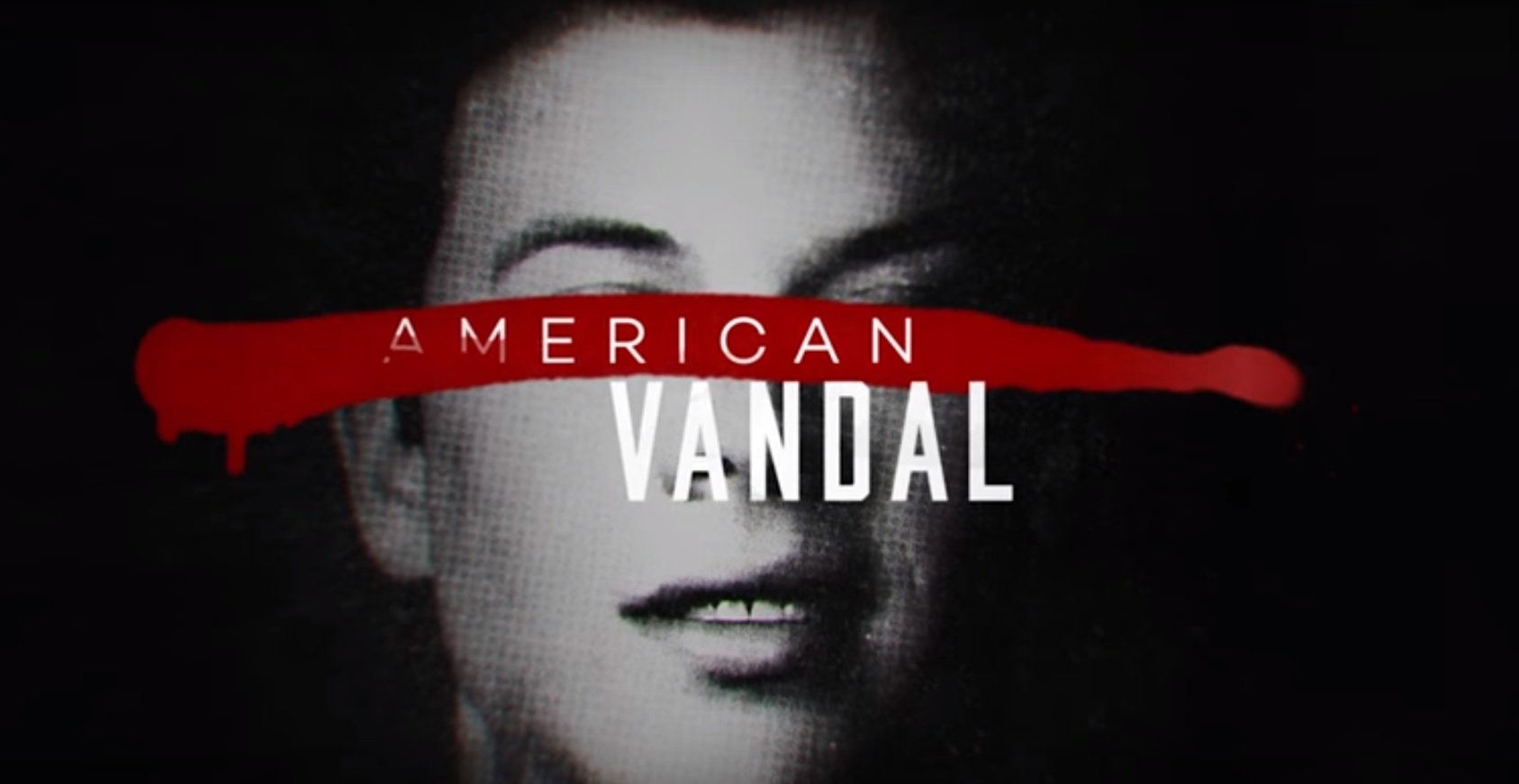 Netflix’s four-hour (eight 30-35 minute episode) mockumentary American Vandal (2017-) smartly and hilariously borrows its visual and narrative cues from popular, endlessly debated true-crime docu series of the last few years. From using the cinematic cliff-hanger episode ending, manipulative musical cues of ‘The Jinx’ to incorporating the inevitably subjective perspective of podcast ‘Serial’ to repeatedly referencing to ‘Making a Murderer’s’ Steven Avery, creators Dan Perrault and Tony Yacenda’s true-crime spoof never limits itself to being a dumb dick-joke. Plenty of laughs are gained from witnessing the idiocy of the high-school goers, but it also satirizes far profound notions, especially about the popular, unmitigated craze for true-crime docu shows. Of course, it has quite a lot of raunchy and juvenile humor, but at the same time American Vandal surprisingly scrutinizes the unbridled power the camera possesses to manipulate its maker, subject, and the viewer (since it’s a spoof, half the laughs are understood if you have binged the aforementioned popular true-crime shows).

The opening title sequence of American Vandal features fade-in and fade-out shots of the suspect Dylan, a menacing string music, monochromatic pictures of the crime scene, and credits the teenage film-makers Peter Maldonado (Tyler Alvarez) and his best friend Sam Ecklund (Griffin Gluck) as directors. So it clearly signals that it’s a amusing investigation of the investigators. Creators Yacenda and Perrault’s genius lies in the fine-tuned imitation of the now-popular truth-seeking docu series: slow panning shots of the school campus; zoom-ins of the suspect’s face; close-up shot of a rolling cassette accompanying a interviewee’s perceptive; joyfully nutty way of graphically re-enacting particular situations; zooming-in to old footage for theorizing suspect’s sinister intention; contrasting montage tropes and so on. Peter has the gut feeling that Dylan (Jimmy Tatro) wouldn’t have spray-painted dicks, despite the guy’s jackass nature. Dylan Maxwell and his Wayback Boys (other dopey pals) are infamously known for their stupid pranks, posted on Youtube channels, titled ‘nun tree humping’, ‘baby farting’. Dylan has earned the hate of many teachers, especially no-nonsense Ms. Shapiro (Karly Rothenberg), by drawing penis outlines on the class board. Considering Dylan’s not-so-bright nature and since a witness has come forth to implicate him (the geeky Alex Trimboli), he is expelled without a second thought (his alibi is also very weak). Despite Peter’s doubt, his best pal Sam is sure about Dylan’s culpability, until he stumbles upon the first hole in the school’s investigation: ‘ball hairs’. In Dylan’s history of dick-drawing, there hasn’t been a single hairless nutsack. Apart from the hairs, the tip and ball size also varies from Dylan’s drawings. And that erects a strong case for the guy’s innocence as Pete and Sam penetrates deep into this incredible discrepancy.

The first episode ends with questioning the character nature of school’s key witness: Alex Trimboli. Despite getting good grades, Alex is known to have lied about things to be popular amongst his peers. The most damning thing Alex has recently said about his level of acquaintance with class’ stunning beauty Sara Pearson makes Peter and Sam wonder. Hence, the 1st episode ends with a cliff-hanger question directed at Alex: ‘Did you get a hand-job from Sara Pearson?’ The series is riddled with such cleverly paced, if not absurdly funny, twists (even a trivial text msg of ‘Heyy!’ has an extra-layer of meaning). It boasts the questionable witness, pigeon-holed suspect, relentless investigator, suspicious authorial figure, and other far-more sinistral suspects. Thankfully, these stock character types perfectly work because they are authentically realized, in spite of the jokey scenario. The show runners brilliantly use the short 30-minute sketch to lampoon every true-crime trope, emphasizing the gravity of each unveiled clue with a laugh-inducing flourish (most memorable & hilarious moment is the graphic recreation of scenario at summer night camp to evaluate Alex’s hand-job story). And gradually as the infantile jokes wan to be replaced by the complicated yet subtly funny exploration of the crime’s complex tangents, we are enticed by rhythmic narrative trajectory. It’s like we are lured to assume or theorize the identity & motive of dick-drawing perpetrator, while at the same time we revel at the jibes made at this new, immensely favored form of documentary film-making. 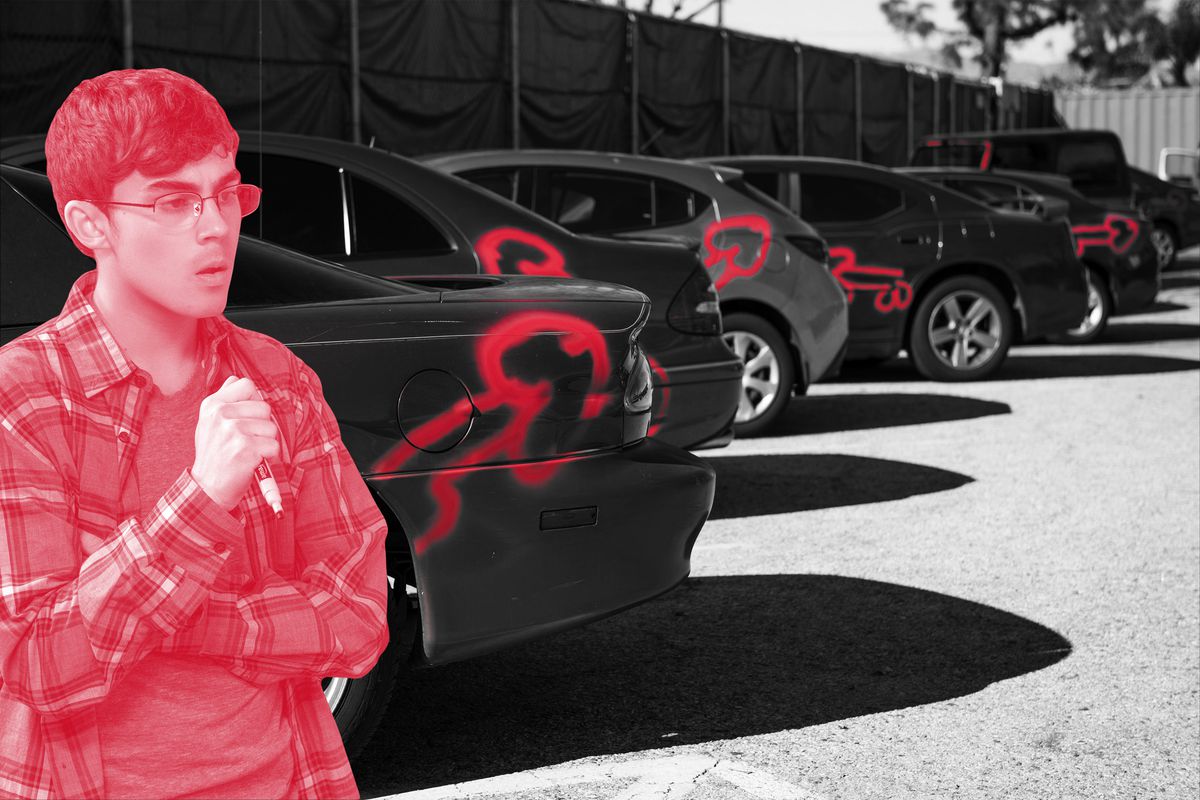 American Vandal works largely because it is a solid and sincere version of the things it is mocking. From capturing self-contained serious-mindedness of the teenage characters to ably interlacing the diverse threads in content and form, the series simultaneously tells the story as well as satirizes it in unexpected ways. Despite the absurdity of the plot premise, there’s enough room left to root for the characters and glean their emotional response.  The moments of clarity for Dylan towards the end provide a thought-provoking note which thoroughly breaks the initial expectations of the show being a one-note dick-joke. If most of the characters seem to confirm to the American high-school stereotypes, it’s because the show-creators are mocking the (student) film-makers reliance on pure assumption, regardless of their promise to stay glued to the facts. Perhaps, confining the spoof scenario to high school brings up pastiche of amusing observations (and kernels of truth). Beyond the silliness of high-schoolers’ fixation with snap-chat, Instagram, Facebook, twitch, etc, it showcases the general navel-gazing attitude and what it means to be in high-school today. Two minor characters in the school particularly stand out: relentless campaigner Christa Carlyle (who reminds us of Reese Witherspoon’s character in Alexander Payne’s “Election”) and the inappropriately funny history teacher Mr. Kraz (the man-child type reminds us of Rob Reiner’s seminal rockumentary ‘This Is Spinal Tap’).

The most interesting aspect of the series is how the documentarians – Peter and Sam — loom larger than the subject or the truth they are seeking, as the investigation drags on and on. Their jubilance and naivete at talking about the viral sharing, online petitions and local news coverage makes us wonder, ‘what’s all these narcissistic digressions got to do with their alleged noble pursuit’. In the mid-episodes, the student film-makers’ pursuit of mysterious tangents eventually don’t make much sense and remains little frustrating (Sam’s love for Gabi, the analysis of party footage, etc). But in the finale, those nonsensical features are amazingly turned into something inquisitory. It ironically showcases how Peter and Sam’s mission to attain clarity and transparency are utterly failed by their own assumptions, bias which consequently hazes over  or muddles the nature of the crime more than ever. As one girl affected by Peter’s insinuations censures at him, “You had to make the best movie, huh?” It all makes an effective commentary on our obsession with whodunits and how the documentarians become subjective characters in the story they’re telling (observations become assumptions; and assumptions has the danger of becoming impregnable facts). Yes, it’s asks the same age-old question of ‘Is there any such thing as ‘objective truth?’’, but in a fine way that makes us perpetually laugh and think.

Netflix’s American Vandal (2017–) starts off as a bawdy, ridiculous high school prank and ends up with truly engrossing meta-textual layers, deftly satirizing the growing true-crime craze. The preposterous high-schooler in me with a penchant for double entendre may say: the series digs deep and stays hard.