Home»Reviews»Snakehead (2021): A Bildungsroman, Fresh in Spirit but Old in Storytelling
Reviews/VOD

We enter into the film and the United States of America with our protagonist, Sister Tse, an immigrant from China, following a commotion under dim lights and after being ungraciously welcomed by a Snakehead, a Chinese human trafficker, with the words – “You shut the fuck up. Welcome to America.” We settle down in Chinatown, New York with her, and watch her closely as she walks down the alley of several professions and morality. Director Evan Jackson Leong, most famous for his documentary film Linsanity about Jeremy Lin, in the latest film, Snakehead (2021), unfurls the journey of Sister Tse, while trying to carefully tick the obvious crime-thriller tropes in a typical storyline with a fresh improvement upon the genre.

Crime-thrillers have had a tendency to focus upon the moral dilemma faced by protagonists, opening up a space for the audience to mull over their redemption or punishment. However, Sister Tse faces no such dilemma or none that we are made aware of in the course of the film; even the motif of betrayal remains underplayed. Her unwavering moral compass makes her refuse to partake in a smuggling affair but she voluntarily chooses to engage in a life-threatening task, both being equally unethical. She has her heart in place; she is in the States for a reason, her family.

Interestingly, by the end of the film we don’t know if the family she came to the States for is still her end goal; or, is it money? Perhaps the hollowness of the unchanging Chinatown finally catches up with her.

For Sister Tse, the American Dream was never a part of her belief system. Freedom, equality, and better standards of living have already gone for a toss by the time she finds herself confined to Dai Mah, the most revered leader of the snakeheads in Chinatown, played by Jade Wu, famous as Genghis Connie Lin from Marvel’s Luke Cage (2016-2018), for her impending dues – almost sixty thousand grand.

The space she is allotted to live in is stifling, the ambiance is grim, and the people around look like they could all do with a day at the park, in the sunshine. In fact, the sun never shines in this part of New York – it is either dull, gray, and raining or the streets are steeped in the shadows of nightlife. Tse slaves from one job to another while navigating this cheerless neighborhood. Acting with poise, Shuya Chang, a famous actor, and producer, is almost good in her role. 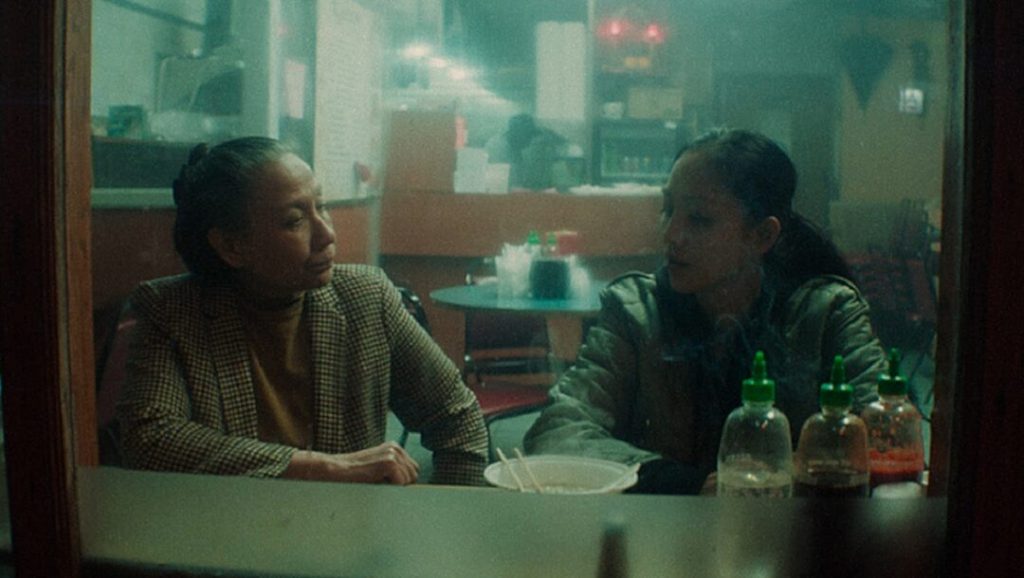 For a film that portrays the empire and family of an influential snakehead leader, the decision to give it a matriarchal ruler is a risky choice, but it is a risk well taken. Crime thrillers, especially films with plots around gangster empires and families, usually make its women appear like fancily dressed puppets, ill-fit in an otherwise man’s world. Snakehead decides to lead the way and gives us a female protagonist and a female antagonist, with male characters not overshadowing the plot. However, it is not a feminist beacon – aspect of motherhood, protection, powerplay to prove superior in the eyes of the men around them are some of the primary motivations governing our female leads – but it is a good step in the direction towards female representation in the genre.

Despite its deceptively simple main plot, the story refuses to thrill us. Even in the middle of the most action-driven, palpitating scenes, the audience doesn’t feel the need to sit at the edge of their seats. The real lapse in the film is the sudden slow-motion sequences that majorly take away from whatever little tingle-under-the-skin it manages to generate. The action and the rain sequences, mostly shot in slow-mo, almost forced the words ‘of course’ out of my mouth.

Also Read: 10 Great Asian Films You Can Watch on Netflix

Adding to it, the screenplay gets lazy from time to time, sprinkling the favorite American-English slang to make up for the missed opportunities to keep the audience engaged with dramatic, but impactful, dialogues. The background music fades into the ambiance, sometimes to its advantage and sometimes to shock the audience out of their reverie. It is the acting that saves whatever little light the film gathers during its one hour and twenty-nine minutes runtime.

A bildungsroman is a story that traces the moral and psychological journey of a protagonist from their formative years to maturity. In this story, the protagonist makes a literal and metaphorical journey. In one of my most favorite sets of scenes from the film, she strikes out the sum that she owes to Dai Mah with a pencil, the amount decreasing slowly at first and then rapidly – the pathway to the economic journey towards attaining freedom. Snakehead is not an uncommon story with every chance of derailing from its main agenda, yet it delivers what it set out to preach – “We all know we could die but we all have our reasons”. It is a story of survival, and it deserves to be watched for its lesson in resilience.

Snakehead is set for a limited theatre release on 29th October 2021.

Which Alice in Wonderland Movie Is Best?