It is a truth universally acknowledged that Game of Thrones’ writing has been steadily deteriorating since its departure from the books. Game of Thrones Season 8 has been hit worse. Numerous memes and tweets have been doing the rounds crying hoarse about its latest episode. While I am of the humble opinion that this was perhaps one of the most poorly written and executed episodes, there were a few saving graces. It opens with everyone taking stock of their favourite people who died in the battle with the undead in the previous episode, and quickly shifts to a scene of feast and merrymaking, celebrating their victory and momentarily overlooking the fact that the purpose of their shaky coalition is over. Since so many storylines overlapped and a lot went down in the episode, it is best to break it down to see what did and didn’t work. 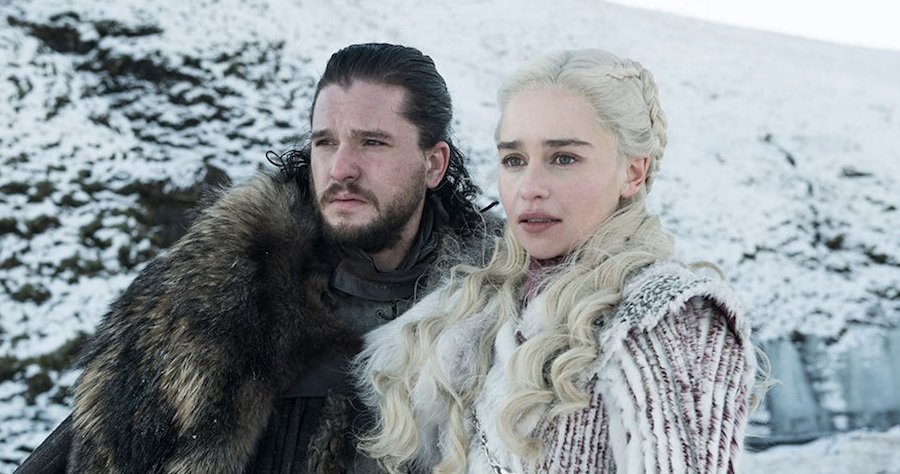 Jon Snow is a man of honour, but his expeditions beyond the wall have shown us that he fights for the greater good even if it means breaking rules and flouting oaths. As a member of the Night’s Watch, he went against the rules and slept with Ygritte, fell in love with her, and when the time came, betrayed her to unite with his brothers to fight against the Free Folk. He is brave but foolhardy. It is therefore frustrating to see him willingly ‘bend the knee’ to the Mother of Dragons even though he is the rightful heir. Dany is becoming increasingly reckless and impatient to claim the throne, to the extent that the showrunners now have her begging Jon to not reveal the secret. Using everything from manipulative tears to menacing glares, she subdues Jon into not being truthful. While one cannot blame Dany for wanting what she has struggled for all her life, it is hair-clenching maddening to see Jon not just obey her, but also rebuff Sansa, the smartest person in Westeros who won the Battle of Bastards and hence Winterfell.

I repeat, the smartest person in Westeros did some clever thinking and despite being sworn into secrecy by Jon, planted the seed in the mind of the former cleverest person, Tyrion. While some have criticised her and Arya for being xenophobic with their repeated remark, ‘She’s not one of us’, I believe Sansa merely wants to get what belonged to her family before the first Targaryens arrived in Westeros. She does not want the Iron Throne, although she is the fittest person to rule. Hers is the only satisfactory character arc so far.

‘That’s not me’ is how Arya turns down Gendry, the newly declared Lord of Storm’s End. It is an echo of her conversation with her father Ned Stark when she tells him that she does not envision a future as a Lady with family. She has a kill list from which big names have yet to be struck out. Her gratitude and farewell to Gendry are as heartfelt as her desire to lose her virginity before staring death in the face. She did not ‘use’ Gendry to dispose him off later; it was a very critical case of YOLO. It is endearing to see her reunited with Sandor Clegane, and her journey to the South to shut Cersei’s green eyes forever reinforces her larger purpose.

The poor dire-wolf got ghosted (please excuse the pun). But on a serious note, he did not deserve the treatment he actually received from Jon Snow. Not only has Ghost been a loyal companion to Jon, but he was also spotted by Theon Greyjoy in S01E01 as ‘the runt of the litter’, showing that even though Jon Snow was a bastard child, and an afterthought in many cases, he was still a Stark. Now with the knowledge of his new, true identity, it seems as though Jon is willing to let the association with House Stark go, a fact emphasised when he ruefully tells the Stark siblings in the Godswood that he has ‘never been a Stark’. High on the heights, he touched on Rheagal’s back (RIP), does Jon consider himself to fly for a pet dog? The least he could have done was pet him and say goodbye.

All logic went out of the window when even with two dragons flying high in the sky, Dany could not spot Euron Greyjoy’s fleet. Rhaegal’s senseless death, however, serves to create a level playing field by removing traces of all that is magical and fantastical. Ergo, Melisandre is gone and so are the White Walkers. Only with the exit of the dragons can there be a battle amongst equals.

As uncouth as Tormund may come across, his admiration for Brienne is heartening and genuine. It was, thus, a little heart-breaking to see his hopes get dashed while Brienne got to experience what Arya did in the second episode. Ser Brienne, the only female knight, who vouched for Jaime as the man who armed and armoured her, divests herself of her guard and reveals a vulnerability that finally presents her as a three-dimensional character. She has, throughout the series, shown a steady belief in a singular cause – that of loyalty and integrity – and has resisted every sentimentality. She is at her most human self when she succumbs to her weakness for Jaime, for it is only human to have an Achilles heel. I mentioned in my previous review of the second episode that Jaime’s arc has come full circle in giving in to his attraction for Brienne. Well, that was a hasty judgement because if Brienne can stand in the cold in a nightgown begging for Jaime not to leave her, Jaime’s weakness, his sorest point, will always be Cersei. She is a drug for him, and even if the Valonqar prophecy holds true – even if he has to go back to commit another act of regicide – Jaime’s arc will come full circle only when he is close to Cersei.

One weak dragon, some forty men, the Dragon Queen and her entourage queue up outside King’s Landing trying to hold the bull by its horn. They are within easy firing range, but Cersei’s decision to merely behead Missandei was such a cop out on the part of Benioff and Weiss. The death of the only black woman goes on to show that people of colour are dispensable to the narrative. I suspect Grey Worm, the only remaining black character, will bite the dust in the next episode in an attempt to avenge Missandei’s futile death.

Only the last two episodes of Game of Thrones Season 8 and the series is pending, only a magic trick could help redeem the finale that is steadily sinking.

You can watch Game of Thrones Season 8 on Hotstar.

Recommended Reading – Theon, A Greyjoy and A Stark.

[Watch] Final Trailer for IT Chapter Two - The Dancing Clown Missed You, Craved You