The storyline of Stephen Frears’ The Hit (1984) seems so simple that it could be hard to understand the acclaim it has garnered over the years (although a commercial failure) or the reason behind a Criterion release. A low-level gangster rats out on his bosses involved in heists in exchange for a new life in the arid desert town of Spain. One fine day, ten years later, he is kidnapped by local thugs and turned over to two men – a notorious hitman and his young & impulsive assistant.

What starts off as a familiar tale of gangland drama slowly morphs into a meditative travelogue, punctuated with a compendium of existential themes that seem to belong to western European art-house cinema. Of course, there’s a bit of a cat and mouse game between the beatific turncoat and the cool-headed hit-man. But The Hit is mostly a wonderful character study of two enigmatic men and an intriguing meditation on death, which is perfectly adorned with interesting textual ambiguity of sorts.

The film opens with Willie Parker, a small-time British gangster, under the protection of lawmen round the clock, who is about to testify against his higher-level criminal accomplices in court. Terrence Stamp superbly plays Willie Parker imparting upon him an uncharacteristic sense of grace and humor. Willie calmly reads books when he is holed up in a broken-down apartment alongside the tense, gun-toting police officers. 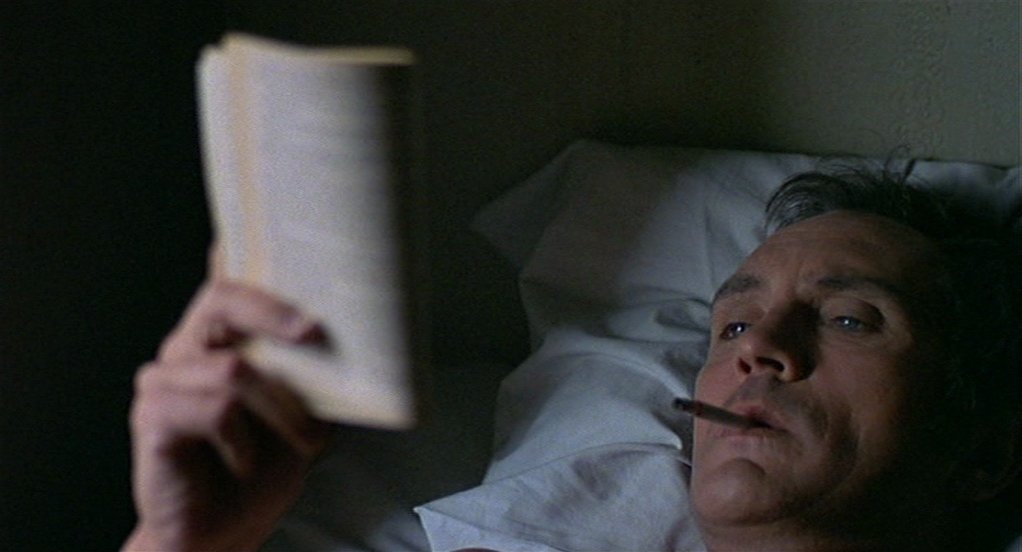 At the courthouse, he doesn’t falter a bit when pointing fingers at his visibly enraged former partners-in-crime. Willie’s composure slightly shows cracks when the condemned criminals stand and sing a song (“We’ll meet again some sunny day”), declaring their vow to take revenge. Ten years later, Willie is seen riding a bicycle, gaily strolling through a Spanish market square on a sunny day.

A group of hooligans reaches his mansion that’s bedecked with stacks of books and a picture of John Lennon. They wait for Willie Parker’s arrival. Willie playfully abandons his guard and reaches home alone. Despite putting up a bit of resistance, he is parceled out and taken to the men sent by the mob bosses. One is named Braddock (John Hurt), a brooding reticent type who always keeps his cool. The other man is blonde-haired Myron (Tim Roth), much younger, inexperienced, and anxious than Braddock. The men plan to take Willie and kill him there. But that presents a whole lot of problems with a dogged Spanish detective (a cameo from renowned Spanish actor Fernando Rey) following their trail.

A detour to Madrid unexpectedly adds another member to the trip: Maggie (Laura del Sol), a young girl-friend of Braddock’s old friend. The road trip smartly plays with our expectations. Maggie isn’t a silent victim. She has a few tricks up her sleeve. But what’s most fascinating is Willie’s peaceful acceptance (or total lack of concern) of his imminent death (“It’s just a moment. We’re here. Then we’re not here. We’re somewhere else…maybe. And it’s as natural as breathing. Why should we be scared?”). It even causes unease within the uber-cool Braddock. Gradually, the intense face-off between the hit-men and their hit eschews the trappings of conventional thriller and unfolds in a Zen-like fashion.

The Hit marks Stephen Frears (‘Dangerous Liaisons’, ‘The Queen’) return to feature film-making after making his directorial debut in 1971 with Gumshoe. Mr. Frears spent more than thirteen years working in television, but he doesn’t stumble a bit in establishing the broader visual and thematic scope of the narrative. Directing the near-perfect script from Peter Prince, Frears carefully constructs the dynamics between a quartet of strange characters, bundled together for a cross-country road trip. As the narrative progresses, the atmosphere moves from arid town to busy city to lush forest and alongside this change in scenery, the director subtly hints at the changing interpersonal dynamics.

Myron’s respect for Willie, his soft-spot for Maggie or Maggie’s undisclosed tougher persona, or Braddock’s increasing sense of anxiety and insecurity – all such little changes in circumstances and within characters keeps up the tension while also subverting our initial expectations of the characters. Be it the mesmerizing shot of Willie gazing at a waterfall or him later explaining his philosophy on death to Braddock, Frears’ sense of staging turns such concise examination of contradictory personalities more memorable. 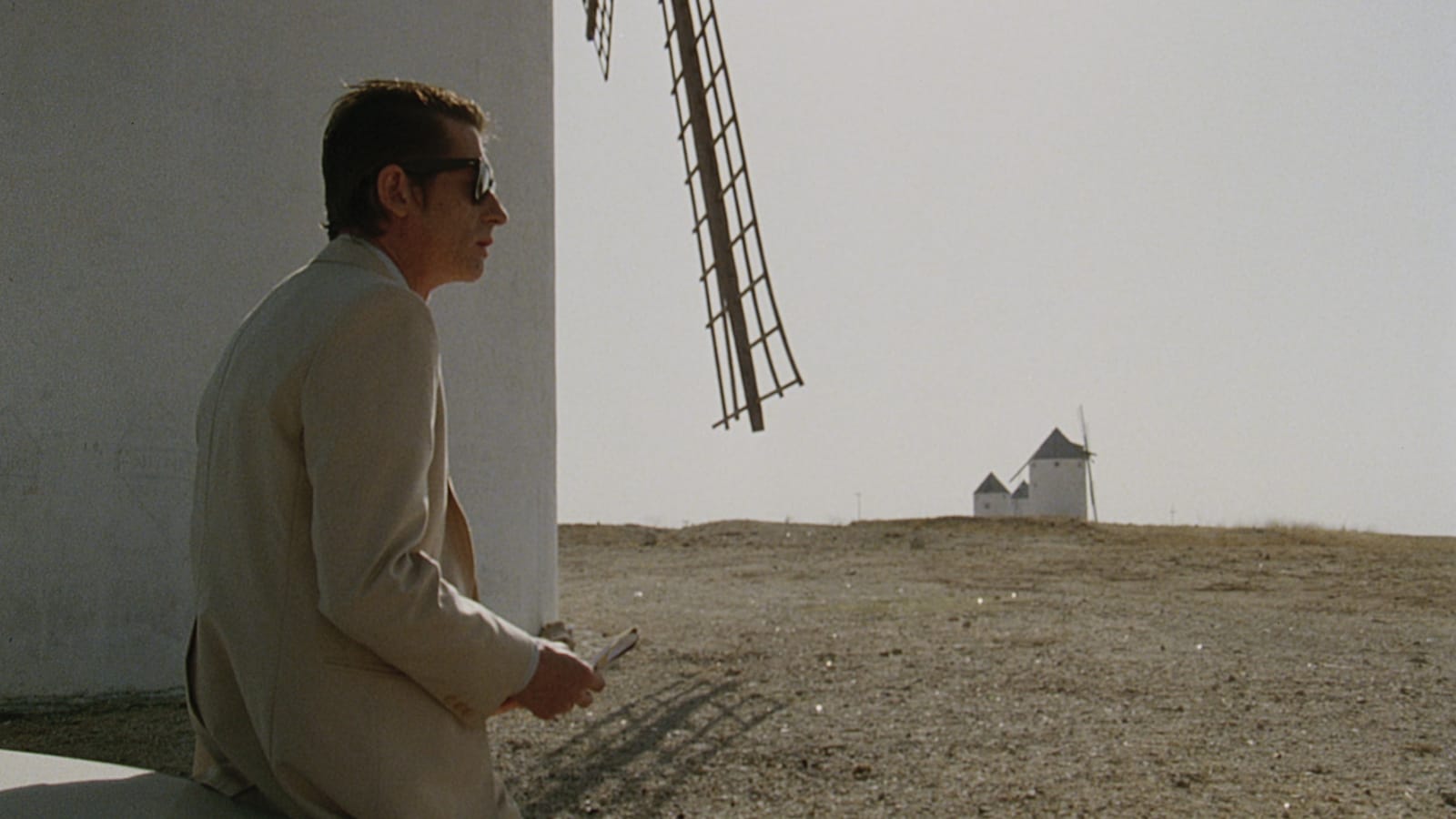 Peter Prince’s script masterfully plays off these four characters with each other. He doesn’t lose sight of the psychological elements in play when putting these characters under relentlessly fresh scenarios. Particularly, the ending is very well-written. We expect an explosive climax; for the emergence of a clear demarcation point between heroes and villains of the tale. Prince does cook up something explosive, but one which makes a strong statement on the themes of death and duality within an individual. The eventual defeat of male aggression and the endurance of femininity offer an immensely gratifying conclusion to this study of contrasts. And it’s a great delight to see the evenly matched performers – Stamp and Hurt –confront each other while also attempting to engage with each others’ contradictory interior emotions.

Overall, The Hit (98 minutes) is a captivating fusion of generic crime story with the thematic and stylistic notions of art-house cinema.

Yeh Kaali Kaali Ankhein (Season 1) Netflix Review: Succeeds in emulating a trashy pulp fiction but it's too repetitive to be good