Everyone is special, even if they aren’t special before the ones who are special. Conclusions must not be drawn before time, for a half-truth can be taken in a bad way and prevent the real enchantment from bursting forth. The teachings Encanto can present its audience with are immense and charming.

Directors Jared Bush, Byron Howard, and Charisse Castro Smith weave this in with Lin-Manuel Miranda’s exquisite original songs to help this dazzling animation sparkle. The effort has ensured that Disney’s candle burns brightly and continues to live up to the lofty expectations audiences have come to expect from Disney Animated films.

The studio is going strong, and they put up a banner reminding the viewer that Encanto is their 60th animated effort. Before and after this, a burning candle graces our screens. It can be seen as the manner in which the flame of Disney still burns bright. Furthermore, it provides us with a question as to why the flame is so crucial to the story and the Madrigal family. 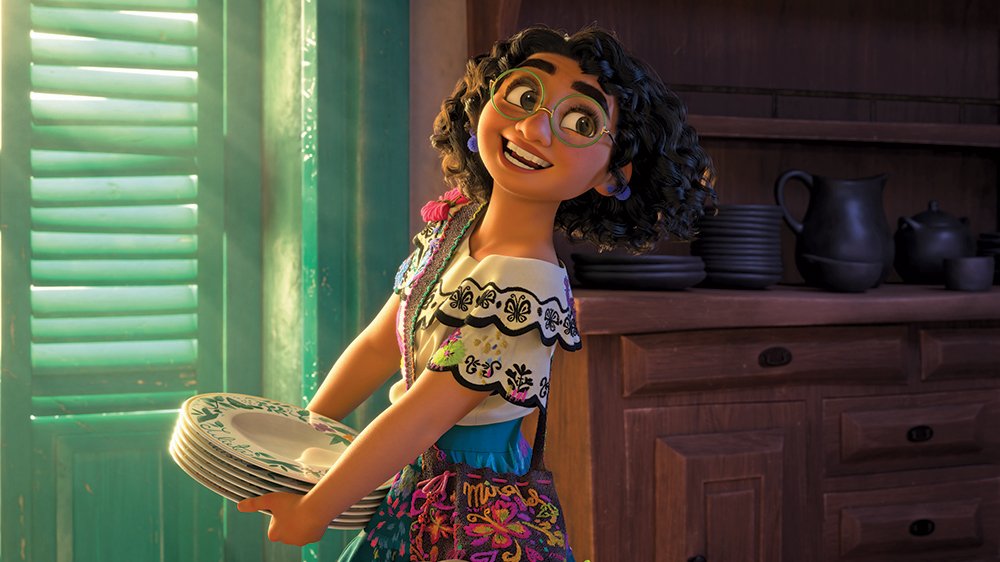 The matriarch, Abuela, possesses a candle that grants powers to all members of the family when they reach a certain age. While some are super strong, others can have the power to command flowers to bloom at their will. Super hearing, premonitions, and weather control are some of the other powers. The Family Madrigal (also a song) uses these abilities to serve the villagers.

They also get rooms, massive rooms that are huge, as seen when we witness the room of Isabella or even the tower of Bruno. It’s clear that it has been a while since the last gift as the children pay homage to literally every single companion of The Doctor as they exclaim- “It’s bigger than on the outside”, after being invited to their first ceremony.

These rooms reflect the characters’ abilities and we get reminded of Jungle Book from one of them. From Isabella’s room, you can think of literally every single Disney Princess.

However, every charm has an expiry, and that is what provides Encanto with purpose. The film follows the trend of having the oddball become the saviour. To help this stand apart, Lin-Manuel Miranda outdid himself.

Encanto brings out his genius as it relies on the lyrics and music (by Germaine Franco) to advance to the end and drop clues throughout.

This film kicks off with the emotional Dos Oruguitas. When combined with the scene of the Madrigals fleeing their enemies and Pedro’s sacrifice, it can tug at the heartstrings of the audience. Clues emerge from the song “We Don’t Talk About Bruno”. It is thanks to this song that the character gets his name in the film.

Of course, a first glance may not prove to give the viewer a glimpse of the clues; to spot them, you really need to ensure that you aren’t swept off your feet by the vibrant animation or just caught singing along. A tough task indeed! The creepy green-eyed character walking on eggshells at the top of the screen prompted a rewind. The song also highlights the abilities of each Madrigal and is particularly prominent when Dolores whispers her lines.

Thanks to the abilities of each family member, the songs don’t require the characters to enter dream mode. This is because they can just exhibit their powers and let the Disney animators and cinematographers bring the directors’ colourful vision to our screens. It is prominent in “What Else Can I Do?”, where Mirabel and Isabella go on a magical floral joyride.

Encanto is a film that has important messages and also shows adequate representation. Furthermore, it breaks stereotypes and shows that the biggest villains are the ones who can also be the biggest heroes if they tried or just understood. This Disney film set in Colombia will run wild throughout Awards Season and finally take the studio back to the top.

Disney animation’s sixtieth offering will charm audiences with its songs and visuals and cast a spell on them, leaving them enchanted by the magic that they have come to expect as the norm. But watch this to bask in the glory of Lin-Manuel Miranda.

Section 8 Movie Ending, Explained – Who was behind Jake’s family’s murder?