In September 1951, Akira Kurosawa’s Rashomon won the top prize at the Venice Film Festival which subsequently put Japanese cinema on the world stage, signaling the arrival of a decade that would later be acknowledged as the golden age of Japanese cinema. It was the decade where the classical silent-era film-makers – Kenji Mizoguchi, Yasujiro Ozu, and Mikio Naruse – made their best works alongside the young, promising post-war Japanese film-makers. Yet there was only one female film-maker who was active during this time. She was Kinuyo Tanaka, the biggest star of the time predominantly known for playing chaste, charming lead characters in Kenji Mizoguchi’s films.

Kinuyo Tanaka directed six films between 1953 and 1962, and for a long time was mistakenly recognized as the first female film-maker of Japan. That credit actually belongs to Tazuko Sakane (1904-1975). She made her first and only film, Hatsu Sugata (New Clothing) in 1936, and in her three-plus decade career in the film-making industry, she worked in various positions, from assistant director, script supervisor to the editor. The story of Sakane’s lost dreams is lamentable as the Columbia University article mentions, “Sakane has long been marginalized, if not erased, from the history of Japanese cinema” [1].

Unlike Sakane, Tanaka’s status as star brought her directorial works positive media attention. But still, she faced challenges in securing finance for her features and was often subjected to scathing criticisms, often questioning her skills as a director. It all reflected the deep-rooted discrimination against women in the male-oriented film-industry, and on a broader aspect, it illustrates the strict gender norms enforced by Japanese society. Though Tanaka has worked with all the prominent directors of the era, she developed her own specific style which genuinely reflected female perspective and (sexual) desires. Interestingly, Tanaka was the only female director who held the Directors Guild of Japan membership until her death in 1977. Apart from the industry sexism, Kenji Mizoguchi seemed to have played an active role in blocking the directorial aspirations of Sakane (in whose case he succeeded) and Tanaka [2]. 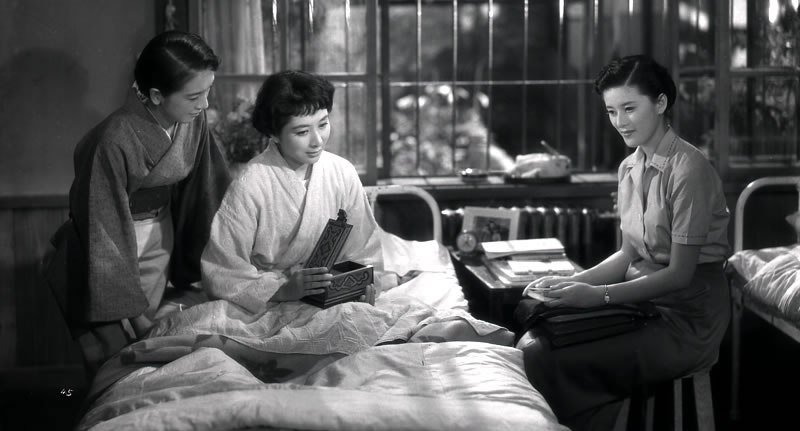 Love Letter (1953) marks Tanaka’s directorial debut. Released a year after the end of the American occupation of Japan, the melodrama revolves around a troubled man who gets a job writing love letters for Japanese wives/girlfriends of US soldiers returned stateside. While Tanaka’s first directorial feature was scripted by Keisuke Kinoshita and her sophomore feature The Moon Has Risen (1955) was scripted by Yasujiro Ozu, it was Tanaka’s third directorial attempt which happens to be her best. Scripted by Naruse’s long-time collaborator Sumie Tanaka (no relation with Kinuyo Tanaka), Eternal Breasts (Chibusa yo eien nare, 1955) chronicled tanka poet Fumiko Nakajo’s (1922-1954) battle with breast cancer. Even though it was made a year after Fumiko’s demise, director Tanaka avoids sentimental treatment of her heroine, and more importantly, she dealt with a subject matter that was, in its time, considered taboo (not just by the Japanese, but film industries all over the world): female sexuality.

Related to Eternal Breasts: An Angel at My Table [1990] – A Fitting Tribute to a Great Artistic Soul

In Eternal Breasts, Fumiko Shimojo (remarkably performed by Yumeji Tsukioka) is a Hokkaido housewife enduring a failed marriage with her resentful and unfaithful stockbroker husband. Fumiko tries to be the proverbial good wife, at least for the sake of her two little children, Noboru and Aiko. She finds solace by using her unhappy domestic reality as the source of her poetry. She also joins a local poetry circle, the members of which mostly hail from better class and bolstered by superior education credentials they call her poetry ‘an exaggeration’. Though the sensitive Fumiko is bothered by such criticisms, pushing her to question her ability to write poems, she regularly visits the place to see her friend, Hori (Masayuki Mori). Hori is Fumiko’s long-time friend with whom she is secretly in love and who is married to another friend, Kinuko (Yoko Sugi). He likes the gritty realism found in her poems and encourages Fumiko to write more.

Nevertheless, Fumiko’s unhappiness and suffering only escalate from then on. First, she removes herself from the cold marital home and moves to the considerably wealthy home of her mother. But the social niceties in place make Fumiko’s existence as a single-mother harder.  While her family rigorously approaches a matchmaker for remarriage, Fumiko is diagnosed with breast cancer. She undergoes a double mastectomy. But it’s too late for surgery as Fumiko spends her post-mastectomy life in the hospital bed. Yet though death seems closer, Fumiko deeply ingrains a will to live, re-discovers her sexuality, and remains self-confident as a poet.

Meanwhile, Fumiko’s poems get published in the Tokyo Daily News. She is happy about the praise it receives from the critics, but the young Tokyo reporter’s article makes her wonder if the friendly attention is out of pity. The Tokyo Reporter, Akira Otsuki (Ryoji Hayama) who visits Fumiko at the gloomy wing of Sapporo hospital also seems keen to publish her recent poems for the sake of selling newspapers. But gradually they get to know each other, and tentatively it develops into a romantic and sexual relationship. Even though cancer rapidly moves through her body, Fumiko blossoms as a fine poet. The brief blossoming of Fumiko inevitably ends with her death, and leaves us with one of her wistful poems addressed to her two kids, requesting them to ‘accept her death’ since it’s the only thing she has ‘to bequeath them’.

Although Eternal Breasts portrays the last few months in a woman’s life living under the shadow of terminal illness, director Tanaka’s (and writer Sumie Tanaka) treatment of the character avoids the main tenets of melodrama. Apart from the final tear-jerking sequence where the silent presence of Fumiko’s children deepens the implications of the tragedy (even here Tanaka’s sense of staging is impeccable), Eternal Breasts is utterly devoid of melodrama. The brilliance of Tanaka’s approach to the material, however, doesn’t just lie in her fluid camera movements or in staging the sequences set inside the shadowy, purgatorial hospital room & corridor. It actually lies in her uncompromising attitude to honestly portray such an ‘imperfect’ female character.

Fumiko is allowed to be impulsive, particularly pertaining to matters of sexual nature. The heroine rejects her role of housewife, avoids the topic of remarriage, and yearns for sexual intimacy (and achieves it) with the reporter which are all showcased from a strong subjective point of view. Though viewers might be naturally sympathetic to her physical pain, it’s interesting to see how Tanaka presents the alleged ‘fuzzier’ moral code of Fumiko in a defiantly humane manner.  Mizoguchi, Ozu, and Naruse’s works did offer a progressive representation of female characters, but such characters’ sexuality and desires were never approached with such openness. In fact, Fumiko is the exact opposite of the characters Kinuyo Tanaka often played on-screen as this was a female experience not commonly examined in Tanaka’s roles.

The actor-turned-director’s unflinching portrayal of the female body also makes her a distinct film-maker among the canon of women-centric post-war Japanese cinema. The unsettling mastectomy sequence, shot in series of close-up shots, includes a shot of Tsukioka’s bare breast. Later in the narrative, Fumiko playfully displays her scarred chest to her friend Kinuko. The camera angle blocks the view, but Kinuko’s dismayed facial expression impacts us as much as the explicit imagery would have. The scene showcasing Fumiko’s husband’s infidelity and the sensuality with which Fumiko embraces and kisses Otsuki is also arresting for its details. This comes from a time when such imagery was rare in Japanese cinema (Ko Nakahira’s Crazed Fruit which released in 1956 caused more controversies among Japanese censors and critics than Eternal Breasts).

Though decidedly grim and straightforward, there’s also something unforgettable in the manner Tanaka stages the infernal hospital corridor scenes. When Fumiko is finally taken through the corridor and into the iron gates marked ‘morgue’, the film-maker pushes us to accept death for what it is rather than sentimentalizing the moment with superficialities akin to saying, ‘artists never die’.  Eventually, the sepia tint adds to the elegiac tone of the proceedings even though the existence of this version remains a mystery [3].

Overall, The Eternal Breasts (110 minutes) offers one of the significant & distinguishable portrait of Japanese society from a women’s point of view. It tells the tale of a broken yet spirited poet who discovers her truer self while preparing for the final journey.

Beneath the Shadow [2020]: ‘NYAFF’ Review - A Slow-Burn Queer Drama That Withers Before Bloom