I couldn’t help but feel underwhelmed and disappointed last night after exiting the giant IMAX auditorium. Captain Marvel  –  The 21st film in the Marvel Cinematic Universe is among the weaker entries in what’s currently the world’s most popular franchise.

Also, Read – 10 REASONS WHY SPIDER-MAN: INTO THE SPIDER-VERSE IS THE GREATEST SPIDER-MAN MOVIE EVER

Captain Marvel’s plot doesn’t break any new ground and is a mix of multiple tropes we’ve seen before. As an origin story, it just gets the job done rather than bring any new or exciting ideas to the table. There are twists that are foreshadowed from miles away. The screenplay never generates a flicker of tension or excitement. The title character herself is underdeveloped and undeserving of the talents of Oscar-winning Brie Larson. Also, the narrative makes her character so ridiculously overpowered by the final battle that it removes any stakes or real challenge.

This is among the few MCU movies where I didn’t feel there were any memorable or well-choreographed action sequences. It all felt quite ordinary and like it had more editing and cuts than usual. Surprisingly for an MCU movie, the visual effects in some portions and in the final fight felt lacking too. 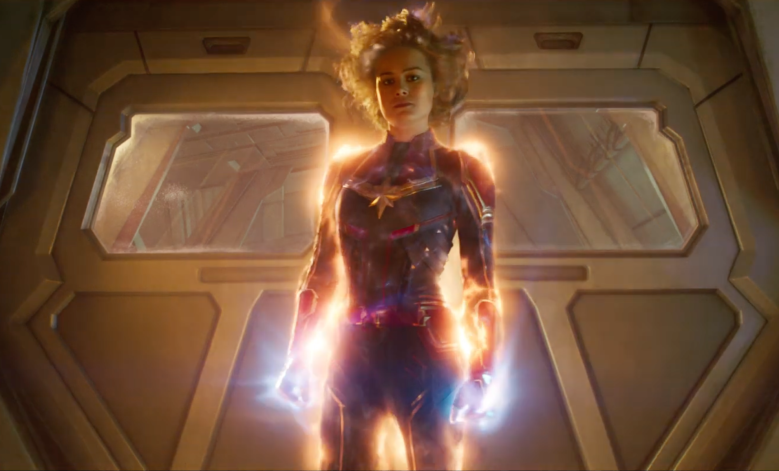 Brie Larson is a talented actress and an excellent choice for the role. She does the best with what she gets. She definitely could have been even better had the script allowed it and given her more to do. Her chemistry with Samuel L. Jackson is delightful though, and he’s an absolute treat playing a younger Nick Fury in the films best visual effect. Some supporting actors get their moments to shine too – Including a cat. It’s the villains that ultimately feel half baked and we never fully understand their motives.

What works about Captain Marvel is the winning chemistry between its lead characters. Carol Danvers and Nick Fury play off each other really well. They’re witty, amusing and entertaining. The 90s setting adds a fun nostalgic kick. Ben Mendelsohn and Lashana Lynch are compelling in supporting roles too. The film has the MCU’s signature humor style and plenty of zingers. While it’s dialed back and a few jokes seem forced, a good number really land well. The world building and back story is also well executed and adds more layers to this growing universe. It’s also short and fast-paced so goes by quick and breezy.

Also, Read – Who is Tony Stark?

Captain Marvel is one of the MCU’s strongest characters that’s unfortunately trapped in one of its weakest movies. There’s enough good here to make for a mildly engaging one-time watch, but Brie Larson and the fans deserved better.

Starfish [2019] Review: A listless monster-film treading on the aftermaths of Grief