After Life (Season 2) Netflix Review: Described as a “dark comedy drama”, After Life is a bittersweet series about loving, grieving and coping. Created, written, directed and produced by Ricky Gervais (also starring Gervais), the second season offers itself to us as a free therapy session on making sense of the world and wanting to get better after experiencing a huge personal setback. “It is a show about mundane things” as Gervais likes to call it. “It is about the things you miss when you can’t do them, especially with the people you love.”

At the center of the series is Tony Johnson, a small-time journalist who covers bizarre stories for the local newspaper and takes neither delight nor interest in his job. In season one, we see a despairing and angsty Tony, grudging the death of his beloved wife Lisa to cancer. Struggling to make sense of the enormity of his loss, Tony dumps his grief on everyone around him and keeps threatening to kill himself, much to the dismay of his colleagues and friends. Lisa being “his only accomplishment” in life, he refuses to let go of her memories as he pours himself a drink and continues to watch her videos on his laptop every day after work.

Gervais treats depression realistically. It is the most genuine and authentic portray of depression on screen. In an interview, Gervais says, “We may not like talking about it, but death, drugs, depression and suicide is the real world.” The series compels you to think about what happens when you lose a loved one. Do the memories of them evaporate overnight? What do you do with all the love that is housed inside you for them once they die? Do you bury that love in the grave too or do you let it grow inside you, slowly festering into an ugly wound? Should we expect people to move on as if nothing has happened? Can one truly move on?

In season 2, we see Gervais answering most of these questions when a mature and kinder Tony (also a mature Gervais) abandons the idea of suicide and decides to begin afresh. Instead of filling the void inside him by punishing the world, he wants to get better for the people around him, empathizing with them and even helping them in times of distress.

The greatness of the series lies in its handling of death and suicide, peppered with curt British humour that is so characteristic of Gervais. While Gervais makes a mockery of Tony’s suicidal tendencies, it does not belittle a man’s struggle of dealing with his pain and sorrow. In a telling scene, Tony tells his friend, “I was being British by not burdening you with my problems.” The friend remarks with “Oh, but we British love gossip. Spill the beans now.” 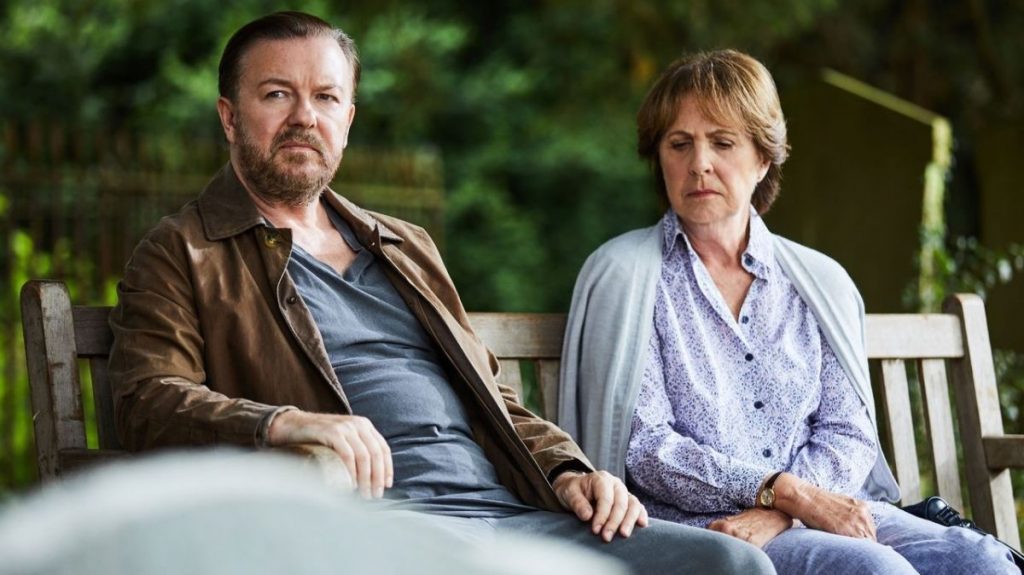 You do not have to be a fan of Gervais to take to the series though shades from his stand-up inevitably seep in once in a while. For instance, when he gets into a humorous argument with his colleague about god and ghosts and other paranormal stuff.

Even if you particularly dislike Gervais, the other characters with their well etched out sub-plots keep the momentum going in After Life (Season 2). Tony’s supportive colleagues, his good intentioned brother-in-law who also happens to be his boss, the sex worker he befriends and often has breakfast with are all endearing and pleasing to watch. Then there’s the homeless guy, the odd postman and the sweet nurse who looks after his dad at the old-age home who Tony eventually grows quite fond of. But the most endearing of all characters has to his dog Brandy, a lovely German Shepherd who becomes the primary reason for him to live on.

Tony’s job at the local newspaper entails interviewing interesting people with quirky stories and personalities. He covers a baby that looks like Hitler, a woman who claims she can talk to her cat, a married man who identifies as a schoolgirl. While these stories may seem trivial or banal, they add a comic relief to the somber undertone of the series and are symptomatic of Gervais’s comedy that doesn’t shy away from any controversial topic, be it fascism or homosexuality.

Gervais has always been fascinated with the culture of local newspapers and captures that experience well on screen. In an interview he said, and I quote, “I always look at the local papers to see the headlines when I’m in some new town. They have a story like a library book being due. I like that. That’s so much better than 12 people stabbed to death. If you read about a TV stolen in the local papers, you live in a good place.”

Is this a wiser Ricky Gervais redeeming himself? Unlike his comedy that intends to offend anyone and everyone, his series seems to be achieving quite the opposite effect. Tony seems to be melting hearts and saying “Everyone is going through their own shit. Why can’t we just be nice to others?” It is impossible to hate him. While exploring the depressing and fatalistic theme of death and loss, After Life (Season 2) ends up being an uplifting, optimistic and delightful drama that just helps you get by.

"Some people cry in the afternoon when love starts to fade. I go to the movies." Swears by Noah Baumbach and Blue Valentine. Firm believer of why rise and shine when you can wine and whine. You can reach me at @theblahcksheep