Ricky Gervais has always seemed to be different from the zeitgeist from the comedy circuit. His stand-up specials have mostly been hit-or-miss, but he has gained a niche audience based on his personality and how he employs that idiosyncrasy in his work. His humor has always been about mocking the very nature of almost everyone that he encounters. Just take a glimpse of him hosting one of the award shows and you’ll get precisely what I mean. Based on that ‘rude’ persona, he has created shows like ‘The Office’ or ‘Extras’. Now he comes up with ‘After Life’ where he seems to have grown up as a person. Not just as a character, but in real life as well. Everything that we see on screen seems to come from a deeply personal place.

Here, Ricky plays a character called Tony, who has been working as a reporter for a local newspaper. His wife, whom he had been married for around 25 years, had died because of cancer not long ago. He had lived most of his adult life revolving around her and they didn’t have any kids either. Even if he had deserved better pay or a better job in a different city, he was quite content to live the mundane routine where he got to see his wife every evening after his job. 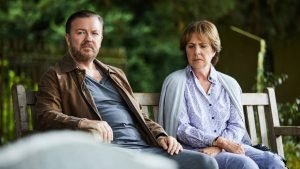 Similar to After Life Netflix: THE OFFICE (US) SEASON 2 REVIEW: GRASPING FUNNY & LIBERATING

After her death, nothing seems to satisfy him. As one of the characters says, he tries to appear cold-hearted than to feel anything at all. His only reason to live was taken away from him, which is why; he loses interest in being alive. Still, all his mocking and narcissism is intact. The ennui doesn’t have any effect on his inherent nature. That’s where his process of growth begins. So, the remorse and grief make him try to seek for things that he often neglected.  From his standpoint, it seems genuine.  It does get sappy and overly mellow at times. But, the intent never lets you lose the interest.

‘After Life’ is basically about the grief of a person who doesn’t believe in after-life in any desirable way. There are general antics of Gervais as an atheist and him explaining his disbelief. It is something that we have often seen him discussing on late-night shows. Despite that, even if the mocking gets a few laughs, it isn’t particularly fresh or new in his approach towards comedy. What is refreshing though, is his changing outlook on life. His performance seems earnest. The change in his character, from being completely narcissistic to being a caring and understanding individual, feels like a mature step forward. 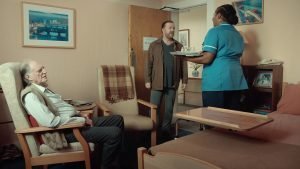 Ricky’s character Timmy is shown to be interacting with people to reflect nothing but self-pity and suicidal thoughts. His brother-in-law, who happens to be his boss, takes efforts in building his will to live. Other characters, some of which he uses for mere amusement, also try to look for his better. The characters that we see, work mostly as devices through his healing than having a personality of their own. That’s probably why it doesn’t reach its complete potential.

That surely helps the narrative to focus on the relationship between him and his late wife that he (and so do we) meet through the videos she had recorded. She knew the niceties of him whereas his outwardly rude presence had often deluded others to think otherwise. Unlike his therapist who hardly seems to care for his well-being, late wife’s presence gives him momentary relief. All of this was unlike anything that one would expect from someone like Gervais. Yet it makes perfect sense why he must have made this.

[WATCH] Ready Or Not Trailer: Samara Weaving fights for Survival in a Deadly Game