Praveen Morchhale’s beautifully nuanced third feature Widow of Silence (2018) opens with a mute, passive old woman getting tied to a chair in a small, sunlit room. The younger woman after tying up the old lady waters the plant, placed in the windows sill. This contradictory gesture subtly forebodes the more haunting paradoxes within the tale, which is set in the picturesque valleys of Indian-administrated Kashmir. Moreover, the image of an older woman’s physical entanglement remains as a metaphor for the state’s confined status. Aasia (Shilpi Marwaha) is a ‘half-widow’ – a term that denotes Kashmiri women whose husbands have disappeared but are not declared deceased – who supports her 11-year-old daughter, Inaya (Noorjahan) and mute, semi-paralyzed mother-in-law with her meager earnings working as a trainee nurse.

Seven years before, Aasia’s husband has been taken away by the Indian security forces. His fate remains a mystery (while the true number of half-widows in Kashmir remains unconfirmed, the publicly reported figures stand between 2,000 and 2,500). Aasia hasn’t given up hope about her husband, but she also understands that she must move on at least for the sake of her daughter. Several times a week, she makes the arduous trip to the local government office to obtain her husband’s death certificate. The certificate is not just to find some closure, but also to gain sole (and rightful) ownership of her husband’s land in order to secure Inaya’s future. Aasia’s parents want her to get remarried to a local teacher and stop wasting money on deceivers who promise to bring news of her husband.

The sleazy and corrupt government official (Ajay Chourey), however, starts to prey on Aasia’s vulnerable situation. It leads to the woman getting caught up in a bureaucratic limbo, which she endures to an extent with dignity. Meanwhile, Inaya gets bullied by her peers at school for being fatherless and processes her dad’s disappearance in her own way, often posing the question haunting her mind (“was my father a bad man?”) to her mute grandma, who seems to have taken permanent refuge in silence. 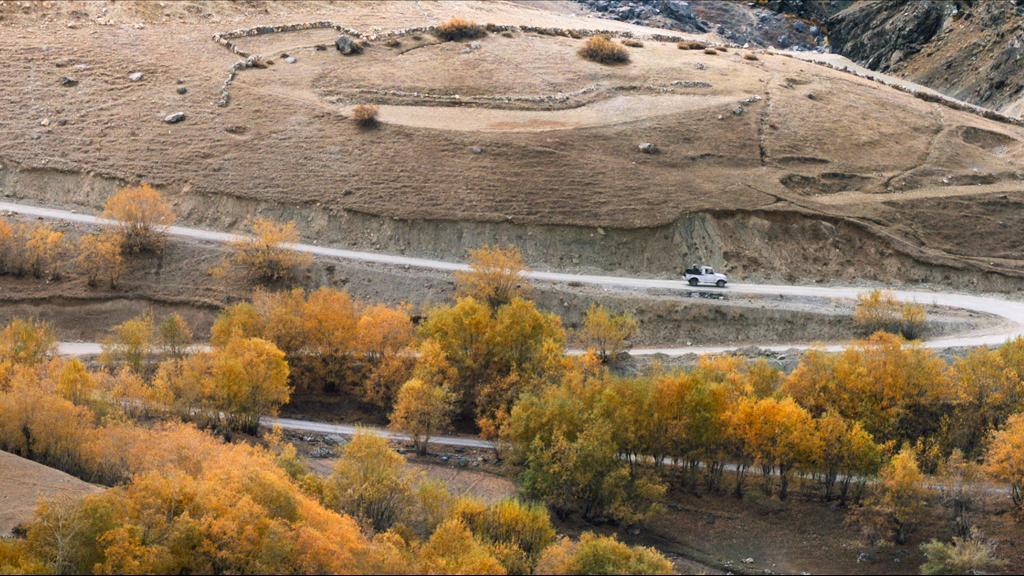 Writer/director Praveen Morchhale’s unique unsentimental look at the Kashmiri conflict is also interleaved with lyrical visual passages, involving a taxi-driver (Bilal Ahmed) who mourns the loss of humanity in a tranquil valley, now fragmented by military check-posts and resounding with gun-fires. Nevertheless, he maintains an optimistic outlook on people (he gifts a Kashmiri apple to a soldier guarding a checkpoint). And although Aasia doesn’t say much in her daily taxi trips, the charming driver’s poetic insights brings due context to the narrative without a hint of melodrama.

Widow of Silence is an apolitical yet offers a very powerful look at the unwinnable quagmire of Kashmir crisis, in which there’s no end to the anguish and dismay of half-widows. While Mr. Morchhale’s previous two films (‘Barefoot to Goa’ & ‘Walking with the Wind’) focused on child characters and revolved around the themes of innocence and love, his third feature perfectly channelizes the inner pain and anger of an exhausted woman. Mr. Morchhale has matured more as a storyteller; his minimalistic approach combined with the perfectly-pitched layering of information gradually adds depth to the character and her delicate situation. Collaborating once again (after ‘Walking with the Wind’) with the Iranian cinematographer Mohammad Reza Jahanpanah (‘Closed Curtain’), the film-maker has interjected the Abbas Kiarostami-like aesthetics, particularly discernible in the use of long shots (the camera also lingers long enough to take in daily life).

The juxtaposition of the images of common folks (engaged in idle conversation) inside the van with the extreme long shots of landscapes pits the beauty of the setting, alongside the veracity of the average peace-loving folks’ hard reality.“Living in heaven and hell at the same time is very difficult”, the driver muses on the incongruity existing between the natural atmosphere and state of life in Kashmir. The dilemma and uncertainties the half-widows confront on a daily basis may not be easily understood by those unaware of the Kashmir crisis. But the narrative largely deals with a single mother’s struggle to lead a dignified life and the absurdity of bureaucracy which lambasts the people it ought to serve.

The mixed casting of non-actors and professional performers conveys the emotions and truth of the setting without much dramatics. Shilpi Marwaha, a veteran actor of Delhi theatre, allows her remarkably layered performance convey the noose of oppression closing-in on her. She is particularly brilliant in the scene she tries to pass out wisdom to her daughter (“You should not care about what others say. Only you know what is your truth. Others lies cannot become your truth”); the tangled emotions of Aasia’s frustration, fear, and yearning subtly rises to the surface. Bilal Ahmed’s driver character is a welcome addition to the narrative. His cheerful, as well as contemplative exchanges, serve as a perfect counterpoint to the distasteful and fallacious portrait of Kashmiris in Indian mainstream media and cinema.

Overall, Widow of Silence (85 minutes) explores the tragic fate of Kashmiri half-widows that’s devoid of familiar political posturing and rhetoric. It rises up to the formidable challenge of telling Kashmir’s suffering without investing in melodrama.

“WIDOW OF SILENCE” WILL BE SCREENED AT THE 10TH LONDON INDIAN FILM FESTIVAL, 2019
CLICK HERE FOR OUR COMPLETE LIFF COVERAGE