Beneath the Shadow [2020]: ‘NYAFF’ Review – A Slow-Burn Queer Drama That Withers Before Bloom

The spectacular Rurouni Kenshin trilogy, directed and co-written by Keishi Otomo, is a source of tender nostalgia for most manga and anime enthusiasts. The action-packed, samurai sword-swashbuckling saga burst forth with heart – a suave, big-budget, live-action adaptation of the namesake Shōnen manga series by Nobuhiro Watsuki, which was an emotionally-profound, historic action-drama like no other. Having signed a prestigious multi-picture deal with Warner Bros., Keishi Otomo went on to craft a rich filmography based on promising literary adaptations. His latest endeavor, Beneath the Shadow, is based on Eiri (影裏), a 2017 Akutagawa Prize-winning queer drama novella by Numata Shinsuke, that deals with the matters of the heart, vulnerabilities that slither in with emotional attachment, and the often-overlooked intricacies of life.

Otomo’s latest work takes a break from his usual blockbuster-approach, as it shifts gears and takes a deep dive as an ambitious arthouse project, revealing the director’s latent poetic inclinations. Set in rural Morioka, (the town Otomo grew up in), Beneath the Shadow unfolds as a voyage of self-discovery for our titular character, Konno (Go Ayano), a quiet, introverted man in his 30s, who lives alone in his apartment, toiling around, reading novels, and taking care of his beloved jasmine plant, who is more of a surrogate companion to Konno than an indoor embellishment. Having been transferred to Morioka by the pharmaceutical firm he works in, Konno is established as a lone figure, enwrapped in the monotony of his work and his somber solitude, that aches to shed off its skin and transform into something more.

On another lackluster day at work, Konno happens to meet Hiasa (Ryuhei Matsuda), a walking contradiction, a rebel shrouded in mystery, who doesn’t seem to have much regard for societal conventions. This chance encounter leads to a burgeoning bond between the two, wherein the duo drink sake together till 3 AM, accompany each other on fly fishing trips and visit carnivals together. Via the film’s lingering shots, slow-burn chemistry between the leads, and the charged, longing glances, with which, Konno perceives Hiasa, it is made amply clear by Otomo that a feverish love is brewing within Konno’s heart, whose sexuality has been established from the get-go, via nuanced visual shorthand. 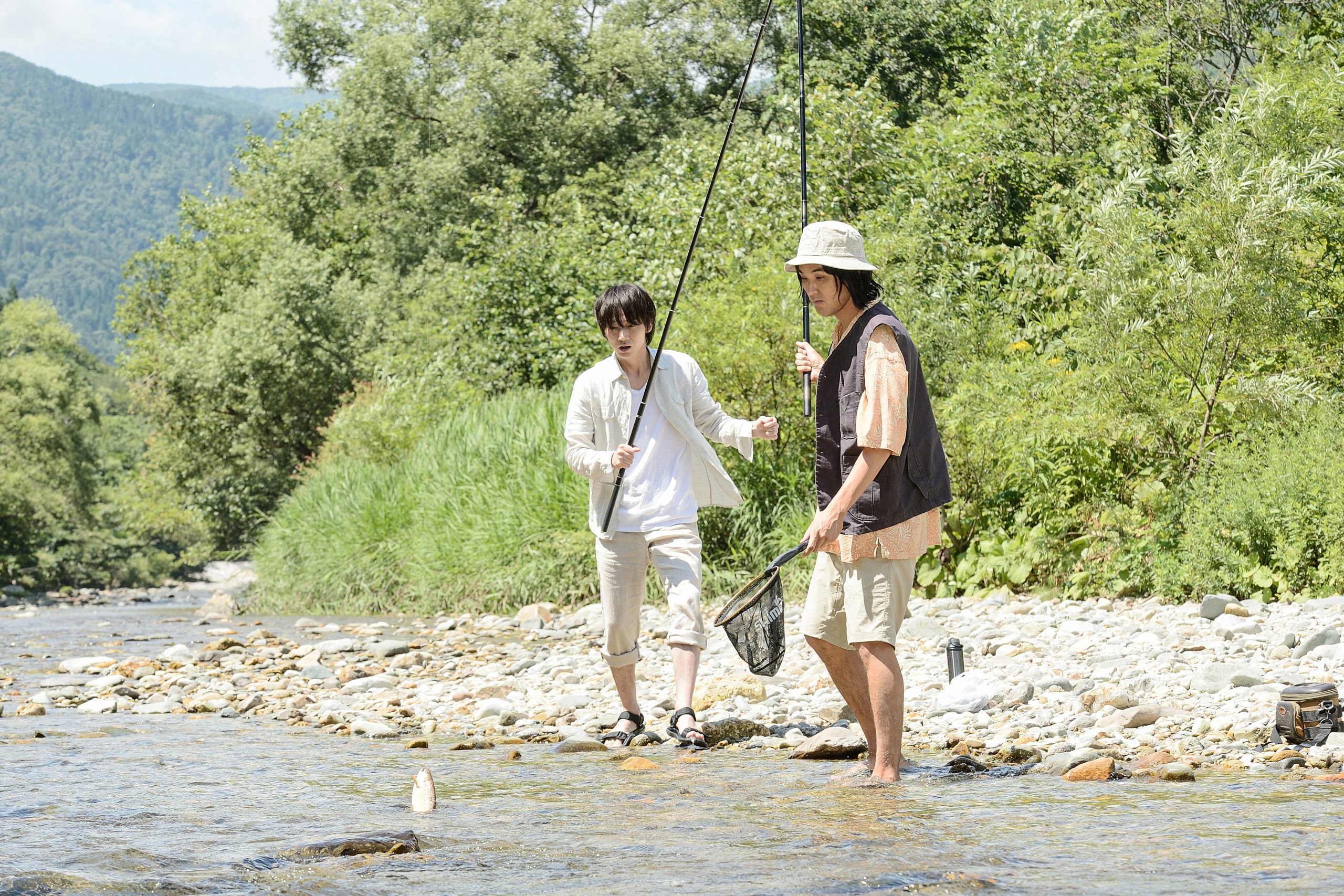 With Hiasa by his side, Konno starts blossoming as an individual – he smiles more often, participates in a sansa performance, and appears more self-assured. However, the dream-like fog dissipates, when Hiasa quits his job and disappears abruptly, only to return to Konno’s doorstep, months later, a slick-haired salesman for an insurance company that appears fishy, to say the least. The duo resumes their friendship, and their bond seems as charged as ever – especially when Hiasa offers Konno a ripe pomegranate, splitting it in half, and teaching him how to devour the fruit. Pomegranates have been believed to carry symbolic and mythological connotations – from being the forbidden fruit in major monotheistical faiths and a motif for sexual awakening, as exemplified in the Greek myth of Persephone.

Konno’s feelings for Hiasa explode in a seminal scene, in which, Hiasa alerts Konno of a snake coiled on his chest, unbeknownst to him, as the latter was fast asleep. When Hiasa tenderly asks him, ‘Are you okay?’, Konno is unable to repress his true desires any longer and attempts to kiss a seemingly-oblivious Hiasa, who rejects his advances. Hiasa chooses to stick around even after this incident transpires, adding fuel to Konno’s pain and heightened sensitivity, which culminates into a confrontation-of-sorts as the two sit under the stars, near a bonfire. With heartwrenching cruelty, often displayed by those who feel wronged or misunderstood, Hiasa tells Konno: “Don’t act like you know everything. What you see, is where the light hit for an instant, no more than that. When you look at someone, you should look at the other side, the part where the shadow is deepest.”

Post this, the devastating 3/11 Tōhoku earthquake and tsunami strikes Iwate Prefecture (of which, Morioka is the capital city). Hiasa disappears amid this disaster, leaving Konno desperate and frantic, as he never got to say goodbye or ensure his friend’s well-being. During his search for Hiasa, the truth starts to unravel, revealing Hiasa’s unsavory side, which is similar to the art of baiting fish, which involves stringing the worm along the edge of the river, right before capture. Ayano’s performance peaks during his emotional climax nearing the end of the film, in which, he embraces his sexuality in full-light, along with the tormenting pain of letting go of someone who doesn’t love us back, quite in the same way. 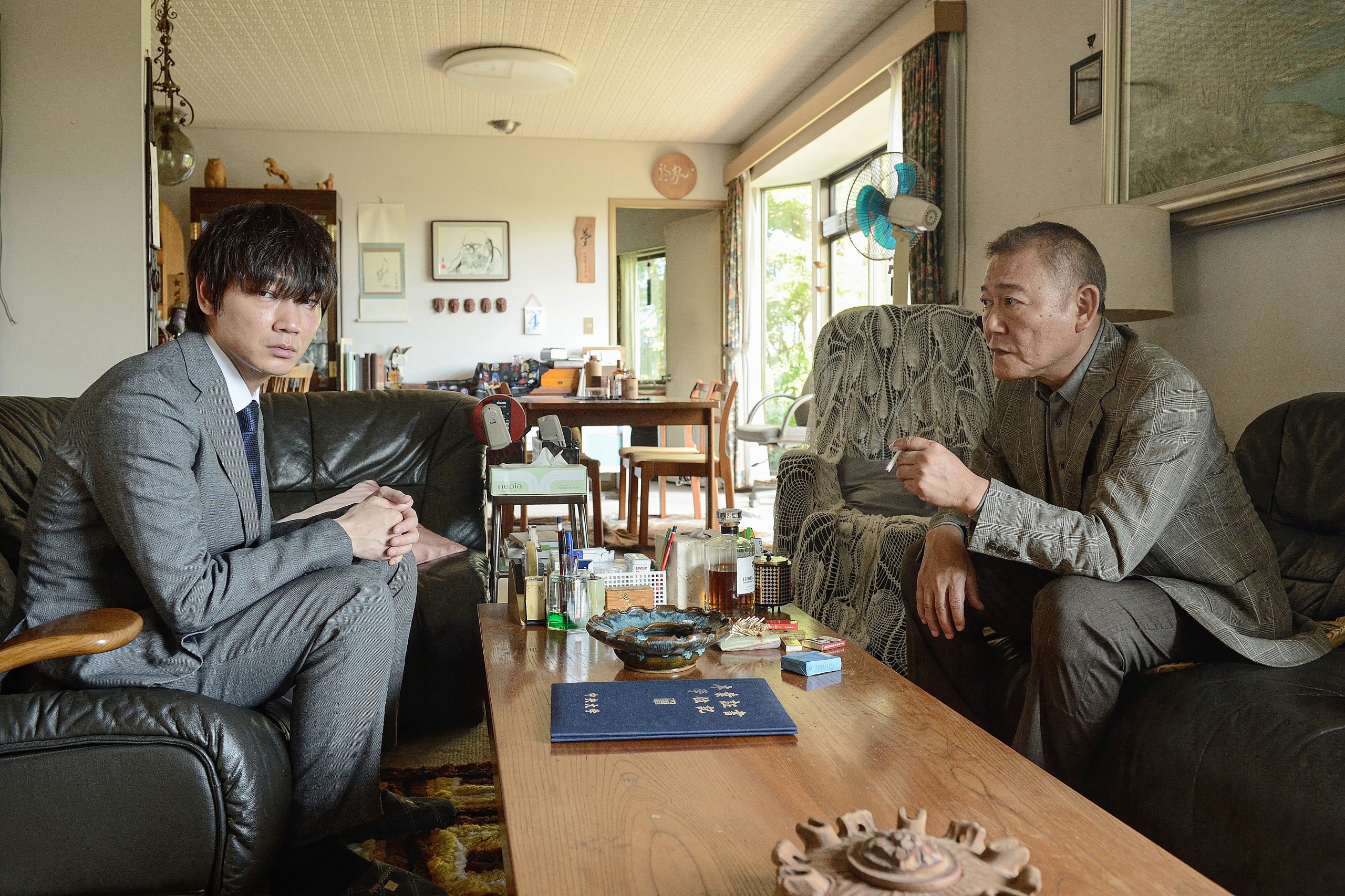 Despite a stellar performance by Matsuda, who shines as the enigmatic Hiasa, and solid supportive performances by Jun Kunimura and Mariko Tsutsui (the former plays father to Hiasa, reeling with the trauma of potentially losing a loved one to the 3/11 disaster), Beneath the Shadow‘s two-hour runtime, feels like an eternity, flitting between mild mystery and unremarkable mood piece. The pacing seems stunted, the exposition over-long, and the overall impact of the film is overwhelmingly disappointing.

Despite featuring dream-hazed, artless stills of natural landscapes and metaphor-laden queer subtext that seem promising, Beneath the Shadow fails to bloom, frozen amid the brambled-reality of ‘might-haves’ and ‘could-have-beens’.

Beneath the Shadow Trailer

‘BENEATH THE SHADOW’ WAS SCREENED AT  THE  2020 NEW YORK ASIAN FILM FESTIVAL
CLICK HERE FOR OUR COMPLETE FANTASIA COVERAGE.

Beneath the Shadow [2020]: ‘NYAFF’ Review – A Slow-Burn Queer Drama That Withers Before Bloom