In the initial viewing of Sexy Beast, the sheer force of Kingsley’s Don Logan would arrest our whole attention. But the later viewings would convey Glazer’s shrewd directorial touches. The way he builds up the film’s core action through elaborate, unwinding, and slightly improvised dialogues adds up a lot of grim fascination.

Ex-criminal Gary ‘Gal’ Dove (Ray Winstone) is blissfully enjoying his retirement with his ex-porn star wife DeeDee (Amanda Redman). Gal bakes in the sun, lounging by the pool at his isolated Spanish villa. He is utterly relaxed at the prospect of finally living in a sunny world, far away from the cold life of a career criminal in London. After tanning, Gal is about to take a dip into the pool. At the same time, a huge boulder comes loose from the hill above Gal’s villa, missing him by few inches, and crashes into the pool. This unforeseen intrusion upon Gal’s fresh, placid life only happens to be a sample of more evil that’s about to intrude. Thus begins Jonathan Glazer’s ultra-stylish debut feature Sexy Beast (2000), an evidently simple crime narrative which attracted universal raves for the immaculate attention to characters and thunderous performances.

Gal is a retired safe-cracker, whose initial laid-back monologue conveys his absolute love for his wife. The couple’s life at the modest Spanish desert villa is further enriched by the constant presence of friend/former associate Aitch (Cavan Kendall) and his lover Jackie (Julianne White). They obviously feel insecure yet they are good at hiding behind the facade of normalcy, enjoying the permanent suntan and having dinner at luxurious restaurants. However, Gal’s new life is about to be flattened by a boulder of sorts, bearing the name Don Logan (Ben Kingsley). Feelings of utmost terror graces Gal and others’ eyes when the dreaded Cockney gangster’s name is first uttered. Don Logan will be arriving next day to discuss about a ‘job’ with Gal. Even before the bald-headed, humorless, dangerously unpredictable Don enters the frame, one thing is clear from Gal’s painful expression: You can’t say ‘No’ to Don.

When Kingsley’s unsmiling and relentlessly abusive Don arrives, the narrative’s hugely attractive showdown begins. Immediately after this entry, Don demands Gal to fly back to England and take part in an elaborate heist orchestrated by formidable crime lord Teddy Bess (Ian McShane). Gal gathers his nerve to say no to the job. Hence, the vicious psychopathic criminal decides to stay a couple of days to wear down Gal with his bullying and inventive, rapid-fire verbal abuse. When Gal remains stubborn, Don plays cruel head-games, hurling insults at wife DeeDee, Aitch and Jackie (with whom he previously had a sexual relationship). Things go south, when Don’s terrifying explosions prompts the untapped violence to arise out of Gal and his cohorts.

It is not surprising that Sexy Beast is being remembered much for Ben Kingsley’s live-wire performance. Written by Louis Melles and David Scinto, the character of Don, offset by sharp sense of dark humor, is nothing short of riveting. Kingsley plays the dreaded gangster as a man incapable of reason. Two scenes stand-out in Kingsley’s brief yet very memorable outing: the whole airport scene; and the moment Don carries a conversation with himself while looking at the mirror and shaving. On both occasions, despite the cruel nature of the action, we can’t stop hysterically laughing at the character’s brash, uninhibited nature. Of course, Kingsley’s attention-grabbing presence wouldn’t be nearly as effective without the angst-ridden looks of co-star Ray Winstone. Mr. Winstone has often played intimidating, brutal figures; the most memorable are his presence in Nil by Mouth (1997) and The War Zone (1999). But here, Winstone’s Gal extracts enough sympathy as a guy who wants to spend his ill-gotten riches through an unhurried, simple life. The fear and detestation he expresses in Don’s presence is palpable and well-grounded. Adding further to the narrative’s menacing tone is Ian MacShane’s subtle villainy as the downright monstrous gang leader. 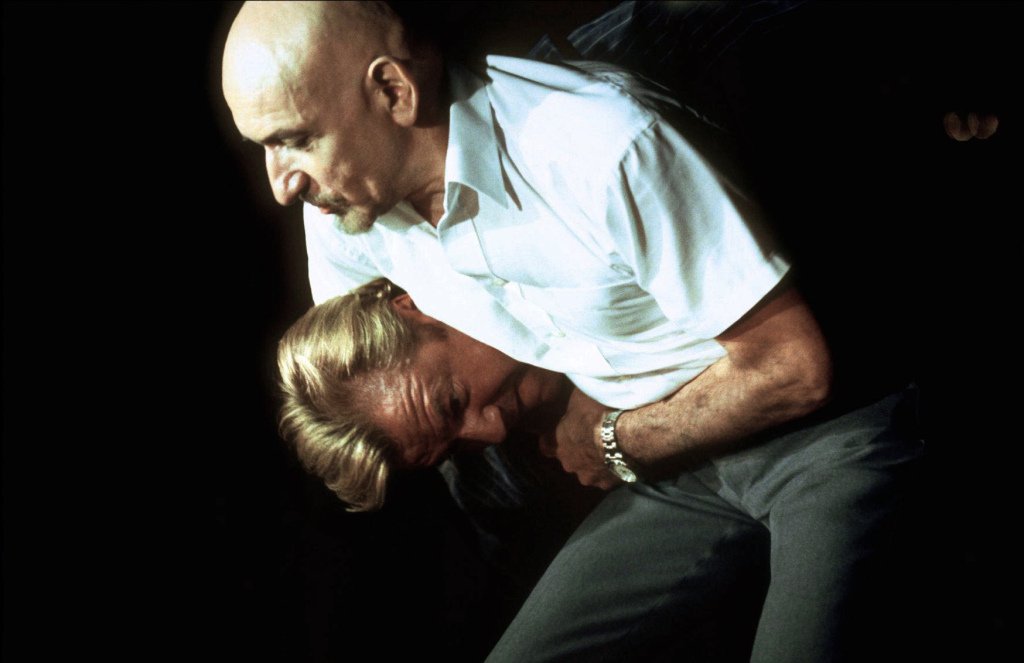 Of course, the pitch-perfect performance and unfaltering attention to character sketches says a lot about director Glazer’s ingenuous artistry. While Mellis & Scinto’s script is a bit weirdly structured, Glazer’s heedful vision is effective enough to make the jump in timelines and extraneous flair of badassery work to the movie’s benefit. Many viewers felt that the film’s third act involving the underwater heist is very brief and bit of a letdown. But the hurried execution of the bizarre heist seems deliberate, since Glazer’s focus mostly lies on the headstrong and ignorant nature of the characters. Furthermore, the emotional momentum established through Gal’s predicament finely carries this robbery sequence (the scene is also filled with minor moments of black humor). And within a concise running time of 88 minutes, the director offers a more exacting character study than what a traditional crime narrative, centered around a heist could do.

Jonathan Glazer has made only two movie since his spectacular debut (‘Birth’ and ‘Under the Skin’). Although all his three films are entirely different in terms of genre and style, it would be safe to say that Glazer’s movies are about ‘intruders’. While Sexy Beast and Birth (2004) evaluates the devastation caused by an intruder, the Kubrickian sci-fi Under the Skin (2013) tries to perceive humanity through the eyes of an alien intruder. In the initial viewing of Sexy Beast, the sheer force of Kingsley’s Don Logan would arrest our whole attention. But the later viewings would convey Glazer’s shrewd directorial touches. The way he builds up the film’s core action through elaborate, unwinding, and slightly improvised dialogues adds up a lot of grim fascination (in the words of Don, it’s all about ‘preparation, preparation, preparation’). Unlike Guy Ritchie, Glazer employs the little substance available in the narrative to dictate his style (not vice-versa). Glazer’s penchant for impressionistic lighting and enticing widescreen shots are comprehensible in this earlier work. Working with cinematographer Ivan Bird, Glazer’s tableaux of sunny Spain in the first-half perfectly contradicts the later portions’ depressing, wet, and cramped interiors of London. Even the spatial design differs, as the earlier imaginative widescreen shots provide a large breathable space for Gal, the man desiring for the detachment from his past. More interesting is the inclusion of subtext providing Uzi-gun-wielding hare monster, as if the Satan himself is testing Gal’s stoic stance against life of criminality.

The plot of Sexy Beast might be slight or lean, but the unforgettable central trio of characters and flawlessly original visual flourishes turns it into a high-style crime drama. Ben Kingsley’s unhinged Don Logan makes it a must-see, obviously.