Coen Brothers’ adaptation of Cormac McCarthy’s novel, No Country For Old Men (2007) is nothing like your usual neo-western but the complete deconstruction of a classic good vs bad tale. As in each of those stories you have here, a good guy, a bad guy, and then a morally sound and honest cop but the conclusions to each of their stories are not what you would expect from a setup like this. The good guy dies, the bad guy, even after all the crimes he has committed get to live and the cop never meets any of these two men or even a chance to fire his gun for once. And, the story doesn’t end in action but from a very silent monologue cutting to a black screen, it ends with a question mark.

Similar Read To No Country For Old Men: The Shining (1980): Claustrophobia And Insanity

In many ways, No Country For Old Men is about certain things we never understand, about somethings that the harder we think for them to make sense, the more absurd they feel. What are those things? Well, they are just humans, their greed, their obsession with wealth, their inability to distinguish things that are as simple as right and wrong, good & bad, sane & insane, moral & immoral, and above all, it is the very moral ingredient of good and evil. The film never tries to answer these questions but treats them with dualities and the contrasting POVs.

Throughout the film, there are so many visual showcases of these dualities via the perfectly constructed and composed shots of Roger Deakins but the ones that are more striking and thematically more coherent to the film are the dualities exhibited through text. The coin in No Country For Old Men is more than just a metaphor for how Anton Chigurh (Bad guy) approaches and treats anything in life.

Related Read: A Decade On: No Country For Old Men

The Coin is a tool to bring out the duality between the two characters in the film, Chigurh and Tom Bell (Sheriff). ⁣Chigurh goes to Moss’s trailer home, drinks milk gazes at the TV, and in the very next scene, we see some similarly composed shots of the previous scene. Bell drinks the same milk, sees the same things that Chigurh saw, and just like how Chigurh is entrapped within his own principles (image inside a tv) we also get a similar image of Bell entrapped within his own principles.

But, Chigurh and Bell are entirely different characters with morals that are as contrasting as black and white. For Chigurh, something that is so large as life and death is just a matter of a coin toss, for him everything in life is simple and nothing seems so absurd. On the other hand, we have the Sheriff, trying to make sense of human nature and their behavior. 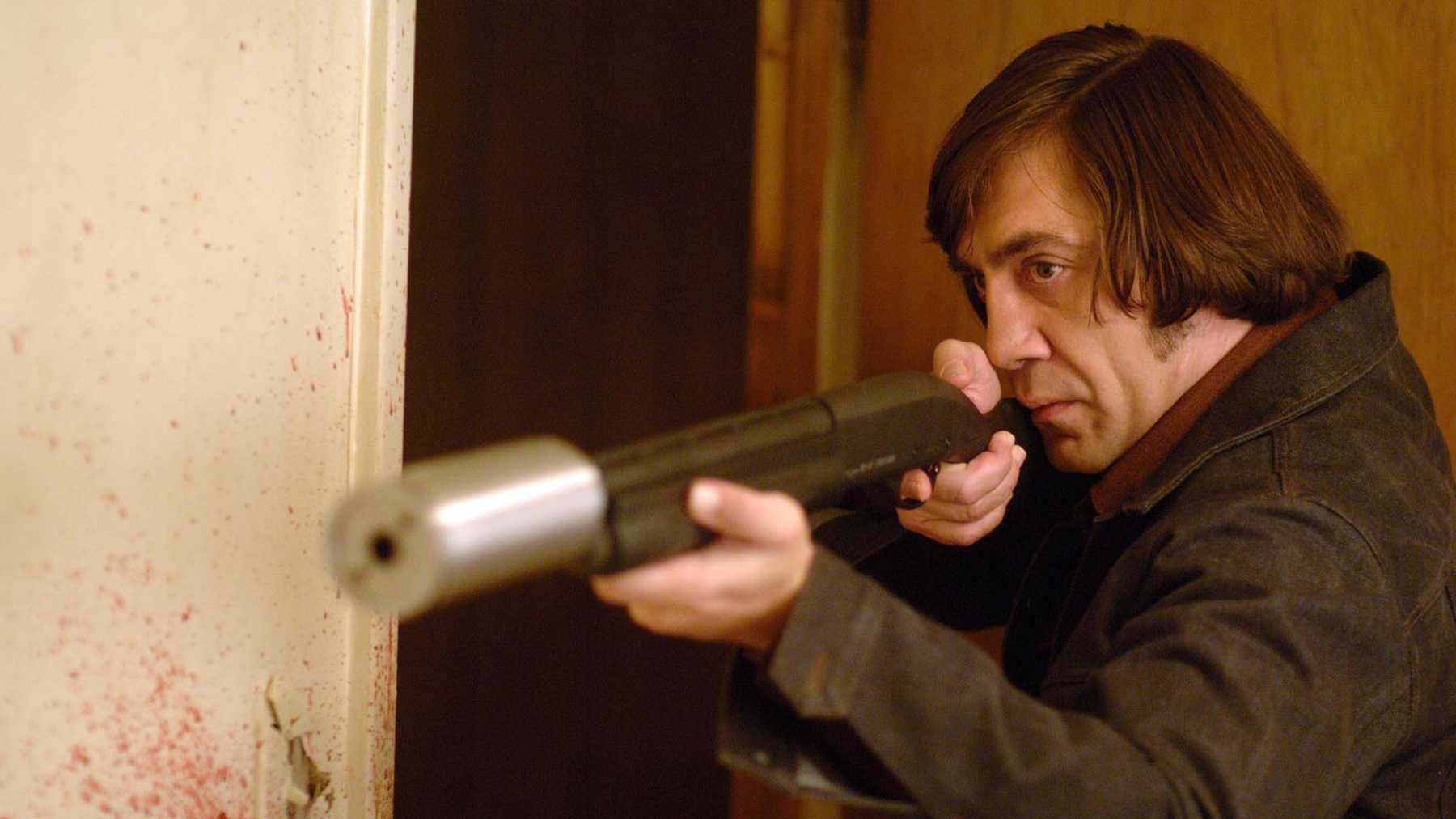 Another on the nose display of duality is from these following two scenes:

1) Moss gets hurt, in an awful looking condition somehow reaches the Mexican border. He sees a group of three men coming from the other side of the border, offers money to buy out the shirt of one of them but the man shows no pity and insists on seeing the money first. That’s not even the worst part, Moss after buying out the shirt asks for another favor, the beer from another man but no pity shown this time too but only the greed.

2) Chigurh is hit by the car, a bone sticking out of his left hand, he’s in a very bad condition, Chigurh asks for the shirt of one of the boys. Now, the setup is very similar to that of the first scene but instead of fully grown-up men we have here, three teenage boys. And, instead of greed and unkindness, the boys show willingness and heart to offer help, they refuse to take the money that Chigurh offers for help.

But, the biggest duality of all is the one we, the viewers know about, but those 3, boys and men don’t, it’s that Moss is a good man and that he has ended up in this mess not ‘cause he took the drug money but he went out in the middle of the night to offer water to one of the wounded cartel men. Whereas, Chigurh is as evil as a human soul can become.

So, what’s the difference between being good & kind to one another and being bad & evil, anyway it all comes down to the four-letter silly word called ‘Fate’, right ?. No, the film doesn’t advocate that either, following the morals and having principles are good or whatever but it’s just that nothing in life comes with a guarantee and the explanation for this absurdly harsh reality can’t be found, not even through cinema.

The Woman in the Window [2021]: Netflix Review - Predictable Hitchcockian thriller dwindles while trying to outsmart the viewer