Home»Articles»Creating an Ashoke Ganguli of his Own: Irrfan Khan in “The Namesake”
Articles/Essays

In Jumpa Lahiri’s The Namesake (2006), Ashoke Ganguli has been introduced as a ‘slightly plump, scholarly looking’ young man who wears thick black frames and has a ‘sharp, prominent nose’. When we meet Irrfan Khan, playing the same character in Mira Nair’s 2007 film which is an adaptation of the book, The Namesake, he doesn’t really fit the imagination of a person who has read the novel. Unlike The Life of Pi, another adaptation of a popular novel by the same name, directed by Ang Lee, where Irrfan appears to be hand and glove as the senior Pi Patel in his appearance and his words.

As one progresses through Nair’s movie, it becomes increasingly prominent that Ashoke’s character has been snipped, rather mercilessly in parts, to fit the length of the movie. Ashima and Gogol’s characters, played by Tabbu and Kal Penn, lord over the narratives in both the novel as well as the film respectively. However, Irrfan, as well as Mira Nair herself, has paid careful attention to the little details of his character in the book. In the process, Irrfan creates the character of Ashok Ganguli for himself which ends up complimenting the character in the novel and together, they form a memorable whole – a character as well as a person – as a namesake for each other.

In the novel, Ashoke tries to convince Gogol to keep his name before succumbing to his desire for changing his pet name to his good name, Nikhil. The narration in the book immediately afterwards this scene describes in a couple of words how signing out the consent form made Ashoke look like he was calculating the loss. The character of Ashoke in the film doesn’t pester his son to keep his name. He is more understanding even though he tries to dissuade Gogol at first. He says, “Anything is possible in America. Do as you wish” and leaves the dining table for a puff of smoke at the balcony. Irrfan Khan’s face changes in a myriad array of emotions as he leaves the table, perhaps he is also calculating the loss only there is no third person narrator to point it out to the viewers. 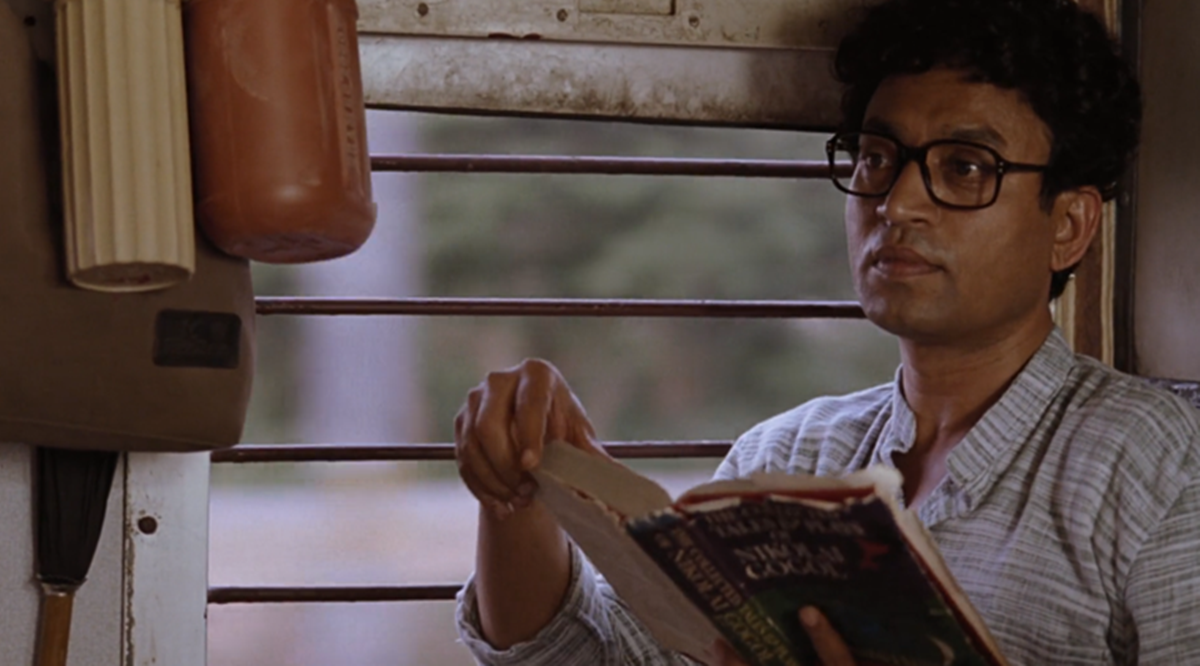 In another scene when Ashoke describes to Gogol the horrific train accident that he had been part of, the settings in both the film and the novel are different. While we see Irrfan Khan and Kal Penn sitting in their parked car during a pleasant day, this episode originally unfolds in the darkness of the night one summer when Gogol’s train is held up by an unfortunate suicide and power cut, in the novel. The character in the book, Ashoke, brings his hand to his ribs out of exclamation when Gogol asks him if his name was a constant reminder of that night of the accident.

Irrfan beautifully limits the exclamation in his voice. His eyes are teary and red, a tranquility in them as he narrates the incident. The darkness of the night required the little hand movement for the conveying of emotions but Mira Nair, Irrfan rather, captures it all through his eyes and a small laugh. It is a poignant scene in the movie and Irrfan only serves to heighten the emotions of a father who etches to be closer to his son but is bound by the temporalities of age, generation and space.

Irrfan Khan’s Ashoke compliments the Ashoke Ganguli from the novel in almost all his designated scenes. This beautifully plays out when Ashima comes to be informed about her father’s death. In the novel, it is through Ashima’s memory that the readers come to know about it. In the film, Ashoke not only looks empty of words or emotions while pinning his wife down to the bed before speaking of the unfortunate incident, he is also shown to be consoling his wife by caressing her hair as her loud screams and later, mournful silence fills their bedroom. Ashoke is a character which balances his love and regrets through easy humour. Irrfan Khan laughs and jokes around Ashima, shunning the serious air around her. His tone bears a compassion that seems to come to him naturally, prominent in all his conversations with Ashima. He is equally indulgent with Gogol and Sonia, careful enough to keep them from Ashima’s strictness.

If you read the book closely, it is easy to imagine Ashoke Ganguli but once you have watched the movie, it becomes easier to see Irrfan fit into the shoes of the character just like Ashima fits the shoes of Ashoke before she sees him for the first time. The word ‘namesake’ literally refers to a person or thing that has the same name as another. In his acting, I am being bold enough to point out here, that Irrfan Khan becomes Ashoke Ganguli’s namesake. It is only through Irrfan Khan’s acting that the character of Ashoke Ganguli finds fulfillment – a totality possible only when the book and the movie are in close association with each other.