House of the Dragon (Season 1), Episode 7, Review, Recap and Ending, Explained: House of the Dragon had its massive cast shakeup in last week’s episode, “The Princess and the Queen,” with Emma D’Arcy and Olivia Cooke taking over from Milly Alcock and Emily Clarey in leads. In this week’s episode, “Driftmark,” the already visible cracks in the eponymous ‘House of the Dragon’ start tearing down the family wall. In this Westerosi version of a bottle episode, the primary players of the game gather together in one place, and all the ‘bottled’ drama just erupts.

We bid adieu to many characters through a fiery path in last week’s episode. Lyonel and Harwin Strong (the Birth father of Rhaenyra’s children) are burned alive via the vile maneuvering of Larys Strong. Laena Velaryon committed suicide where she had her dragon, Vhagar, burn her.

Now, the Targaryen-Velaryon family is all gathered to mourn the passing of Princess Laena, wife of Daemon Targaryen (Matt Smith). The death of Lord Lyonel Strong has made the position of the Hand of the King once again available for Otto. The King’s council now boasts the return of Otto Hightower (Rhys Ifans).

The already strained relationships are put under severe stress when all the members are assembled in Driftmark. Jacaerys (Leo Hart), Rhaenyra’s (Emma D’Arcy) eldest son, mourns for his biological father, Harwin. Albeit privately to his mother. After exchanges of customary pleasantries and covert looks, Rhaenyra and Daemon take a nighttime stroll by the sea. They rekindle their dalliance. The dalliance was started in the alleys of King’s Landing more than ten years ago. 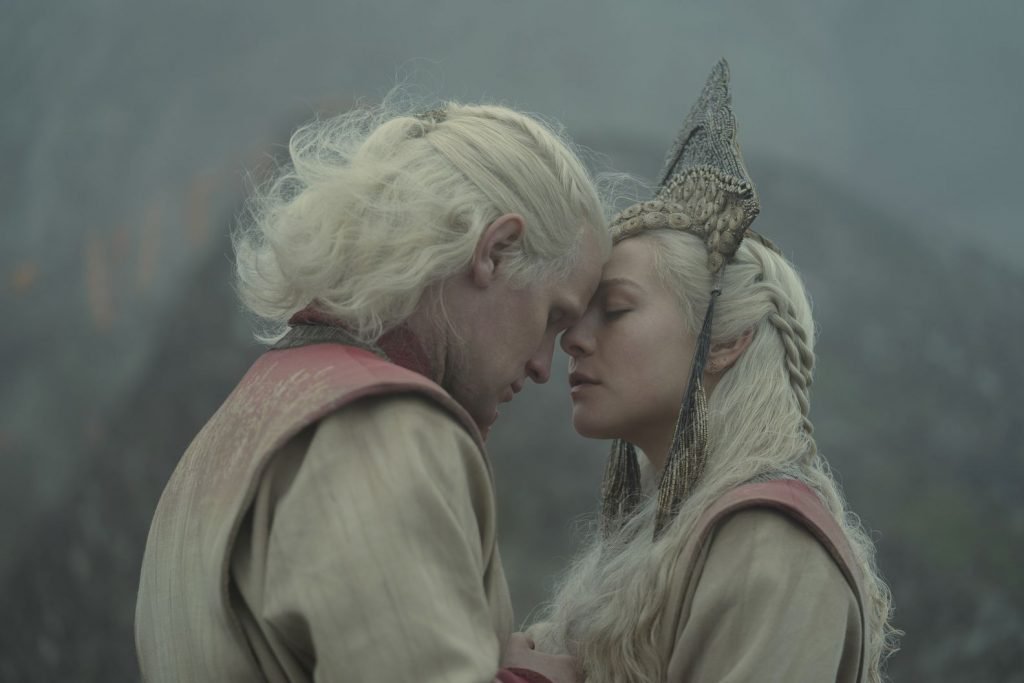 Meanwhile, Aemond (Leo Ashton), the younger son of King Viserys (Paddy Considine) and Queen Alicent (Olivia Cooke) has his eyes on a dragon. The biggest one at that. Vhagar. Often mocked for his lack of Dragon, even by his own brother, Aegon (Ty Tennant), Aemond takes drastic measures as he tries to tame and mount the gigantic Vhagar. And he tastes success. Vhagar does allow him to mount and ride her.

Laena’s daughters, positively miffed by this steal, confront Aemond and Aemond attacks them. Jacaerys and Lucerys (Harvey Sadler) join in for the girls. A fight between the three boys breaks out when Aemond calls Jacaerys and Lucerys bastards. Aemond takes a rock and prepares to injure Jacaerys fatally. That is when Lucerys swipes a knife at Aemond’s face. The knife slashes past Aemond’s left eye.

The altercation between Queen Alicent’s sons and Princess Rhaenyra’s sons calls for an immediate King’s council. The royal master passes his verdict that Aemond has lost his left eye forever, making Queen Alicent beside herself. She demands an eye from Lucerys. Jacaerys and Lucerys defend themselves by saying that Aemond had called them bastards. King Viserys asks Aemond where he has heard about this. Aemond does not say his mother’s name. Instead, he names his older brother Aegon.

Viserys announces that any person expressing doubts over the parentage of Rhaenyra’s children will be facing severe punishment. This further enrages Alicent, as she is denied the revenge she wants. Queen Alicent takes matters into her own hands, takes a knife to Rhaenyra, and slashes at her in front of everyone. She was cutting Rhaenyra’s wrist.

After all the build-up, in this seventh episode, “House of the Dragon” finally ups the ante and provides a glimpse of the fight we will see. Rhaenyra versus Alicent has never looked better. After the cast change, this episode allows the audience to see past the change that seemed a little jarring in the last episode. Emma D’Arcy and Olivia Cooke made Rhaenyra and Alicent their own in their second episode. Kudos on that.

The Rings Of Power (Season 1), Episode 6 “udun”: Recap & Ending Explained – What Place Does The Hilt Create After It Is Placed In The Hole?

The writing of this episode is similar to what a bottle episode often does in sitcoms. Locked in the exact location, passions and emotions run high amongst central characters. Both literal and metaphorical, Knives and Swords are well and truly out. Paddy Considine’s Viserys is the representation of unity among the Targaryens. The more disheveled and ill he becomes, the more fighting ensues. It does seem that his death could be the one where all hell will break loose.

Was It All Planned?

Alicent’s attack does not severely injure Rhaenyra, but it puts a stop to the argument. Later, Otto visits his daughter’s chamber just before they leave Driftmark and tells her he is proud of it. And as Aemond suggested last night during the midnight fight, the Hightower brigade has gained Vhagar. Aemond’s eye is a small price to pay for that.

Why did Laenor Velaryon have to die?

After Alicent’s outburst, Rhaenyra discusses it with Daemon. She asks Daemon to stand by her. Maybe the lovemaking has changed Daemon’s attitude; he finally relents, returning to King’s Landing and standing by Rhaenyra. Rhaenyra wants to marry him. The only way that could be achieved is if Rhaenyra’s current husband, Laenor Velaryon, dies.

The Deathly Feint of Laenor Velaryon

Daemon reaches out to Ser Qarl, the paramour of Laenor. He offers him gold and asks for a ‘quick death with a witness. Ser Qarl confronts Laenor in Driftmark’s hall. A servant boy accompanied him. A fight breaks out between Ser Qarl and Laenor; the servant runs away from the hall to fetch help. When the Velaryons finally reach the hall, they find a charred body in the fireplace, seemingly of Laenor’s.

Did Rhaenyra and Daemon Mean to Kill Laenor?

It did seem at first that Rhaenyra and Daemon hatched a plan to remove the obstacle from their path. After the Velaryons find their son’s charred body in the fireplace, Daemon and Rhaenyra marry each other. However, the last scene reveals that Laenor is not dead, as he climbs aboard a small boat with none other than Ser Qarl. They are seemingly starting their voyage across the seas.

Then the question remains whether Rhaenyra and Daemon planned the whole thing with Ser Qarl, or Ser Qarl disobeyed Daemon’s orders on his own. Although we were initially intentionally led to believe Rhaenyra could take such a step, which would have changed the Targaryen infighting dynamic, it does seem Rhaenyra never meant to kill Laenor. The words used by Daemon and Rhaenyra never explicitly state any such intention.

Daemon had asked Rhaenyra to set Laenor free, and she did that without bloodshed. Daemon was also shown to have killed a stranger just before Ser Qarl started the fake fighting with Laenor. Daemon, in all probability, provided that stranger’s deceased body to masquerade as Laenor’s charred body.