House of the Dragon (Season 1) Episode 6 Review, Recap, and Ending, Explained: This week’s “House of the Dragon” episode, the sixth of this inaugural season, named ‘The Princess and the Queen’, channels the vibe of a reboot with recasting (to play older versions) of its two leading ladies. The effect is disconcerting and demands rework to get the audience invested in those characters. However, it also helps the show to shift allegiance for some of these characters as well.

The Princess and the Queen

Ten years have passed since Ser Criston Cole (Fabien Frankel) pulled a Joffrey Baratheon on someone, named Joffrey. After his massacre of the paramour of Laenor Velaryon (John Macmillan from this episode), he seems to have evaded major punishment. Probably thanks to his new friend, the Queen, Alicent Hightower (Olivia Cooke taking over Emily Carey). The day starts with Princess Rhaenyra (Emma D’Arcy accepting the baton from Milly Alcock), mother of two boys, delivering another baby.

Rhaenyra, and her husband, Laenor, are immediately summoned by the Queen to present the newborn to her. For the already fatigued Rhaenyra, the tiring journey to the queen’s chamber which includes climbing quite a number of stairs was both a slight and an indication of the Queen’s growing animosity towards her. The Queen receives Rhaenyra seemingly warmly. Her true intention gets quickly revealed as she takes a look at the newly born babe’s hair.

The reason for Alicent’s inquiry about Rhaenyra’s child’s hair is simple enough. None of Rhanyra’s children, including the one-day-old, has the traditional Targaryen-Velaryon silver hair. This has sparked a growingly discomforting rumor of all Rhaenyra’s children being bastards. That their true father is Harwin Strong (Ryan Corr), the current commander of the city watch, and the eldest son of Lord Lyonel Strong (Gavin Spokes), the Hand of the King.

Rhaenyra’s two boys, Jacaerys and Lucerys are quite friendly with Alicent and King Viserys’ (Yes, he is alive and still played by Paddy Considine) boys, Aegon and Aemond. Something that is irking Alicent a lot. Rhaenyra, in the small council, extends an olive branch in form of a marriage proposal between Jacaerys and Princess Helaena, daughter of Alicent and Viserys. It delights Viserys, who would want nothing else than the two feuding factions becoming united. However, Alicent remains reticent. 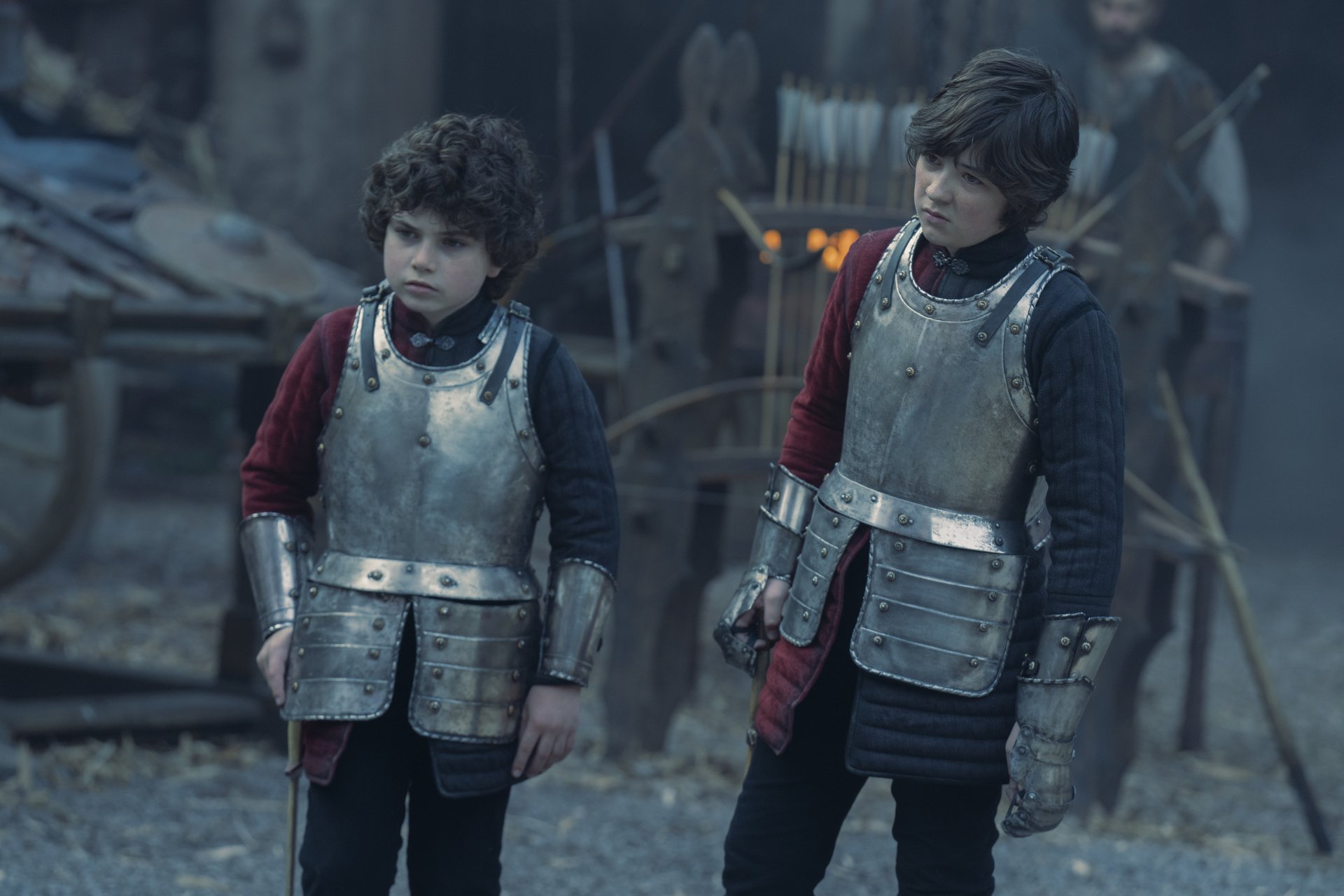 As hinted in the last episode, Daemon (Matt Smtih) has indeed married Laena Velaryon (Nanna Blondell). Sister of Laenor Velaryon. However, they have left Westeros and live in Pentos with their two daughters, Baela and Rhaena. Laena is once again pregnant when the Pentos lord offers Daemon lordship of Pentos, in exchange for his support and dragons to help Pentos from the threat of Triarchy, who are once again rising their heads since the Crabfeeder episode.

Laena longs to go back to Westeros. He asks Daemon for the same. Daemon, however, is a changed man, at least on the outside. He spends more time in the library than on battlefields or wineries.

The time jumps are starting to become too strong now. This episode in particular, which included recasting as well, seems separated from the previous five episodes. It is almost like a reboot. At least it felt like that in the beginning. The cast change, especially which of the two leading ladies, Rhaenyra and Alicent, does create a jarring effect that would take some time to get used to. Luckily for them, they still have Paddy Considine’s Viserys and his ever-increasing miniature kingdom to smoothen that path.

And then there are dragons. HBO, at this stage, is flaunting their budget with ‘House of the Dragon’, and we do not mind that. The top-notch CGI work, under the exciting direction of Miguel Sapochnik, creates another set of memorable scenes with the majestic beasts that this show has dedicated its title to.

The show itself is moving at dragon-riding speed. Creator Ryan J. Condal, and Sara Hess (for this episode), are using these time jumps to create a tableau of events that precede the fall of the Targaryen dynasty. “House of the Dragon” has always marked itself different from Game of Thrones in that regard. They are also helped by the cast change to switch the audience’s allegiance to some of the characters (read Queen Alicent). 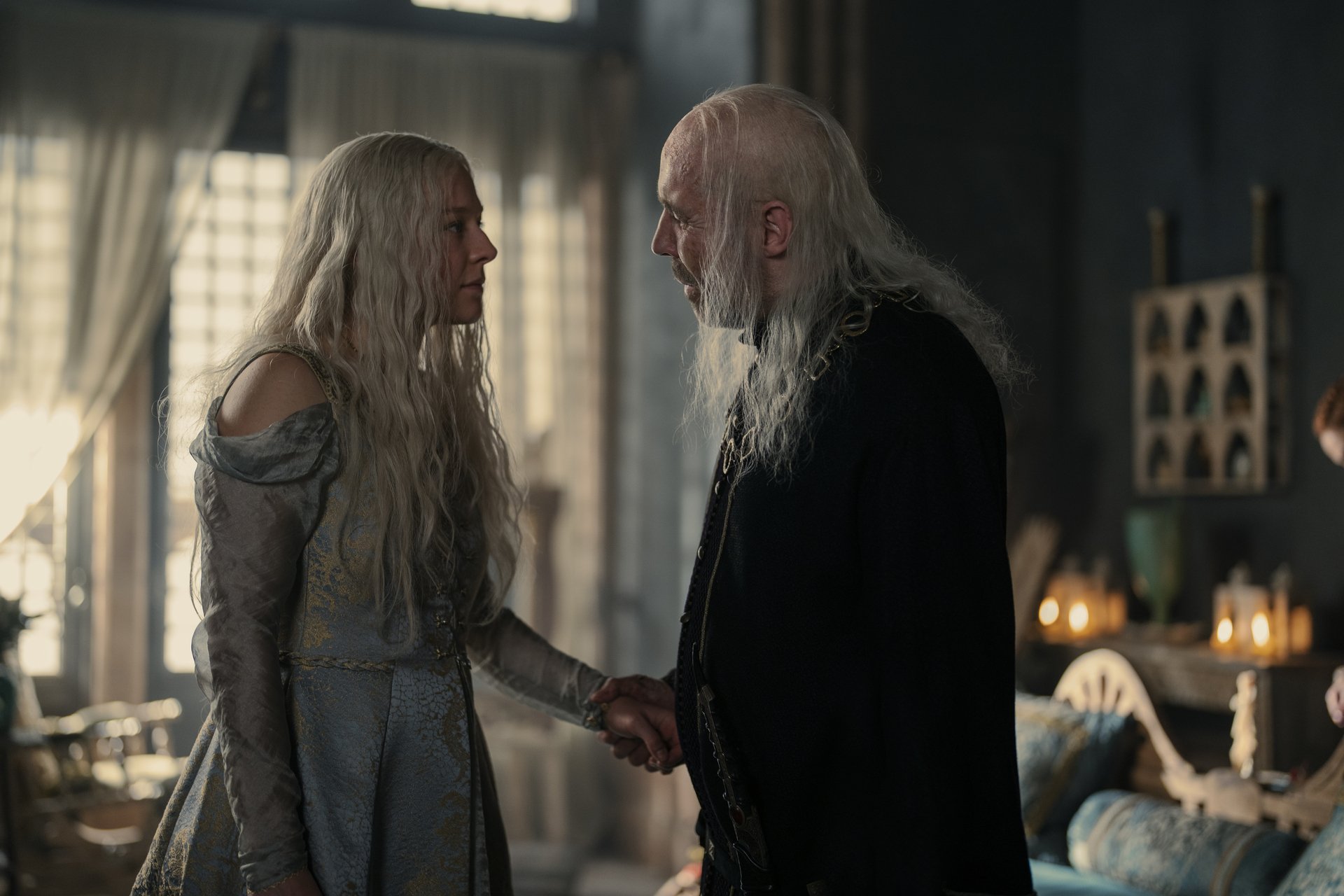 This episode started with Rhanyra’s successful childbirth, but a similar result does not happen for Lady Laena. She loses her baby and in the trauma of that, goes towards her dragon, Vhagar, and orders her to kill her. Vhagar looks confused as Dragons do not hurt their masters. But Laena’s repeated orders do the trick. Daemon could not reach there in time as Vhagar burned Laena alive. This death could force Daemon to go back to Westeros again.

The fight between Harwin and Criston frightens Rhaenyra. As it does Lord Lyonel. Lyonel seeks counsel from Viserys to resign from his position of the hand. Harwin’s action has all but confirmed the true parentage of Princes Jacaerys and Lucerys. The relationship between Harwin and Rhaenyra has started to become an open secret. However, Viserys refuses to see it. Viserys refuses to accept Lyonel’s resignation either.

Lyonel decides to send Harwin away anyway. To Harrenhal, the birth seat of House Strong. As he prepares to accompany Harwin to Harrenhal for his journey, Rhaenyra also decides to leave King’s Landing. She fears for her and her children’s safety once Harwin is sent away. Her relationship with Laenor is still an open marriage as it was proposed ten years ago. However, Laenor, for the safety of everyone, agrees to leave King’s Landing with Rhaenyra. To continue the façade of their marriage and parenthood.

Queen Alicent is deeply infuriated by Viserys’ continuous refusal to see the truth about Rhaenyra and Harwin. Viserys’ refusal to accept Lord Strong’s resignation further enrages her, as she wanted her father, Otto Hightower, back as the Hand. She confides this to her ally, Larys Strong, the second son of Lord Lyonel Strong and brother of Harwin.

Larys has a connection with King’s Landing criminals who are sentenced to die. He has the power to release them. In turn, they would have to do one thing for him. Kill Lyonel and Harwin Strong. As the criminals, whose tongues are also cut by Larys, sets Harrenhal castle on fire, thus burning Lyonel and Harwin alive; Queen Alicent also realizes that she has bitten more than she could chew with the unpredictably cruel and malicious Larys Strong.

8 Films to Watch If You like 'Blonde' on Netflix