House of the Dragon (Season 1) Episode 5, Review, Recap, and Ending, Explained: We have our first Westerosi wedding in ‘House of the Dragon’. Let’s just say the HBO series maintains the wedding customs set by its predecessor, ‘Game of Thrones’. Last week’s episode was all about tantalizing possibilities. This week’s one, titled ‘We Light the Way’ does light the avenues the show would be taking among the aforementioned possibilities. As we reach the midpoint of the season, where we would bid the younger versions of many characters adieu, ‘House of the Dragon’ heralds the bloody path of politics that would, in all probability, start taking many lives. Things we had signed up for.

So, we finally get to see the much talked about and much-maligned by Daemon (Matt Smith), Lady Rhea of Vale. The wife of Daemon Targaryen. Her first appearance, galloping on top of her horse through the valleys of Vale, quickly becomes her last as well; as she is greeted by Daemon in his hooded cloak avatar. The appearance we saw him take last episode as well, to sneak into the alleys of King’s Landing under the night sky. After a brief exchange, Daemon forces Lady Rhea’s horse to throw its mounted rider off. Then he, goaded by his dying wife, finishes the job.

Preparation for the Velaryon-Targaryen Union:

The King, on the other hand, charters through the sea to visit Driftmark, the seat of the House of Velaryon. He is greeted mutedly by Lord Corlys (Steve Toussaint) and his lady wife, the King’s cousin, Princess Rhaenys Targaryen (Eve Best). Viserys overlooks the attitude and comes straight to the point of asking the hand of the Velaryon heir, Laenor (Theo Nate), for Princess Rhaenyra.

Meanwhile, Rhaenyra has a chat with her soon-to-be husband Laenor. Laenor prefers the company of men to that of women. His paramour is Ser Joffrey Lonmouth (Solly McLeod). Rhaenyra seems to be aware of Laenor’s orientation, as she proposes an open marriage to him. They would only be performing their duties towards the realm by the marriage and would still be free to pursue their own interests. 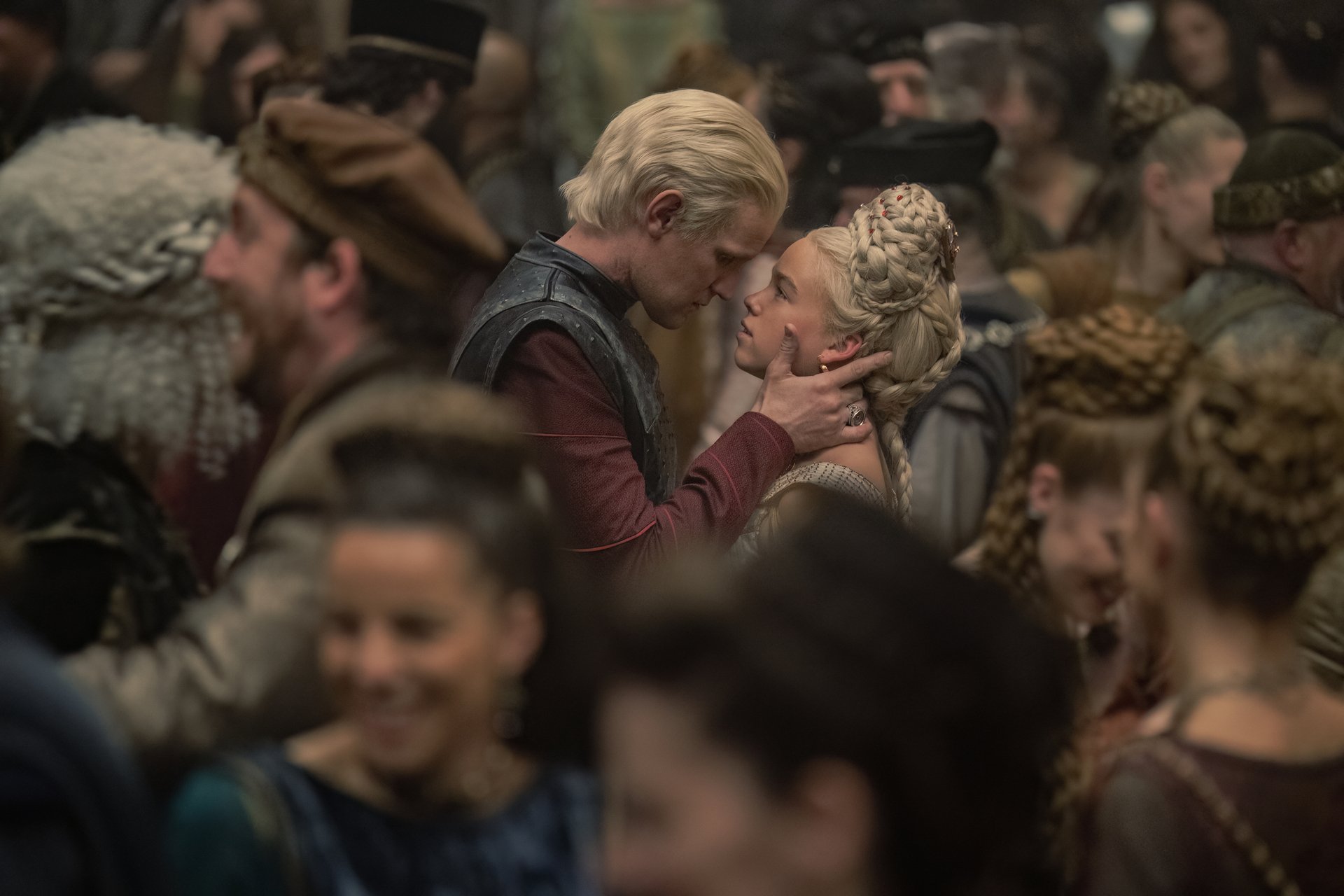 Rhaenyra informs the same to Ser Criston Cole (Fabien Frankel), her sworn protector to whom she lost virginity to in the last episode. Ser Criston asks Rhaenyra to leave the realm and just venture into the free cities. To see the world together and be married where they would not be divided by royalty and duty. Rhaenyra refuses to leave her crown though. This deeply offends Ser Criston.

Queen Alicent calls for Ser Criston Cole when the Targaryen fleet returns from Driftmark. Although she wanted to check with Ser Criston about the coupling between Rhaenyra and Daemon, the supposed misinformation for which her father lost the position of the hand, she gets a different piece of information. Ser Criston confesses to having sex with Rhaenyra, without realizing Alicent was referring to Daemon and Rhaenyra’s tryst. This significantly changes Alicent’s attitude towards Rhaenyra.

The wedding festivities are kicked off by King Viserys and his council. The Velaryon brigade arrives and everyone welcomes them. Everyone except the Queen. Even Daemon joins in the celebration. Alicent arrives late, in the middle of Viserys’ speech, in a green dress. The Velaryon brigade consists of Ser Joffrey, who wastes no time to reach out to Ser Criston. Ser Joffrey lets Ser Criston know that he is aware of Criston being the ‘secret’ of Princess Rhaenyra and he introduces himself as the ‘secret’ of Laenor.

During the dancing, a sudden melee breaks out. People start to jostle and clash with each other. The main source of the melee seems to be Criston and Joffrey. As everyone starts to scarper, it becomes clear that Criston has attacked Joffrey. Criston’s relentless and brutal punches kill Joffrey.

With this episode, ‘House of the Dragon’ reaches its mid-point. Milly Alcock and Emily Carey will hand over the baton to Emma D’Arcy and Olivia Cooke after a job fantastically done. Milly Alcock especially made the character Rhaenyra as her own. Her sure-footed performance reflected both the strength and innocence of young Rhaenyra. Emily Carey, especially in the later part of the first half, began to show what Queen Alicent is going to be.

Just like most weddings in ‘Game of Thrones’, ‘HotD’ was able to perfectly capture the chaos and madness that comes with it. Kudos to director Clare Kilner. The script, although a little deviated from the book, sets up the next half of the season with great expectation and anticipation. 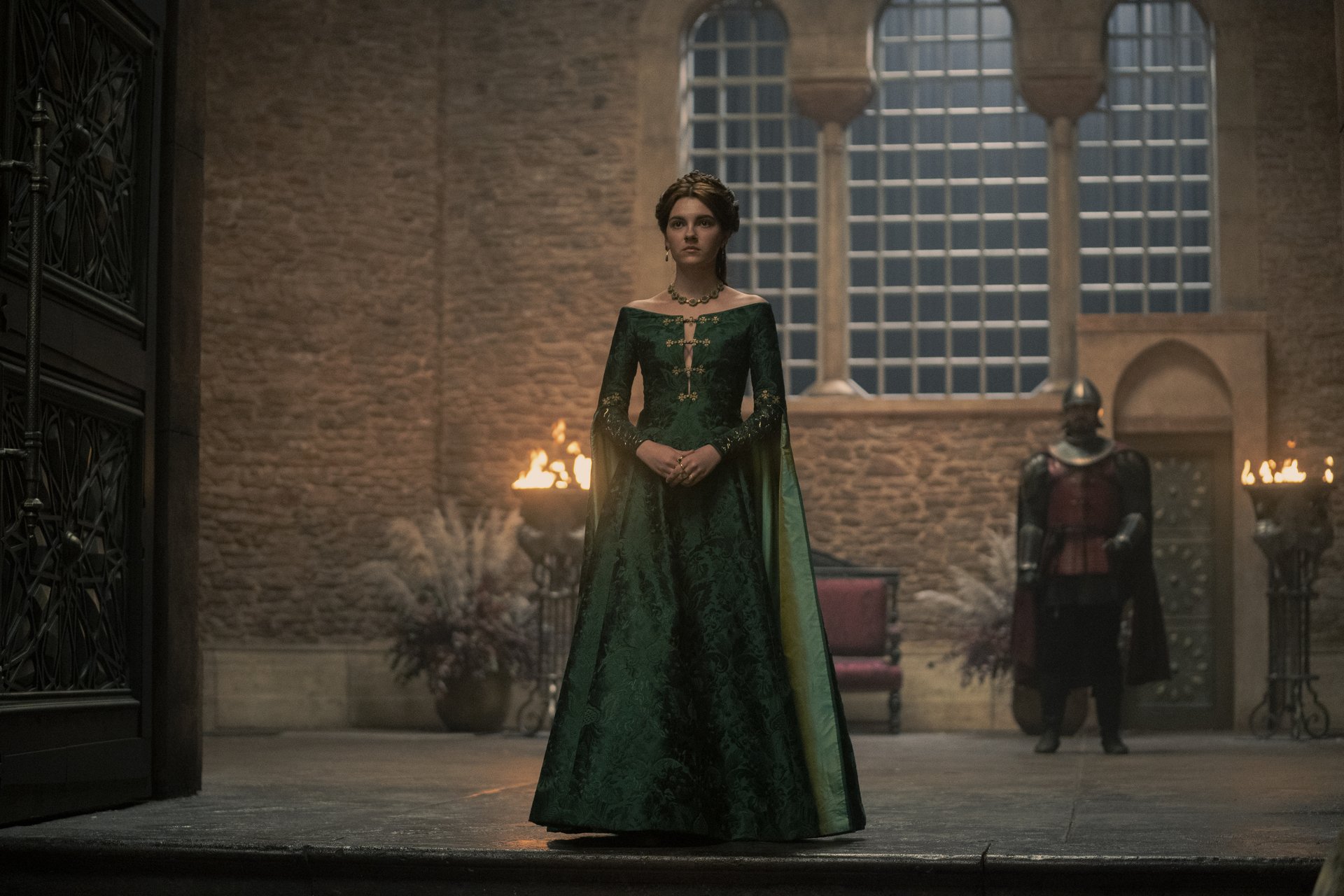 The Madness of Ser Criston

So, years before the event of ‘Game of Thrones’, it seems we had another wedding that ended with someone named Joffrey being dead. It is not that difficult to understand why Ser Criston went all medieval on Ser Joffrey. Simply put, he lost it. Ser Criston seemed to be genuinely in love with Rhaenyra. However, Rhaenyra did not seem to reciprocate the same. At least not as much as to leave the throne for it.

This left Ser Criston to question the “Why” of it. Why did he break his vows as kings guard? He did for what he read as love. Marriage seemed to be only noble thing that would have compensated for his breaking of a vow. Since Rhaenyra took that away and Ser Joffrey paraded to him about being ‘paramours’ to the ones getting wed, he found the only feasible person to take his frustration out on in poor Joffrey. A sentence no ‘GoT’ fans expected to say.

It was not Ser Criston alone who felt betrayed by Rhaenyra in this episode. Alicent, who vouched for Rhaenyra in the last episode, was shocked to find that Rhaenyra has lied to her about remaining virgin. Which in turn would make her question the punishment her father had faced for suggesting the same. Presumably, this changes Queen Alicent, who has so far been an ally to Rhaenyra.

Her attending the wedding in all green is a signal of civil war. As green is the color of the declaration of war in house Hightower. Alicent also stops Ser Criston from committing suicide. Ser Criston, no doubt distraught from everything he did, tried to stab himself to death. Alicent seems to have taken Ser Criston under her wings. It would be intriguing to see Ser Criston switch his allegiance.

As the distraught and crying (in the case of Laenor) bride and groom finish the wedding rituals without any glitz, King Viserys collapses to the ground. To the question of whether he dies or not, the short and blunt answer would be no. Viserys has shown to collapse due to his ‘greyscale’ disease. The climactic collapse seems to be of the same nature.

Where to watch House of the Dragon