House of the Dragon (Season 1) Episode 4, Review, Recap, and Ending, Explained: After the action-filled sequence where Daemon Targaryen’s blood-soaked victorious figure stood tall to close the last episode, ‘House of the Dragon’ takes a breather in this fourth episode titled ‘King of the Narrow Sea’. A name that alludes to Daemon. This episode navigates through the kingdom’s politics and how desires can become folly in those scenarios. The episode has fewer actions per se but is fraught with tantalizing possibilities.

The fourth episode starts with Princess Rhaenyra (Milly Alcock) sitting at the hall of Storm’s end (the ancestral seat of House Baratheon), sifting a selection of men. Of both the tender and advanced ages. She has been sent by her father, King Viserys (Paddy Considine), to find a suitable match for her and her house. Evidence suggests that it has been more than a year since Daemon’s (Matt Smith) demolition of the Crabfeeder. Rhaenyra ends her journey of scouting and procuring a husband prematurely and decides to return to King’s Landing.

Daemon, stylized as ‘King of the Narrow Sea’ for his feats against Crabfeeder and the Triarchy, returns to his brother’s court. He immediately renounces his own kingship and pledges fealty to Viserys. Viserys embraces his brother in a Targaryen reunion. She returns just in time to see the return of another Targaryen. The time has also mended the relationship between Rhaenyra and her friend, the Queen, Alicent (Emily Carey). The patriarchal confinement of royalty seems to have repaired the previously sweet-turned-sour friendship. 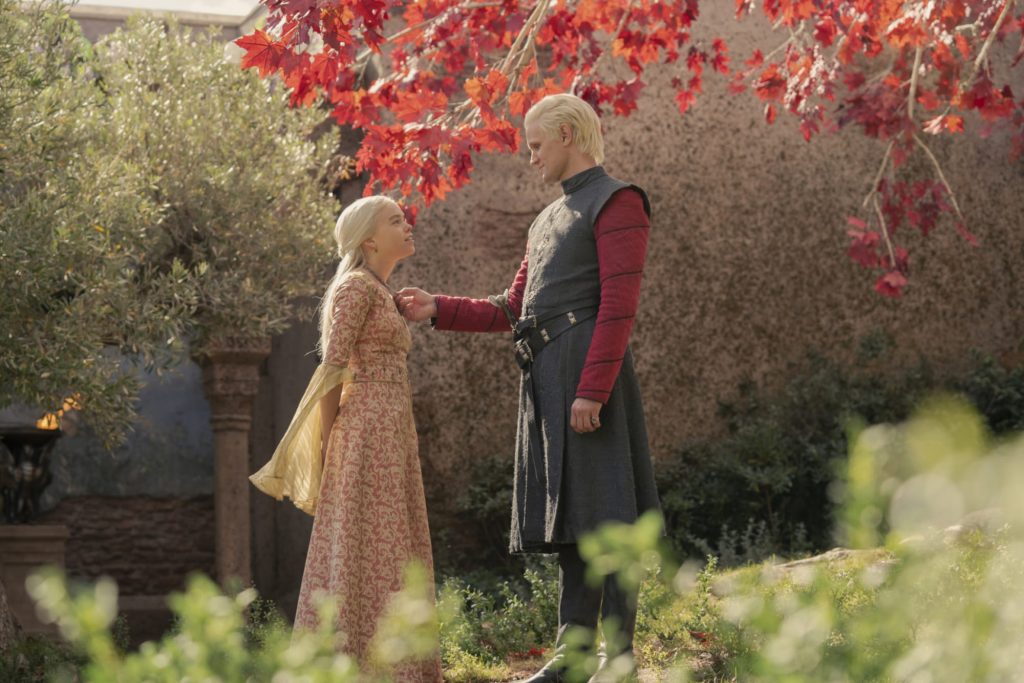 It has been hinted before and anticipated, with House Targaryen being famous for incest; the romantic entanglement between Daemon and his niece, Rhaenyra, starts to take shape. Daemon takes Rhaenyra through the King’s Landing alleys under the moonlight. Rhaenyra imbibes in the nightly fervor of the city. With Daemon by her side, she witnesses a street performance dabbling in street food and then visits the local brothel.

What started with fun and frolic ends with fornication. Daemon impresses upon Rhaenyra to take whatever her heart desires. Marital duty should not be a hindrance, according to him. Taken in by the enthusiasm, Rhaenyra and Daemon surrender to each other’s arms. However, Daemon hesitates after a while and does not proceed further than kissing. He leaves the pleasure house, abandoning Rhaenyra to find a way home.

THE LORD OF THE RINGS: THE RINGS OF POWER (SEASON 1), EPISODES 3: RECAP & ENDING EXPLAINED

Rhaenyra is in no mood to relinquish the freedom she feels on this night. She creeps inside the palace, hoping to be unseen by any other than Ser Criston Cole (Fabien Frankel), who is standing guard at her door. Rhaenyra takes Ser Criston inside and starts to disrobe him. After a bit of protest, Ser Criston yields and begins helping Rhaenyra take his armor off. The love-making between Criston Cole and Rhaenyra stands out in contrast, with Viserys having sex with Queen Alicent while there is zilch passion involved.

The Aftermath in the Morning

Rhaenyra’s hope of going unseen soon gets ended. Mysaria (Sonoya Mizuno), Daemon’s former paramour, is now a master of whisperers in King’s Landing. One of her spies spots Rhaenyra with her uncle in the pleasure house and informs Otto Hightower (Rhys Ifans), the hand of the King. Otto wastes no time in delivering the same news to King Viserys. Unbeknownst to Otto, his daughter and the Queen, Alicent, overhears that. Alicent lets Rhaenyra know that she has been seen. Rhaenyra vehemently denies having any sexual actions with Daemon. She promises Alicent that she has not been ‘sullied’ or lost virginity.

With its fourth episode, ‘House of the Dragon’ explores the realm’s human fallacies and political intricacies. Westeros has not been a kind place to powerful men and women when they choose to follow their hearts. The memory of Robb Stark is still etched on many fans’ minds. Viewers would be reminded of grotesque results in ‘Game of Thrones’ that are caused by simple actions of people who followed their hearts. ‘King of the Narrow Sea’ has set the possibilities of that in motion.

‘House of the Dragon’ has been quite fast in its storytelling. Time jumps of a year or more have become customary now, it seems. As mentioned in the last episode’s review, traversal befits the show this time. It has been able to paint a significantly astute picture of King Viserys’ realm. Matt Smith and Milly Alcock show real chemistry, and it does not appear unnatural to see them ‘couple’. Paddy Considine has been terrific as the always-conflicted king Viserys. He is starting to show his inner dragon gradually. Emily Carey also gets the chance to shine in this episode.

After learning about the accusations of the said coupling between his daughter and his brother, Viserys calls Daemon to his court. Alone. A visibly hungover Daemon does not refute the allegations. On the contrary, he asks for Rhaenyra’s hand in marriage. Targaryen customs do allow that. However, Viserys reminds Daemon of his lawful wife in Vale. And once again, he banishes Daemon to Vale and asks him to remain out of his sight.

Viserys Takes Matter into His Own Hands

Banishing Daemon is not the only kingly activity Viserys does. He calls for Rhaenyra and reminds her of her duties towards the kingdom and towards the House. Once again, Viserys mentions the prophecy of ‘A song of ice and fire.’ He reminds Rhaenyra that the fate of humanity is more important than any desires she might harbor. The King takes the time and option to choose from Rhaenyra and decides she will marry Laenor Velaryon. To mend the weakened relationship between the two Dragon houses.

Rhaenyra relents to the decision. However, she asks Viserys to see through Otto’s intentions of putting spies on her. Viserys has already doubted Otto’s intentions. It has started to become transparent to him that the hand of the king wants his own grandson to be named heir. Viserys strips Otto of his role as the second most powerful man in the realm.

Viserys also sends a herbal tea to Rhaenyra that night. The tea would rid of any unwanted complications, meaning it would act as a birth control contraceptive measure. Clearly indicating that despite Rhaenyra’s claim of not having sex (which is not true), Viserys does not believe her and believes that Daemon and Rhaenyra have been engaged in sexual activities, as only Rhaenyra and Cole know about their own encounter.

Where to watch House of the Dragon (Season 1) Episode 4