In a scene in Kashmir Files, Radhika Menon, a faculty of ANU college, is making a speech to a group of students about how India illegally occupies Kashmir. At the end of the speech, the professor chants Azadi to ‘Manuvaad’ and ‘Sanghvaad’. The students join in on the chants, and the background music builds up to give an impression of impending doom. The students chant Azadi slogans and then neatly segue into the slogans of “Bharat tere tukde honge.” The background music reaches a crescendo, and it cuts to another scene. The scene described above represents how the movie Kashmir Files constructs a homogenized group of enemies out of political actors who have often varied and even conflicting interests. The director tacitly suggests through the scene that anyone who calls for “Azadi” is a terrorist/terrorist sympathizer. In another scene, the director explicitly says so through the character of Brahma Dutt. The move is not interested in the nuanced fact that the Azadi slogans were even used in the 1990s as a chant against patriarchy and that it has evolved over the years to represent a chant against any form systemic of oppression.

The movie also coalesces all the Muslims in Kashmir as terrorists, terrorist sympathizers, or lustful mullahs. Islamist fundamentalists played a significant role in the ethnic cleansing of Kashmiri Pandits in the valley. However, it is highly improbable for all the Muslims in the valley to have supported the exodus. The movie does not even portray a Muslim character that is ambiguous about his moral standing or who does not speak out due to the fear of repercussion.

The movie also cleverly portrays various groups, i.e., Muslims, terrorists, academics, and international media, as homogenized entities working against India’s interests. The film establishes this fictional cabal by showing that Radhika Menon has a close connection with Bitta and in another scene in which a character tells Krishna Pandit how the international media, along with the Kashmiri separatists, uses paid actors to show India in a negative light. Thus, the movie expertly weaves together a bogeyman that the target audience can hate.

The movie can be interpreted as a warning to all Hindus against the dangers of the ‘other’. However, I believe the movie’s target audience is those Hindus whose ideologies may not have still crystallized and identities formed. Krishna Pandit represents this Hindu. Krishna Pandit is portrayed in the movie as a naïve young man with no sense of identity. The movie also intelligently raises certain liberal viewpoints (or viewpoints which are often attributed to the ill-defined categories of Liberals and Leftists) through the characters of Radhika Menon and Abdul to be forcefully refuted by other characters or scenes. For example, Radhika Menon’s mention of mass graves in Kashmir is immediately “refuted” by the question of the graves of Kashmiri Pandits. In another scene, the question of minorities taking up arms against state oppression is “refuted” by arguing that Kashmiri Pandits never took up arms. These scenes seem to be a way for the movie to answer the doubts and questions that may be in the mind of the target audience. 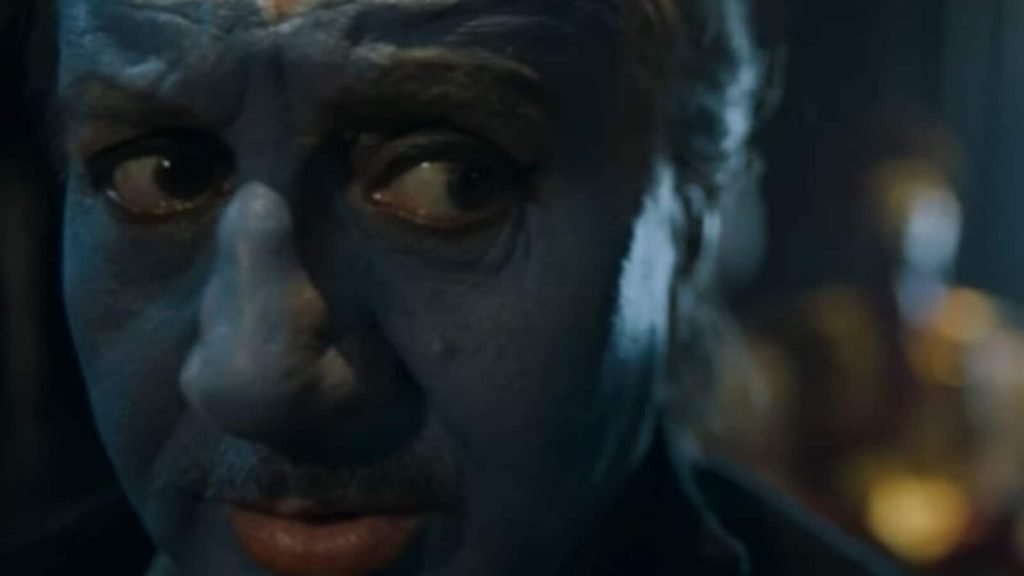 The movie also serves to warn the target audience about the dangers of taking the ‘middle position’ through the gruesome death of the poet and his son, who had amicable relations with the Muslim community. The movie also pushes the target audience to see the attack as one on the whole Hindu Community. It uses certain religious symbols to convey this idea. Pushkar Nath’s three friends are named after the Trimurtis. Sharda is another name for the Goddess Saraswathi. The movie shows Sharda being stripped and sawed in half by the terrorist. The movie’s hero is named ‘Krishna.’ However, the movie portrays him as the confused ‘Arjuna’ in the Mahabharata. In one scene, Bitta Karat tells Krishna Pandit that “Your name is Krishna, but you look like Arjuna”. The movie also shows Pushkar Naths with his face colored like Shiva. The scene where Sharda is forced to eat the blood-soaked rice is shot with the Shiva-face-colored Pushkar Nath crying in the background. Thus, the movie uses the pantheon of Hindu Gods to convey that the attack was not merely an attack on Kashmiri Pandit but the Hindu religion.

It is also important to ask whose message the movie is carrying. The movie intentionally or unintentionally aligns with the ideology of the current government. The movie creates enemies out of the groups which have tried to question the current government. It paints all these groups with the same brush and classifies them as Anti-National. It twists history to blame the Rajiv Gandhi government for the exodus of Kashmiri Pandits. It also ties up the abolition of Article 370 to the issue of the exodus of Kashmiri Pandits. It uses Pushkar Nath’s character to mislead the viewers to think that the abolition of Art. 370 was a long-standing demand of Kashmiri Pandits. The movie also justifies the current government’s erasure of the Kashmiri mainstream political parties by showing that the ruling party in Kashmir was in cohorts with the terrorists. Thus, the movie effectively aligns with the grand narrative parroted by the RSS and the current government that the Hindus in the country are under attack from all sides by anti-national forces, and they are the only ones standing between them and the destruction of the Hindu race.

The exodus of Kashmiri Pandits was a tragic chapter in the annals of Indian History. However, the movie does a disservice to the story of Kashmiri Pandits by creating a movie that narrates the tragedy using half-truths and lies. The movie seems to be an effort to paint groups that oppose the current dispensation as anti-Hindu/ anti-national (they are considered the same nowadays). The Kashmiri Pandits story seems like a mere vehicle used by the Director to attack and foster hatred against these groups. The Director’s first movie was titled, Hate Story. However, his latest film The Kashmir Files is more deserving of that title.

The Kashmir Files: Does Loud Propaganda Negate An Unfortunate Incident in History?
KKK Files: How “Birth of a Nation” Deepened The Already Existing Hate

I am a lawyer by profession. However, I fell in love with movies due to our family ritual of seeing at least one movie in theatres every week. I am a sucker for movies where the character undergoes an internal struggle.