45 years (2015) appears to be a simplistic marital drama but at its core, it is a complex character study. There are two central characters, Kate (Charlotte Rampling) and Geoff (Tom Courtenay), an old couple, married for 45 years. On one of their regular Monday mornings, a piece of news comes in form of a letter that the folks in Switzerland have found the body of Katya. Katya was Geoff’s love interest before he married Kate. She died after a fall in the Swiss Alps, some 50 years ago and her body was never found. But now that the letter has revived the memories of Katya in Geoff’s head, will it affect his life with Kate?

In 45 Years (2015), it is brilliantly displayed that how a long-lost memory can shake a relationship to its core. It all began the very day the letter arrived and Geoff said, “I remember I told you about MY Katya.” Kate didn’t like the sound of it but she ignored it, after all, it was a 50-year-old affair that happened even before she married him. Geoff added, “She’s has been there over 50 years, like something in the freezer” as if talking about his memories and not the Swiss Alps.

What follows is a series of incidents that influence Kate to believe how every little thing she knows about Geoff or the ways they have in their marriage is in one way or the other associated with his relationship with Katya. She is fairly insecure about it and even if it does look unnecessary pondering at first, the way Geoff has a temperamental shift after the letter arrived, you will see reasons enough for Kate to be contemplative about Katya and Geoff. Geoff’s sudden change of behavior was almost like he was having an extramarital affair with his memories of Katya.

45 years (2015) is a story told between a particular Monday and Saturday. As one after another day passes, Kate’s insecurity grows as she keeps discovering things that only make it worse. The way things unveil over time, it appears that Geoff had never really shared most of his pre-marital memories with Kate. Now suddenly, him acting differently is making Kate uncomfortable, insecure, and somewhat disappointed.

Charlotte Rampling as Kate is absolutely terrific here; in every conversation about Katya, Charlotte comes up with subtle expressions that convey more emotions than there are notable movements in her face. The film explores the waves of emotions Kate is going through as a result of the behavioral change in Geoff. There are times when you will notice how even after the most awkward revelations about Katya and Geoff, Kate continues to care for him, thus indicating stability in a relationship, that possibly comes with time.

Even when there are moments when their marriage looks on the verge of collapse, they pull it back to a point where it looks fairly stable. At the same time, they have a 45th Wedding Anniversary coming on Saturday but the events that unfold throughout the week loosens the bond between the old couple and raises the very question that is time, really, a factor to define strength in a relationship? 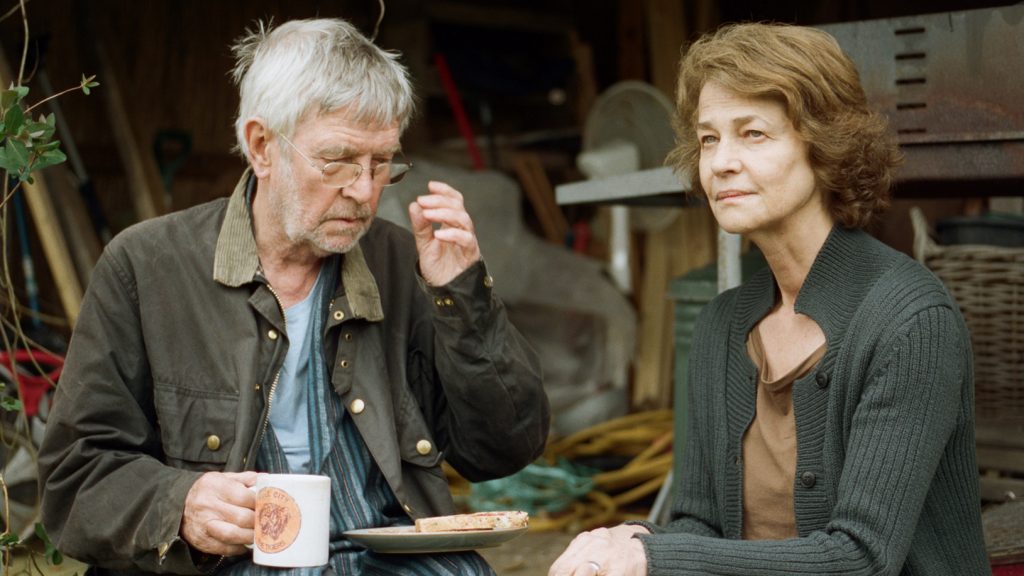 British filmmaker Andrew Haigh’s 45 Years (2015) follows a long-married couple – Geoff and Kate – for over a week, during which their inviolable relationship gradually fractures due to the arrival of a letter, containing facts about Geoff’s long-dead former sweetheart, Katya. It is a very simple premise and for some, the couple’s flow of life and existential dilemmas may seem boring. But, Haigh’s sensitive narration and astoundingly subtle performances from Charlotte Rampling & Tom Courtenay provided me a powerful and meaningful movie experience.

The old couples live in their affluent countryside house. They are financially solid and have gained friends who care. However, the writer/director hasn’t approached the subject so as to coerce us to think: ‘just problems of upper-middle-class white people. Through Geoff and Kate, we could relate to how many people have this propensity to visit their invigorating past memories and equate them with their present, mundane existence. Not every moment in 45 Years (2015) withhold high drama. The plot moves more or less like ripples spreading out when a single pebble is dropped, but with every little truth and simple confession, we could feel Geoff & Kate’s pain.

Director Haigh sets up an atmosphere and presents elusive symbols that give us the feeling of a haunted house drama. The hallway door gradually closes; Kate comments about ‘smelling Katya’s perfume around the house’; a hidden memory stays in the attic and possesses & breaks Kate’s placid mindset. These metaphorical Zen frames about ‘ghosts of the past’ (or ‘skeletons in the closet’) perfectly show how the aura of a long-dead person is creating turbulence in the minds of the couples.

If there is one on-the-face metaphor, then it is the supposition that the beloved’s corpse is perfectly preserved in glacial ice, but it is a minor flaw in what is otherwise a perceptive cinema. 45 Years (2015) has some wonderful dialogues, although it heavily relies on the subtle emotions of the central actors. Rampling with her severe face, masking vulnerability, and Courtenay with his disappointed stature wondrously convey marital longevity and the devastating realities of old age. And, that final closeup shot indicates how performance could convey emotional complexity without a single line of dialogue.