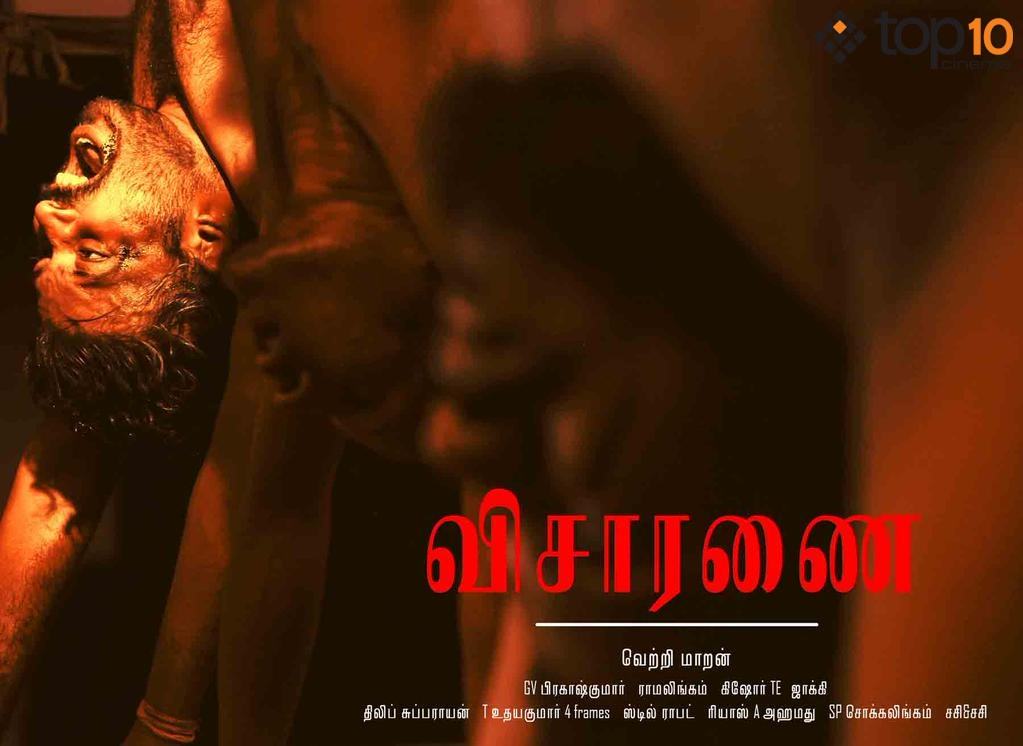 Director Vetrimaran in his interview to ‘Hindu’ says “A film should enrich me as well as the audience. It should allow me to grow as a person”. It is a rare quality for an Indian or Tamil film-maker, where cinema in the name of entertainment doesn’t allow to portray the truthfulness of human emotions. With his Chennai-based bike-theft story “Polladhavan” (2007) and Madurai-based rooster fighting story “Aadukalam” (2011), Vetrimaran entertained the audience as well as allowed them to identify with the characters. In that limited commercial format, he provided great emotional catharsis for the viewers. Now, with “Visaranai” (aka ‘Interrogation’) he masters the balance between the so-called ‘mainstream’ and ‘highbrow’ to offer a stupendous, thrilling examination about the pawns of the ‘system’. “Visaranai” offers the kind of experience that keeps our senses sharp and elegantly passes on the emotional bruises of the characters to us. The film is partly based on Mr. Chandrakumar’s novel ‘Lockup’, which chronicles the author’s real life experience with police brutality.

As little children, we might have been taught that police & courts are instilled by the ‘system’ to be guardians for common citizen from the greed, lust, paranoia and prejudices of few menacing people. As adults, we hear and experience things that may even make us believe in fairy tales, but not in that instructed statement. Yeah, we might be said that it is this ‘democratic system’ or a full-blown totalitarian arrangement. So, is it the individuals with borderline-psycho compulsions, enjoying the powers of the ‘system’ corrupting it? Or is the other way around? Why are there dragnet political ideals that insist on vigorous take-down of the innocents rather than the capture of criminals? Why do media, at times become a lip service for the ‘system’ than use up its prerogative suit? In the end, we also console ourselves, showing pity at the innocent victims, instead of getting infuriated at this putrefied ‘system’. “Visaranai” seamlessly instill these questions and also imbues that righteous fury within us, but it does so by avoiding blatant emotional outbursts and by staying away from the path most Tamil/Indian film-makers take: to preach. 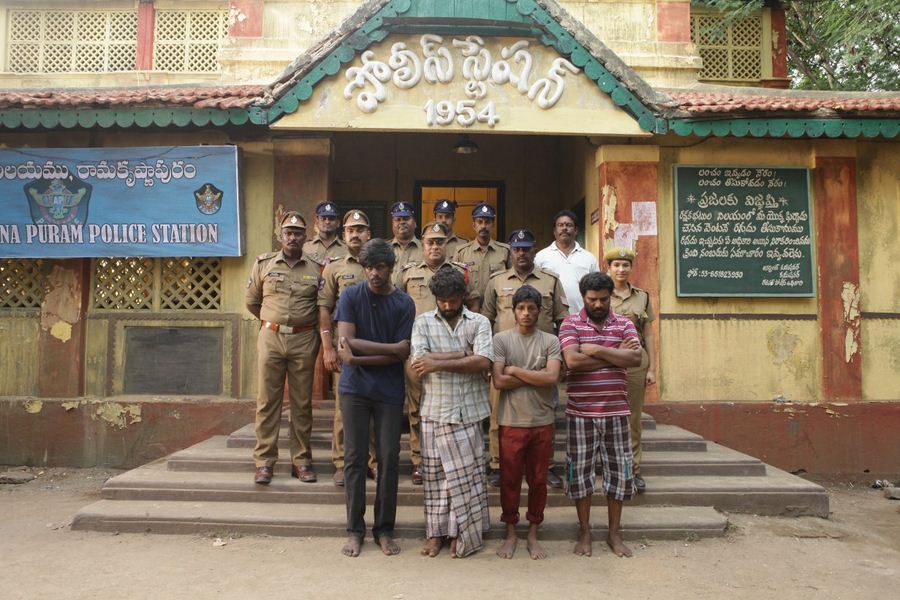 In the first-half of film, the narrative revolves around four young homeless, downtrodden Tamil laborers working at Guntur, Andhra Pradesh. The foremost of the four characters is Pandi (Dhinesh), who works at a small provision store. All the four men get arrested by Andhra Police and undergo brutal torture to accept crimes they don’t even know about. As a higher police official says to the local inspector “I asked you to finish the case. Did I ask you catch the accused?” After experiencing days of torture, the four men agree to confess in the courts. On a parallel track, an honest cop Muthuvel (Samuthirakani) from Tamil Nadu arrives at Guntur to apprehend a corrupt auditor (Kishore), who if gets surrendered in Andhra court, may bring troubles to TN police and political VIPs. In an interesting turn of events, the lives of three men interconnect at a point, where they all gaze into the devilish eyes of a corrupted system.

Of the three works by Vetrimaran, “Visaranai” boasts the robust script. There’s an indication of a redundant romance sub-plot at the start, but this kept to bare minimum and he even writes a brief touching scene that doesn’t feel contrived. Ample shades of grey are added to the characters of Muthuvel and KK, whose troubles and decisions channel our anger & anguish towards the system that uses them as pawns. If with Pandi, Vetrimaran is showcasing the voice of the downtrodden; with Muthvel and KK, he marvelously establishes the voicelessness of those in power. Notes of irony could be felt in the dialogues (for eg, when Muthuvel asks Pandi & co to clean the police station). Even when words get provocative, they remain meaningful without evoking conspicuous emotions. 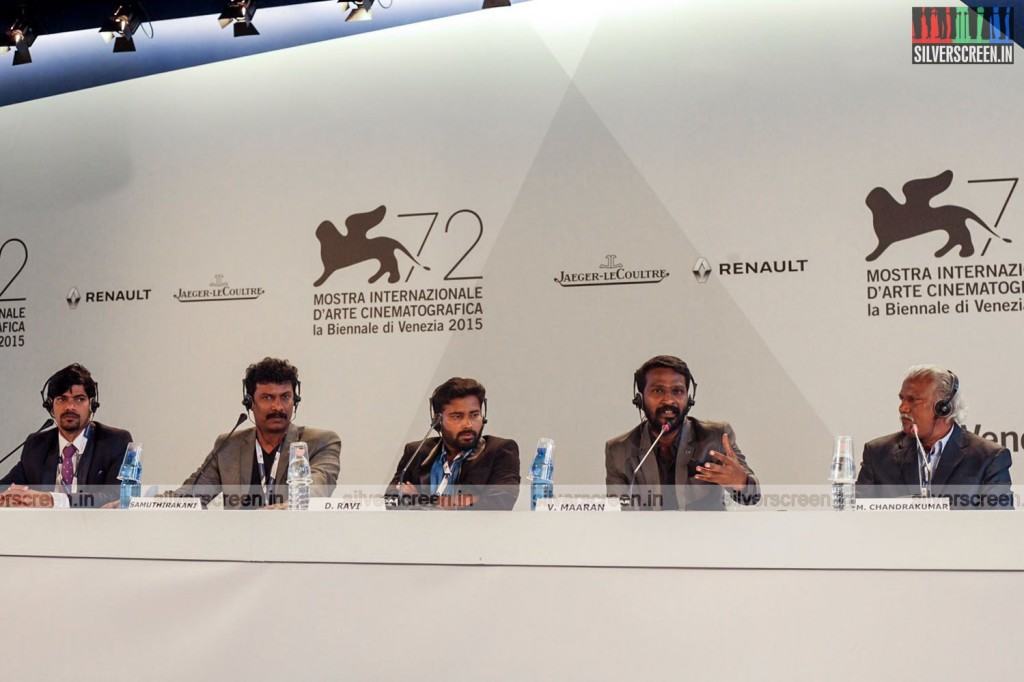 As a Director, Vetrimaran seamlessly integrates his dialogues and character traits to the visuals. A public park, a roadside barber-shop gracefully establishes the kind of life Pandi leads. The director handles the police interrogation scenes with an anticipated raw realism and there is enough emotional sensitivity in those scenes, which otherwise might have numbed our senses. The final sequences are astoundingly staged, especially when the ‘dirty’ cops search through the filthy swamps, located at the middle of a neighborhood. Brilliant performances are extracted from all the actors on-screen [special mention must go to the actor Ajay Ghosh, who plays the role of Guntur inspector]. Dhinesh, Samuthrakani and Kishore impeccably bring out their characters’ vulnerabilities when facing abrasive situations (the shock KK shows when he is mistreated by the police is one of the unforgettable sequences). It does get a little melodramatic and the embroilment aspect of Pandi & co into the problems of KK seems a bit inorganic, but these little blemishes could be definitely overlooked.

The total lack of accountability and apathy are the troubling realities of the law & justice system, which has ingrained to a point that the line between good and bad is totally erased. The film enthrallingly states how the corruption of few at the top could play the role of a dragnet, chucking out the lowly victims of socioeconomic ladder and soils the honest attitudes of those in higher order. The system, including our media rewards or pressures police for locking up ‘criminals’, although we never understand certain dubious investigative procedures exercised to catch the ‘accused’. “Visaranai” sheds light into those dingier areas of our system. Of course, all systems are flawed because we humans who made those are flawed. Nevertheless, this film isn’t about the eradicable flaws; it is about the emotional numbness of the top citizens of our society, who joyously takes up the role of a prey. As the movies ends up on a blank screen with a conversation in the background, feelings of fear, anger and helplessness twists inside us.

“Visaranai” (118 minutes) works both as a gritty thriller and a thoughtful character study. The film gives us a feeling of having experienced something real, which is something we don’t often experience in Tamil cinema.