Radioactive [2019]: ‘TIFF’ Review – An Ordinary Film about an Extraordinary Person

Radioactive (2019) tells the incredible true story of physicist Marie Curie. It chronicles this women’s scientific breakthroughs and weaves in necessary elements of her personal life. One of the reasons I’ve always loved film is for its ability to bring our attention to people and topics we may otherwise never hear off. Thanks to this film, I now feel informed about Marie Curie and her story. It’s a tale worth telling and a journey worth knowing.

Rosamund Pike is front and center in this film. She embodies Marie Curie in a believable and arresting performance. Her screen presence throughout the film is fantastic. She soars in both, moments of genius and vulnerability. Sam Riley as her husband Pierre Curie is also very good. They share crackling energy and banter early on in the film. As their relationship progresses, the performances convincingly do as well around it.

The first half of Radioactive is extremely engaging and rather enjoyable. It’s fast-paced, well-acted and focused. There’s thrill and emotion, drama and romance. The joy of love and discovery. The script also highlights how even being a genius with so much to give was second to being a woman in those times. Our protagonists take on personal and professional challenges. It’s all very exciting and I was completely invested. 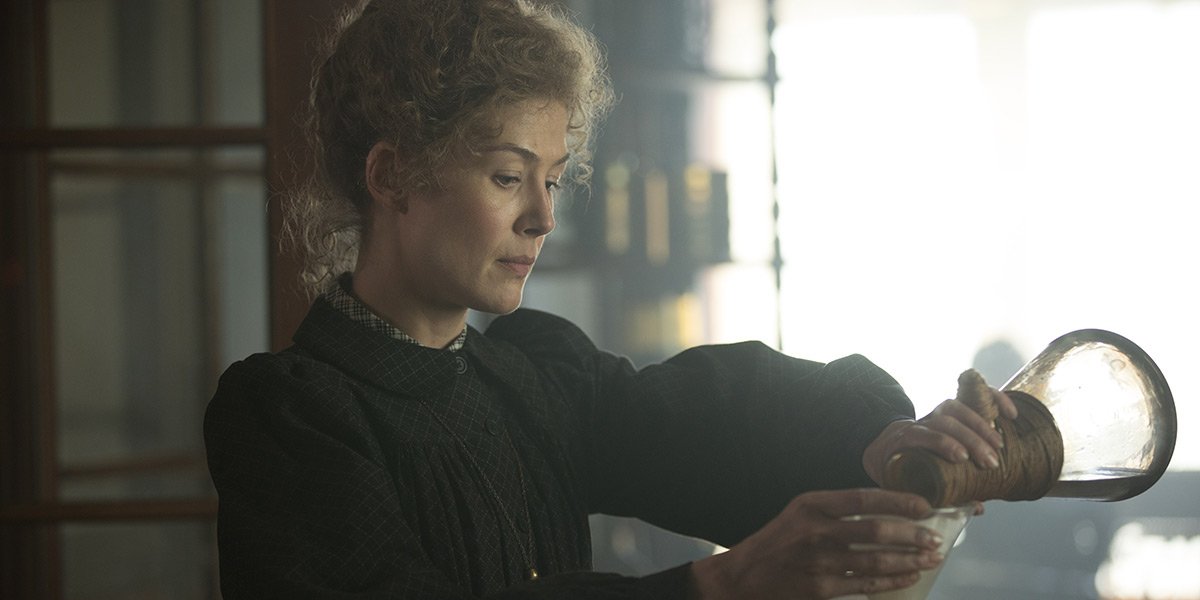 In the second half, post a significant plot development, the film loses its steam. It never recovers the momentum and settles into a steady grove of going through standard biopic tropes. Marie Curie is let down by writing that’s competent at telling the story, but doesn’t reach at being exceptional like its subject was. The pace slows down and the plot developments lack the zeal of what came before. While this can partly be attributed to character growth and change, it felt like there was untapped potential.

The film features some interesting stylistic choices. Of note, its edits and how it makes us understand past and present. It goes out of its way to ensure the average viewer fully appreciates the impact and ripple effect of the discoveries being made in the film on the world and overtime. Despite occasionally being clumsily executed or breaking narrative momentum, I thought this was a smart idea and very well done on the whole. The score is effective and production design is top-notch.

Radioactive is an ordinary biopic about an extraordinary person. Rosamund Pike anchors it with a compelling performance. Despite my issues with the script, it gets the job done. The film succeeded at educating me while entertaining me, and I recommend it.

Radioactive [2019]: ‘TIFF’ Review – An Ordinary Film about an Extraordinary Person