To find an equivalent of Ship of Theseus for what it aims to say, and how, one would need to do a thorough examination of contemporary cinema from all over the world. It is a film that begs to be watched, and certainly not just once.

From the moment a young, blind, middle-eastern girl appears on screen photographing everyday life in the bylanes of Mumbai it becomes clear that Ship of Theseus is, in every way, an unusual film. It is befitting that debutant maker Anand Gandhi, formerly known as the writer of several archetypal soap operas of the Indian small screen, serves up his thought experiment of a film in three independent but interconnected tales which reach their potential only when held up in context with one another.

The stories— of a blind photographer who grows uneasy about her craft once her sight is restored, a monk who is forced to consume allopathic medicine—against which he is campaigning—to save his own life, and a stock broker who feels guilty after a kidney transplant by possibly dubious means—are brilliantly cast and performed. Aida Elkashef as Aliyah, Neeraj Kabi as Maitreya, and Sohum Shah as Navin, are particularly captivating on screen and carry their respective stories forward with grace.

Pankaj Kumar’s camera is raw and breathtaking—often simultaneously—and compliments Gandhi’s story telling which delves into intricacies of everyday life and transcends the material to philosophical discourse. And herein lies the problem with Ship of Theseus—the film is too densely packed with textual matter for its own good. Case in point the scene where Aliyah and Vinay argue over the validity of Aliyah’s photography and her place as an artist, and one in which Maitreya and Chavaka throw philosophical ideologies at each other while walking to a lawyer’s home, seem more like panel discussions on art, philosophy, theology, and the universe, than conversations between two people. Moments like these are hard to follow and frustrating, and thus fail at perhaps what the filmmaker hoped to achieve—to force the audience into ‘outrospection.’ 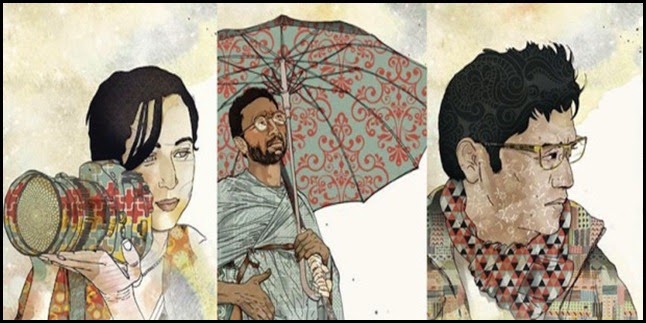 Despite being craftily cut, the film is often slow as the director’s indulgence rests for far too long on his subjects and conditions. The challenge for the maker of a film like this would be to create a world where his philosophy and worldviews intersect and run parallel with the everyday workings of ‘normal’ life that we see around us. Whether Anand Gandhi succeeds at that or not is up for debate.

Nevertheless, Gandhi’s effort is a brave and unique one. To find an equivalent of Ship of Theseus for what it aims to say, and how, one would need to do a thorough examination of contemporary cinema from all over the world. It is a film that begs to be watched, and certainly not just once.