The Offer (2022) Episode 7: Review, Recap & Ending Explained: Sixth episode of The Offer (2022) revolved around Al Ruddy (Miles Teller) dealing with the repercussions of getting on stage with Joe Colombo (Giovanni Ribisi); thereby sending the message that Paramount and Gulf+Western are in bed with the mafia. Charlie Bluhdorn (Burn Gorman) found himself in a pickle as that move soured his efforts to sell Paramount. In a fit of anger, he even fired Ruddy from The Godfather (1972). But as soon as Colombo got a scent of that, thanks to Bettye (Juno Temple), he strong-armed the production, via Francis Ford Coppola (Dan Fogler) to rehire Ruddy or else he wouldn’t allow the movie to be made. That saved Ruddy and the movie. Robert Evans (Matthew Goode) gave a rousing speech which helped in saving Paramount.

Even if you haven’t watched a single episode of The Offer or you aren’t interested in watching The Offer, this is the one episode you must make an exception for. Because it is one of the greatest displays of the collaborative process that is filmmaking; something that a lot of movies about movies or shows about movies fail to nail. Everything from the way it is bookended by the famous horse’s head to the way scenes are moved up and down in the schedule and where the producer and studio heads factor in, it’s all laid out very beautifully. And it’s apparent that the showrunners know that they’re doing a good job at that because they literally include a character called Rosie, who acts as the audience surrogate to understand what happens on a set. The tidbits about what went down while making The Godfather is an added bonus.

The gangster side of things can appear generic at times because you have seen it happen, virtually, of course. The performances from Ribisi, Joseph Russo, Anthony Skordi, Jake Cannavale and Lou Ferrigno are fantastic and will keep you engaged though. And that’s when you’ll start to notice that, intentionally or unintentionally, there are so many parallels between the real-life gangster story and the fictional one that Puzo and Coppola told. Yes, The Offer is a fictionalization of that real story as well. But it’s very close to the real story and that realization gives you a newfound sense of appreciation for the accuracy of The Godfather’s portrayal of Italian-American gangsters. As for every other aspect, it is fantastic. Matthew Goode steals every scene he is in and Miles Teller gives a solid performance both on the screen as Ruddy and off-screen as the executive producer of the show. 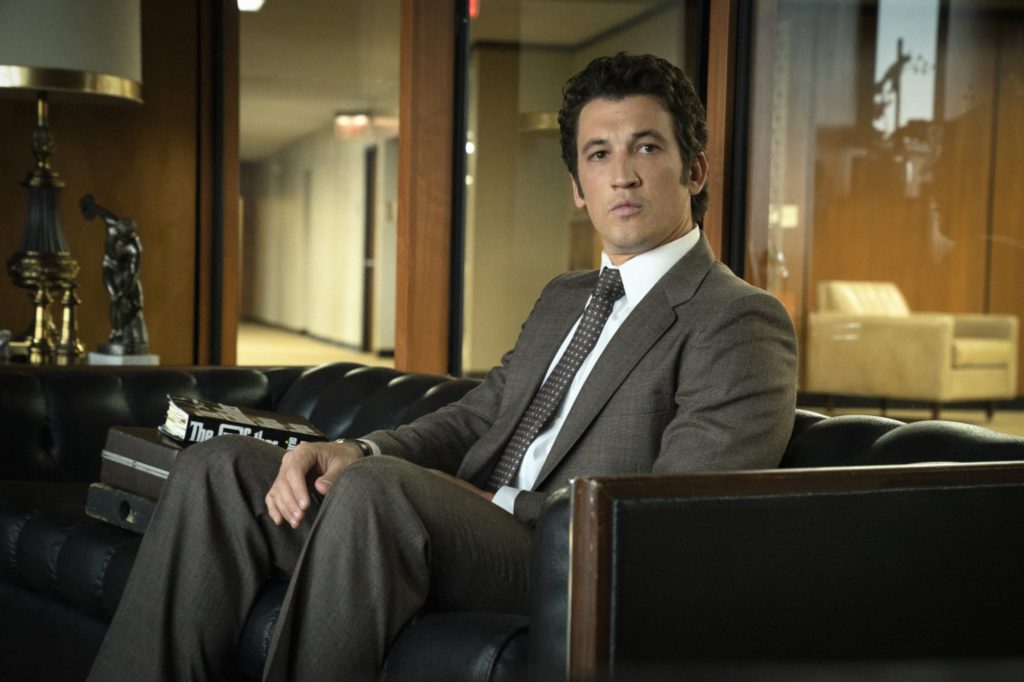 Titled ‘Mr. Producer’, Episode 7 of The Offer begins with production designer Dean (Eric Balfour), Coppola, Bettye, and Ruddy examining the horse head that’s supposed to be used in the Jack Woltz scene. Ruddy and Coppola are appalled by it while Dean tells them it’s just a mock-up and it will be improved upon with lighting and shadows. Bettye agrees and Ruddy appoints her to get a more realistic looking horse head.

Barry Lapidus (Colin Hanks) and Jack Ballard (Paul McCrane) show some cut of Al Pacino’s (Anthony Ippolito) performance to Bluhdorn in order to convince him to get Pacino out of the movie. Because, according to those two, Pacino is ruining the movie. Bluhdorn orders them to get him a better Michael Corleone then instead of wasting his time. Robert Evans arrives on the set of The Getaway (1972) to meet up with Ali MacGraw, only to find out that she’s with Steve McQueen now. Evans is distraught by this turn of events as he realizes how long he has ignored MacGraw to make things so bad and drives away.

Colombo gets the updates on Joe Gallo (Joseph Russo), kickbacks from the movie, and Ruddy from Caesar (Jack Cannavale) and then heads out to meet up with Gambino (Anthony Skordi). Dean talks to Ruddy to get more money for building sets. Ruddy delivers a cheaper option and says that if they face any issue with it, he will deal with it later. That’s when another problem shows up. The actor who was supposed to play Luca Brasi is dead. So, they start training Lenny Montana (Lou Ferrigno) to take on that role. That’s followed by a hilarious scene of Bettye and Caesar trying to get Lenny to say the lines as it is in the script. Coppola says he’ll improvise the scene in a way that includes Lenny’s inability to remember the lines Brasi wants to say to Vito.

On the set of the opening scene, Ruddy, Coppola and Bettye discuss the inclusion of a cat (which is actually a stray cat and something that’s not meant to be in the scene). Before they start rolling though, Ruddy is called up by Evans to talk about the Al Pacino problem and how Lapidus has convinced Bluhdorn to fire him. Ruddy says that can’t happen and Evans agrees, even though he isn’t fond of Pacino.

Ruddy gets back to the set to find Brando (Justin Chambers) having a deep conversation with Coppola, which is then subverted by Robert Duvall (Derek Magyar) wearing Brando’s lines on his chest because Brando doesn’t believe in “learning” his lines. Ruddy then tells Coppola about the Pacino situation and requests him to shoot Pacino’s best scene a little early so that they can send it to Bluhdorn and make him walk back on his decision to fire Pacino. Coppola agrees to do it. Then Ruddy orders Gordy (T.J. Thyne) and Aram Avakian (Geoffrey Arend) to not let any dailies go out unless Coppola or he himself doesn’t approve it.

Colombo meets up with Gambino to submit the money for the fundraiser. Gambino says that was concerned about the Italian-American Civil Rights League but Colombo has proved him wrong and tells him to keep it up. As soon as Colombo leaves, Gallo enters; thereby indicating that Gallo is now in cahoots with Gambino.

We cut back to the set of The Godfather and Ruddy sees Gordy and Coppola fighting about the lighting and Avakian and Ballard muttering how the movie is falling apart. Sensing that Gordy is ready to leave the movie, Ruddy goes to convince him to stay. He tells Gordy that if he leaves, the movie will shut down and a lot of people will be unemployed. Gordy says he’s going to complete his work for the day. But then he is going to bid goodbye to the movie unless Coppola apologizes.

Ballard and Avakian are seen reporting to Ballard about the equation amongst the movie’s crew. They say that the movie is not going to be made. Lapidus asks for a solution and Ballard says that they should get Coppola fired after getting Pacino fired and giving the reins over to Avakian. Coppola says that he is not going to apologize to Gordy. Ruddy gives him the lowdown by saying that a lot of people want the movie to fail and they really want Coppola to fail (namely, Lapidus, Ballard and Avakian). Coppola’s apology to Gordy is going to save the movie and won’t give the haters a reason to celebrate. Coppola and Gordy bury the hatchet. Evans arrives to tell Ruddy to get ready to party (which is less of a party and more of an effort by Evans to drown his sorrows).

Evans leaves the party unannounced and Ruddy meets Rosie Molina (Aimee Carrero). They start talking about the appreciation of art, the Lunar landing, and getting inspired. At the studio, Bettye finds Caesar waiting for her to walk her home. Someone tries to steal Bettye’s purse, Caesar chases him down and punches the living hell out of him. That shocks Bettye while Caesar is obviously nonchalant about it. Ruddy and Rosie hook up.

The next day, he arrives on the set to shoot the Sollozzo shooting scene and things start going sideways from the get-go. Pacino senses that he’s about to be fired. Coppola tries to ease him into the scene by walking him through it. Rosie arrives on the set to understand what Ruddy actually does. Bluhdorn follows suit to talk about how he dislikes Pacino and things are going to shit. Evans appears all hungover. Then the restaurant owner says that they want the crew out of there because it’s impacting his business. Ruddy brings in Caesar to lock up the restaurant owner so that the shoot can go on undisturbed. And the scene goes brilliantly and it convinces Bluhdorn to keep the movie going. Rosie finally gets what Ruddy does and takes the fake horse’s head as a souvenir because she thinks it represents America.

Caesar and Bettye go to a meatpacking factory to get a real horse’s head, where Caesar apologizes to Bettye for being violent the other night. At the restaurant set, Ruddy brings in Coppola, Evans and Gordy for a little chat. He brings the rest up to speed about how the dailies got leaked. Ruddy figures out it’s Avakian and Ballard’s doing and goes after them. Avakian and Ballard say that they are going to do whatever they want to do with the dailies and Ruddy can’t do anything about it. Caesar arrives to inform that Colombo wants to see Ruddy for dinner.

Ruddy thanks the Colombos for the amazing food and as Colombo’s wife leaves the table, Ruddy asks him about the tension that Gallo is generating. He asks Colombo if he’s alright. Colombo says that he’s fine. As Ruddy leaves, Colombo asks if he’s going to come to the Italian-American Civil Rights League rally. Ruddy says that he isn’t going to miss it for the world. But before going there, he and Evans show the dailies to Bluhdorn to win him over. And he’s won over. Next they see the new horse’s head, unaware of the fact that it’s real. When Avakian arrives, Coppola fires him and Ruddy fires Ballard. They say that they can’t do that and Evans says that he can and he has. Later, the rally goes horribly wrong as someone guns down Colombo and we see Gallo kissing Gambino’s ring.

THE OFFER EPISODE 7 IS NOW STREAMING ON VOOT SELECT & PARAMOUNT+.