Top Gun: Maverick (2022) is a film people had been waiting for for quite a while. The delays to this legacy sequel only raised the expectations fans had based on the original. Top Gun (1986) had aerial dogfights, human attraction, rivalry, team, and family. The makers realized what the audiences would lap up more, drew parallels with the original, built on certain threads, and ensured that the over three-decade-long wait to return to the ‘Danger Zone’ had a massive payoff.

Kenny Loggins’ song proves to be the second of innumerable nostalgia traps that get scattered throughout the tribute to Tony Scott. Tom Cruise, his jacket, his bike, his devil may care attitude with his stunts and words, the scenarios that almost serve as a mirror image to the events from 36 years ago, Harold Faltermeyer’s Top Gun anthem; the list is endless.

This may lead to a worry. Is it imperative to watch the original? It isn’t really necessary as the required information gets displayed by the set decorators and by the director in the form of flashbacks. For those who have watched the original, there will always be a reward after watching a blockbuster sequel. It’s up to you.

Top Gun: Maverick sees Pete ‘Maverick’ Mitchell return to the US Navy’s Fighter Weapons School at Naval Air Station Miramar in San Diego, California, to coach a bunch of Top Gun graduates for a dangerous mission. That would be too simple, just featuring astounding air maneuvers. Hence, the makers added a few connections from the past, with Goose’s son being part of the class. As the demons arise, Maverick must become the reluctant teacher, mentor, and much more, as his impressive (rash) flying and decision-making has a motivation. 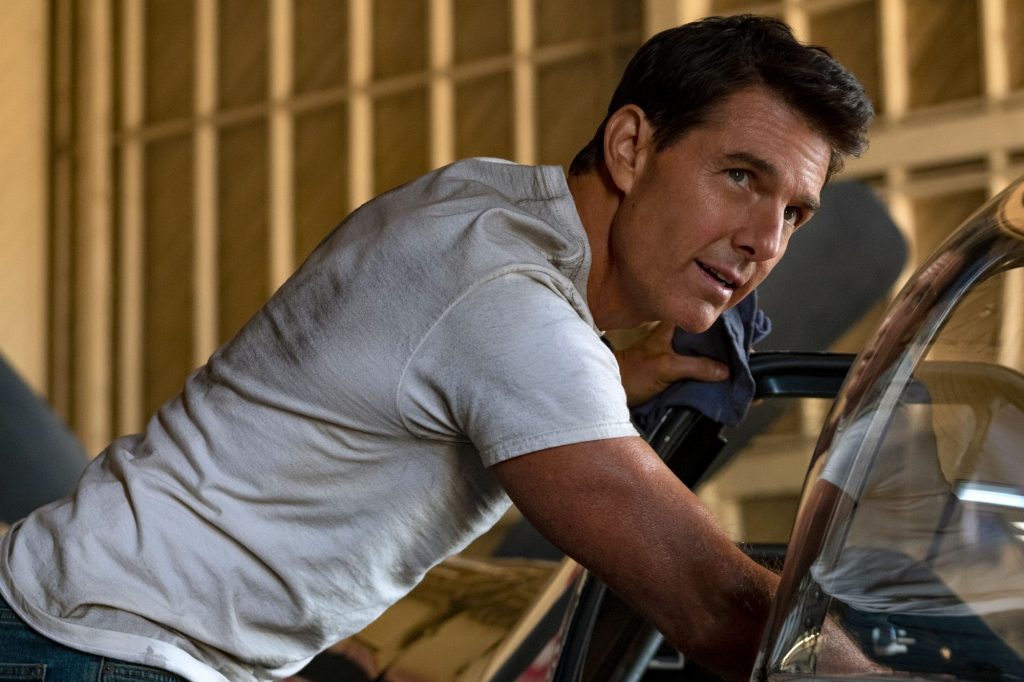 The mission is in sight right from the start, which makes Top Gun: Maverick better than Top Gun. The gravity-defying challenge of what’s humanly possible is something that was built on throughout what is essentially a war film that functions as not a war film. We don’t know the identity of the other side, which helps eliminate the feelings of humanity that emerge in war films and focus on the evils of armed combat. Dunkirk is a film that did this, and so did Top Gun, as the enemy wasn’t explicitly specified, even though the era made it abundantly clear.

This creative choice in Top Gun: Maverick also helps retain the focus on the Top Gun crew and does not alienate anyone. Even the other side likes movies, right? And Tom Cruise’s Maverick is a global star, who has returned to one of his propelling vehicles from the 80s.

While being much more, Maverick exhibits the cockiness that made him an admired name among cinephiles. However, we got to see his daredevilry, determination, and ability to lead from the front and teach, and win the respect of his team with his actions.

Universal and Joseph Kosinski ensured that Top Gun: Maverick arrived with a bang and soared into the stratosphere. The sight of Maverick (Tom Cruise) having to pilot a plane at 10Gs is insane. Seeing the jet cutting through the air and the dust flying is marvelous. It provides us with our first glimpse at the air scenes that delayed this offering. People had been waiting for this movie for years. The tardiness also irked many as they wondered how complex these scenes could actually be. Now we know.

While the original let audiences see the inverted maneuver, and a fly-by; Top Gun: Maverick let viewers experience the move as Pete ‘Maverick’ Mitchell literally floated and flew by his students’ jets, through the valley, and in a duel.

The corkscrew scene between Maverick and Goose is a sight to behold. Other flight sequences that come to mind would be… basically every single one that Top Gun: Maverick offers. However, the one featuring Maverick rediscovering himself in typical fashion takes the cake. I can still hear the planes as I think of a particular still while writing this.

Here, one needs to praise the director for refraining from using the background score and relying on diegetic sound to enhance the cinematic feel. The jets zooming through the sky, combined with the engines, is a gripping sound effect itself. Combined with Eddie Hamilton’s edits and cuts, they are timed well as one isn’t lost in the action from multiple perspectives. It helps cinephiles maintain an understanding of what’s happening amidst the chaos in the sky.

Fighter jet formations also have the ability to give you chills as it is something that has been built towards. Claudio Miranda’s camera ensures that the jets dominate the screen and present the physical and mental trauma of each pilot as they push the limits. This is very nice as the audience isn’t distanced from the humans in the film while they watch the breathtaking stunts with expensive toys funded by the taxpayers.

While exhibiting the technological advancement in filmmaking since 1986, Kosinski took care to let the focus be on the lead and on what fans loved the most about Top Gun- Cruise’s F-14 stunts and his boyish charm as he looks delighted to pull them off.

They aren’t F-14s in this film (?) and the powers that be see any plane with a pilot as worthless in a day where drones rule the roost. Cruise, however, is a star from the past, and like his character, he refuses to fade. He isn’t a part of any superhero cinematic universe; most of these actors aren’t heavily in the limelight.

“The end is inevitable, Maverick. Your kind is headed for extinction.”

But Cruise is going nowhere, just like his character says in Top Gun: Maverick. A mission tailor-made for him, requiring yesteryear skills, and focusing purely on him, this film is purely a vehicle for its lead star. Its title serves as the perfect piece of information and even if viewed as the film progresses, it isn’t out of place.

The sight of him willing his machine to push beyond and internally pleading with his body to permit him to take the insane Gs shows us an unseen side of the central character. Elements retained, he is much more experienced as would be expected even if he is still an “experienced” captain.

‘Iceman’ has a good cameo appearance, which brings a circle to their friendship that came from the concluding scene in Top Gun. That scene between two former rivals turned friends is the one stand-out non-aerial combat moment in Top Gun: Maverick. Tom Kazansky’s importance is woven into the film and Maverick’s close attachment to him is shown by multiple characters. However, certain things that can be looked at unfavorably in this film are the lack of original characters. The likes of Charlotte Blackwood, Mike ‘Viper’ Metcalf, and Sam ‘Merlin’ Wells were absent.

A good way to look at this is the fact that the new brood, i.e. Miles Teller, Glen Powell, Lewis Pullman, and Monica Barbaro, got their time in the spotlight. As is the case with legacy sequels, the characters mirror the traits of the ones in the original. That could have been changed here, as this isn’t an anthology or spiritual sequel. One particular character may constantly draw comparisons with Pete Mitchell and that really isn’t good.

Right from the establishing scene in the bar, one can explore the common mannerisms with yet another nod to the original. Teller seemingly channels in Anthony Edwards. However, there is a clear rage against Maverick, which is what separates his character from that of his father. Miles Teller ably brings the inner conflict and personal connection to succeed, something that isn’t what his character purely is from his introduction scene, but it comes to the fore once he learns the identity of his Top Gun instructor.

An understanding of the term ‘mach’ may have helped boost the magnitude of airplane scenes. The expressions and sight of the trail of fumes left behind did their work, but a layman’s comprehension of the speeds may have increased the wow factor that Hans Zimmer, Lady Gaga, Harold Faltermeyer, and Lorne Balfe’s background score aim to provoke among the audiences.

Jennifer Connelly‘s Penny Benjamin doesn’t come close to Kelly McGillis’ Charlotte Blackwood. Also, Lady Gaga’s Hold my Hand isn’t something that can hold a candle to Berlin’s Oscar-winning song. The fact that Gaga’s song wasn’t played during the film may have worked against it, as it didn’t subconsciously enter the audience’s heads. Many may not even know about this song as they would have exited the auditorium once the end credits rolled.

Maverick, being the indestructible force, could alienate audiences as he just can’t go wrong. Even when the end is nigh, and you believe that it’s over; it’s not. Perhaps the writers and the director opted to use the advice that had Pete Mitchell give his charges, i.e. don’t think. The audiences may also not think, and it’s highly doubtful that this train of thought may have come up as Top Gun: Maverick proves to be a feel-good, exhilarating experience.

Top Gun: Maverick will appeal to everyone who has the Peter Pan complex. One not wanting to grow up as responsibilities will hamper their natural instinct, which is what they have that makes them thrive. This Kosinski directorial will appeal to the ones who find it tough to be the teacher, as it may prove to be a tedious task to teach something you weren’t taught. The dialogue

“I am a fighter pilot. I am into naval aviation. This is not what I do. This is who I am.”

However, it can inspire the leader to rise to the occasion and take the bull by the horns and make the ultimate sacrifice.

Catch Top Gun: Maverick in the cinemas, especially in IMAX, to experience the insane aerial scenes with the pulsating sound of the fighter jets. Watch it for a complete film experience, astounding action, rivalries, drama, and exhilarating dog fights. As you slowly move to the edge of your seat with the perfectly timed cuts from multiple first-person perspectives to neutral observers, breathe, as the blockbuster’s adrenaline-filled exhilarating aerial sequences will take your breath away.