“A Fugitive from the Past is an idiosyncratic thriller which withholds complex themes and character attitudes beneath its simple crime narrative surface.”

Born in 1898, Tomu Uchida began directing during the silent era. He was known as a stylistic genre film-maker and for imbuing his narratives with shrewd social criticism. Naturally, unlike his counterparts of the era, Kenji Mizoguchi and Yasujiro Ozu – the textual ambassadors of Japanese classicism – Uchida’s silent & pre-war films were not known outside Japan. One of Uchida’s prominent pre-war films is Earth (Tsuchi, 1939) which was based on the 1910 naturalist novel of the same title. Kinema Junpo, Japan’s oldest film magazine, declared it the best film of 1939. Driven by the documentary-realism, Earth portrayed the harshness of surviving in a rural landscape, plagued by unmerciful nature and oppressed by the feudal economic system. Influenced by the Soviet and German methods of film-making, Uchida’s Earth unflinchingly showcased a farming community, mired in debt and poverty, unlike the regular sentimental melodramas on peasant life.

By the end of the war, Uchida went to work in China for the Japanese owned Manchuria Film Association. He didn’t make any films during this decade though he stayed to assist the technical development of Chinese cinema. He returned to Japan in early 1950s and made Bloody Spear at Mount Fuji (1955), a popular jidai-geki genre film. Uchida followed it with more sword-fighting period dramas which surprisingly lacked the strong political and social undertones of his pre-war movies. Eventually, Uchida came to present his own artistic desire to comment on post-war Japan by helming A Fugitive from the Past (Kiga kaikyo aka Straits of Hunger, 1965), an adaptation of Tsutomu Minakami’s novel. Though critically neglected in the west, this film was Uchida’s last successful work in Japan before he was diagnosed with cancer and died in August 1970. 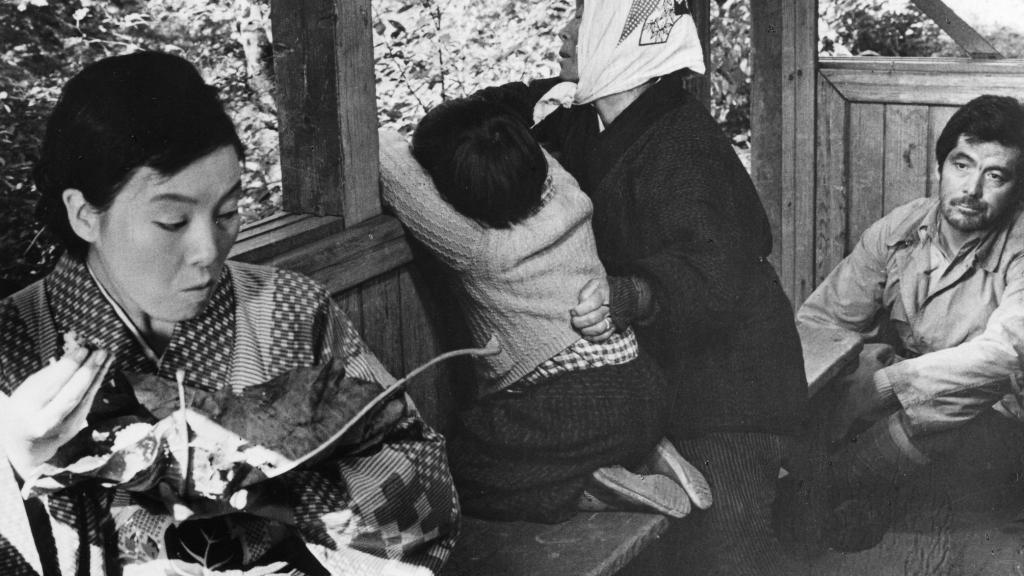 Shot on 16mm, and then transferred to 35mm, A Fugitive from the Past has the fascinating grainy look of 60s black-and-white cinema. The story, which itself is a reworking of Les Miserables & Crime and Punishment combined with Buddhist precepts of ‘karma’, belongs to the crime/thriller genre. But similar to Akira Kurosawa’s thriller masterpiece High and Low (1963), the fascination of watching A Fugitive from the Past doesn’t lie in simply following the story. Rather, its bewitching quality lies in observing the masterful visual construction and in the nuanced detours which examine the post-war social transformation and hidden traumas of war-ravaged society.

Related to A Fugitive from the Past: Pale Flower [1964] – A Noirish Parable with Striking Imagery

A Fugitive from the Past opens with a documentary-like voice-over, describing in a detailed manner the typhoon that hit the northern island of Hokkaido in September 1947. Nearby, in the small-town of Iwanai, a fire breaks out in a pawnshop. Two men flee from the shop and together with a third man, they take a train to the coastal town of Hakodate. Just when the three reach Hakodate, they are welcomed by the pandemonium caused due to the typhoon which wrecks a ferry. The firemen, borrowing the local fishing boats head off to rescue the survivors of the shipwreck. More than 500 hundred people die in the ferry accident, but authorities couldn’t identify two corpses, whom they confirm were neither passengers in the ferry nor belong to fishermen, the firemen community. Yumisaka (Junzaburo Ban), one of the detectives involved in the Hakodate rescue attempt, upon returning back to his home-town of Iwanai finds that a fire set-up at the pawnshop to cover up murder and robbery has burned down larger parts of the town.

Investigations reveal that the two who fled from the pawn shop are Numata and Kijima, recently released prison inmates. Yumisaka learns that the third one is named Inukai Takichi (Rentaro Mikuni). The three have stolen a rescue boat. When Yumisaka receives information that the unclaimed bodies are that of Numata and Kijima, he comes to the conclusion that Inukai has killed them both for the loot, i.e., 800,000 yen. Inukai probably crossed the Tsugaru Strait alone, and to support Yumisaka’s theory, police finds a spot where the boat was burned. While running away from the law, Inukai meets a prostitute named Sugito Yae (Sachiko Hidari), with whom he goes to a brothel house in the small coastal-town of Ominato. She serves him food, cuts his nail, and entreats him to stay the night. Instead, he leaves her a large tip – 34,000 yen – and leaves the place.

Yae uses Inukai’s money to pay off her family debts and decides to lead a relatively straight life in Tokyo. She puts him on a pedestal and worships him like a saint. When Yumisaka’s investigation brings him to Yae, she deliberately misleads the detective. The smart Yumisaka does uncover the possible connection between Yae and the fugitive Inukai, but his trip to Tokyo turns futile as he is unable to trace Yae. In the second-third of the narrative, police-procedural narrative paves way to earnest social drama as Uchida gracefully tracks down the hardships Yae faces in the post-war America-occupied Tokyo. She eventually takes up her old profession, saves up money, and harbors the dream to meet Inukai and thank him for his generous gift.

Ten years passes and the red-light districts are being closed down since prostitution has been made illegal. Just as she receives this news, Yae sees Inukai Takichi’s picture in the newspaper. But he is now Tarumi Kyoichiro, a successful businessman who is in the news for his charitable donation to help convicts rehabilitate. Naturally, things turn worse. And as the retired Yumisaka and the city detectives try to prove that Inukai Takichi is Tarumi Kyoichiro, interesting ambiguities in the fugitive’s past surfaces in the narrative. Inukai aka Tarumi admits to his guilt, but refuses to admit that he even committed a crime.

Though a genre cinema, A Fugitive from the Past is memorable for Uchida’s poignant visual detours which offer a sharp portrait of post-war Japan. There are sweeping set-pieces as when Uchida deftly showcases the chaos during the rescue attempt or when he tracks down Yae’s petrified movements from above, the yakuza men blocking her attempts to lead an honest life. But there are also touching moments when the detective’s starved children squabble over potatoes or when a granny receives a packet of cigarette from Inukai like a treasure, or when Yae talks with her father about moving to Tokyo.  The narrative is full of such little moments which tackle the socioeconomic problems of occupied Japan.

Adapted to screen by Naoyuki Suzuki, the character of Inukai aka Tarumi is itself seen as a parable for post-war Japan; lionizing its newfound prosperity while forgetting the crimes of the past. The script was superbly constructed, neatly divided into three chapters which start from the strait moving to Tokyo, and eventually finishing at the strait. Uchida’s observation of the different topographies also touches upon the sense of the social changes Japan is undergoing. The writing imparts a fatalistic sense to the proceedings, depicting how the dark past influences the present. Unlike High and Low or Imamura’s Vengeance Is Mine, A Fugitive from the Past doesn’t provide an examination of the titular criminal’s state of mind. As I mentioned above, the uncertainties in Inukai’s past and the ambiguities of his actions, strives to exhibit him as a totemic figure of the repressed war-torn society rather than as an individual.

Mervyn LeRoy’s magnificent depression-era drama I Am a Fugitive from a Chain Gang (1932) offered a very individualistic take on a social conflict of the time. With Inukai who is more of a personification of his nation, we don’t get a clear understanding of his emotions including his final showcase of guilt. Nevertheless, A Fugitive from the Past (183 minutes) is an idiosyncratic visceral thriller that withholds complex themes and character attitudes beneath its simple crime narrative surface.

A Fugitive from the Past (1965) Links: IMDB, Letterboxd

Parallax [2020] Review: A Film Occupied with its Intention but Stumbling in its Execution