Mexican actress Jana Raluy delivers a compelling performance as Sonia. Her character is striped off vanity or annoying self-righteousness or glamor. Although the path she takes is questionable, we can easily relate to her despair, since the kind of insane system that pushes people to their breaking point is in place all over the world.

A Monster with a Thousand Heads [2015] : A Taut Supremely Crafted Social Thriller

Uruguayan-born Mexican film-maker Rodrigo Pla’s movies often deal with the social apartheid or class conflicts. His common folk characters are pushed to breaking point due to the polarization and total lack or misuse of state control. Rodrigo’s movie universes are mostly driven by emotional dysfunction, frustration, and guilt. The director’s first movie The Zone (2007) showcases the violent conflicts between the residents of a shantytown and nearby wealthy gated community that has its own security force. Rodrigo’s second film The Desert Within (2008) is set in the backdrop of Mexico’s Cristero war and it’s an intense exploration of religious faith’s hypocrisy. The third (and best) film The Delay (2012) was set in the director’s native country Uruguay which chronicles the relationship between a distressed single mother and her ageing father. With A Monster with a Thousand Heads (Un monstruo de mil cabezas, 2015), Rodrigo Pla tackles the nightmarish nature of bureaucracy which kindles the righteous fury of a frustrated wife. 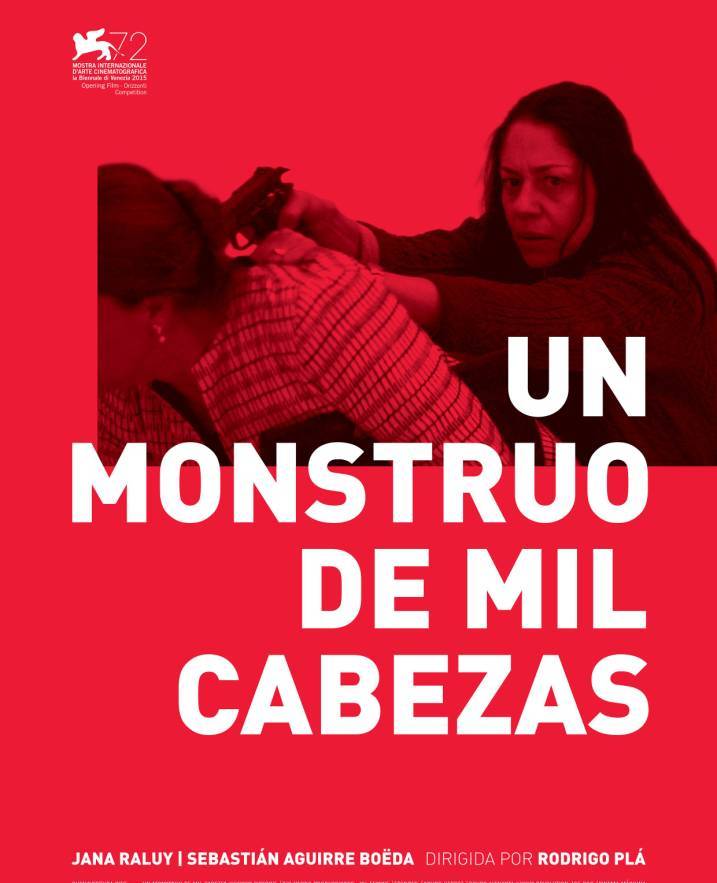 Director Rodrigo Pla fled with his parents from Uruguay when he was nine years old. The 1970s brutal military dictatorship propelled Pla’s family to seek refuge in Mexico. He studied at Mexico’s top film school – CCC Film Training Center. Pla’s wife Laura Santullo, also from Uruguay, has written the script of his four films. Although their films touch on different social justice themes, there’s none of the lecturing usually found in conspicuous message-driven cinema. Rodrigo Pla’s characters are morally complex and their unpredictable human behavior drives the film; not the neatly-tailored plot. Moreover, the carefully-constructed audiovisual dynamics often takes an objective viewpoint to depict the complexity of human condition. A Monster with a Thousand Heads was based on the novel written by Laura Santullo (she wrote the script too). Its plot looks pretty familiar which we have witnessed in grandstanding Hollywood movies like John Q and Falling Down. But the Mexican film keeps profound art-house aesthetics in the foreground and the sensational action of the protagonist is mellowed by the brilliant interludes of objective viewpoint.

Running for mere 75 minutes, this small but edgy art-house thriller opens with an unbroken shot, immersing us into the tragic atmospherics of Sonia Bonet’s (Jana Raluy) family. She wakes up to the sound of her terminally ill husband Guillermo collapsing on the floor. Her teenage son and daughter sleepily comes down from upstairs. She calls for an ambulance and the static camera passively observes the quiet devastation. Sonia is desperate to get approval for new expensive treatment which she believes may save her cancer-ridden husband. But the insurance company denies her approval. After failing to make an appointment with the indifferent doctor, Sonia and her son Dario (Sebastaian Aguirre) attempt to confront Doctor Villalba (Hugo Albores) in order to plead for their cause. The doctor, however, deliberately avoids her. Sonia and Dario follow the doctor to his home. The doctor’s empathetic wife allows them in. She has disrupted his squash session and he gives Sonia a routine excuse. Determined to make the doctor review her husband’s case, Sonia pulls a gun on him. As it turns out, only the persons in higher chain of command can reevaluate Sonia’s claim. Hence she takes a small trip into the innards of the freewheeling money monster which somehow spirals into violence. 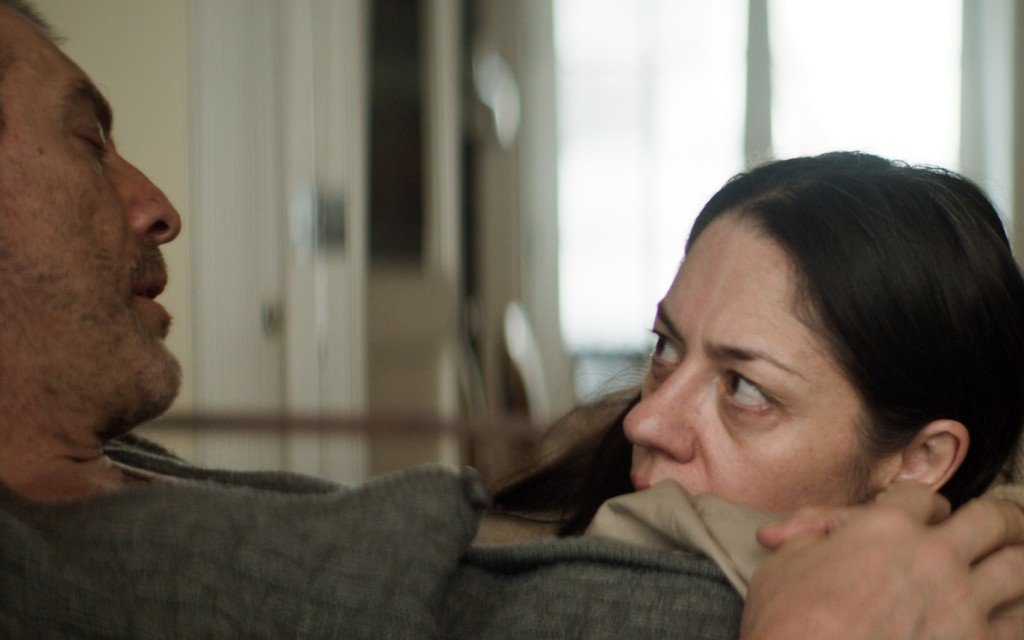 Director Rodrigo Pla employs ingenious voice-over technique. Laura Santullo’s novel is said to be not just confined to the protagonist’s perspective. There are multitudes of characters who convey their experience (in the first person) of living through the little chaos conjured by Sonia –in the form of testimonies recorded during the near-future courtroom trial. In this way, the protagonist doesn’t receive unrestrained empathy and allows being critical toward her decisions. The multiple viewpoints provide breathing space for ethical discussion. Rodrigo Pla deftly incorporates the same idea in his cinematic form. He juxtaposes the witnesses’ trial testimonies through voice-over, while the person is experiencing the incident first-hand. For example, when Sonia accidentally shoots the company’s board member in a sauna, the shot is framed from the perspective of a witness and in the interlaced voice-over, the witness is pointing out the suspect in court. The narrative glides from one viewpoint to another, moving away from the lead for few minutes, to showcase how everyone in the background is a potential witness and how their strict objectivity only limits them to see a victim of corrupted social order as a perpetrator. At the same time, these varying perspectives serves as a critique on Sonia’s behavior and the violence she provokes (it doesn’t celebrate her ultimately inefficient vigilantism). The shift in visual focus is mostly unpredictable. In one scene in the underground parking lot, Sonia speaks to Doctor Vilalba (although nothing is heard) which is shot entirely from within the car of a doctor’s colleague; the life-or-death situation from the far-removed point is seen as mere irritation. The superimposition of voice-over (from future) to what we are witnessing (in the present) sometimes fascinatingly conveys the contradictions in what we see and what we hear (however, in both present and future Sonia remains powerless). Rodrigo Pla truly excels in keeping alive the subjectivity while also designing the narrative through supporting characters’ memories. Consequently, this approach becomes an examination of the statement “an individual is defined by others’ perceptions”. In few occasions, the director employs distorted or partial images to indicate the fragmented looks of all the participants.

Screenwriter Laura Santullo’s portrayal of insurance company bureaucrats was truly effective. In a traditional narrative, these rich individuals would make up for despicable villains. But here they are just uncaring, tired, and ineffectual people. Their humanity is just barricaded within the inviolable fort of apathy and strictly profit-minded pursuits. When threatened with violence the bureaucrats impart inefficient sympathy; inefficient because their fragmented responsibility is inherently designed to deny the just action, while the collective responsibility commingles to commit the wrong activity. Jana Raluy delivers a compelling performance as Sonia. Her character is striped off vanity or annoying self-righteousness or glamor. Although the path she takes is questionable, we can easily relate to her despair, since the kind of insane system that pushes people to their breaking point is in place all over the world. Jana Raluy is an experienced theater artist, but this is her first lead role in a movie. Raluy affixes certain clumsiness to Sonia’s actions, hinting at the character’s deep emotional turmoil. Her pained face effectively depicts the ethical conflicts tearing her inside out.  Sebastian Aguirre’s (played central character in Gueros) Dario was another well-written character. Dario unexpectedly tags along with his mother Sonia. He remains innocent bystander as well as an unwilling accomplice. Dario’s emotional attachment to his mother’s actions perfectly reflects our own participation in the events (we want the boy to be safe & detached as well as help his mother at critical times). Eventually, one must thank Rodrigo Pla and Laura Santullo for not straying from the subtle approach or give in to the temptation of designing a climax bloodbath.

A Monster with a Thousand Heads (75 minutes) takes a familiar, if not a silly premise, and transcends it into a subtly powerful movie about common people’s rage on the bureaucratic apathy. Director Rodrigo Pla’s meticulously realized film-form contemplates how victims become criminals under the cold, judgmental eyes of the society.