Kohei Oguri’s Muddy River (Doro no kawa, 1981) is a wonderfully evocative portrait of childhood which in parts reminded me of Victor Erice’s The Spirit of Beehive (1973) and Rene Clement’s Forbidden Games (1952). Erice, Clement, or for that matter, Truffaut – in 400 Blows – has proved that films about childhood don’t need to be sentimental. Similarly, Oguri is a master craftsman when it comes to imbuing profound emotions within simple visuals, while also subtly exploring the mysteries and misunderstandings that envelopes childhood. Set in Osaka, a decade after the end of WW-II, Muddy River showcases the innocence, emotions, and harsh social experiences that accompany the children growing up in a spiritually and economically crushing society.

Kohei Oguri is an unyielding independent film-maker who has only made six films in his nearly four-decade career, free from the supposed hassle of studio productions. As a film-maker persistently committed to artistic integrity, Oguri constructs images replete with emotions. Shot in black-and-white and based on Teru Miyamoto’s novel, Muddy River tells the story of friendship imperiled by social circumstances. The film received rave reviews from international critics, especially for the restraint shown by a debut film-maker. It also gained a Best Foreign Film Oscar nominee, eventually losing to the powerful German drama Mephisto. 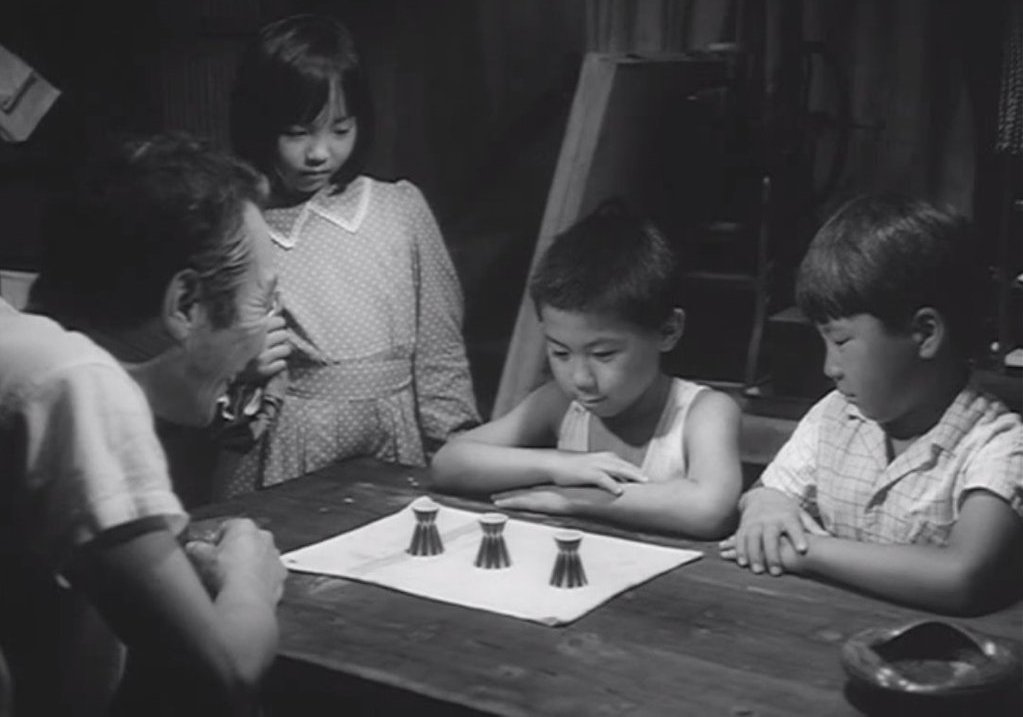 Osaka is one of Japan’s largest industrial cities, and it is said to be touched by the post-war economic miracle. It is 1955, and the Korean War which just ended (1951-54) provided Japan’s industrial base a huge boost, thanks to the American demand. But there are casualties to this hectic pace of ‘development’. They are the economically and socially ostracized individuals who survive along the banks of Osaka’s Kyu-Yodo River. Nine-year-old Nobuo Itakura (Nobutaka Asahara) lives with his parents who run a noodle restaurant in their ramshackle house, situated in the banks of river. Father Shinpei (Takahiro Tamura) who had Nobuo, his first-born child, after 40 years of age wonders what good they have had after all the sacrifices made during  and after war. Yet he feels the need to do better, for the sake of his little son. Furthermore, he is thankful that he hasn’t perished in the scorching hills of Manchuria.  Mother Sadako (Yumiko Fujita) is a kind woman and works throughout the day in their noodle shop.

Related to Muddy River: Pigs and Battleships [1961] Review – A Probing Portrait of a Marginalized Society

Nobuo hears of his parents’ wartime experiences, but still he hasn’t sensed the brutality of the outside world. It all changes when the boy, earlu in the narrative, witnesses the death of a neighborhood horse cart man, his parents’ regular customer whom he affectionately calls ‘uncle’. After a decade of doing exhausting manual labor, the horse-cart man speaks of buying a second-hand truck. But he perishes unexpectedly leaving a wife and a kid. The traumatic incident is followed by the arrival of a dirty little trawler, parked opposite Nobuo’s home. A boy of Nobuo’s age named Kiichi Matsumoto (Minoru Sakurai) and his 11-year-old sister named Ginko Matsumoto (Makiko Shibata) live in the houseboat with their widowed mother (Mariko Kaga).

Nobuo befriends both of them. He particularly roams around the neighborhood with the malnourished Kiichi who often greets Nobuo with a pure smile. They meet in the bridge and spy on the allegedly monstrous carp, living in the muddy bottom. Kiichi asks Nobuo to keep this as their ‘secret’. Nobuo’s parents soon learn about the houseboat, and about their son’s burgeoning friendship with Kiichi. They also receive news of Kiichi’s mother’s profession – prostitute – with empathy and sadness. Sadako invites both the Matsumoto children and treats them nicely. Shinpei impresses the kids with a magic trick. Largely unfolding from the perspective of the children, little Ginko is more aware of her conditions and limitations imposed upon her by the world. It is touching to see Ginko thanking Sadako for her kindness and yet not accepting her gift. And, Muddy River is full of such small, poignant moments which all gradually accumulate to deliver a deeply impactful ending.

Director Kohei Oguri mostly subverts traditional narrative techniques of coming-of-age movies. As I mentioned, it’s a film full of beautiful little moments, in which some sequences might seem purposeless but would add to the emotional tapestry. For instance, the scene Shinpei takes his son to meet his dying ex-wife to Kyoto may seem like a vignette that’s out of place. But the lesson in kindness, Nobuo learns there adds to his sense of right and wrong, particularly when encountering Kiichi’s ‘cruel’ behavior towards the end. In fact, Oguri isn’t simply constructing a narrative but rather imparts memories and strong emotions upon Nobuo which might shape him as an individual.

Like every other great films about childhood, Muddy River achieves its excellence in the way it depicts the inexpressible sadness and trauma felt by the children. It is the inability to convey his pain and sadness which leads Kiichi to resort to cruelty, believing it can keep Nobuo’s attention on him. The boy’s cruelty to crabs also unexpectedly brings Nobuo to uncover the harsh truth regarding his friend’s social condition. Both Kiichi’s teary-eyed look and Ginko’s silent gaze at Nobuo is so unendurably heartbreaking.

Director Oguri lyrically builds the unrest enveloping the quotidian existence of the children through the symbol/metaphor of, water, muddy river, bridge, and the boy’s imaginary monster carp.  In Keiko McDonald’s book, Reading a Japanese Film: Cinema in Context, Oguri is quoted as saying, “…though a child maybe as pure as spring water, it is the mud of humanity, the experience of living, of knowing happiness and sorrow that nurtures him. This is what I wanted to celebrate in my film.” In the film’s review in ‘Forgotten Classics of Yesteryear’ blog, the carp metaphor is fascinatingly described in this manner: “Throughout the film Nobuo and Kiichi catch glimpses of a legendary giant carp that inhabits the murky bottom of the Kyū-Yodo River. Declaring it their secret, it becomes one of the impetuses for their friendship. In Japanese culture, the carp, or “koi,” is a symbol of strength and masculinity that is frequently associated with young children. It is believed that this tradition stems from an ancient Chinese legend wherein carp transform into dragons if they manage to swim upstream and jump over a waterfall located at the Dragon’s Gate. Many try, but most fail. In post-war Osaka, some boys were blessed with enough prosperity to escape poverty and become mighty dragons. But many, like Kiichi, were swept away downstream until all that was left of them were memories. Muddy River is one such memory, resplendent in its beauty, agonizing in its honesty.”

Oguri and his cinematographer Shohei Ando brilliantly focuses on the pathos of simple things, retaining rich human emotions within a shot. At times, Oguri’s powerful grasp of realism without succumbing to melodrama reminds me of the forgotten classics of the great Hiroshi Shimizu. The camera keeps its distance from the children as if tagging along when the kids go about their lives. But director Oguri constantly employs his stylistic devices to depict how innocence is compromised by closer look at the world. Early in the narrative, Nobuo greets the horse-cart uncle with an innocuous smile, and just as soon the director cuts to a subjective close-up shot of the uncle’s deformed ear. This simple image becomes a recurrent motif in the narrative – later, the close-up shot of hole in Kiichi’s shoe – as Nobuo’s growing cognizance of the world often makes him see all the shocking, inexplicable things within it.

The old bridge, the broken-down trawler, and the entire industrial wasteland add meaning to the children’s new emotions and increasing awareness of their surroundings. Eventually, Muddy River is memorable for its universal, timeless qualities. It features scenarios, characters, and emotions that can be transplanted to any time and place. Of course, it would be an uphill task to reproduce the emotional resonance or impact created by director Kohei Oguri.