An abundance of ‘drama’ sits at the center of a household/society which allows people to hire parental affection, in the form of a live-in maid. A less talented filmmaker would approach the drama involved there with the intent to manipulate viewers’ emotions rather than get into the skin of the characters, on-screen. However, gifted Brazilian filmmaker Anna Muylaert invests a minimalist narrative, deft direction and extracts fantastic, low-key performances to keep away from the obnoxious elements of a typical maid’s story. Muylaert’s The Second Mother (2015) (“Que Horas Ela Volta?”) retains all the general ideas that come with a maid’s story: social realism, social stratification, drudgery, etc, but at the same time the narrative brims with a singular quality, which never becomes didactic.

The movie’s opening scene is composed of two static shots: Maid Val (Regina Case) shows a kind of affection and attention to little boy Fabinho, whose mother is always busy; then Val talks on the phone to her own little daughter, whom she has left for this job. The woman is facing away from the camera, so we can’t clearly see her emotional pain and the camera observes her from a distance, taking in the whole surrounding environment.

It is the kind of set-up director Muylaert often uses in the narrative. In the next scene, the Fabinho we saw has grown up to be a teenager (Michel Joelsas) and he has just got up and complained about his life to Val, working in the kitchen. Val, with her humorous, out-loud comments (about an empty ice-tray in the refrigerator) and affection does her job as the surrogate mother. Once again the shot encompasses the whole of kitchen to indicate to us who Val is: an attendee, confined to small living quarters. Be it the kitchen or swimming pool or a hallway, whenever we see her, she is either cleaning something or outpouring absentee human warmth.

Fabinho’s mother Barbara (Karine Teles) is a hard-working woman, while the household’s patriarch Dr. Jose Carlos seems like a depressed shut-in, who had inherited all these affluent properties from his father. There’s a birthday party (Barbara’s), the family always eats together their dinner, and so there is a semblance of happiness. And, even that disappears as Val’s estranged daughter Jessica (Camila Mardila) comes to stay with her mother, to take entrance level exams for an architecture course at the same esteemed college, where Fabinho also wants to enroll in.

Val has asked her bosses to let Jessica stay in the servants’ quarters until she finds a place. But, cocksure Jessica, who lacks the subservient attitude of Val, freely speaks with the family and even gets to stay in the sophisticated guest room. Val has inherent guilt since she had surrendered Jessica to relatives, whereas the headstrong daughter subtly breaks up all the unspoken customs of the household, bubbling up niggling class prejudices. 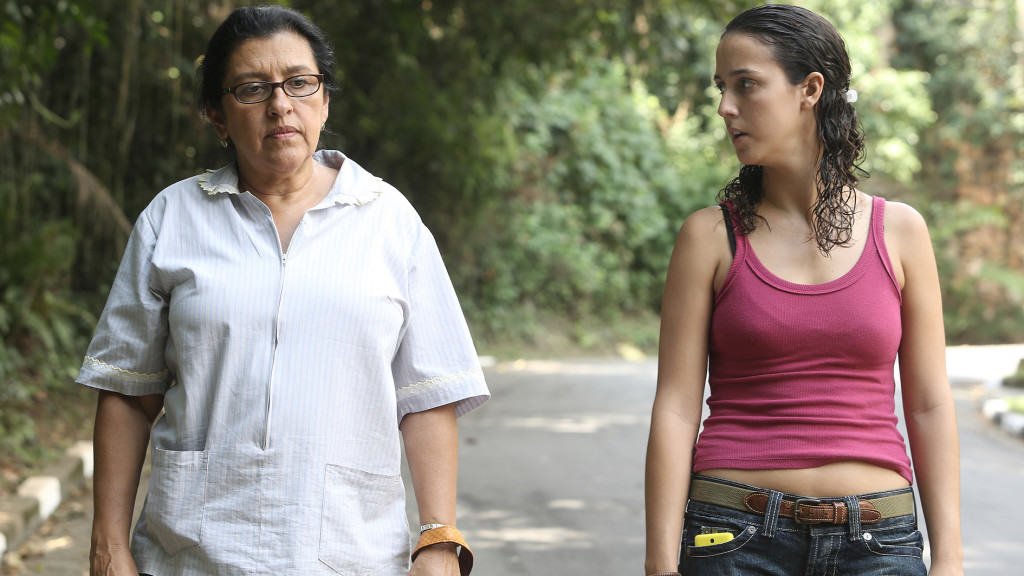 Director Muylaert and cinematographer Barbara Alvarez has an eye for detail to stage the nuances of cold class war without ever allowing cacophony of argumentative voices to take over. The camera perfectly trails Val as she moves to serve the thankless people. Many of the initial static shots unfurl in Val’s domain: a hallway with closed doors or kitchen. In the scenes, when Val serves breakfast or dinner, the detached frames show how there is an invisible boundary between the kitchen door and the dining table.

However, when showcasing Jessica who isn’t dedicated to confirming the unstated rules, the camera goes a bit closer to capture the reactions of other people in the household, especially Carlos and Barbara. The matriarch and patriarch express different kinds of emotions to Jessica’s subtle invasion of the household’s twisted political economy: Carlos sees the young girl as a chance to live again, while Barbara is driven by a typical grudge. These are the kind of narrative elements, which could be easily used to either demonize the family or to reduce them into caricatures. The director does neither, as she draws or anchors each character with their own individualistic expectations.

There’s some ridiculousness in the way Barbara and Carlos behave to Jessica’s arrival, but those aspects don’t reduce them to white, stupid rich people. We hear nuggets of details about the rich family’s past which indirectly indicates how they are also the victims of the system (or their nation’s autocratic past). Director Muylaert tries to extract enough humor from the snobbery (for example, in the scene when Val presents modern thermos and coffee-set to Barbara for her birthday), and the humor works because of Regina Case’s astonishing performance.

The constrained social status imbues sadness and frustration in her face, yet she shows an earthy sense of humor & warm-hearted nature which doesn’t allow her to be an archetype or a mere social symbol. She moves like a bundle of energy in those tender moments of affection (directed at Fabinho) or while celebrating little victories (look out for her range of emotions, after learning about Jessica’s exam result). A little heightening of the gestures from Case would have turned Val into a character of soap opera.

For The Second Mother (2015), Director Muylaert has suggested Kleber Mendonca Filho’s masterful moody take on class hierarchy “Neighboring Sounds” (2012) as her source of inspiration. The clever symbols in the narrative like chocolate ice cream, swimming pool reminds us of the similar sort of abundant symbols in Filho’s movie. But, unlike Filho’s Haneke-like execution, Muylaert strives to impart a warm and optimistic feeling for making it more accessible to the viewers. As a cinephile, I felt “Second Mother’s” little sentimental endnote, less impactful than the daring closures of “Neighboring Sounds” or Lucrecia Martel’s “La Cienaga” (2001). But, still, the crowd-pleasing, heartwarming ending doesn’t feel contrived.

The Second Mother (2015) (112 minutes) impeccably works both as a thoughtful character study and as a treatise on the socioeconomic cold war. The terrific performances and restrained direction bestow a charmingly immersive movie experience.